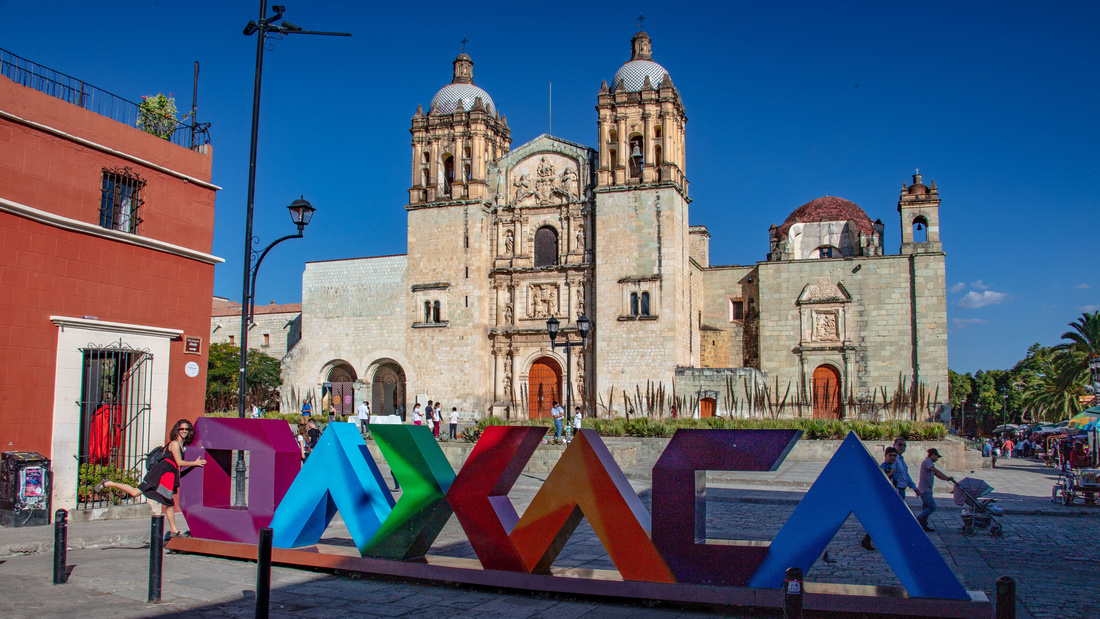 The last time you heard from us, it was November and we were in Sweden. Afterwards, we made a stop in Houston and made our preparations for our next adventure to Oaxaca, Mexico. We thought it would be useful to have some Spanish under our belts when we start traveling in South America. 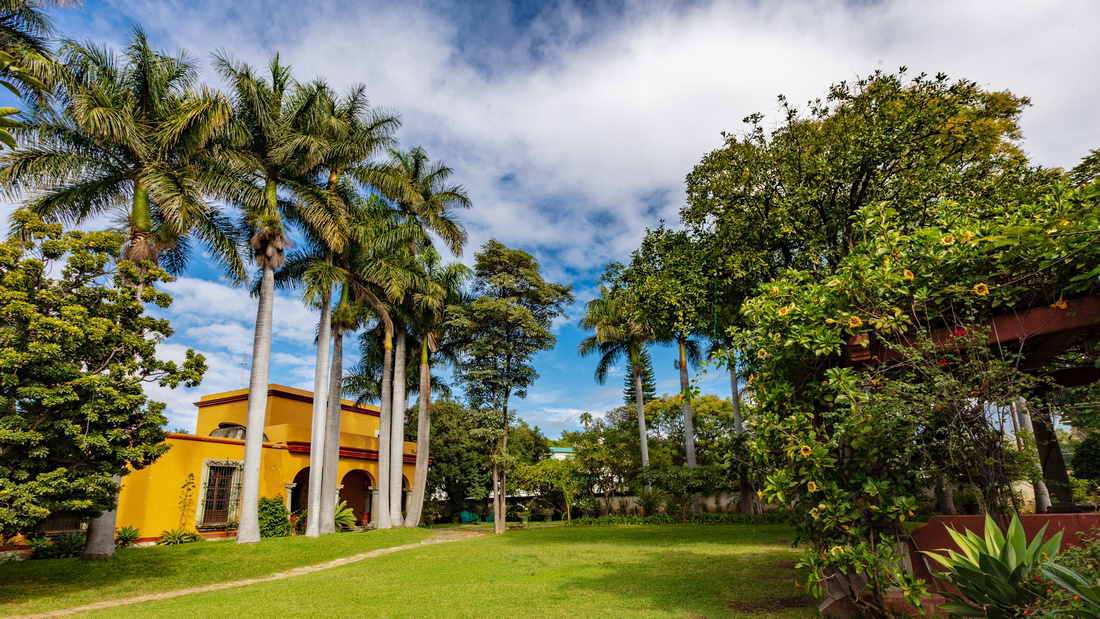 We signed up for four weeks of intensive Spanish classes in Oaxaca and we got fully immersed. Three hours of class time + one hour of conversation Monday to Friday; then two hours of cultural activities Monday to Thursday. By the time we were done for the day, we were exhausted and got to go home to our homestay. Our host mom spoke only Spanish, so the practice continued.  We were very fortunate; our host Mariela was really sweet and an amazing cook. She made us delicious oaxaqueño breakfast every morning and occasionally when we had lunch at the house, it was her family recipe of diverse delicious meals. So, we spend our days, learning Spanish and eating yummy foods. 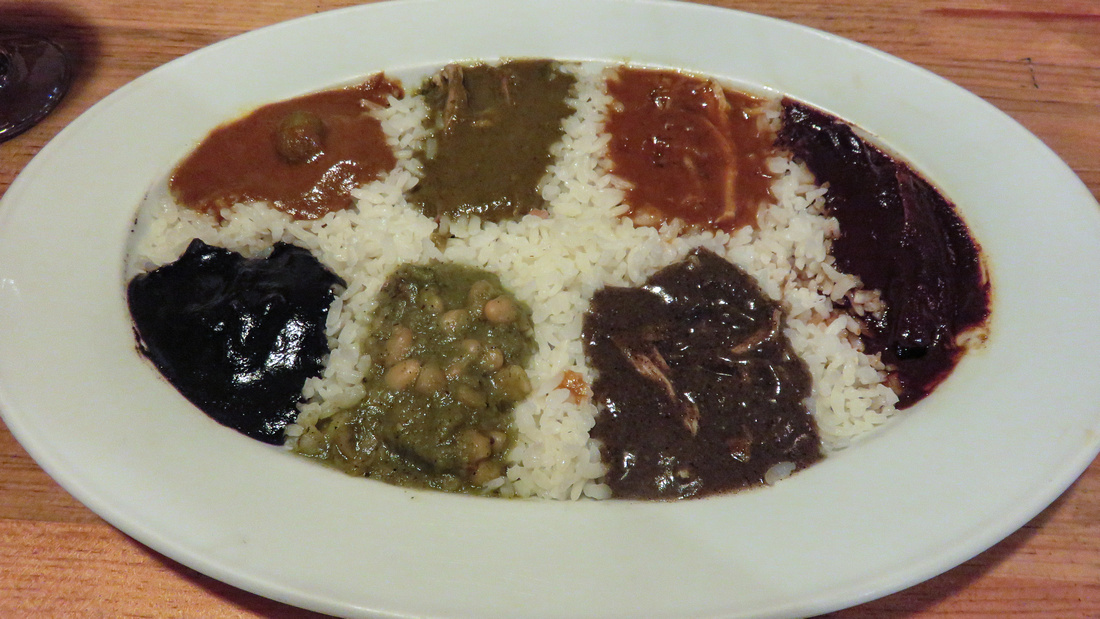 The Seven famous Moles of OaxacaA delicious treat from Mark

On the weekend, we did several outings.

Monte Alban – An archaeological site and one of the first large settlements in Meso-America. It was settled about 500 BCE, and its peak period was about 200 BCE – 500 CE. They don’t know much about the settlement due to lack of written records. Different archeologists have different estimation of how many people actually lived there. Nobody really knows.  The Zapotecs that settled on Monte Alban flattened the mountain using only stone age tools.  Most likely they choose the place because it was easy to defend with great views of the Oaxaca valley. 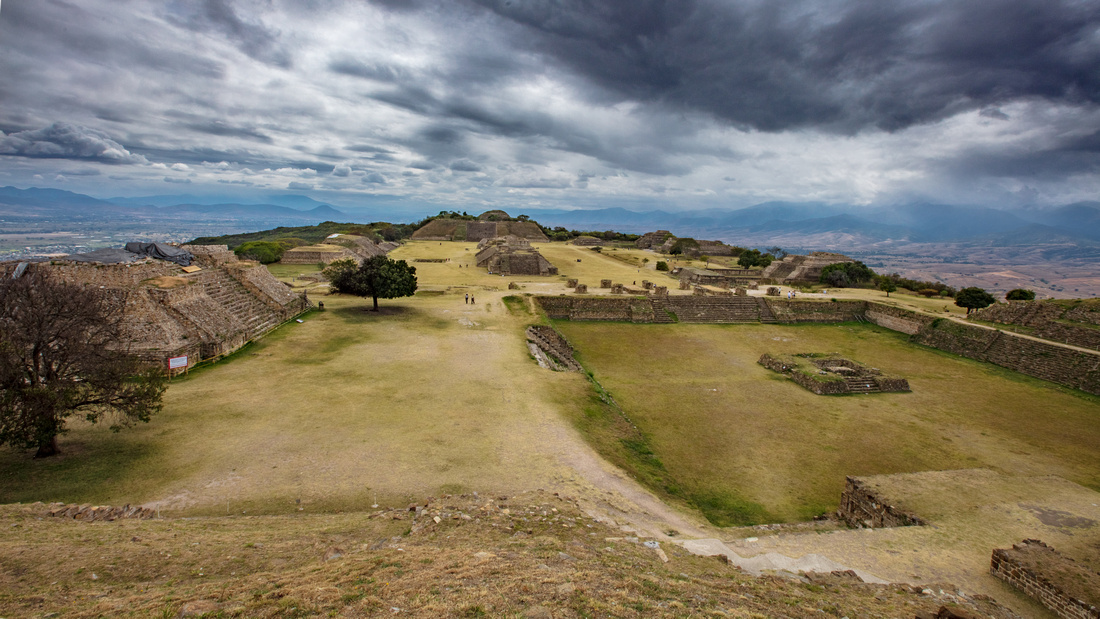 Mitla - The second most important archeological site in Oaxaca after Monte Alban and considered the most important of the Zapotec culture.  What makes Mitla a unique site is the elaborate and intricate mosaic and geometric designs that covers the top of each wall. After Monte Alban decline, Mitla became the center for religion and culture. 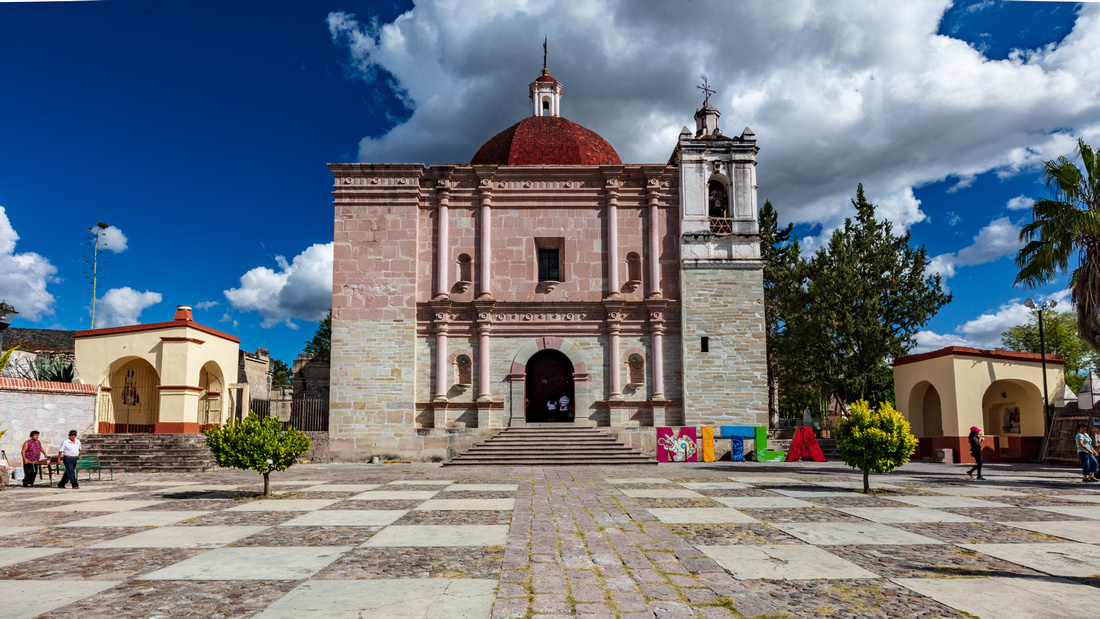 Yagul – Another archeological site. Much smaller than Mont Alban but larger than Mitla. Much of the walls were well preserved and the ball court was in good shape. We were able to hike up the cliff and have a fantastic view of the entire site. According to our guide one of the few places where Zapotec and Mixtec cultures where mixed. 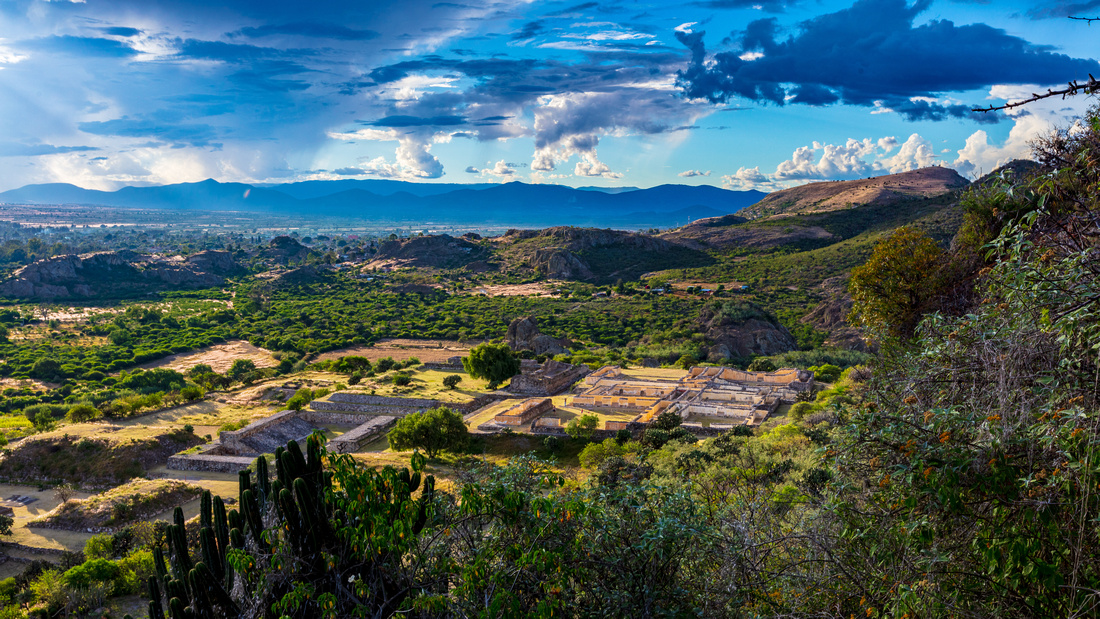 Hierve el Agua – Beautiful site of a petrified waterfall. We did the loop hike in the hot sun and enjoyed the waterfall from different perspectives. The pools above the cliff are perfect for some photo opp. 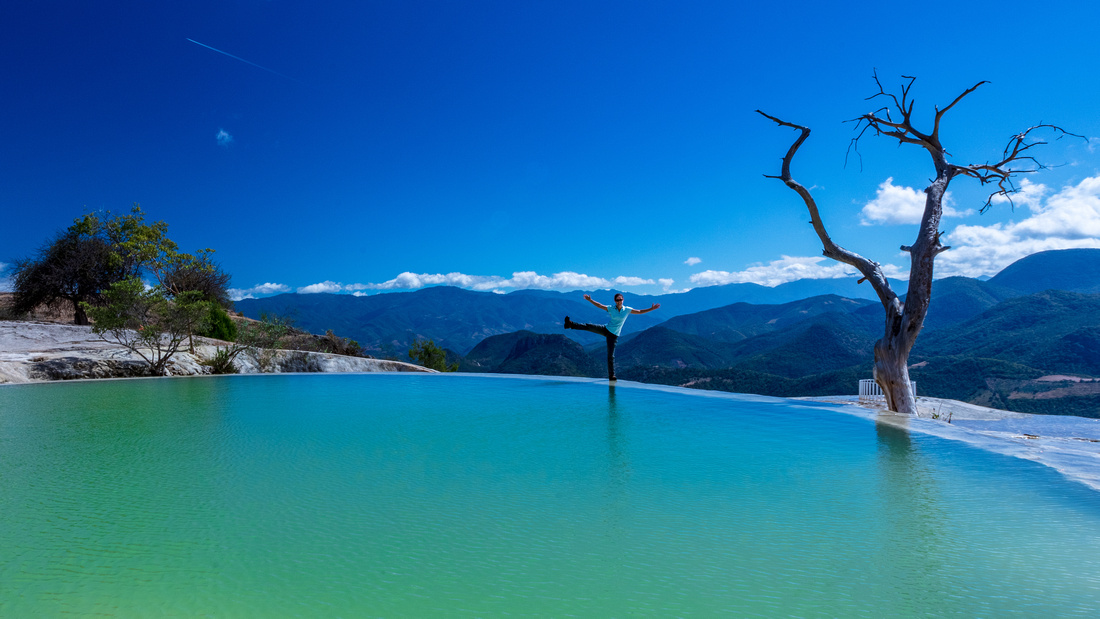 I had to look up in Wikipedia for a better description of the rock formation. The site consists of two rock shelves or cliffs which rise between fifty and ninety metres from the valley below, from which extend nearly white rock formations which look like waterfalls. These formations are created by fresh water springs, whose water is over-saturated with calcium carbonate and other minerals. As the water scurries over the cliffs, the excess minerals are deposited, much in the same manner that stalactites are formed in caves. One of the cliffs, called the "cascada chica" (small waterfall) or the Amphitheatre, contains two large artificial pools for swimming as well as a number of small natural pools. 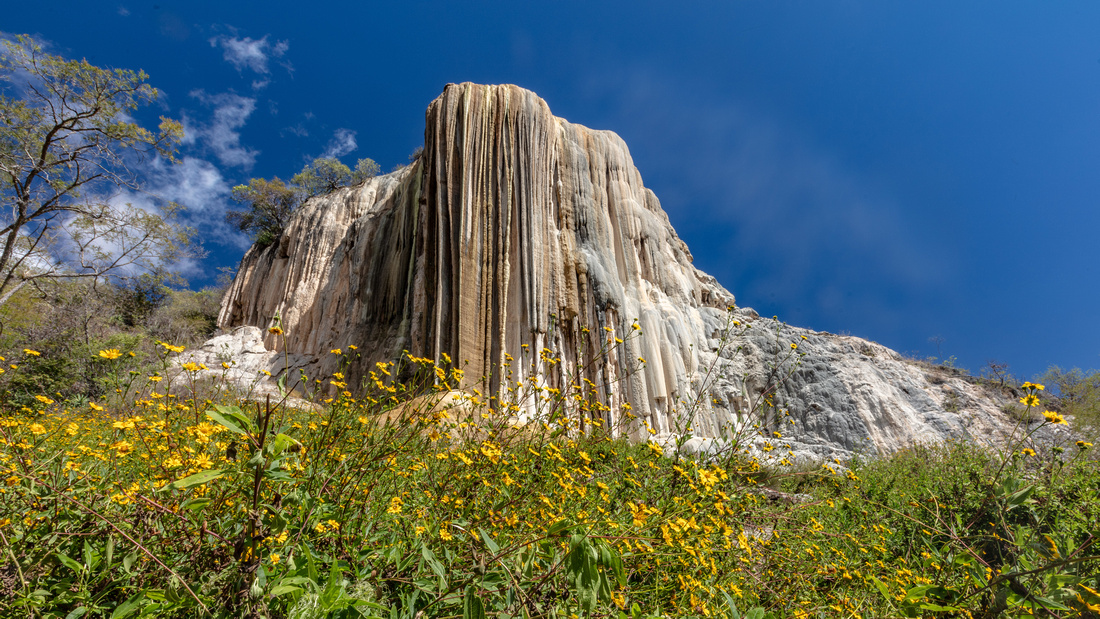 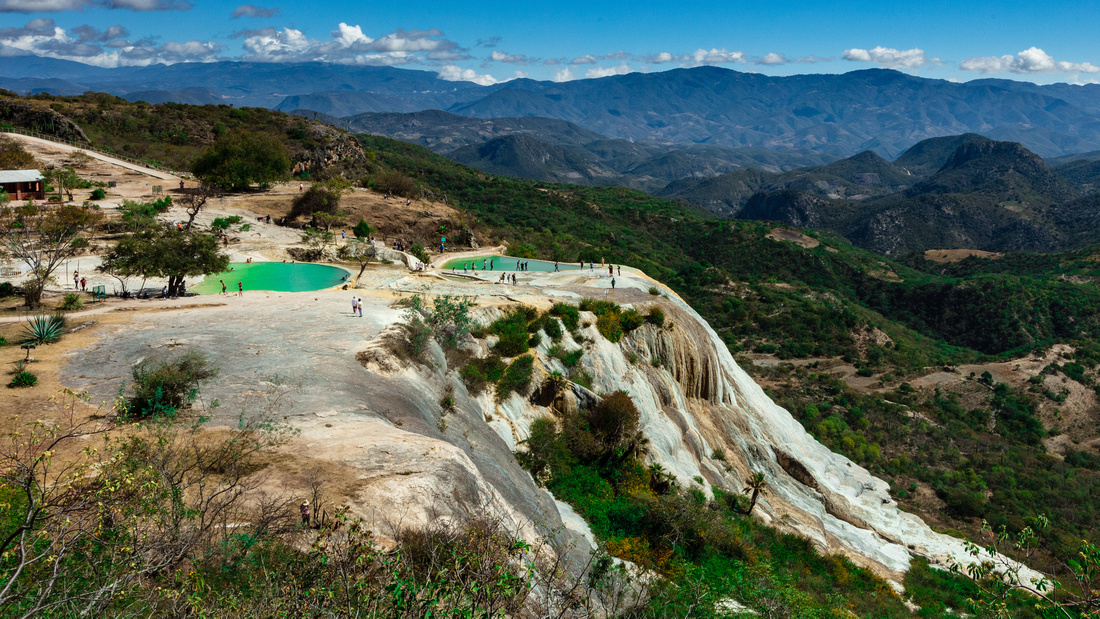 City of Tlacolula - We went on a Sunday to check out the market. It was huge, and they sold just about anything you might need from food (readymade, produce and live poultry) to clothes to household goods, and even some souvenir stuff. 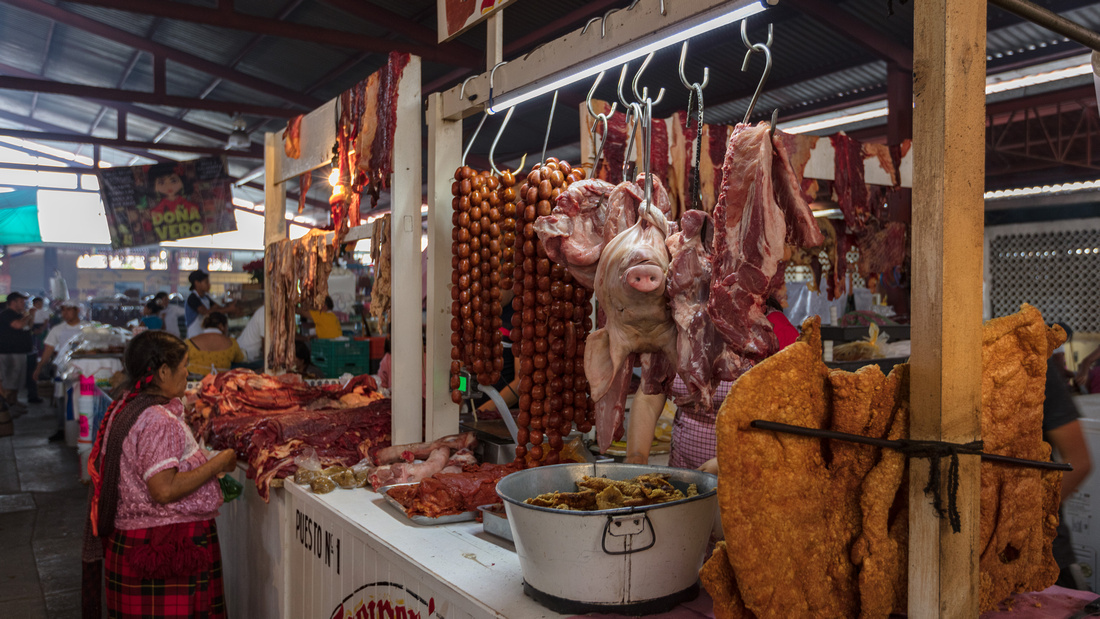 Tlacolula MarketBad day to be a pig

San Miguel del Valle and Teotitlan del Valle – two villages that we visited with the Fondacion En Via. We met with several of the women who receive microloans from the fondacion and they shared with us their craft, their passion and their dreams for the future. It was interesting to see how they lived and what they do for a living. They each specialized in something different: weaving, embroidery, hotel & restaurant industry, chocolate making and lots of handmade materials. 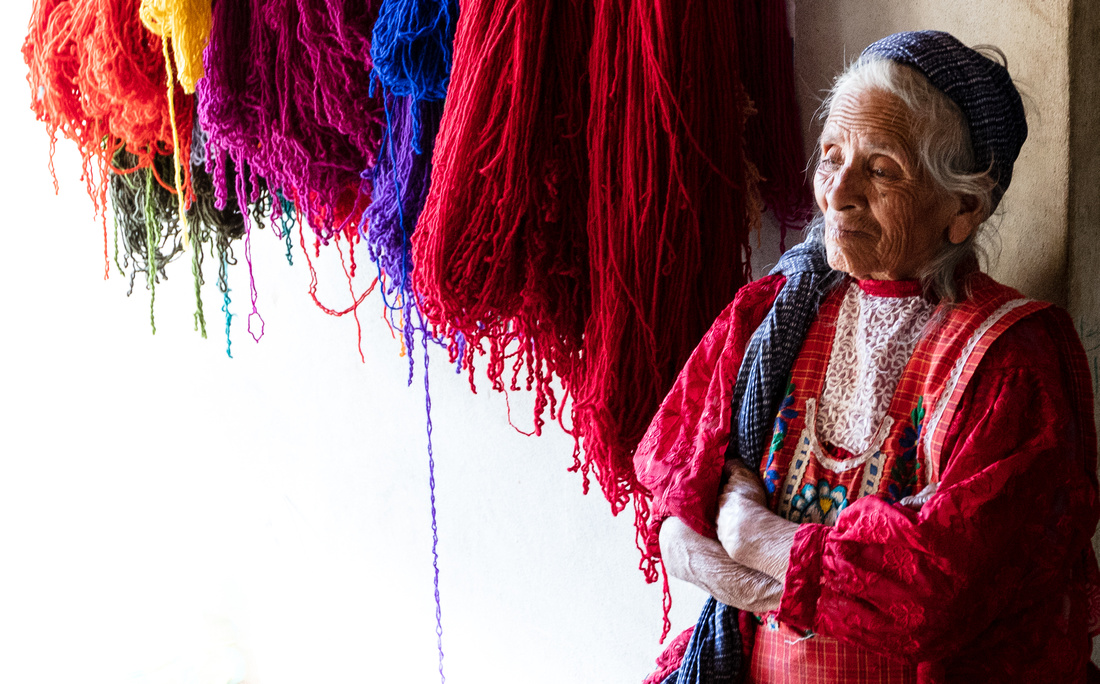 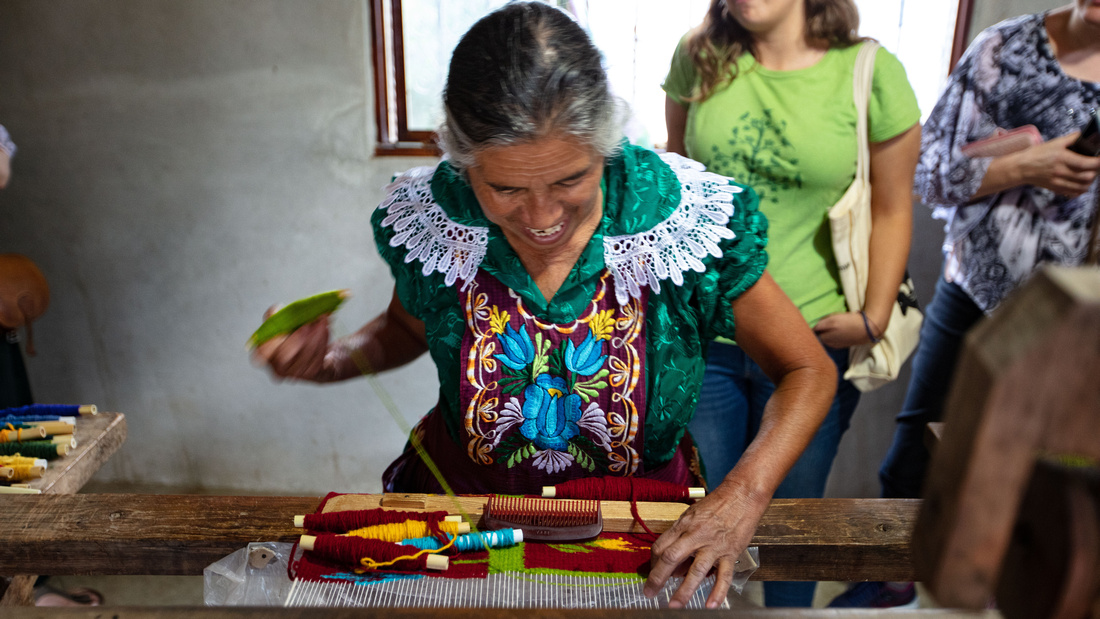 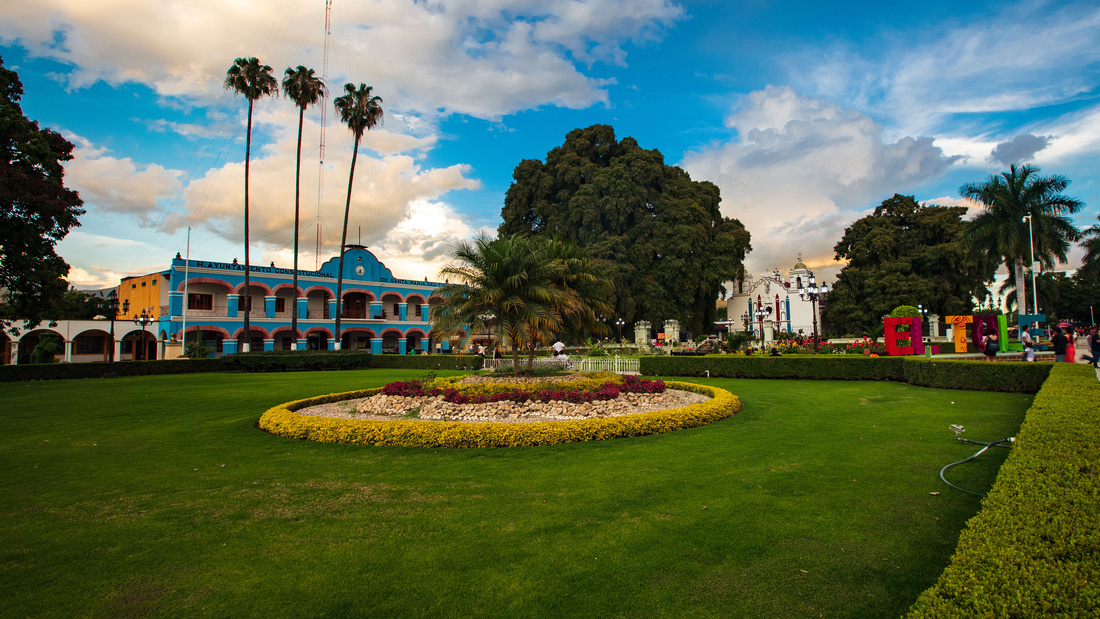 We also visited a couple small villages where the names were unknown to us, but we got to see the gallery and workshop of both the Alebirje (brightly colored sculptures) and Barro Negro (Black pottery). 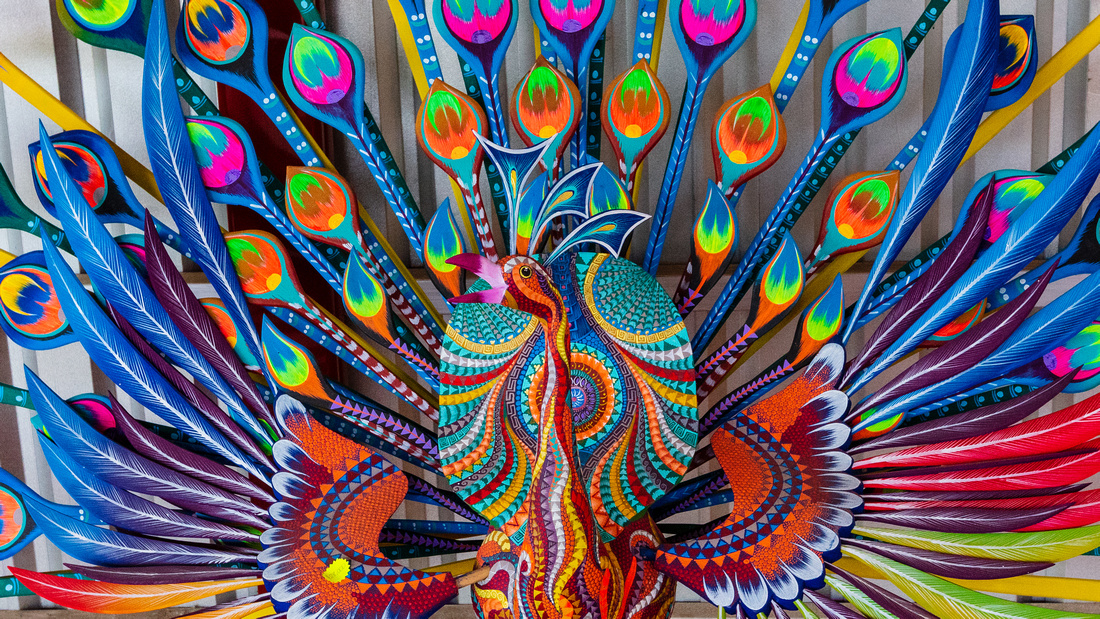 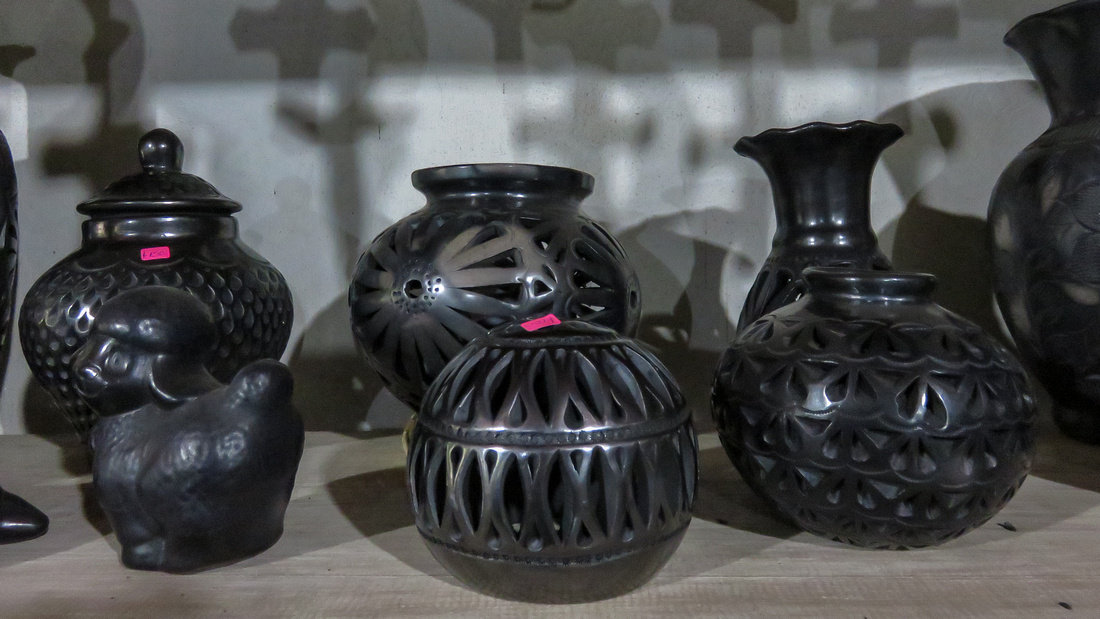 Barro NegroNo it is not glazed

Overall, we loved Oaxaca. We had our love hate relationship at times but isn’t that true for every place in the world? Oaxaca is about 5,000 ft above sea level – about the same as Denver. The climate was just perfect but there was a bit of pollution, mostly from the cars. The streets were clean, people were friendly, and the town had a really good vibe. Walking around in Centro we felt very safe and there was always something fun happening in the Zócalo– the main square. Many locals came out to hang out with their family or friends, chilled on the benches, or strolled, or listened to music, or enjoyed some of the many street food vendors. 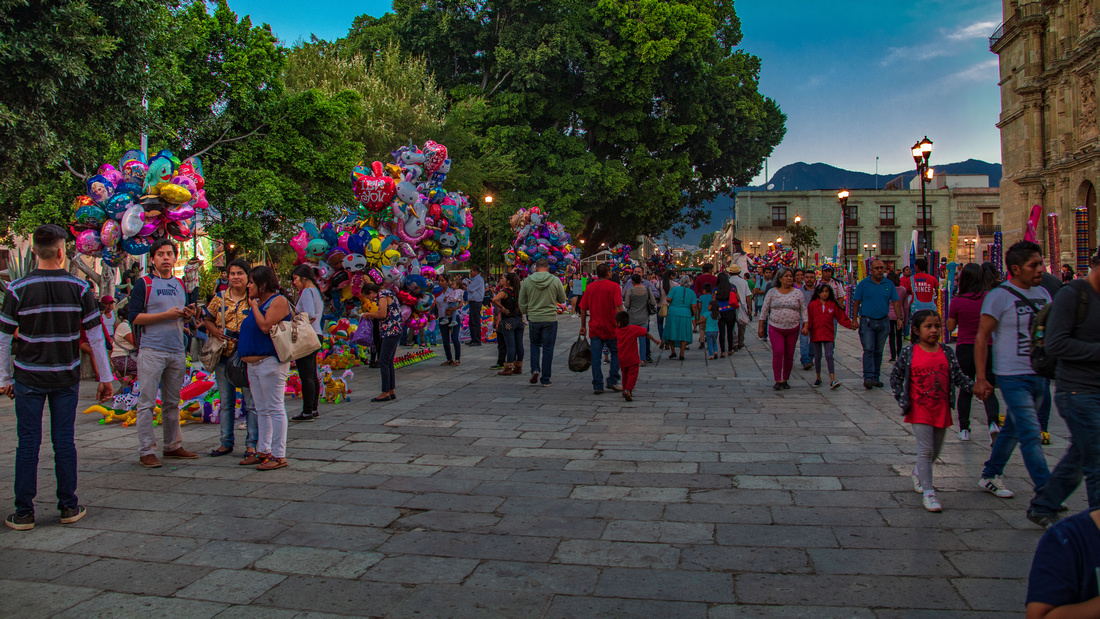 One thing that amazed us was the numerous processions they had, the most common one was the wedding. Wedding parties would walk down the streets with giant papier mache puppets, marching band, dancers with fruit baskets on their heads and a cop (or two) that would block the streets so that they can march on. You could hear the music blocks away and it was fun walking along or watching them pass. Another procession/ fiesta we got to see was the Fiesta de la Virgen de Guadalupe. It’s a big deal in Mexico. Fireworks went off at 5pm at the church, people marched around the city and then went to mass. Mass was offered all day long. Kids were dressed in traditional costumes and boys dressed up as Juan Diego. The tranquil park near our house was converted into a massive fair with amusement rides, food vendors, pop-ups and lots of music. Wedding processionOaxaca style

If you have never been to Mexico, you probably think of Tex-Mex as Mexican food but there is so many more variations. It’s amazing how many different ways they can prepare corns and beans. A few things we enjoyed and will miss:

·        Entomatadas - Tortillas stuffed with quesillo, covered with a tomato-based sauce and topped with fresh cheese

·        Mole Negro – Our host made this sauce with 30 ingredients. We tried it in the restaurants but hers was the best!

·        Huitlacoche Corn Fungus Quesadilla – mushroom that grows on the corn husk. Never heard of it before but delicious.

·        Chapulines – (Grasshoppers) – if you don’t think about it, they are little spiced delicious crispy thing but upon close investigation they do have legs, heads and antennas.

·        Tamales – everyone knows about these. But our favorite were made by our host – the dessert version with milk, butter, cinnamon and sugar.

·        Calabazas Soup – zucchini soup made with the zucchini, its flower and its leaf.

We also tried varieties of fruits some new to us and some that we have not had in a long time: Cherimoya, Mamey, Zapote, Guanabana. 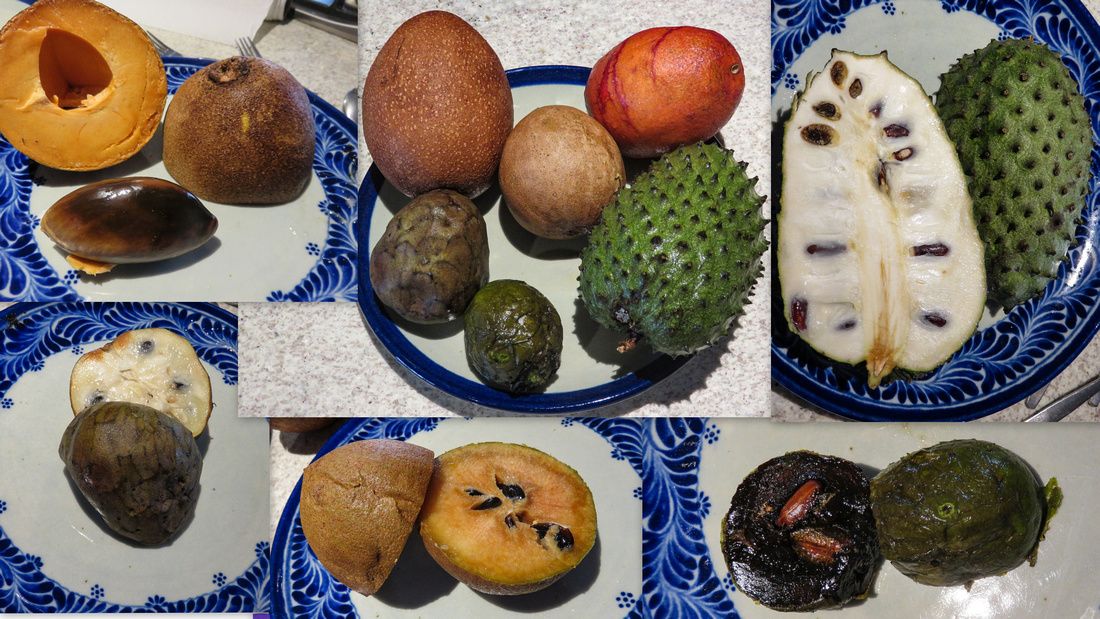 During our stay, we are grateful to have made lots of new friends from all parts of the world (Australia, Canada, France, Japan, Turkey, US) and we had the great pleasure of friends (Bill H, Bill M. and Mark S.) being in Oaxaca at the same time.  We really enjoyed sharing our time with them. I hope we’ll be able to see more friends during our adventures. It definitely makes it more special. 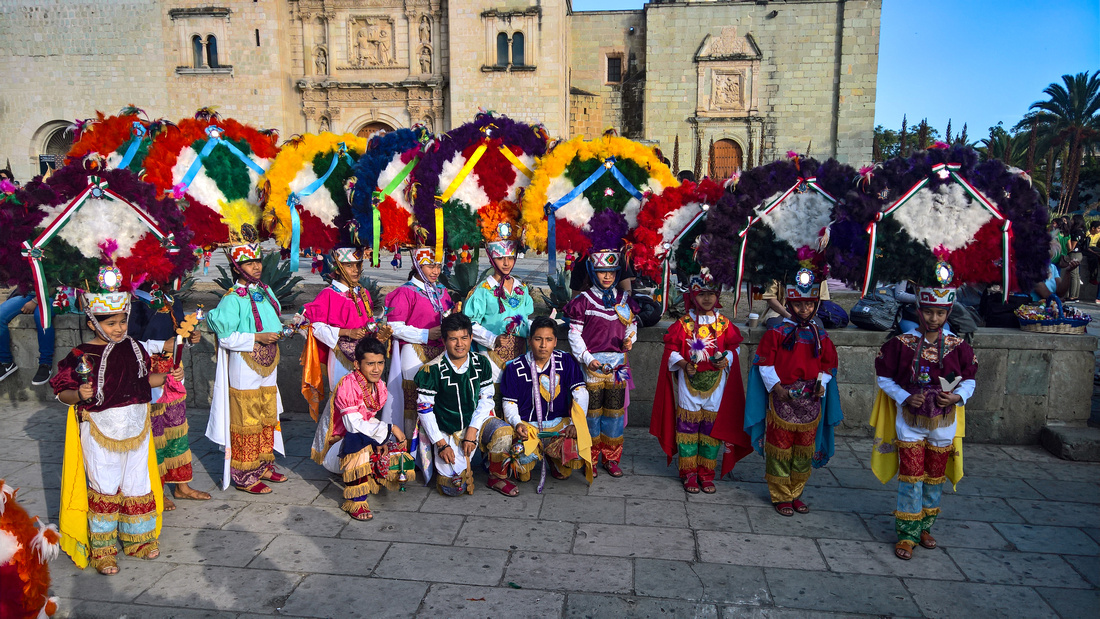 Our next stop is Buenos Aires, Argentina. We’ll be staying at least 2 weeks (maybe more if we like it) before heading to Patagonia, Mendoza wine country, and Iguazu falls. After Argentina, we are aiming for Peru, Chili and Bolivia. We haven’t decided on the order yet. If you are planning to be in any of those places between January and April, let us know. 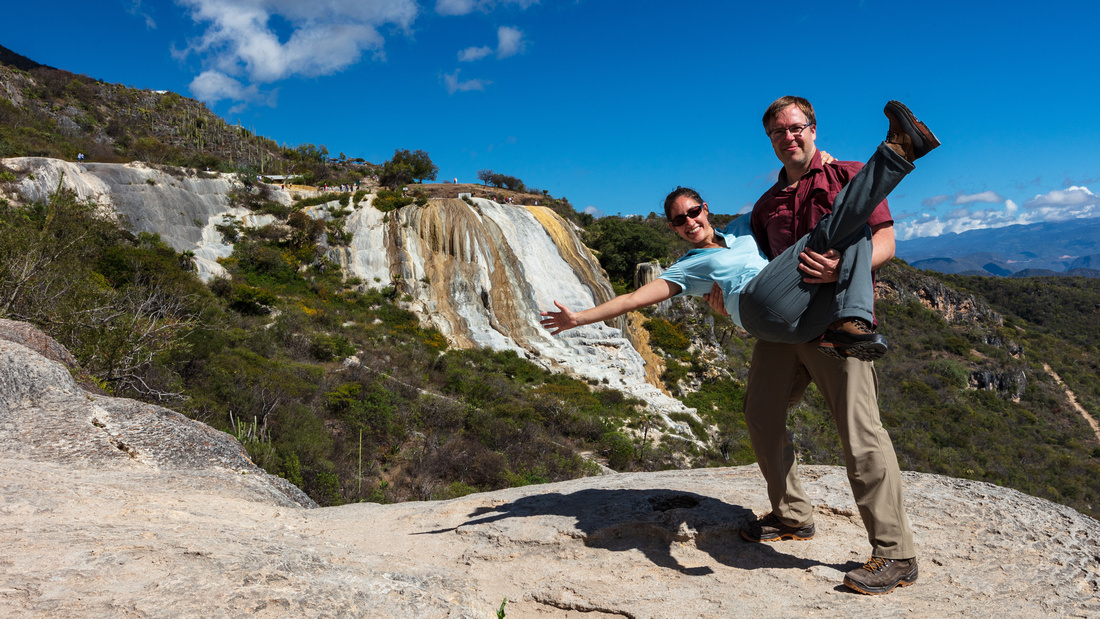 If you have any thoughts/ recommendations of places to see, visit, neighborhoods to stay or to avoid, please send them our way.

Wishing you and your loved ones a Merry Christmas and Happy New Year!

Mina(non-registered)
Congratulations to you all
Mina(non-registered)
Congratulations to you all
Marie Maurannes(non-registered)
Great pictures. Makes me want to travel right now!
David(non-registered)
Great pics as always, especially love the one with both of you in it... V looks thrilled, S not so much... maybe you were waiting a while for the timer to go off! Looking forward to more pics for my virtual world tour!
Randy & Kristin(non-registered)
Amazing photos and stories as always! Looks like you're having a wonderful time. Wishing you continued safe travels!
No comments posted.
Loading...
Recent Posts
Sun sets on our travels! Sayonara Japan Along the Seto Inland Sea, Japan Osaka, Japan A week in Taiwan Vietnam - Hanoi & Tam Coc Thailand, the land of smiles Midsummer in Sweden Buenos Bergen, Norway Baustelle & Stau - Road Trip to Germany
Keywords
Argentina Sweden Osaka Buenos Aires Chile Asuka Danjiri Fushimi-Inari Kendo Kofun
Archive
January February March April May June July August September October November December
© Terralinda
Powered by ZENFOLIO User Agreement
Cancel
Continue