While we were in Buenos Aires, Vanessa had the pleasure of meeting Dag a fellow tango dancer from Bergen, Norway.  At the time, he told her about a tango event in Bergen starting late June. As we talked about our ideas, we thought it would be a good place for a stop on our planned Nordic road trip. We would then also visit our common friend Boris in Bergen, who rightfully claims the responsibility of us meeting in the first place.  Additionally, another longtime friend we also know from Houston, Maud, was able to join us! Reunion!!!  Our plans were coming nicely together.

However, things do not always go as planned and the last few months we have over and over been reminded of the need to be flexible. First our masterplan was changed. Originally, we had planned to spend six months in the Nordic & Europe. But as we were denied an extended tourist visa, we were restricted to the normal 90 days Schengen visa.  The absurd visa experience is a tale of its own. Then we counted on good weather to do the road trip and to camp. But the beautiful spring weather had also turned into an extra rainy Scandinavian summer. Hence, the road trip turned to train and bus directly to Bergen. Luckily, the train ride from Oslo to Bergen is beautiful with both mountains and fjords. 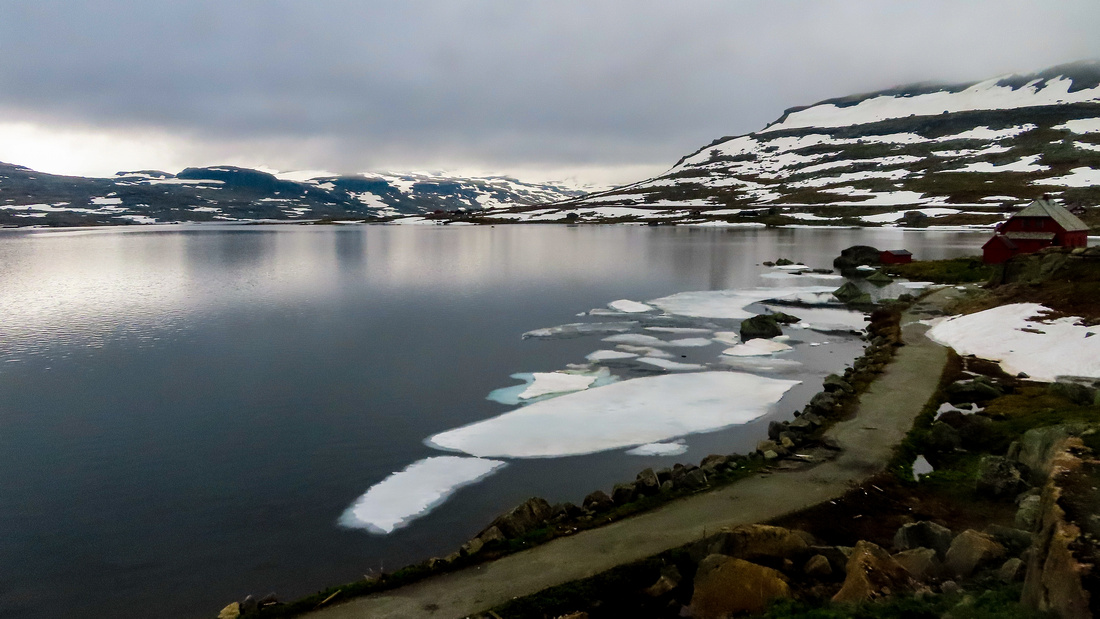 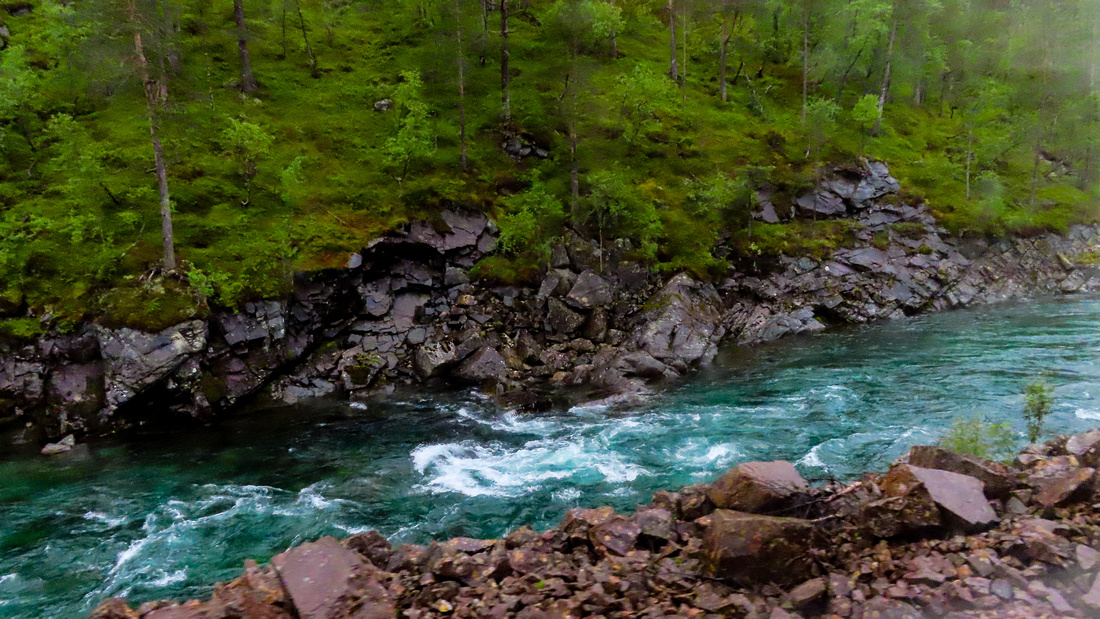 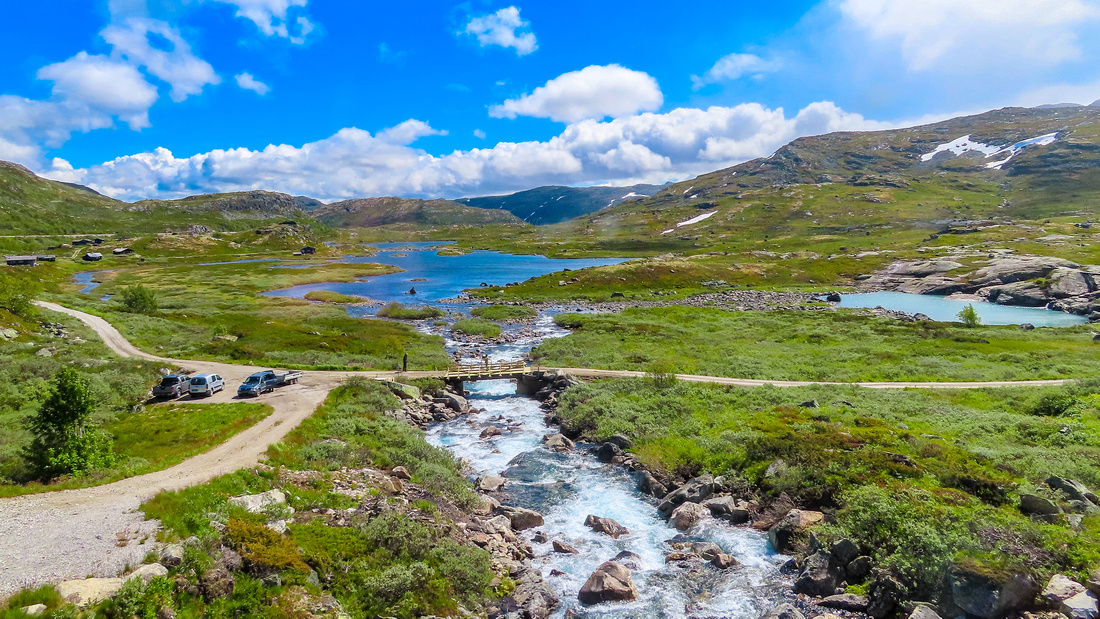 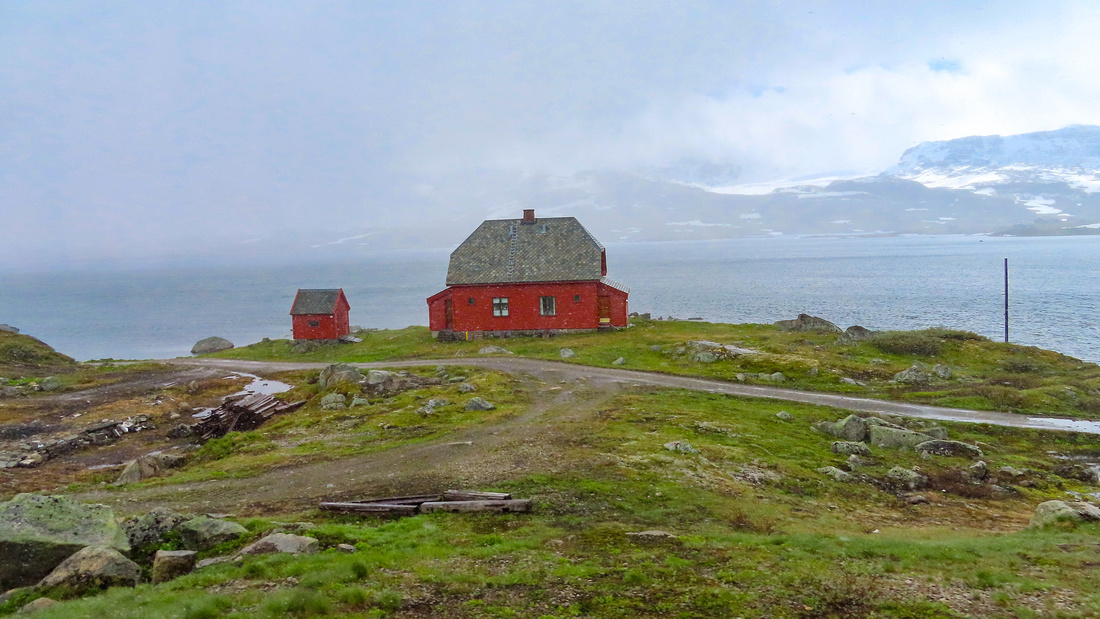 View from the trainFrom Oslo to Bergen, it was rainy, snowy, and sunny. 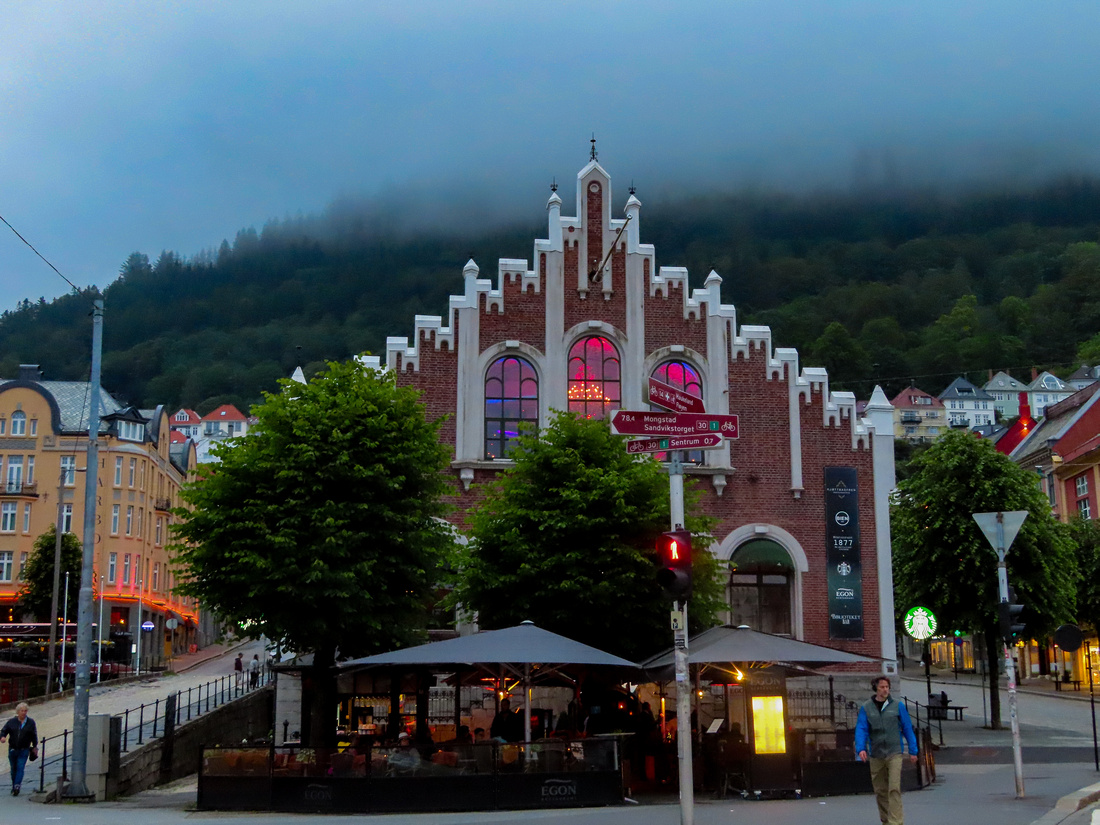 The old library in Bergen, now restaurants and bars

History claims that Bergen was founded in 1070 CE by King Olav Kyrre but modern research indicates that trading settlement existed half a century before. It also served as the capital of Norway to 1299 CE and was the largest city in Norway until 1830. For 400 years starting in the mid-13th century, Bergen was an important Hanseatic trade center for dried and salted cod, and the German quarters called Bryggen is protected as a UNESCOs world heritage since 1979. 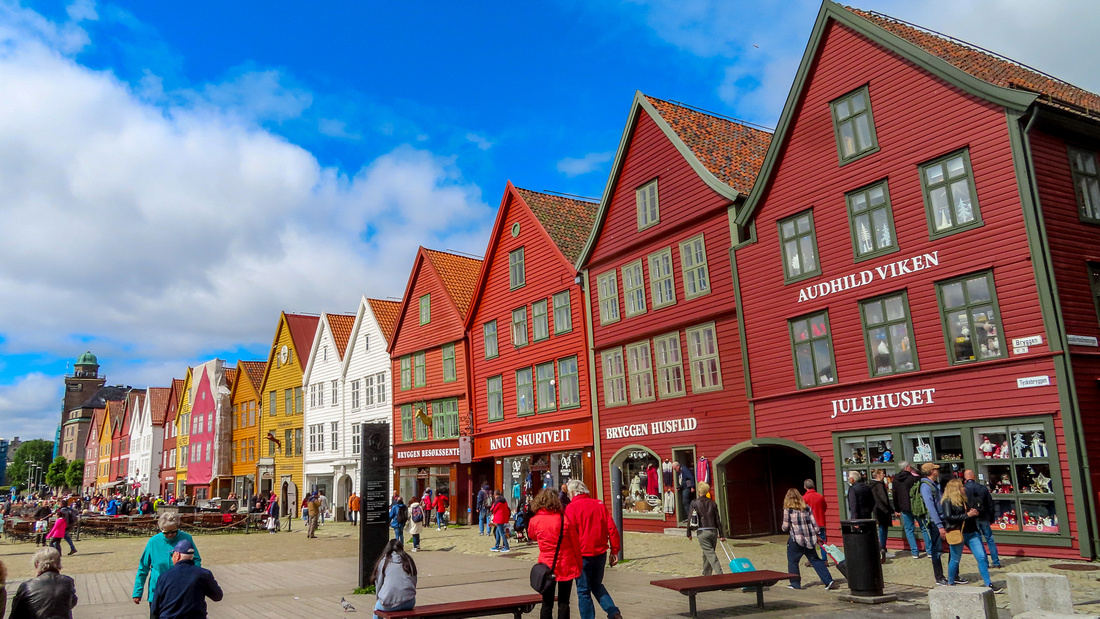 Before Maud arrived, we wandered around the city, taking lots of pictures and hiked up to Mt Fløyen, just 3 km (1.8m) from the city and enjoyed a view of the city. 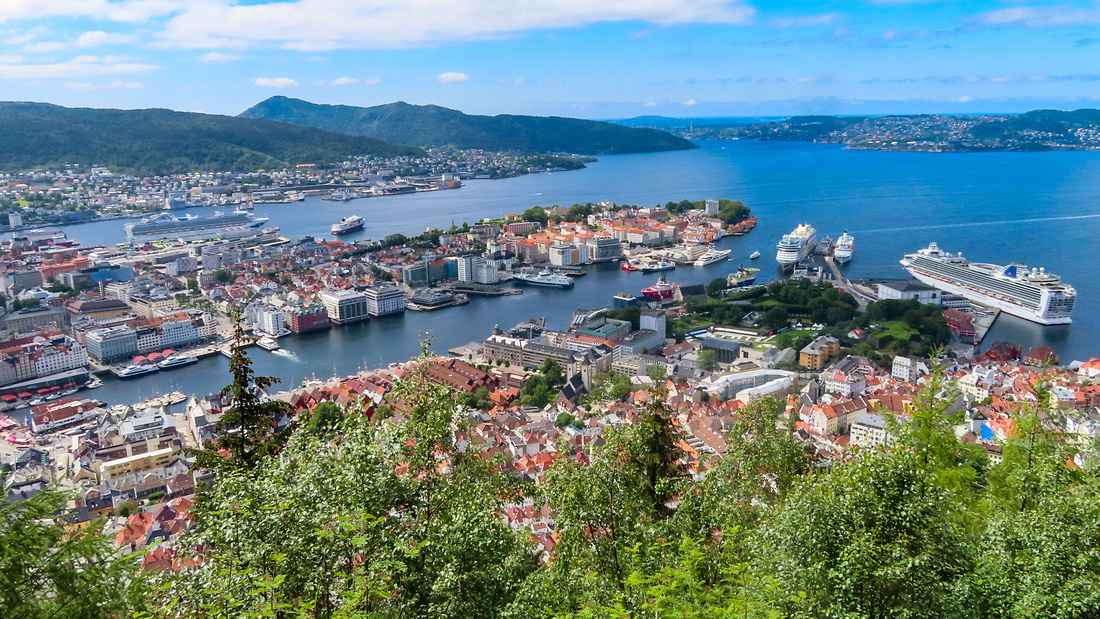 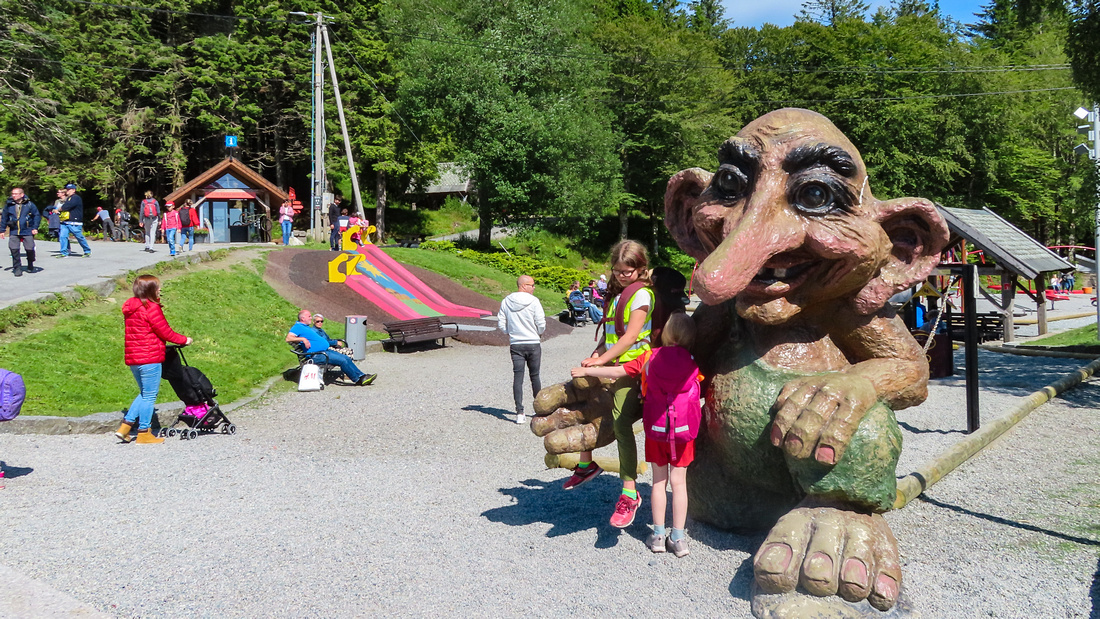 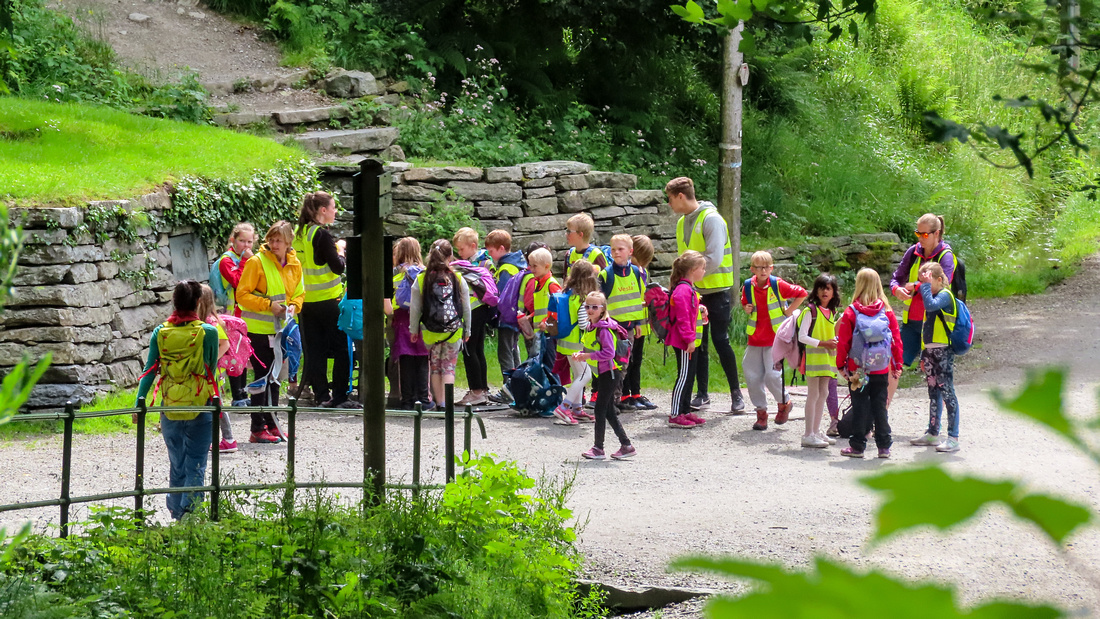 The yellow vests are getting ready 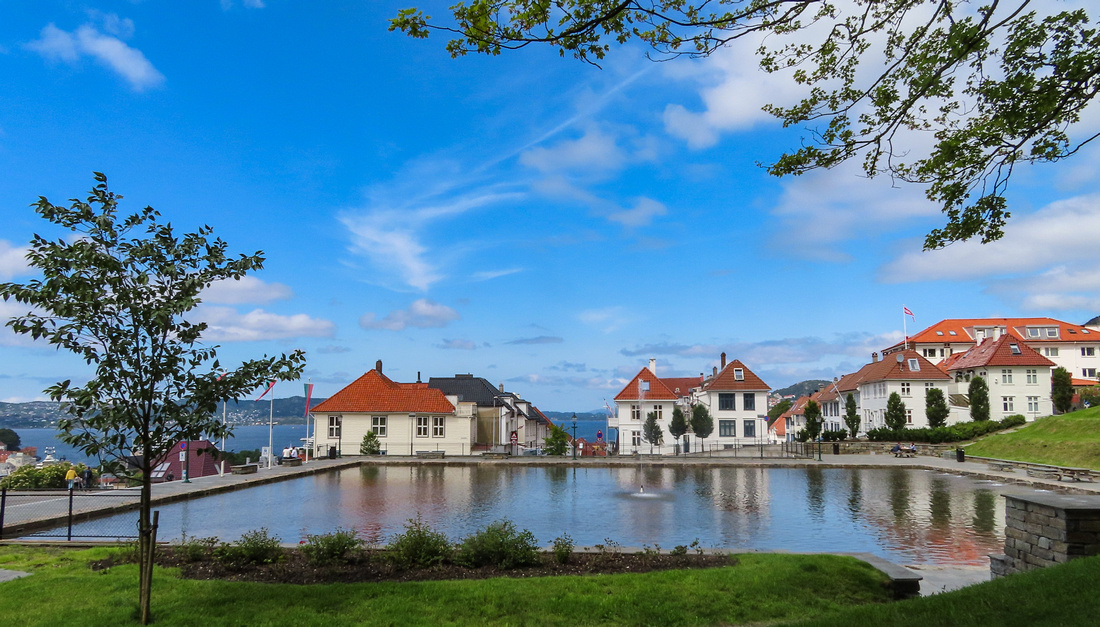 While Vanessa and Boris were resting after a late night of dancing, Maud and Soren hiked 13 km (8 miles) from Mt. Ulriken to Mt. Fløyen. It was supposed to be the best weather of the week, but they were reminded that mountain weather can change rapidly. 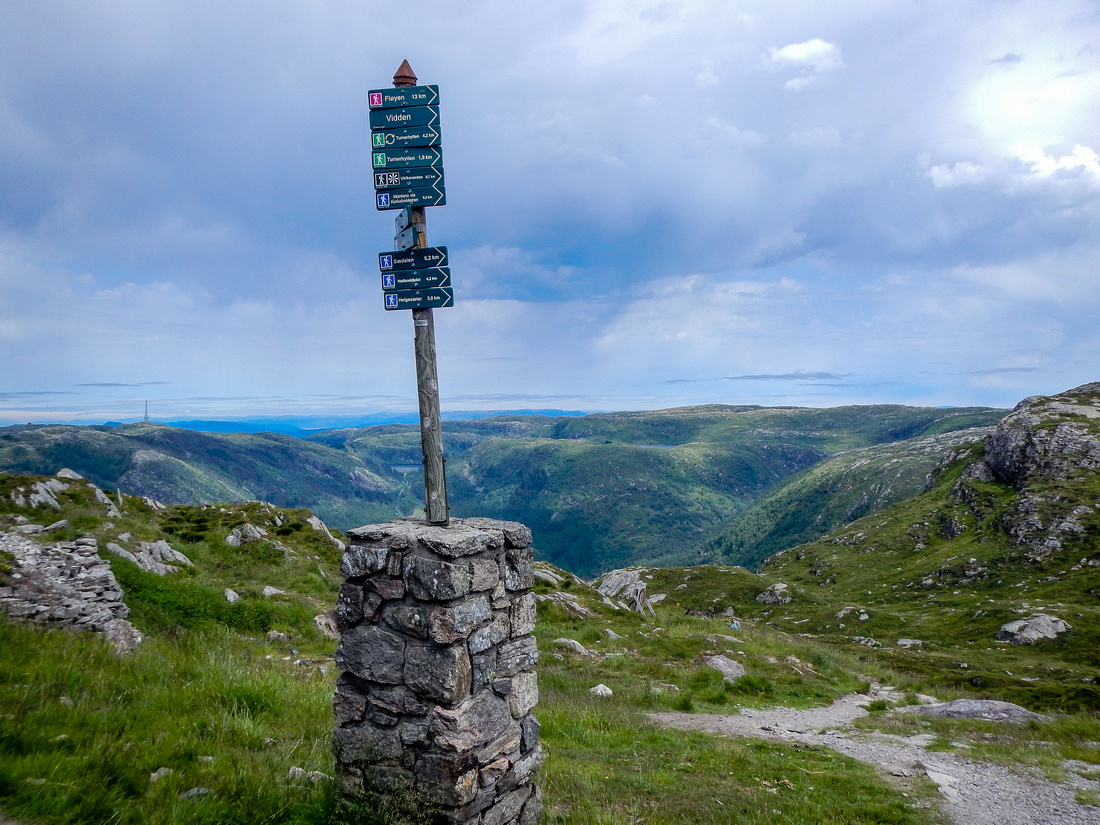 On top of Mt. Ulriken ready to start the hike 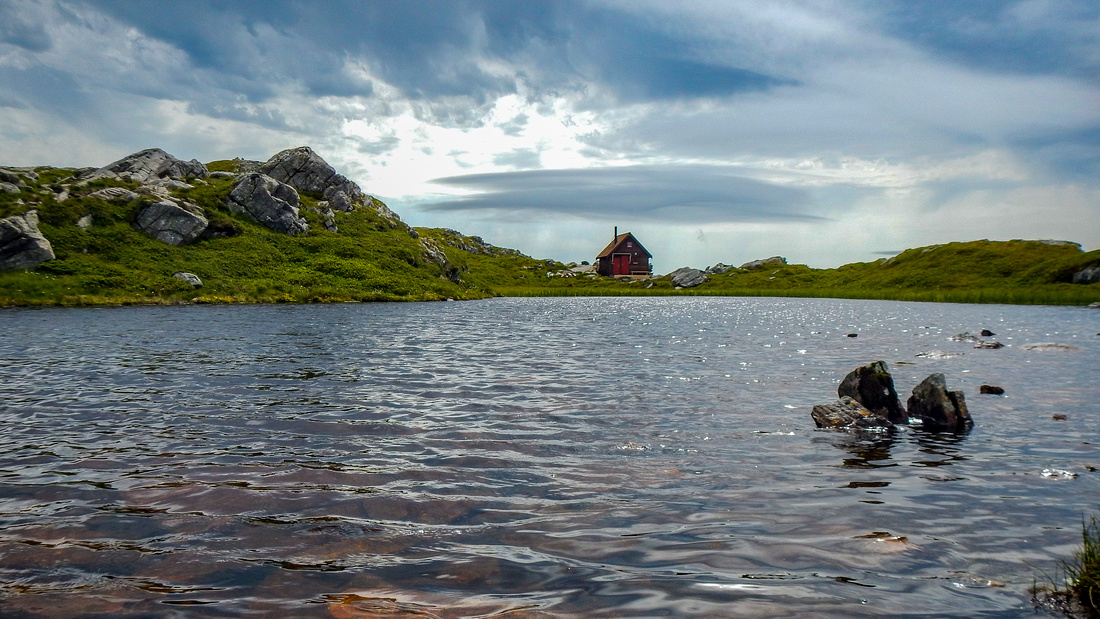 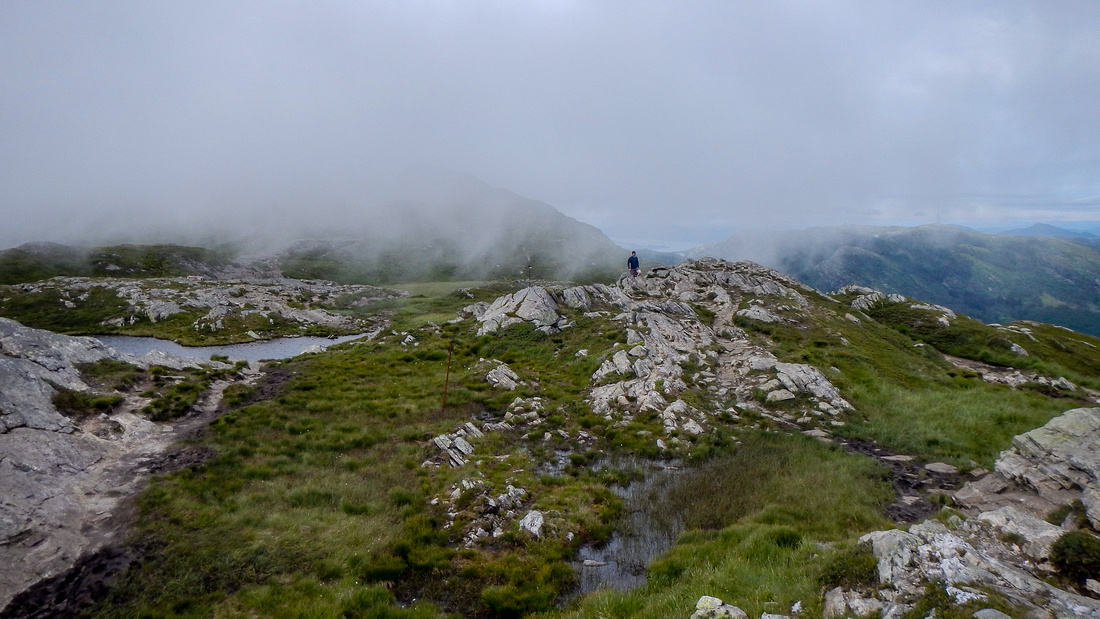 The hiking path to Mt. Fløyen 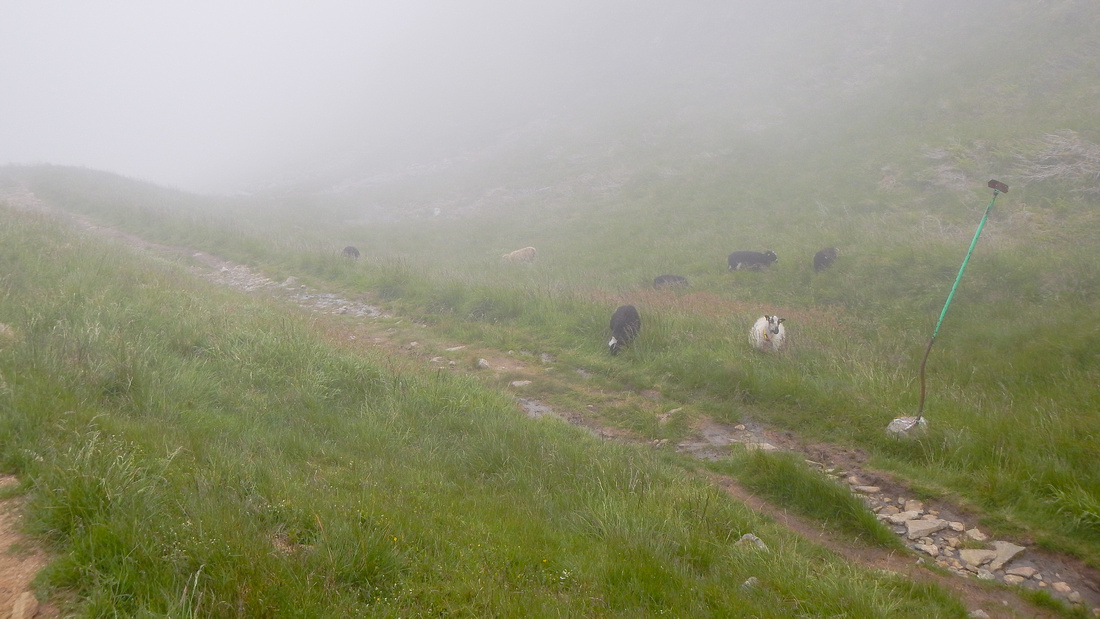 Most often we could only hear the sheep

They also did a guided tour of the Leprosy Museum where the Leprosy bacteria was first identified.  It is believed that due to Norway’s tradition of caring for their sick at home, the contagious disease got a stronger foothold in Norway and in the 18th century Europe, Norway had the highest rate of Leprosy. 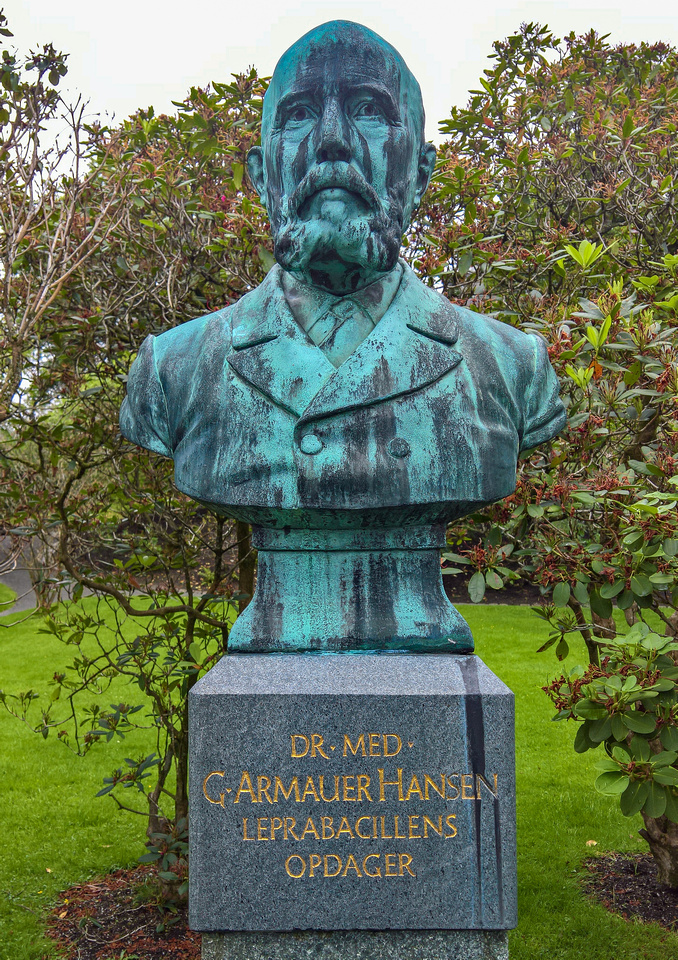 For 3 days, Maud and us got the 72 hours Bergen card and enjoyed free admission to museums and rides on the busses. 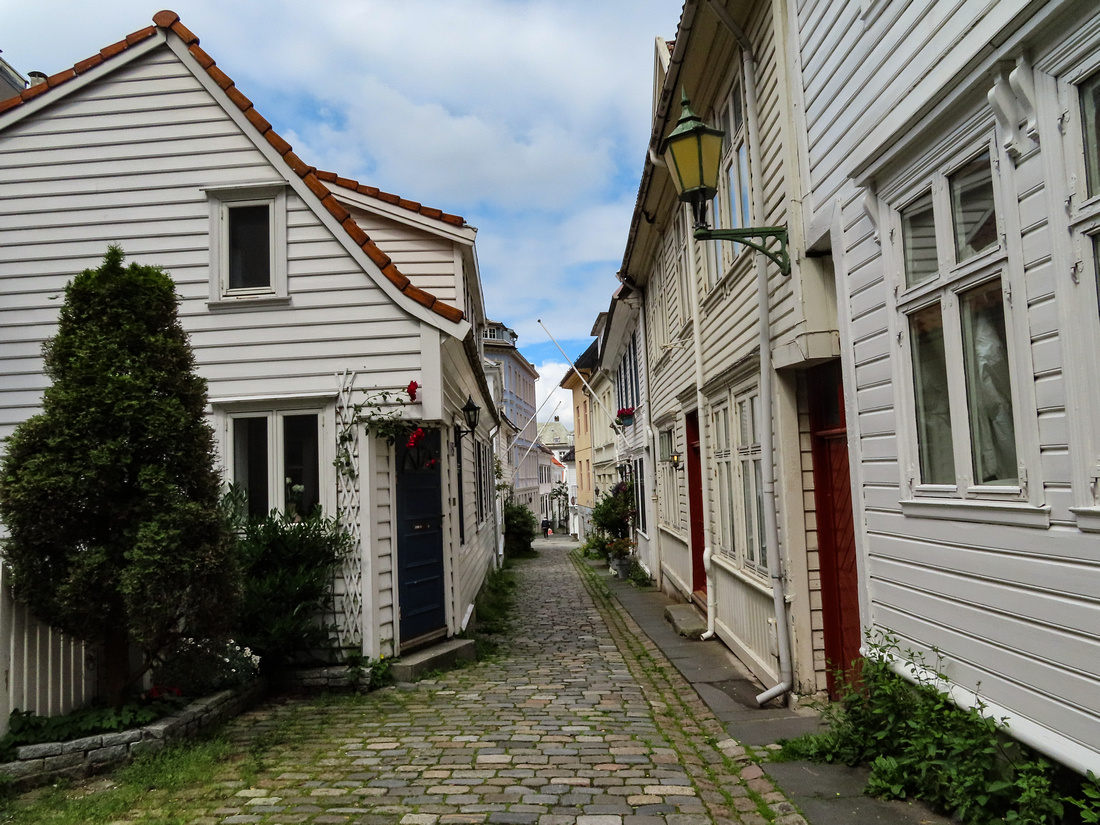 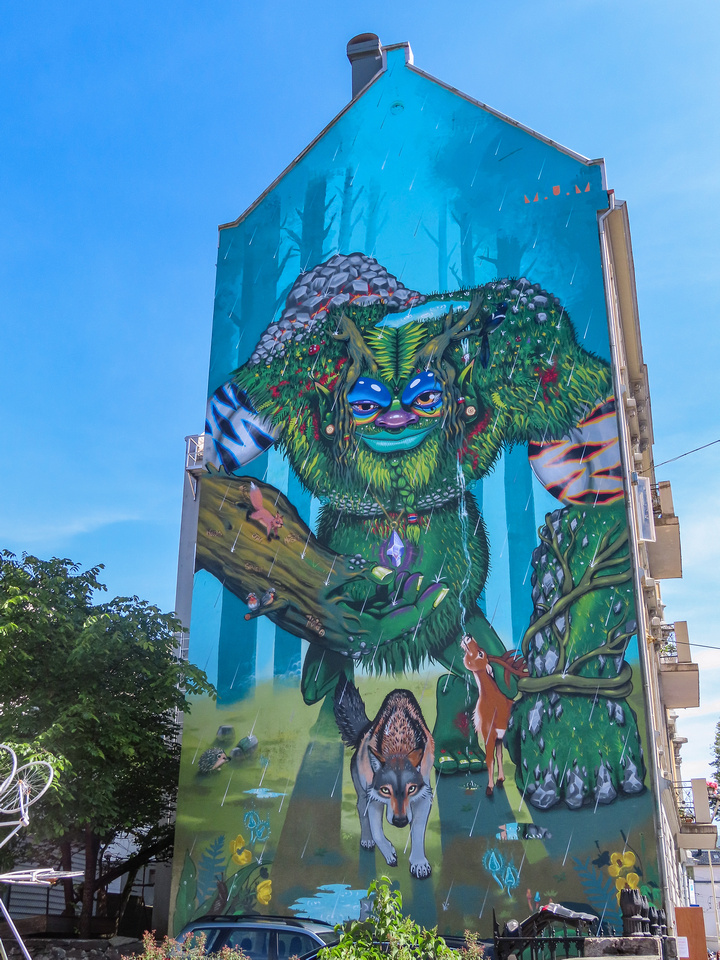 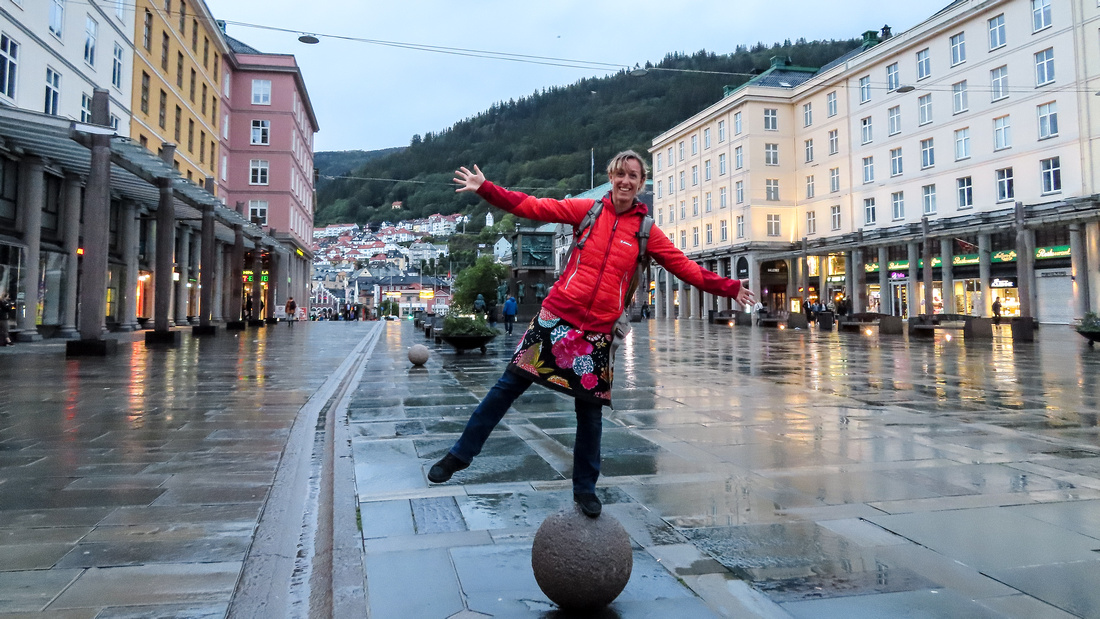 Ready for adventureMaud has good balance!

First stop: Guided tour of Troldhaugen, Norwegian composer, Edvard Grieg’s home. Lovely home but way too many people on the tour for the small rooms. The tour of his home was followed by a 30-minute piano recital in the concert hall with a beautiful view of the fjord and the cabin where he composed many of his music. 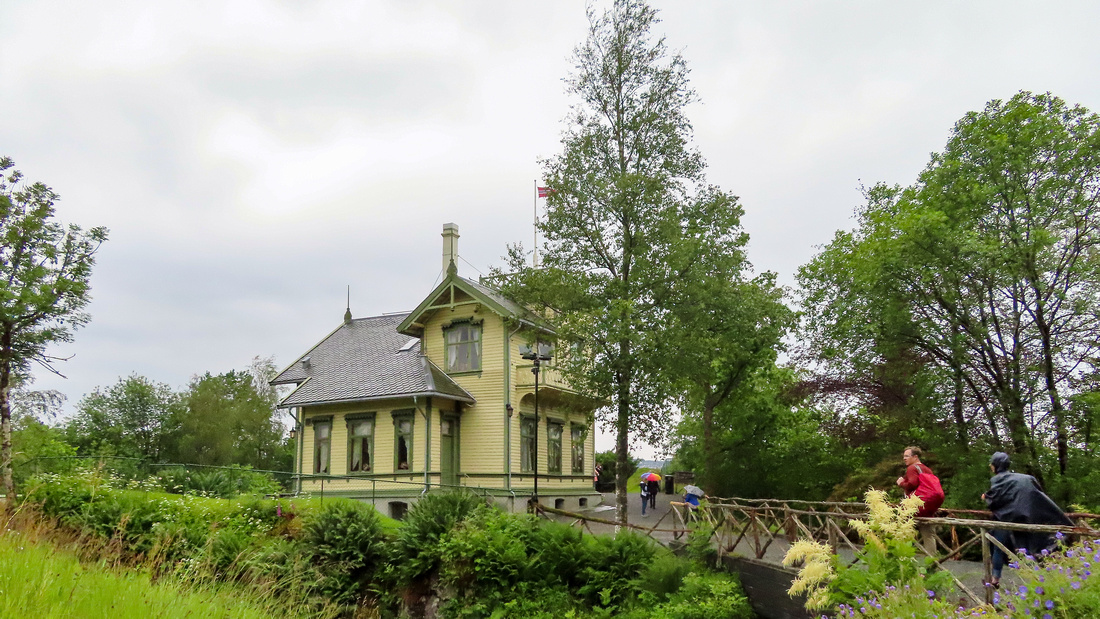 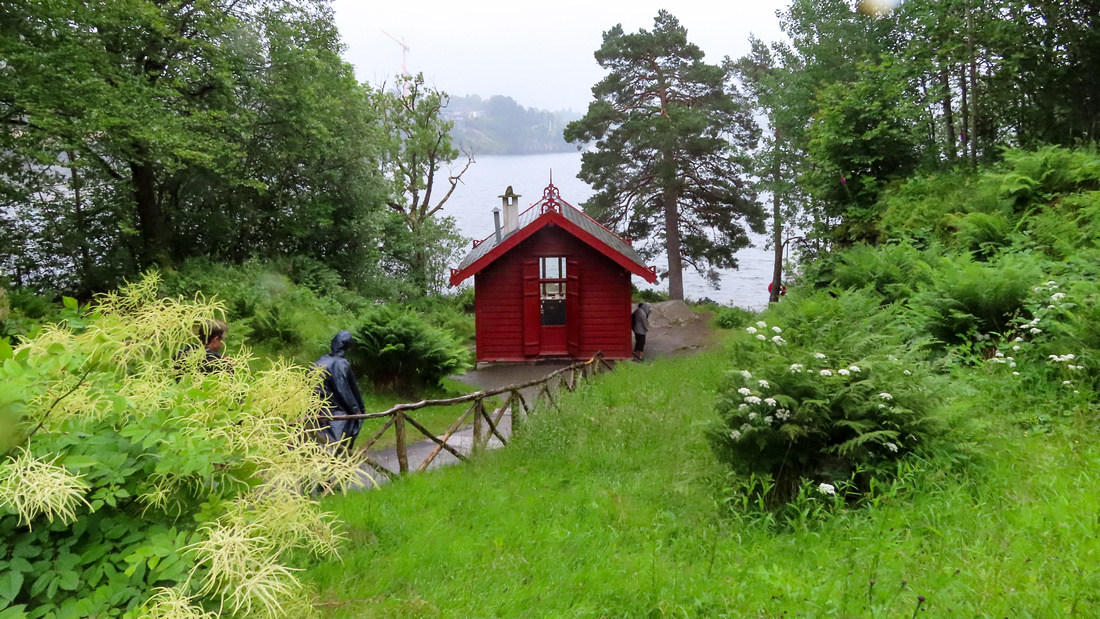 The composer hut in Troldhaugen 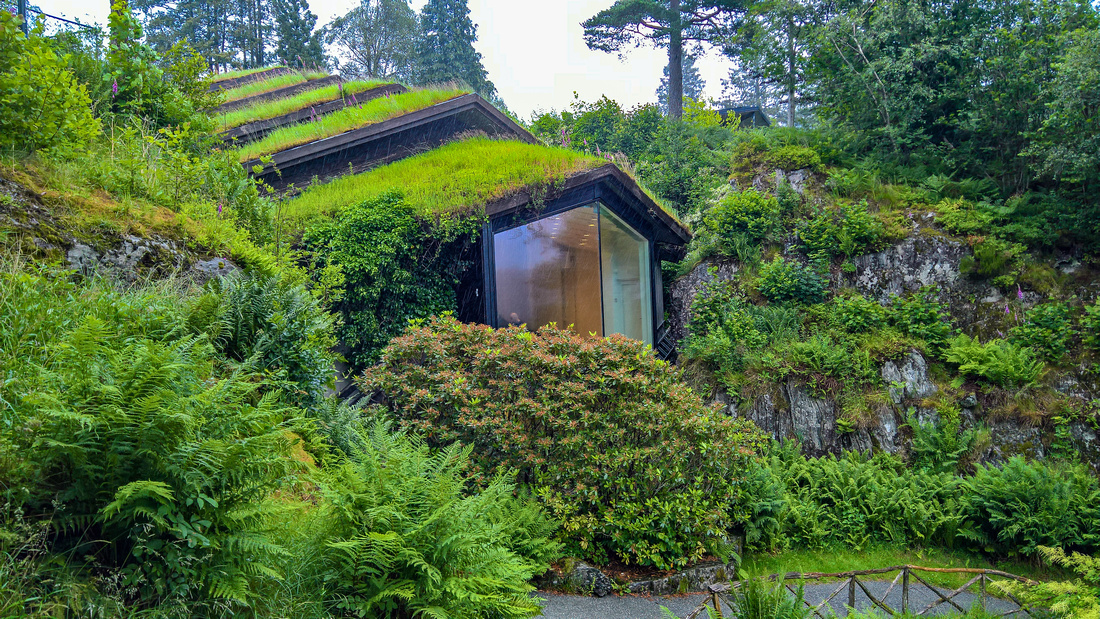 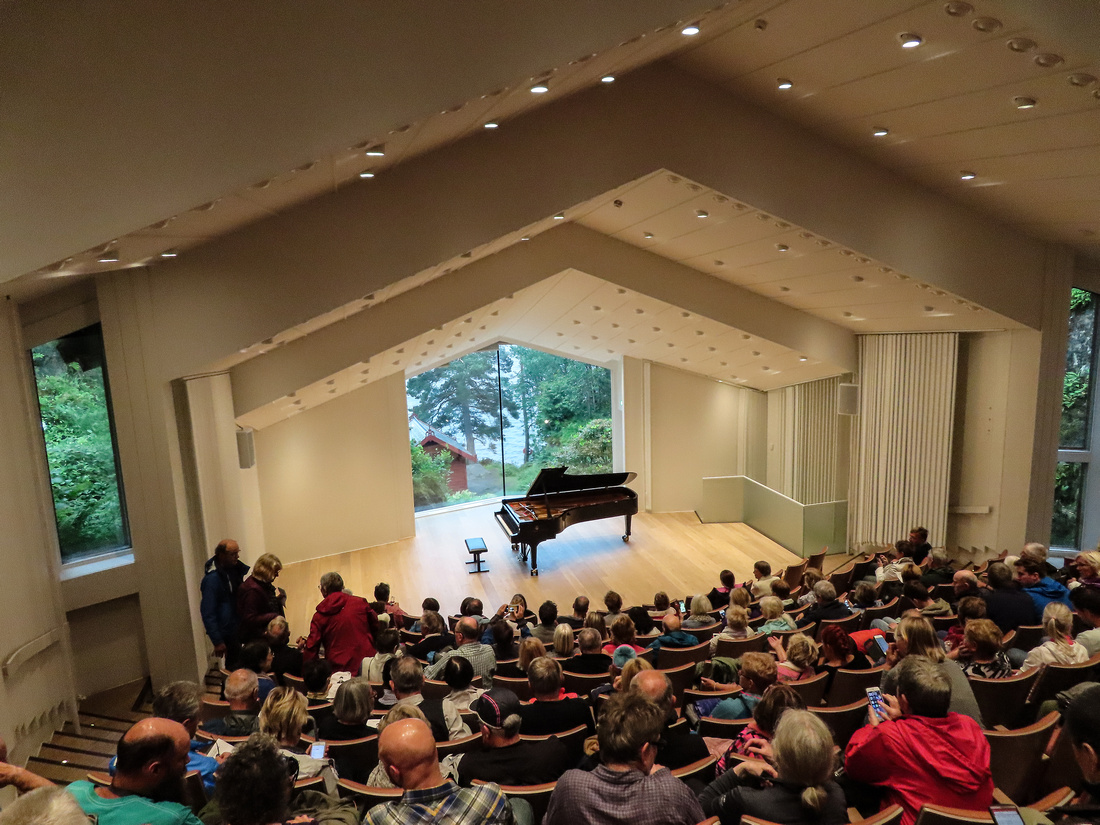 Horda Museum focused on the life of the people around Bergen in the last few centuries. Included a display of various boats that were used for cargo, fishing, transport and going to church. 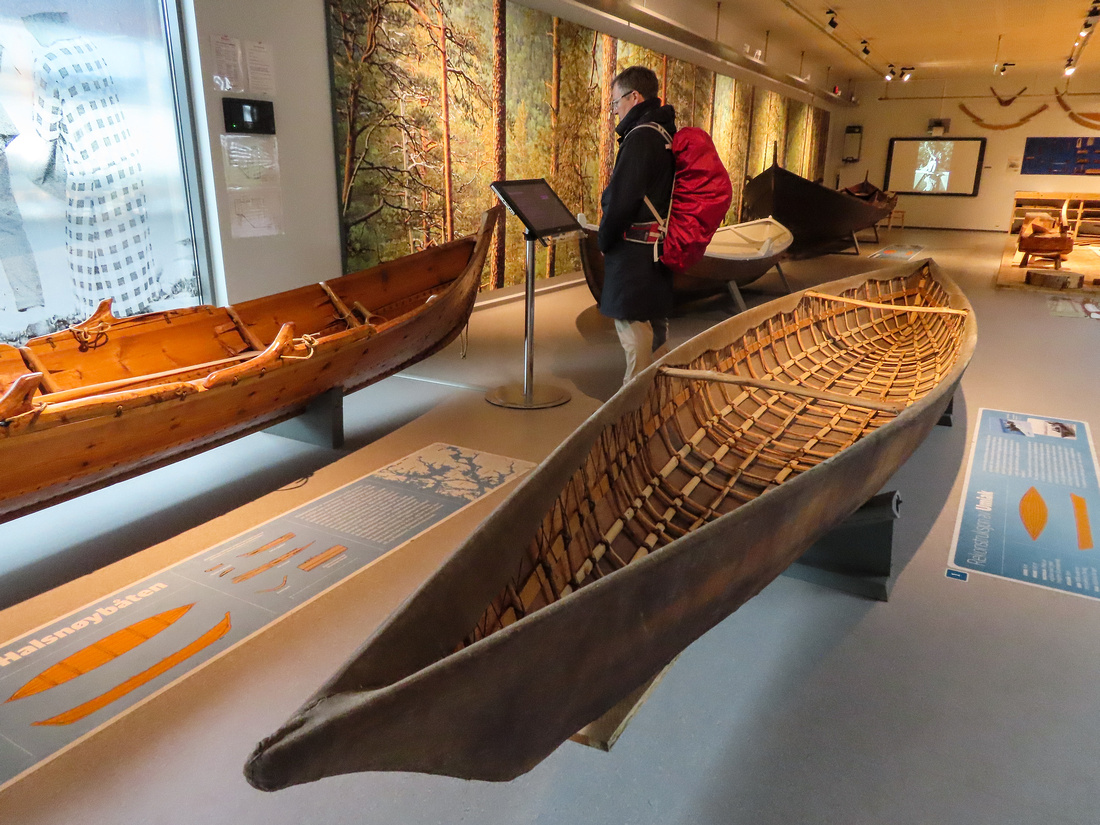 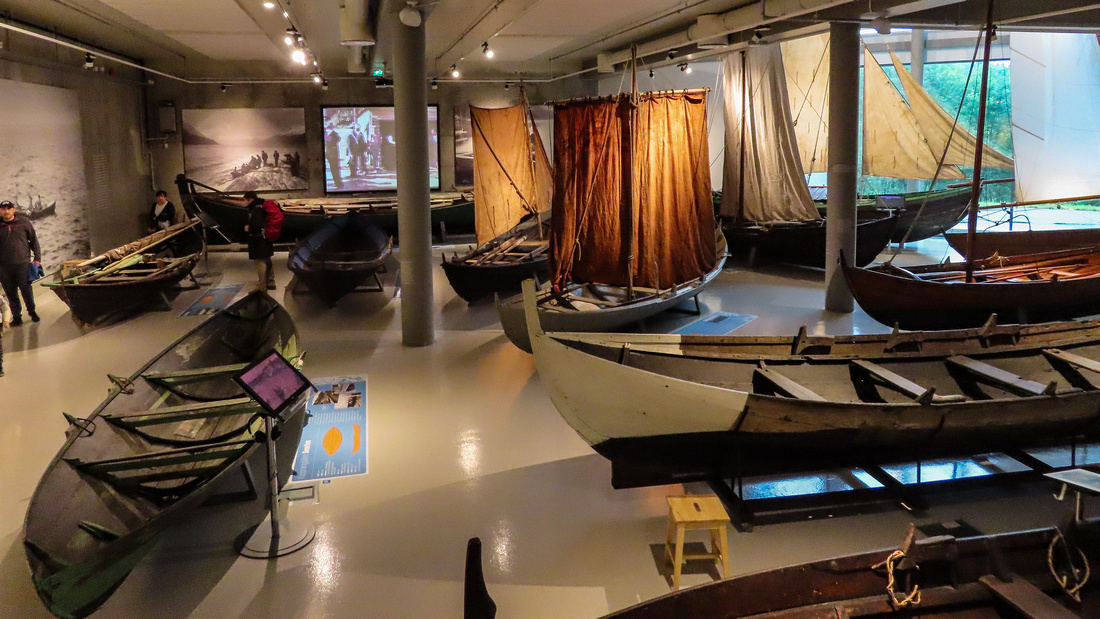 Boats were vital for the survival

Fanfoft Church was built in 1150 in Fortun in Sogn. It was moved to Bergen in 1883. It burned down by arson in 1992. The owner received no help from the state and single handedly financed it and had it rebuilt. It’s a near perfect replica we were told and reopened in 1997. The woodwork and the carving are beautifully made. 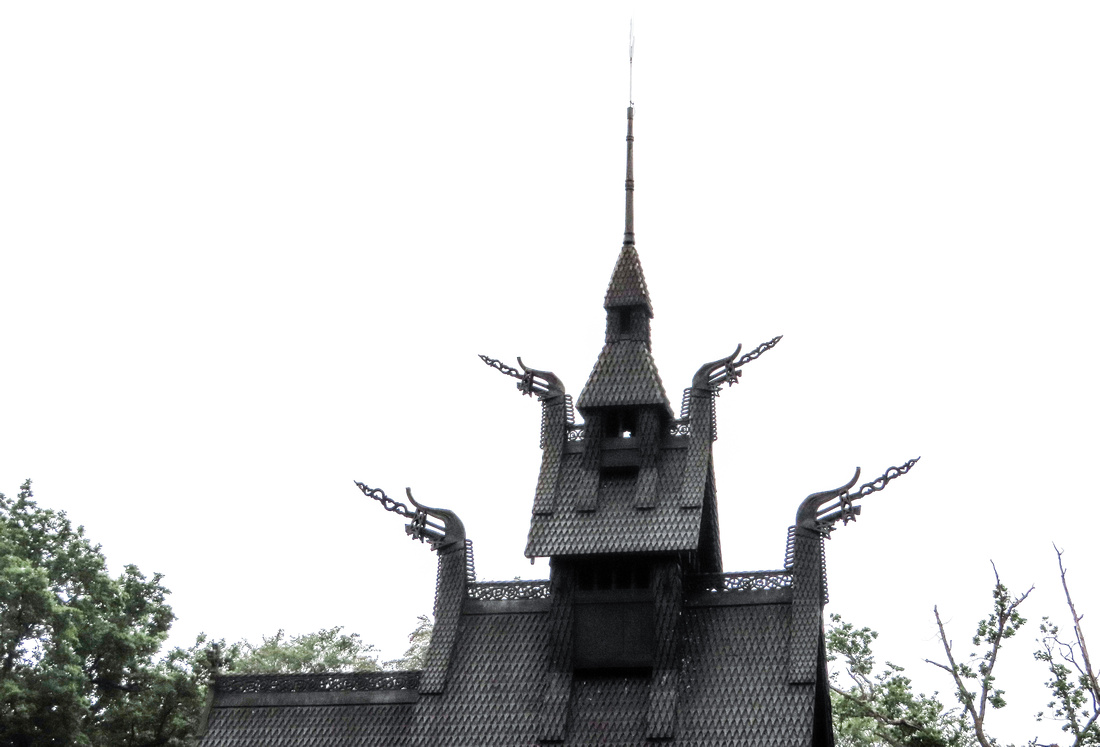 Old Bergen Museum is an open-air museum with 55 wooden homes that were relocated to one location from various parts of the city. Most of the homes were constructed in the 17th, 18th, and 19th century. Many of the houses we could go inside, and it still had the furniture from that time period. Some of the houses had actors that did some reenactment. 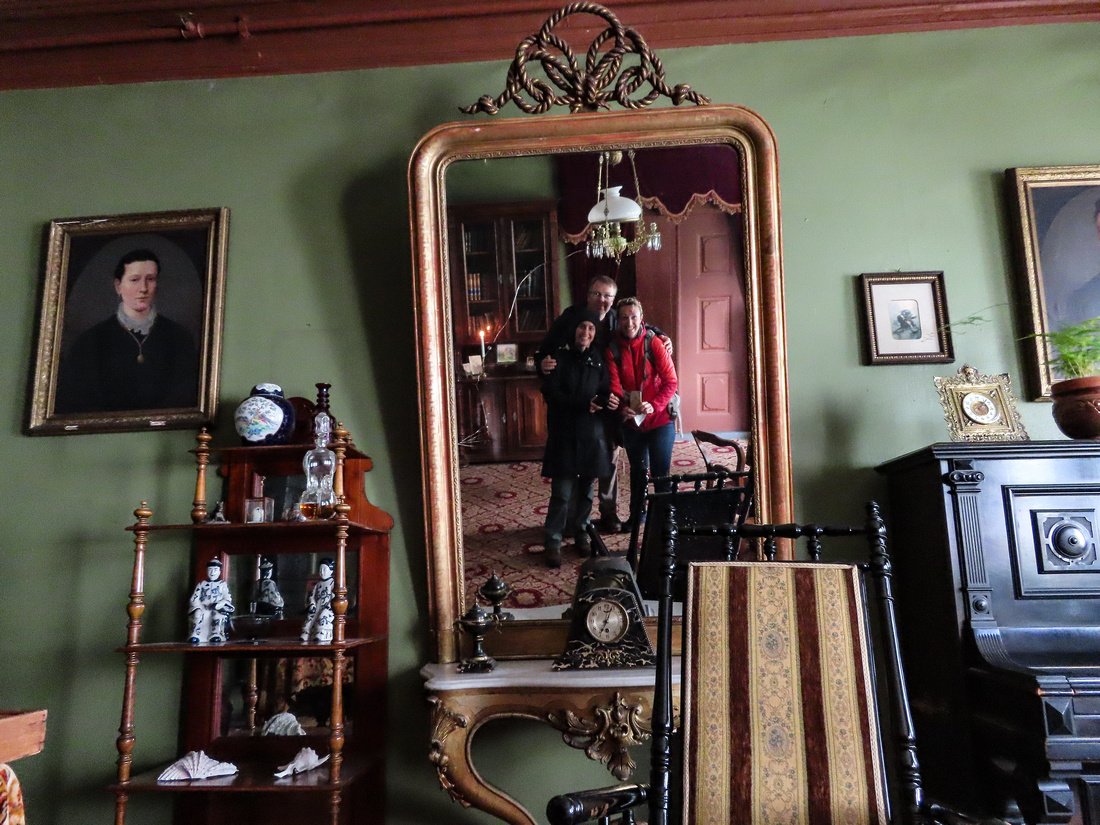 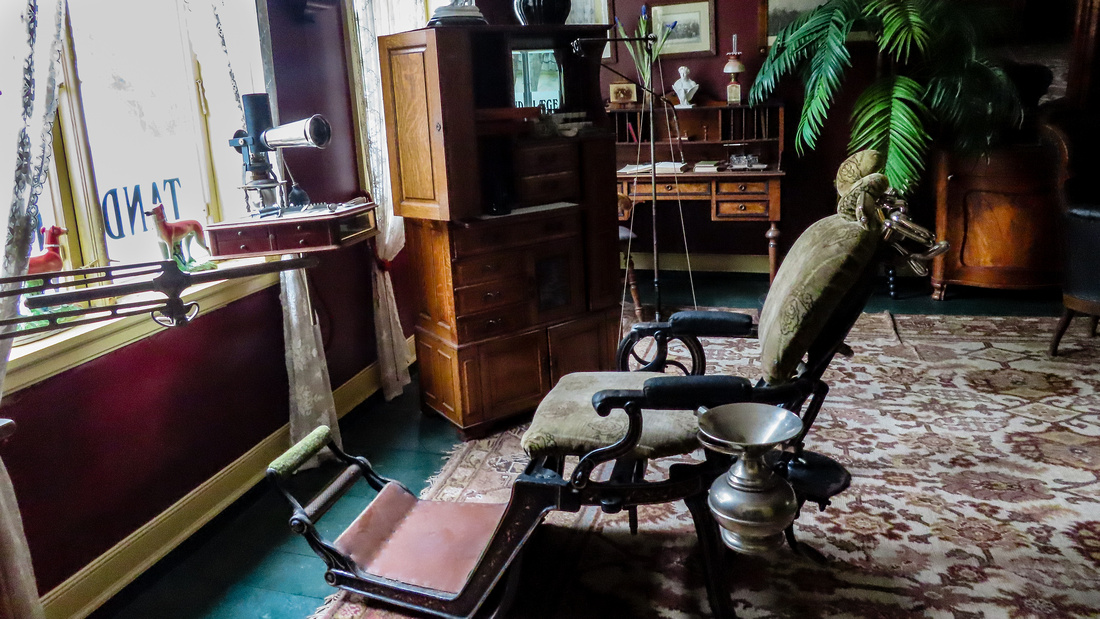 Old Bergen museumJust one of the many reason to praise modern times! The dentist's clinic!

The Norwegian Fisheries Museum was very interesting and focused on the fish industry, the overfishing that’s happening and the detailed information on various fish from the area. 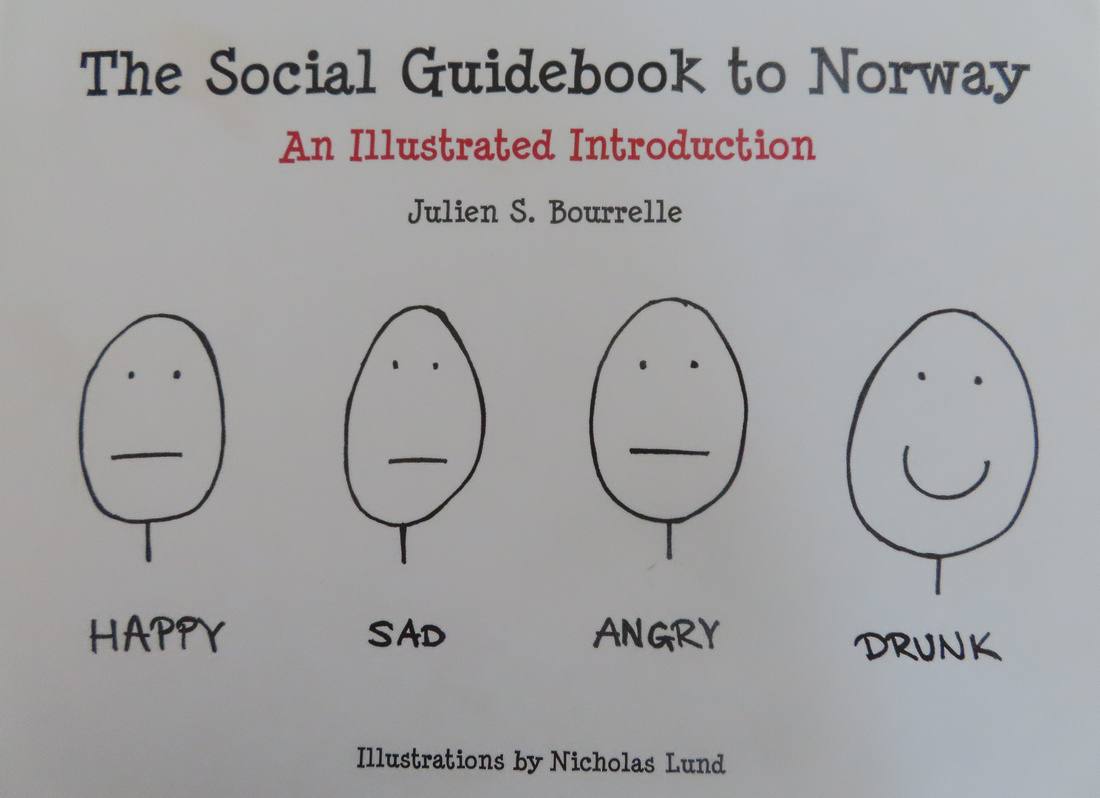 How to interpret Norwegian facial expressionDo keep in mind that a small beer is about $12 in Norway. 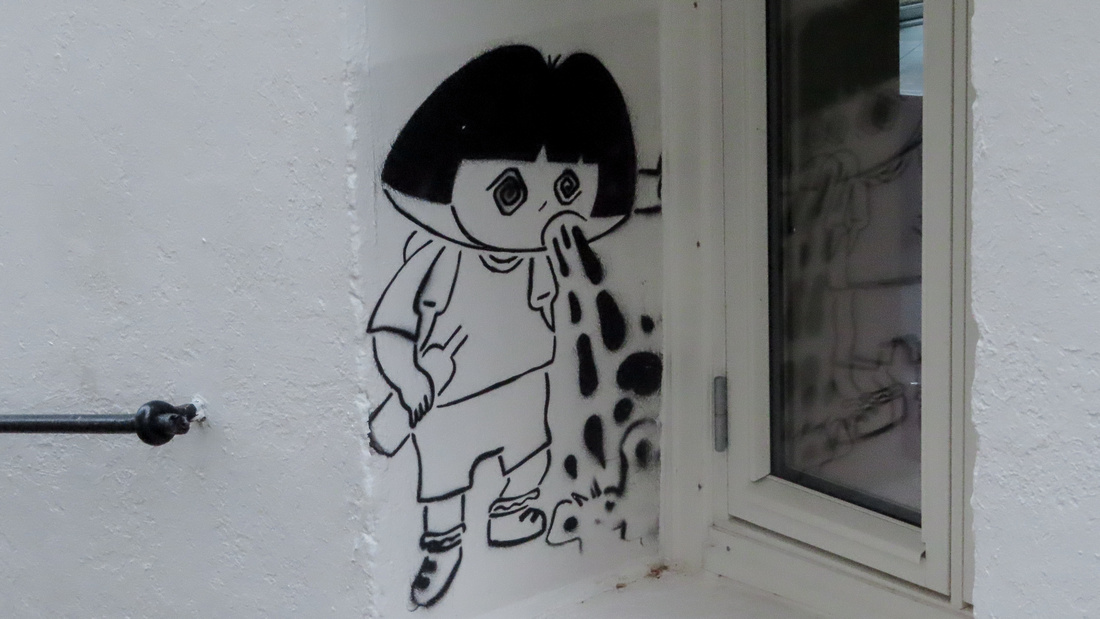 Not in the "The Social Guidebook to Norway"Perhaps, it is Norwegian for too much fun?

While we were in Bergen, on June 30, we celebrated 1 year of having left Portland and started our journey on the road. It’s been a good year. We have seen a lot, met many new friends, reconnected with old friends and also learned a bit about ourselves. We hope to continue exploring for another 3- 6 months but we shall see what the budget dictates.

The tango event was fantastic! Well organized, wonderful dancers, great DJs and caring hosts. What more could one ask for? At the start of the event, Vanessa knew only 3 people: Boris, Dag and Roberto (whom she also met in Buenos Aires). By the end of the event, she did not have enough fingers to count all the great tangueros and tangueras she met. 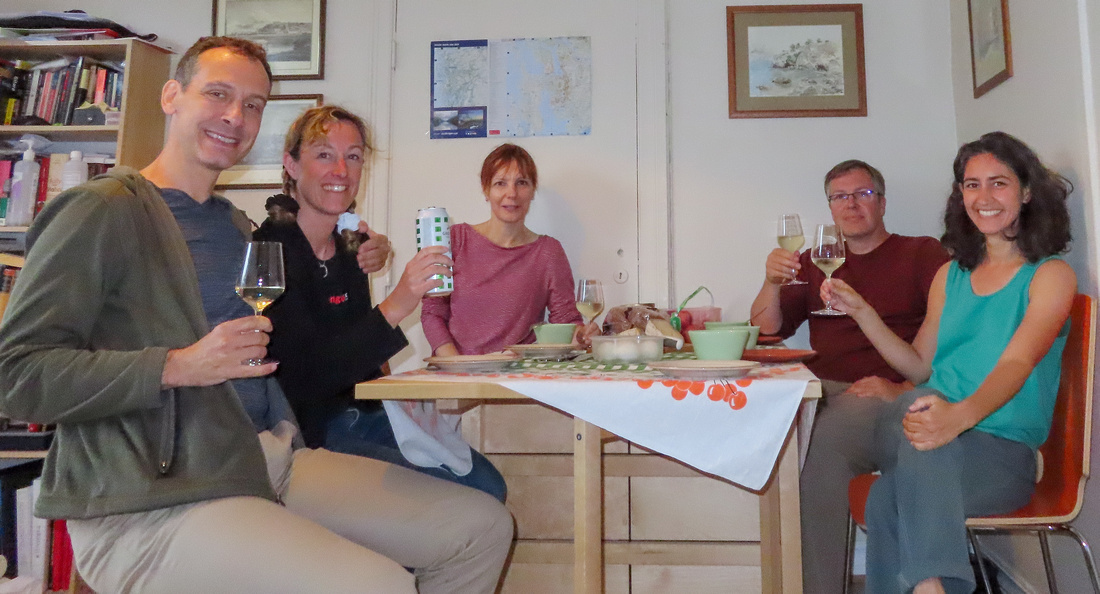 Now, we are back in Sweden, enjoying more family time.

*mouse over image to see captions

Megan Yvonne(non-registered)
I'm really enjoying the beautiful photos and descriptions! Can't wait for Asia.
Roger Tavarez(non-registered)
Fantastic
9er(non-registered)
That is the coolest concert hall I've ever seen. Was that a rhododendron in front of the picture window? Magnificent!
Gloria Lee(non-registered)
Lovely post. I hope to get to Norway and all Scandinavian countries. Thank you for a bit of history and awesome photos of your journeys.
Kristin(non-registered)
We really appreciate your stories and gorgeous photographs - sharing with us!! Wonderful that you're going with the flow and having your great times in the face of the Bureaucracy! Yeehaw!!!!!!
No comments posted.
Loading...
Recent Posts
Sun sets on our travels! Sayonara Japan Along the Seto Inland Sea, Japan Osaka, Japan A week in Taiwan Vietnam - Hanoi & Tam Coc Thailand, the land of smiles Midsummer in Sweden Buenos Bergen, Norway Baustelle & Stau - Road Trip to Germany
Keywords
Argentina Sweden Osaka Buenos Aires Chile Asuka Danjiri Fushimi-Inari Kendo Kofun
Archive
January February March April May June July August September October November December
© Terralinda
Powered by ZENFOLIO User Agreement
Cancel
Continue