Once you are in the south of Denmark, getting to Germany is just a few hours away or so we thought. The map estimated an eight-hour drive to our destination to Lahn-Dill-Kreis district in the state of Hessen. The minutes become hours as we reached another Baustelle = road construction followed by Stau= traffic jam. As soon as we were through one, getting comfortable cruising, there came another sign Baustelle in 2 km! 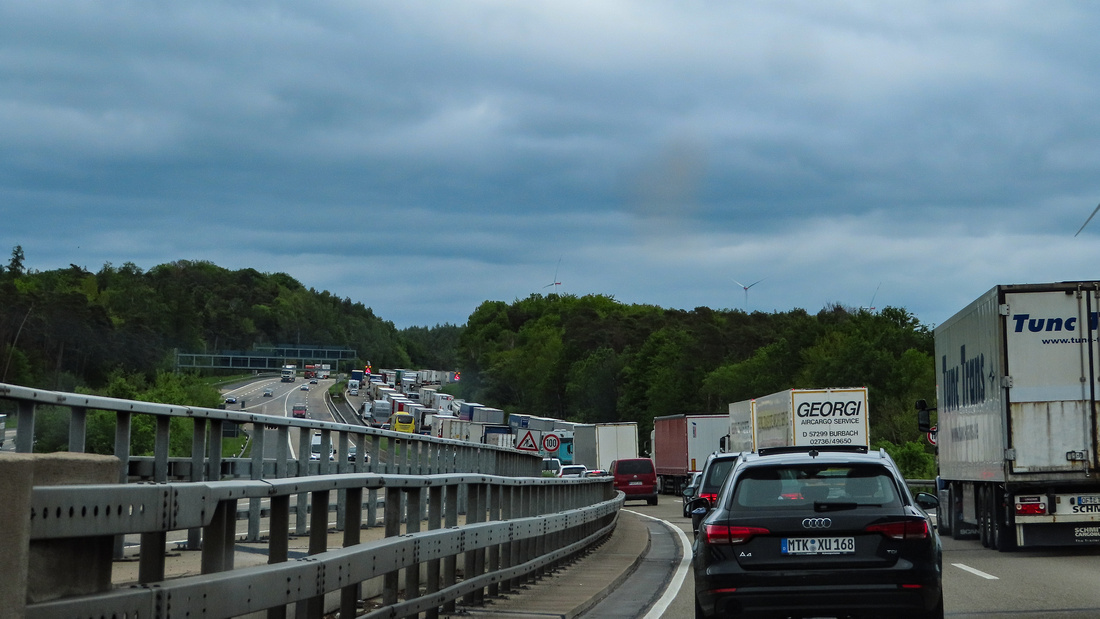 Baustelle & StauThere might be a free speed limit on the Autobahn but ...

If you have never driven in Germany and you like speeding, then this is your place. Most German freeways recommend a speed limit of 130 km (80 miles) per hour. However, as our German friends explained to us, when you see the end of speed‑limit sign you can go as fast you want. 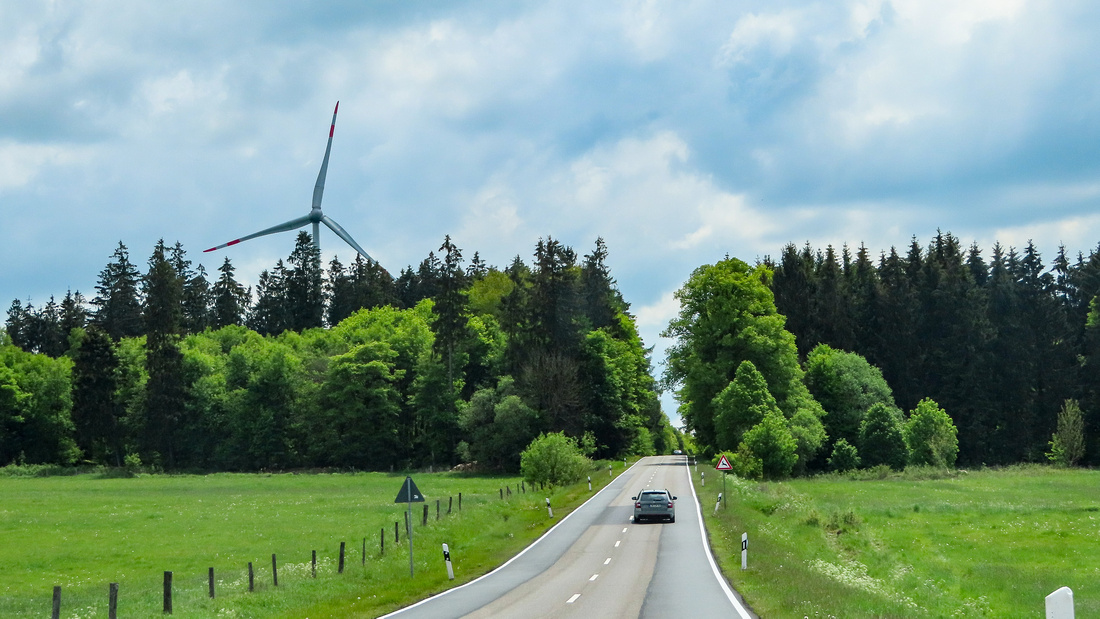 When Vanessa moved to the US, 27 years ago, she stayed in touch with a couple of friends. You know that concept of “Pen Pal” when they actually handwrote letters. Well, they did, and they are still in touch! We stayed with Julia’s parents in their beautiful house that her dad had designed and constructed. We enjoyed five fantastic days and got pampered by their warm welcome and hospitality. 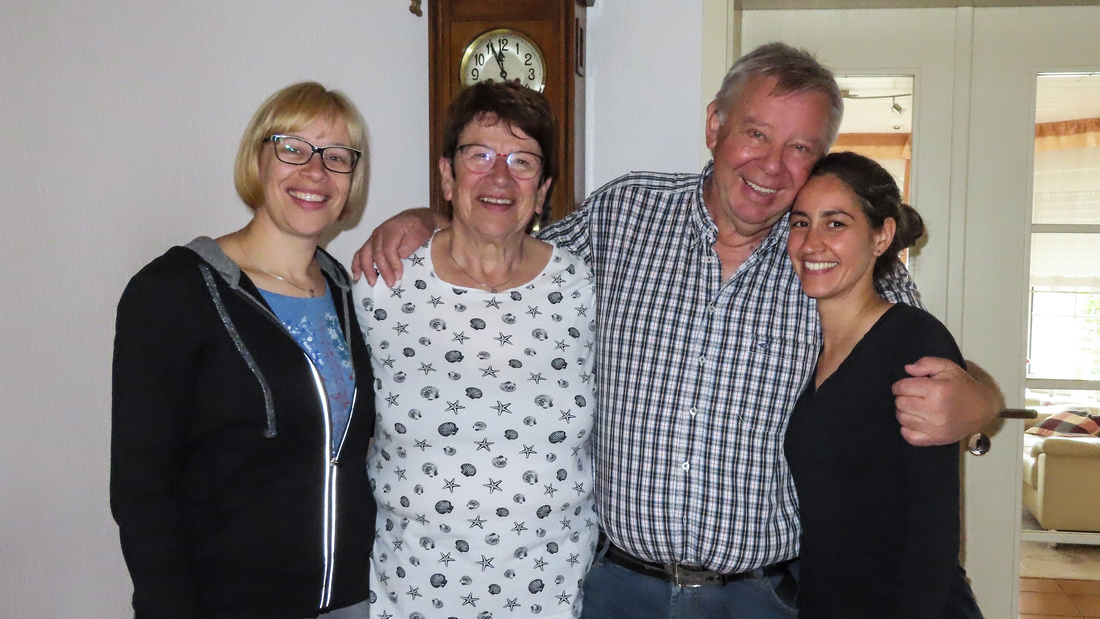 Julia and her parents. Lovely people!

Somehow, we managed to time it perfectly and be there to celebrate Marko’s birthday. Marko is Julia’s husband. Soren got to meet the cousins and parents and Vanessa enjoyed seeing everyone again after 13 years, since Julia and Marko’s wedding. 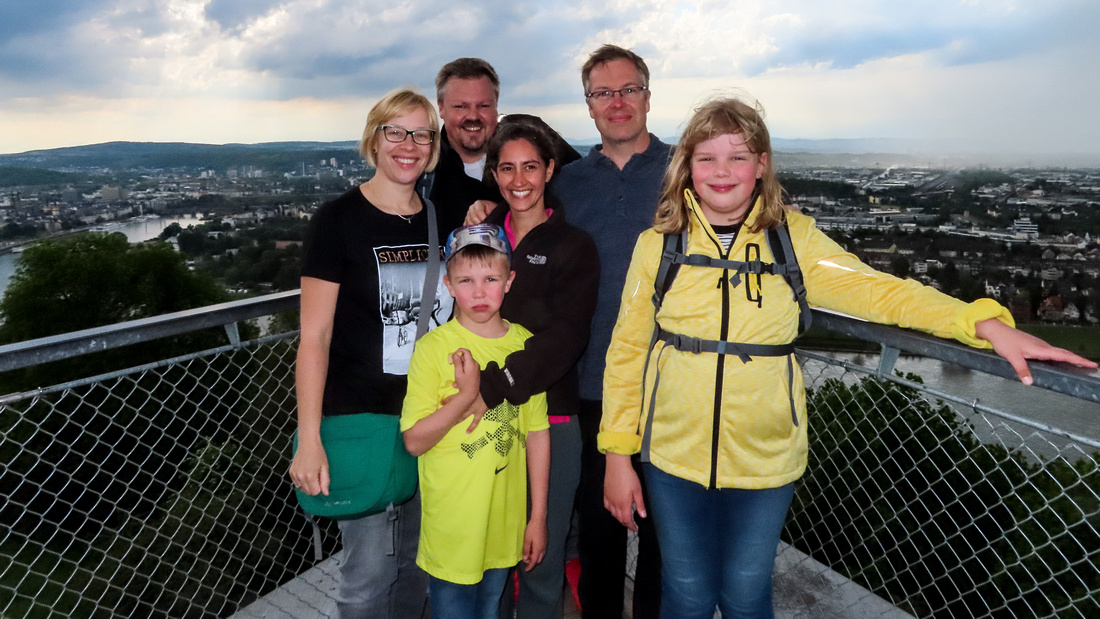 Julia, Marko, Emila and Henri & us in Koblenz with a view of the Rhine River

From Edingen, our base, we went on a few day trips.

Herborn, a historic town of about 21,000 people. This is where Vanessa used to live. We had fun walking through the main street, the marketplace, up the stairs to the Kirchberg and all the way up the hill where the family apartment was. It was fun to see what has changed and what remained exactly the same. The little bookstore/library was still there and so were the schools. There were many half-timbered houses. The oldest was built in 1445, imagine 47 years before Columbus discovered the Americas. 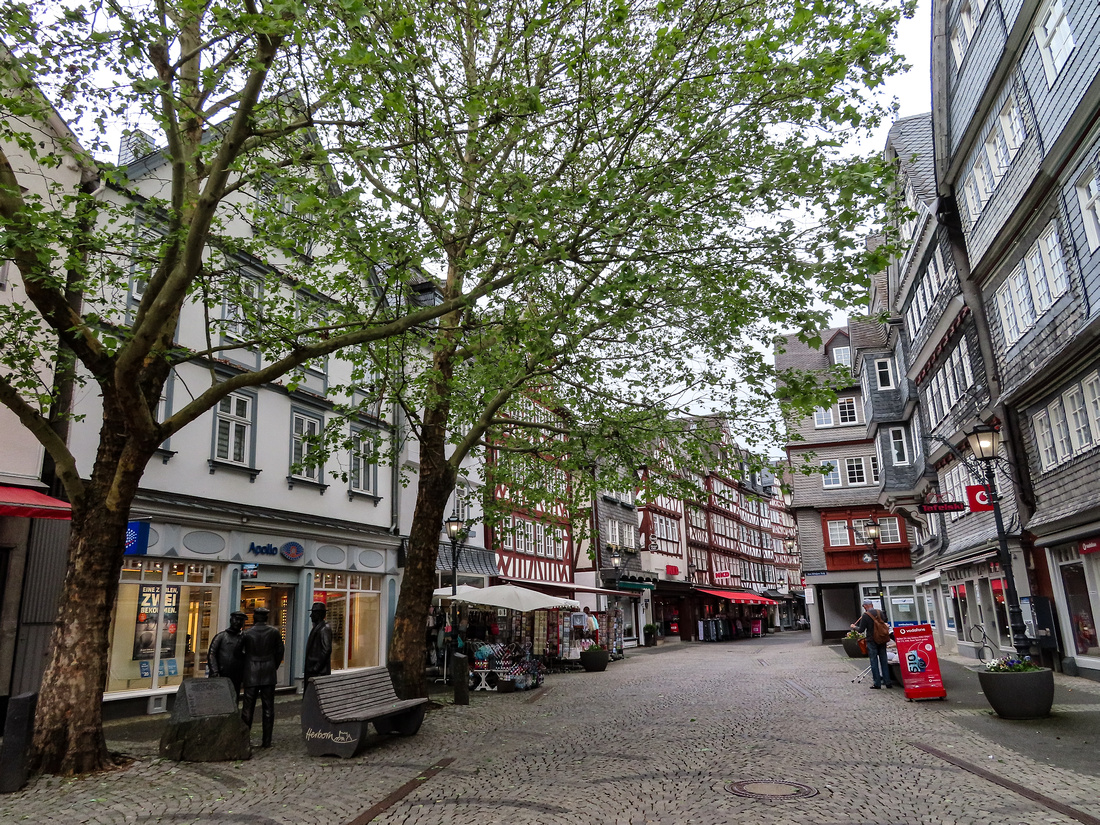 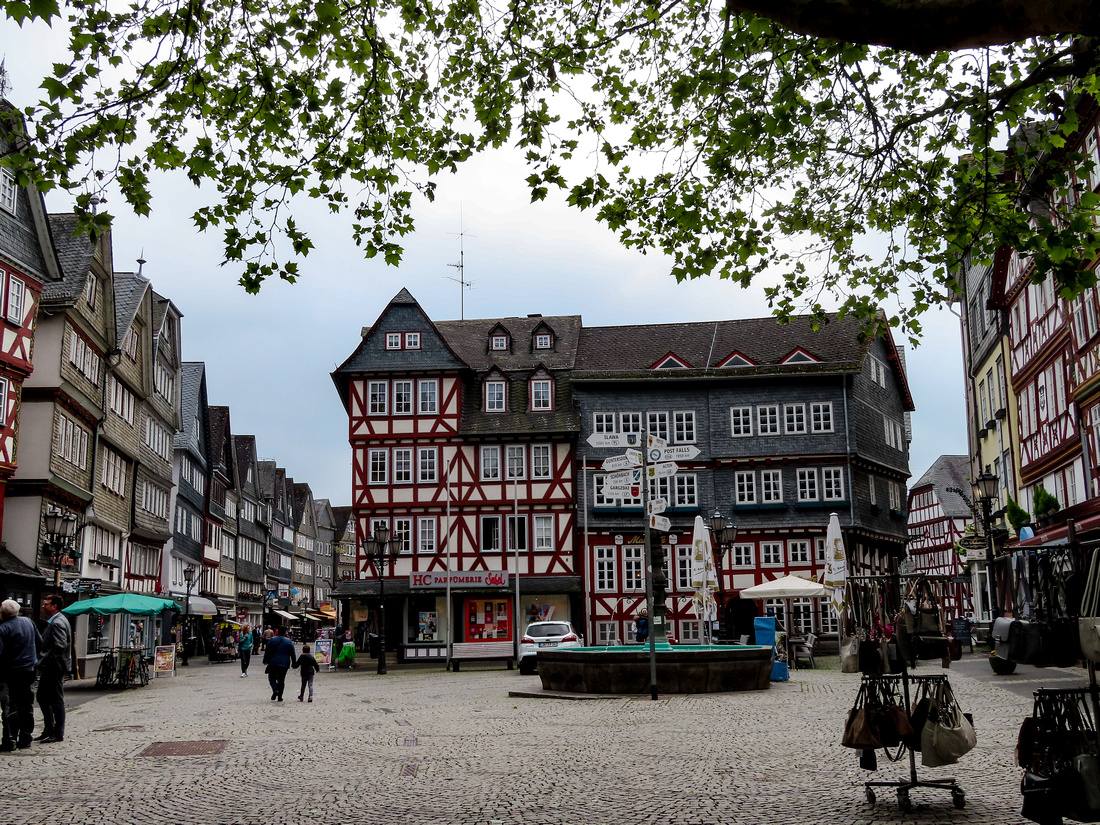 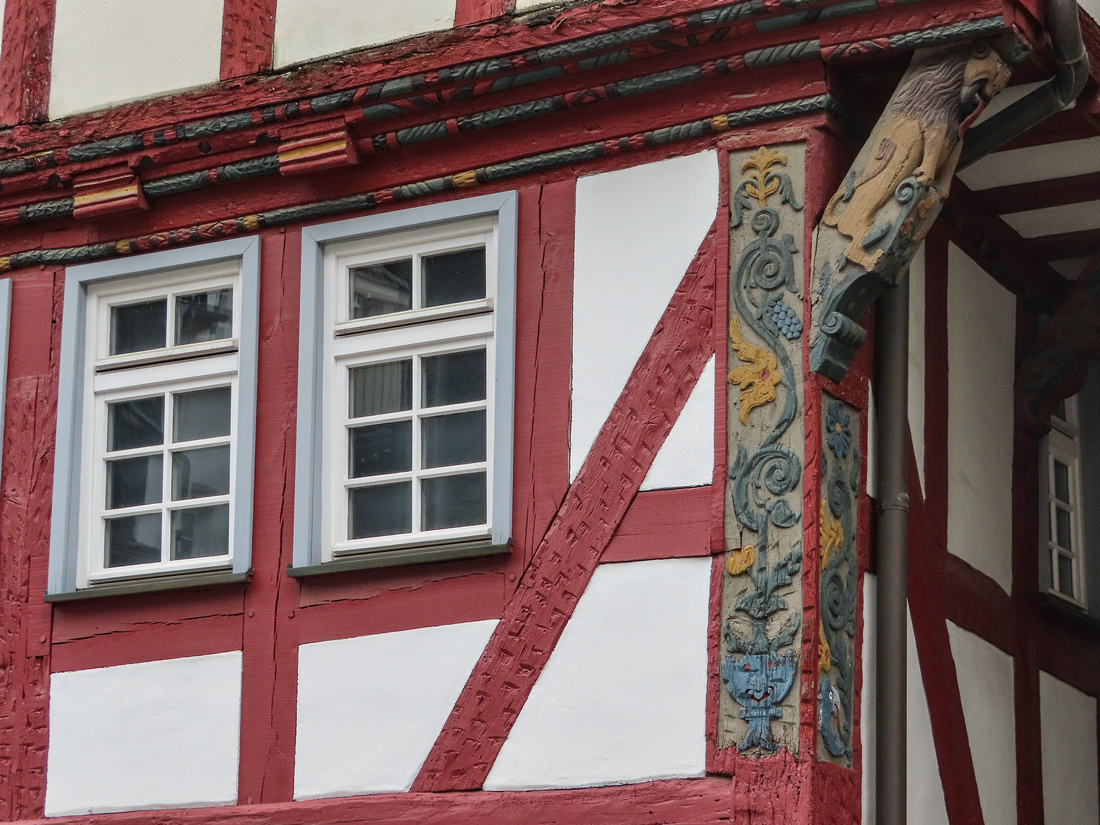 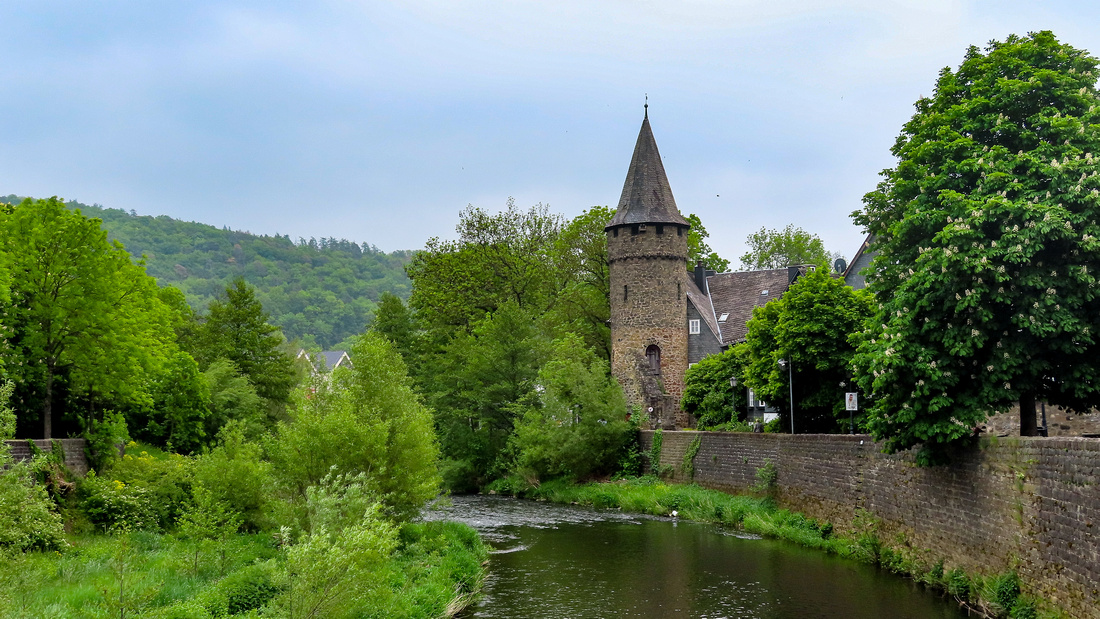 Wetzlar, an ancient town known for its medieval church, the Dom serves both the Catholics and Protestants. One of the most important enterprise is Leica Microsystems. Leica cameras are known for their high quality and the 35 mm photography was invented in Wetzlar. 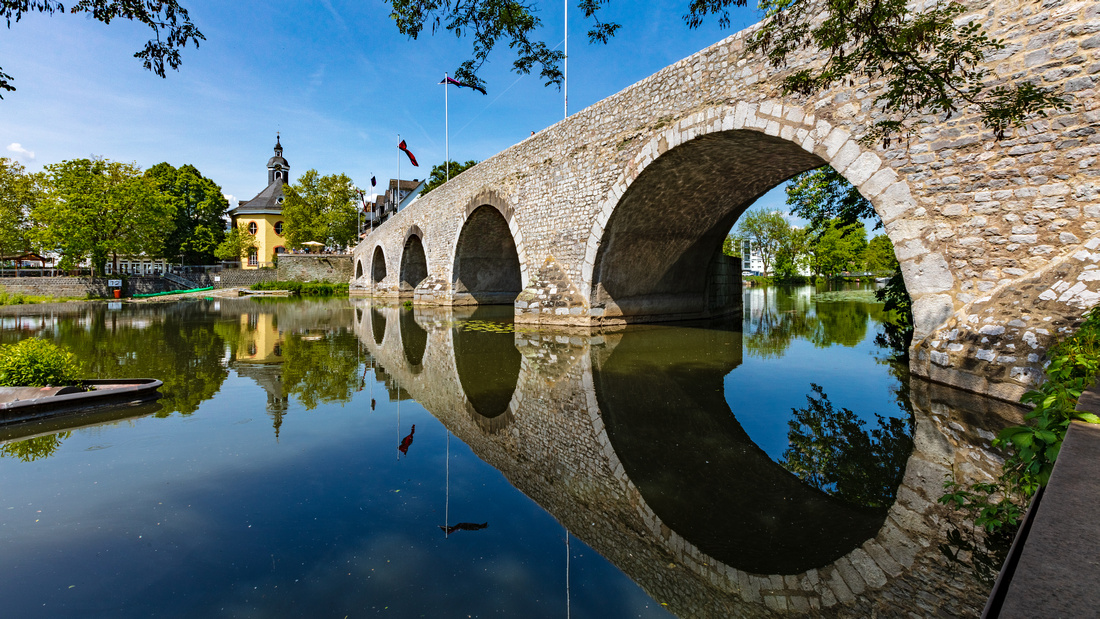 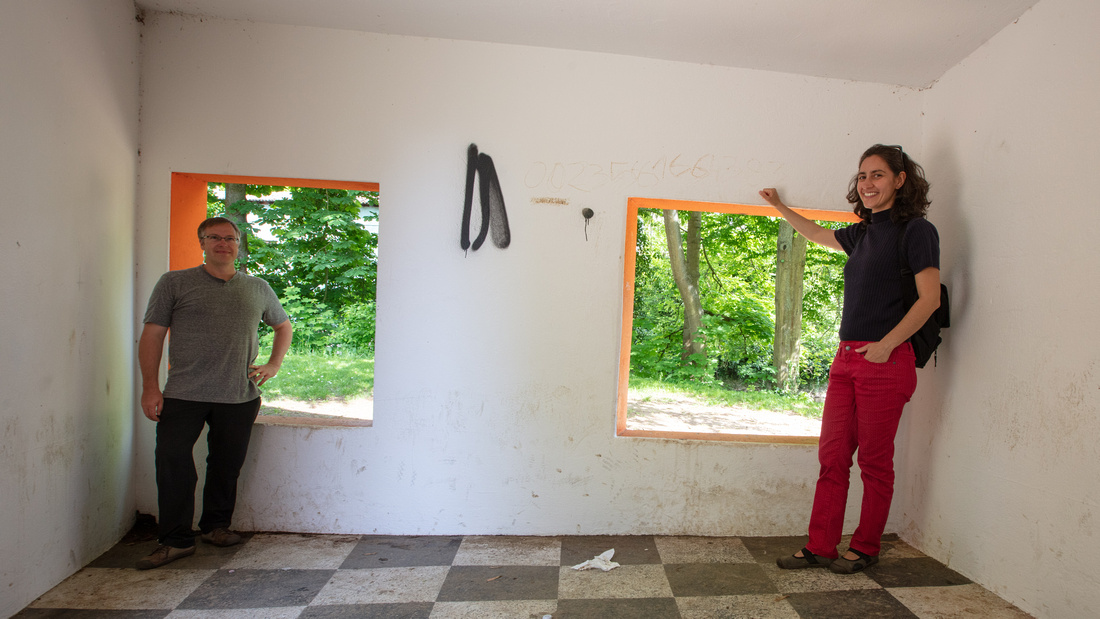 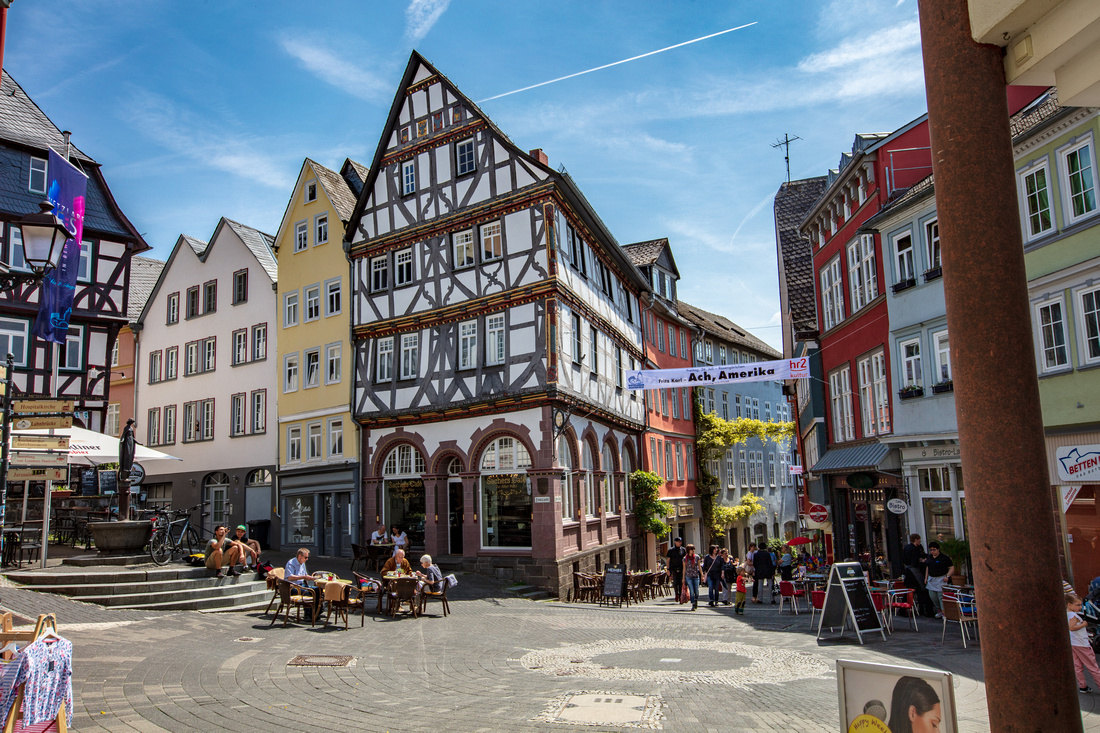 Wetzlar"... a little ill built town" according to Goethe who stayed in Wetzlar, fell in love and fled 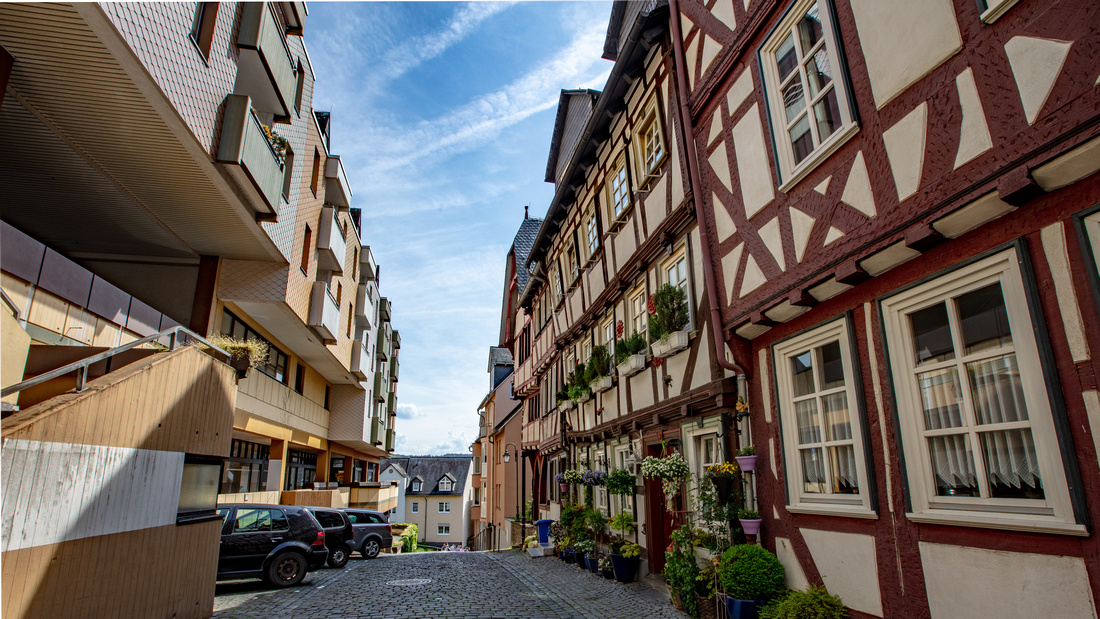 One side of the street survived the warWetzlar 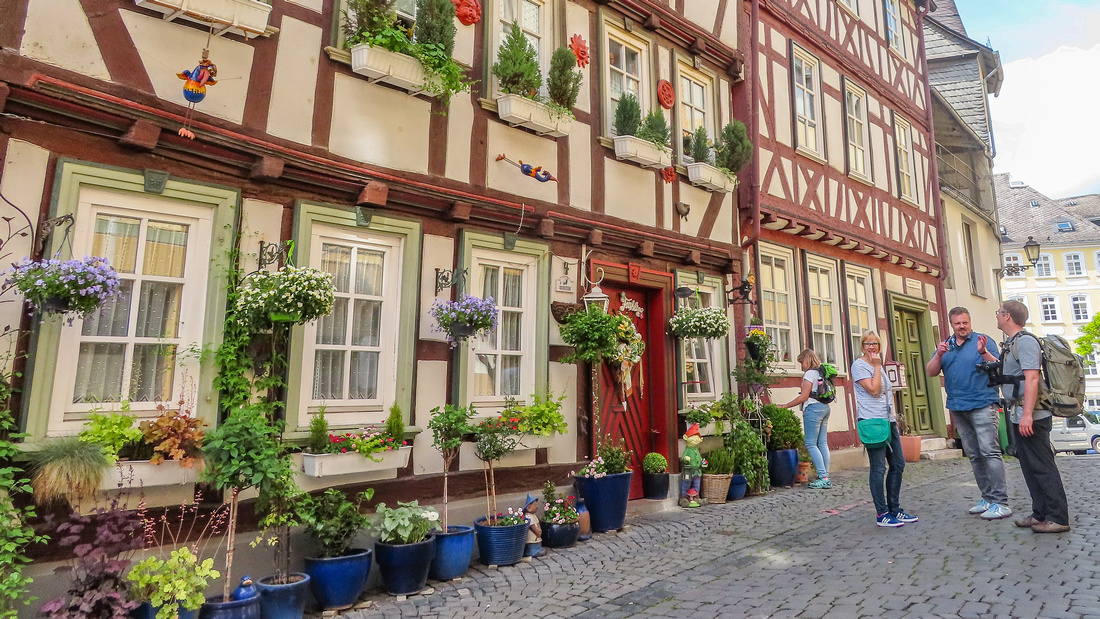 Koblenz, originated from Latin meaning the “confluence of the two rivers”. Today, the confluence is referred to as “Deutsches Eck " (the German Corner") where the Mosel River and the Rhine River meet. At the corner there is a monumental statue of Wilhelm I (full name: Wilhelm Friedrich Ludwig von Hohenzollern), the first German Emperor who unified Germany. Up on the hill is the strategically built Ehrenbreitstein Fortress which provides a fantastic view of Koblenz and Deutsches Eck. 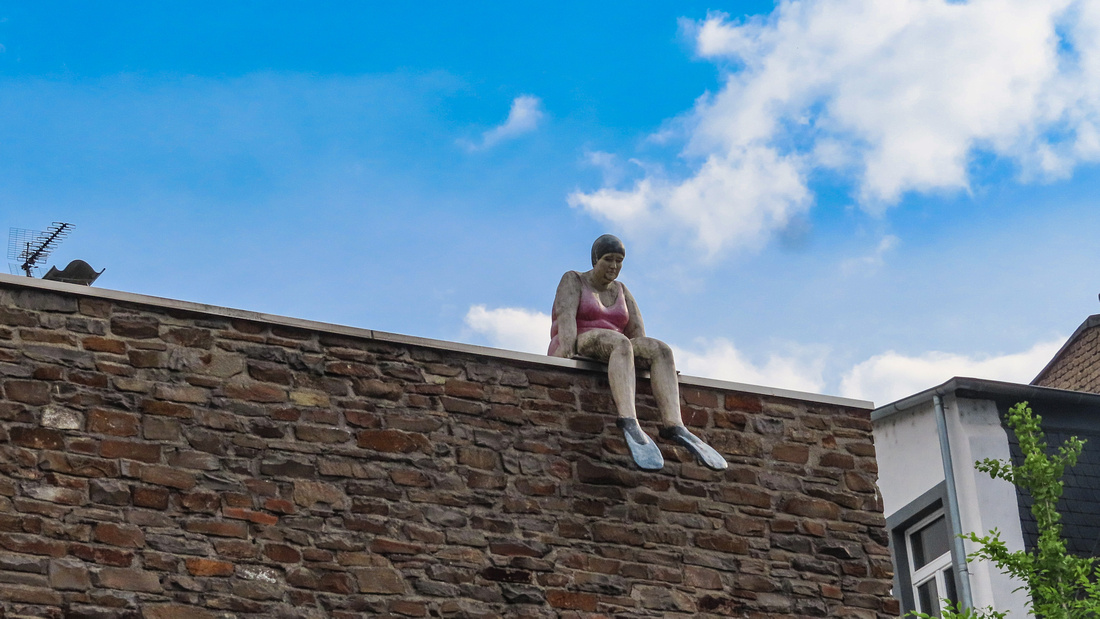 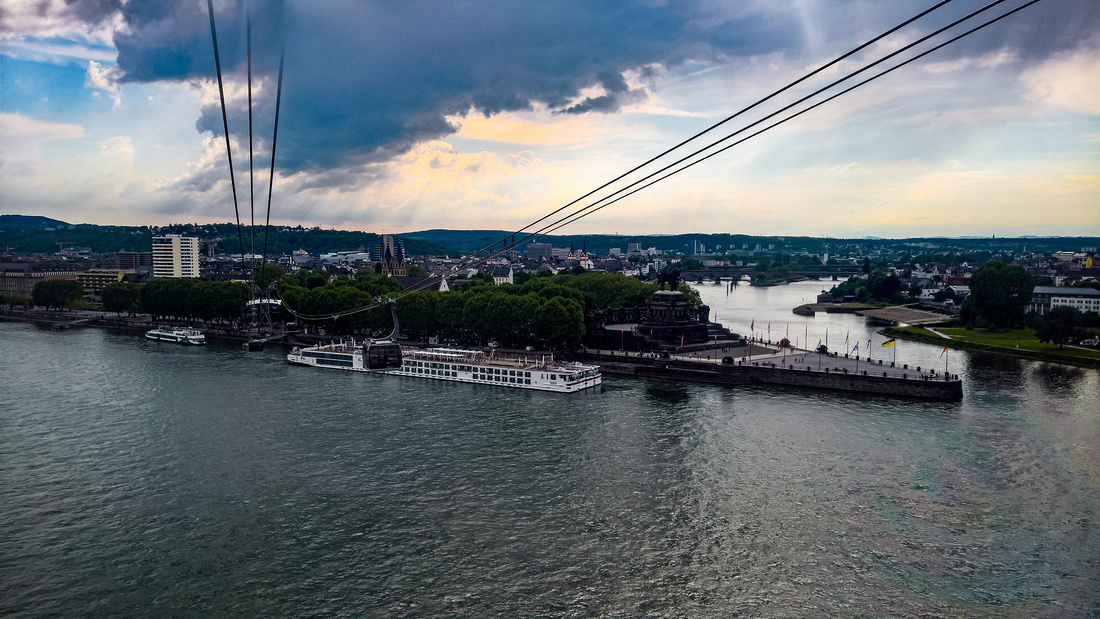 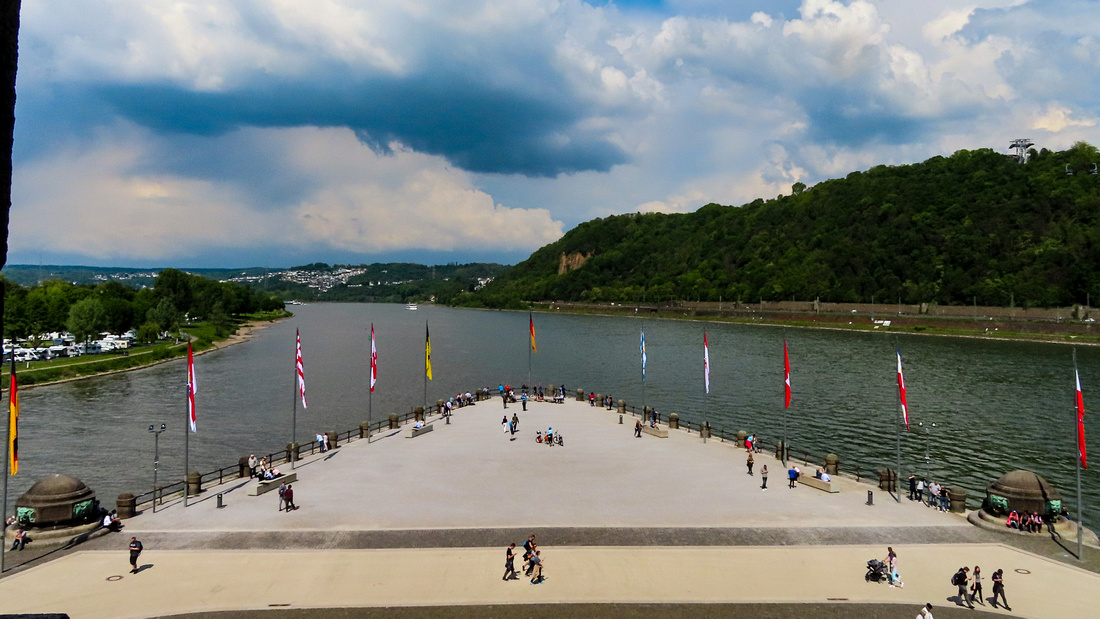 Deutsche EckMoselle to the port and Rhine to the starboard of the Deutsche Eck.

Weilburg’s history goes back as far as the year 906 C.E. in a chronicle by a monk. Its most important building is the Weilburg schloss/ castle, the former residential palace of the House of Nassau, Dukes of Nassau-Weilburg which later through inheritance became the house of Oranje-Nassau. Much later William Frederick of the Oranje-Nassau would become king William I of the Netherlands. It is a very well-preserved castle and worth a visit. 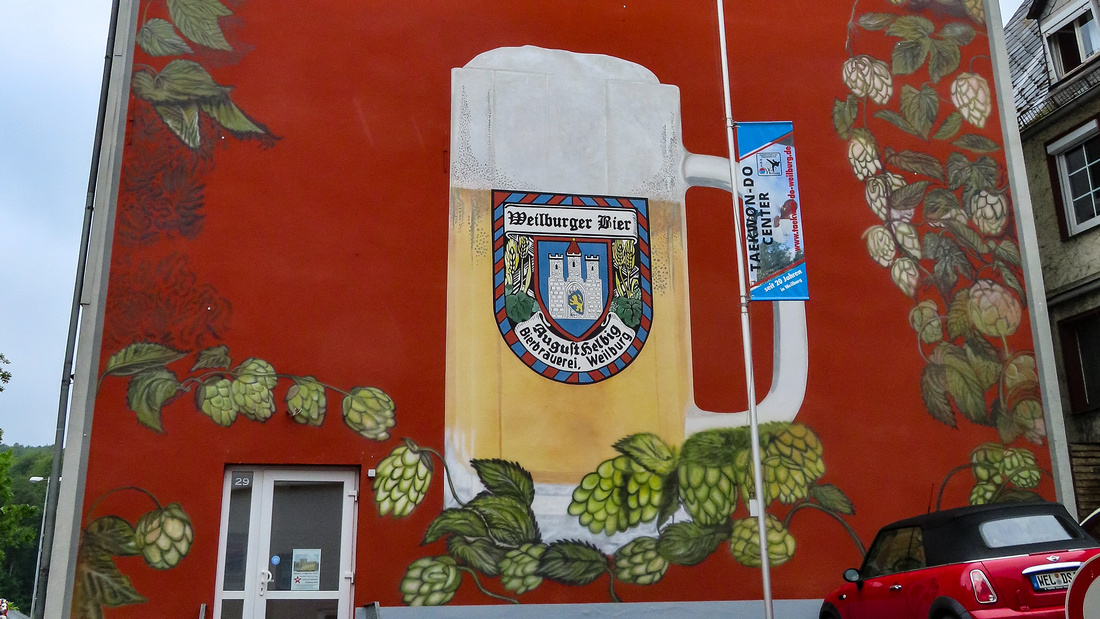 A beer is never far away in GermanyWeilburg 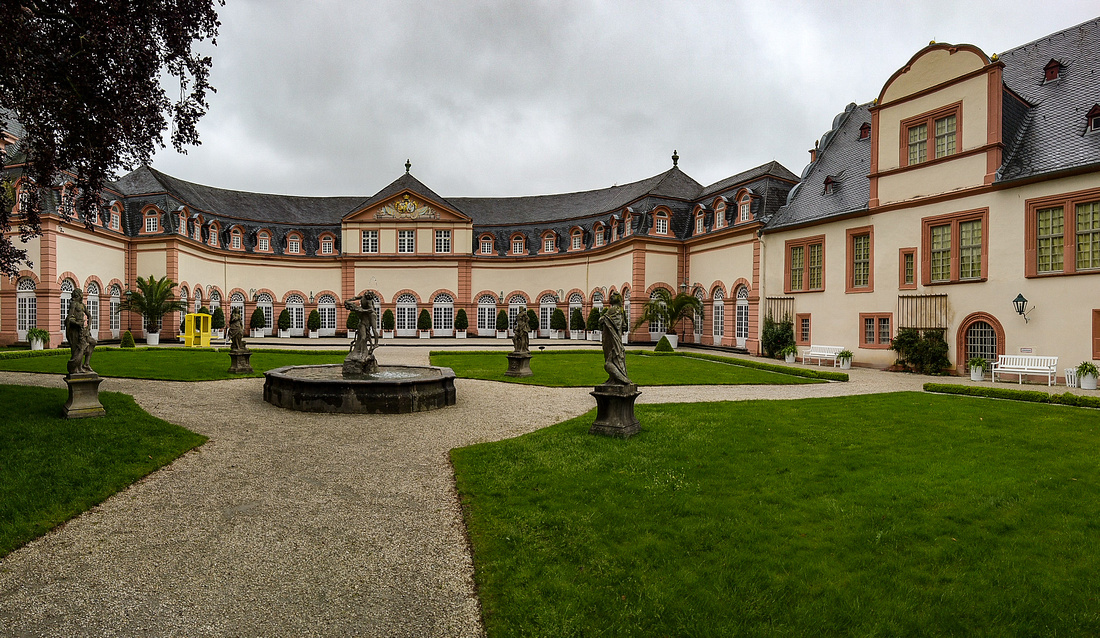 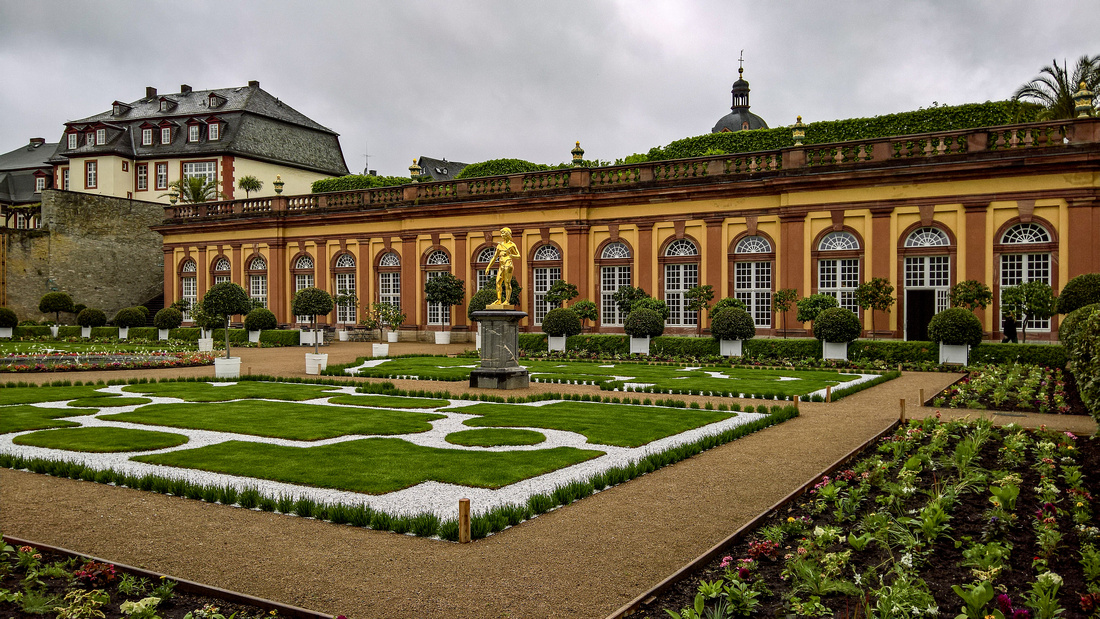 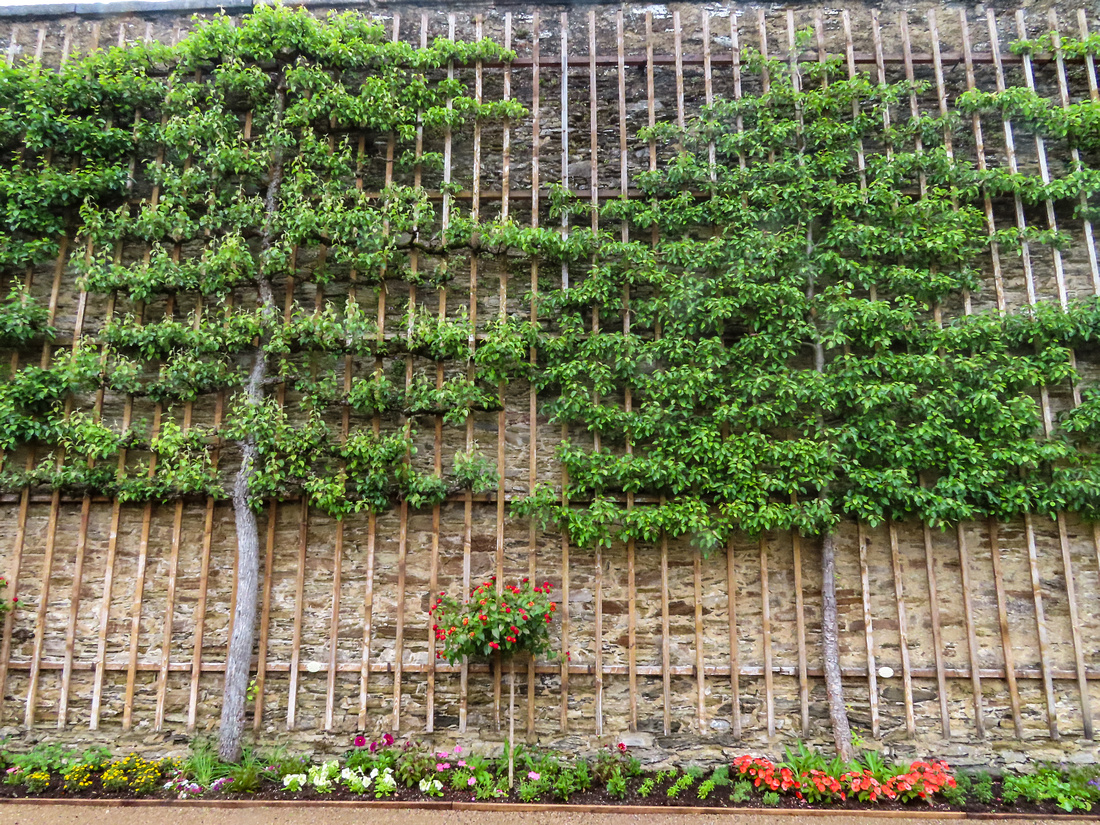 On our last evening, we enjoyed a fantastic dinner with Benny and Yvonne’s family. Benny, Julia and Vanessa were all in the same 7th grade. Yvonne and Vanessa went to Ballet class together. Fun reunion after all these years! 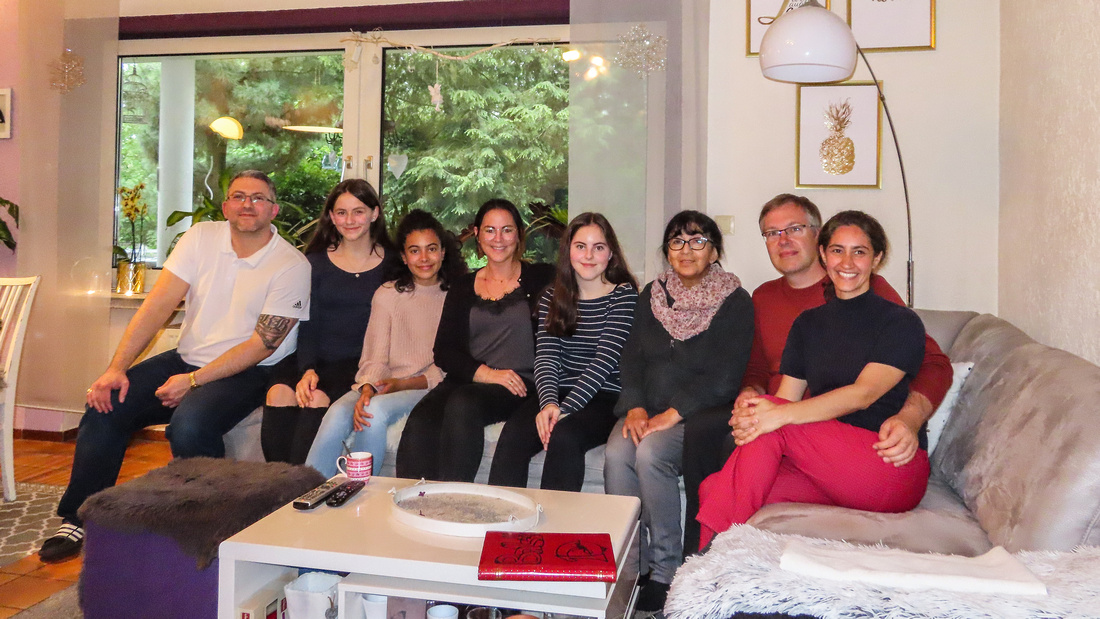 The next day, we drove back to Denmark. After a daybreak, back on the road to Sweden. By the time we reached home in Sweden, we had driven a little over 4,000 km.

*mouse over image to see captions.