After Paris, we rushed to Madrid to visit our friends, Izzat and Rebecca who were soon moving. 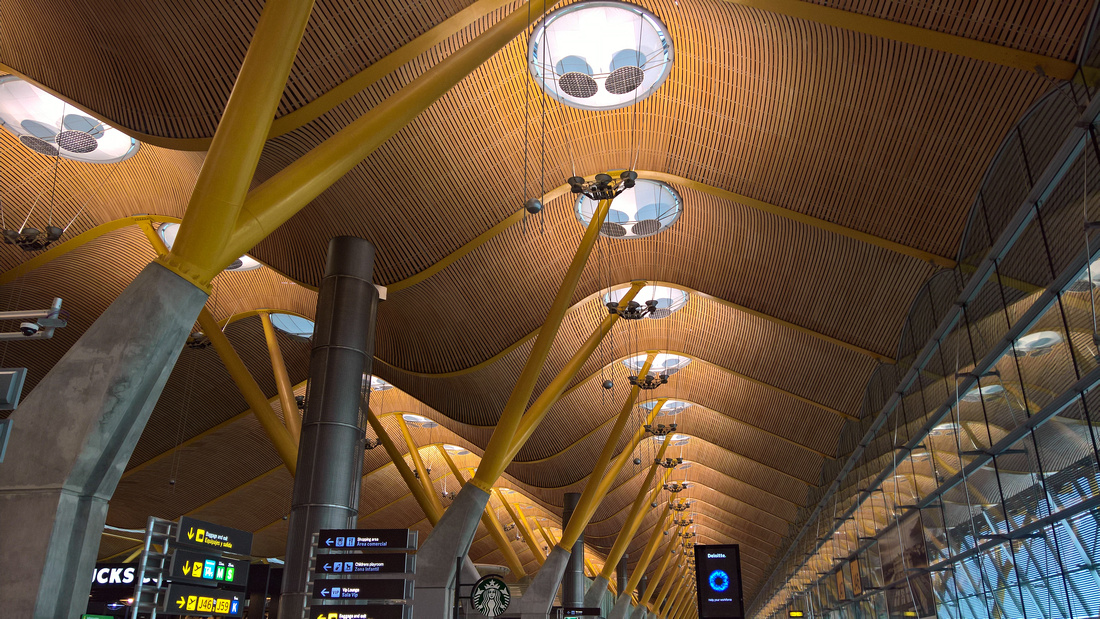 We spend four days with them exploring the city. 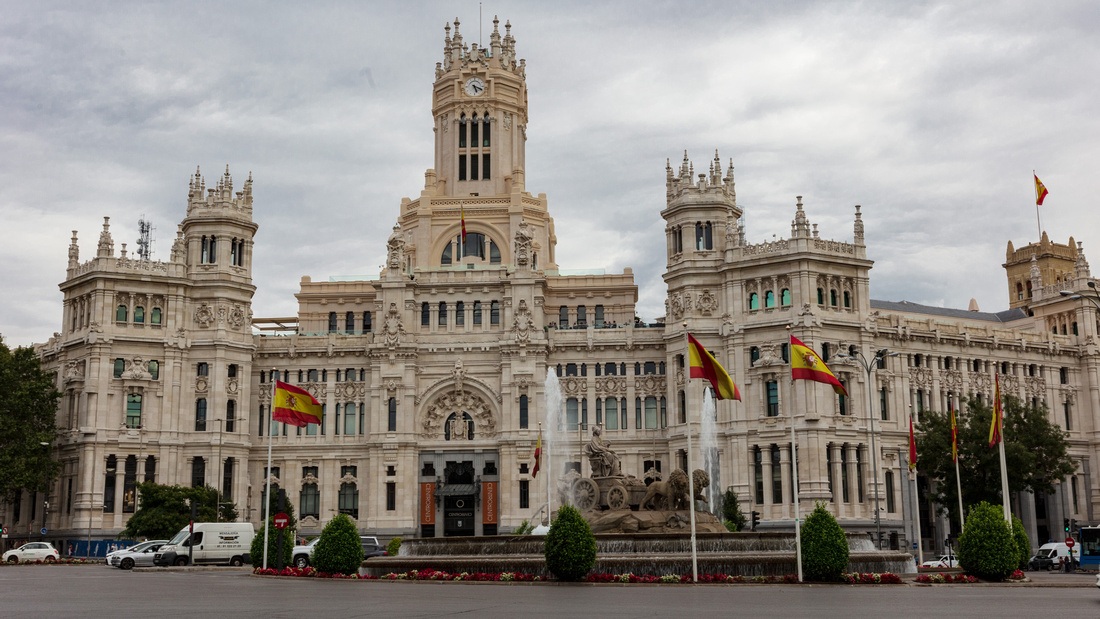 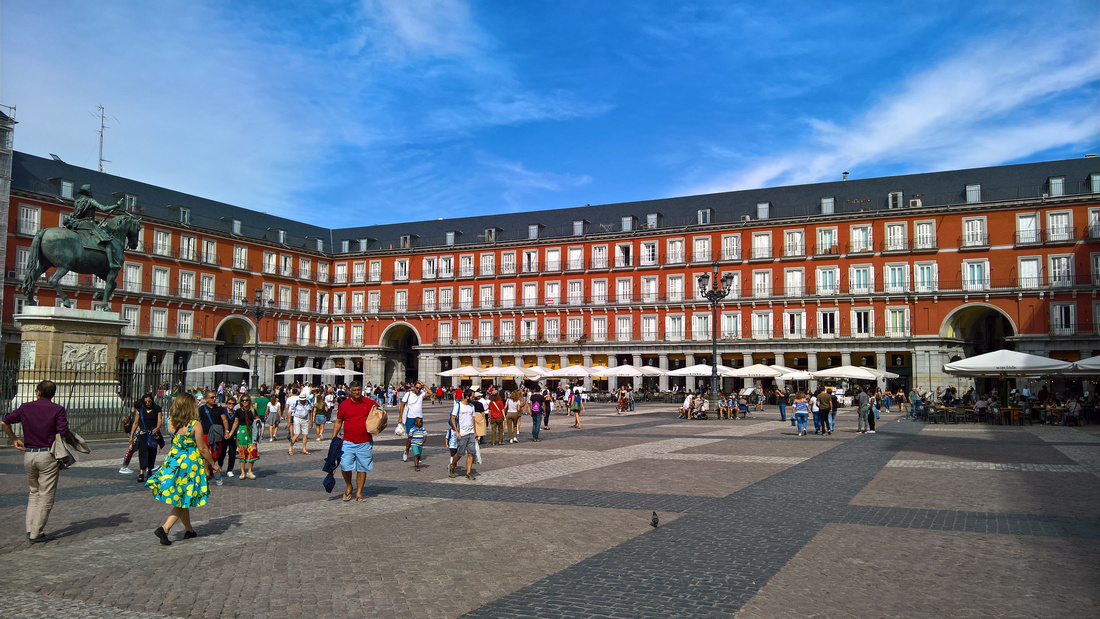 The day of arrival happened to be a Saturday and we got the proper introduction to Madrid and tapas. With every drink we ordered, they gave us a complimentary tapas. There are several theories about the origin of tapas, but the one we learned from our friends is that several hundred years ago, a law was passed that with every drink purchased a small quantity of food was to be offered at the same time. The food was to be served on top of the glass as to “cover” the drink. This would encourage people to eat something before they consume their alcoholic beverage. The purpose was to help slow down the effect of alcohol. The word “tapa” in Spanish (verb= tapar) means “cover” in English. We lost track of the places we checked out, but it was at least 5 or 6 bars. We had a lot of fun, with among other things Basque Cider being poured in a long stream to aerate it. 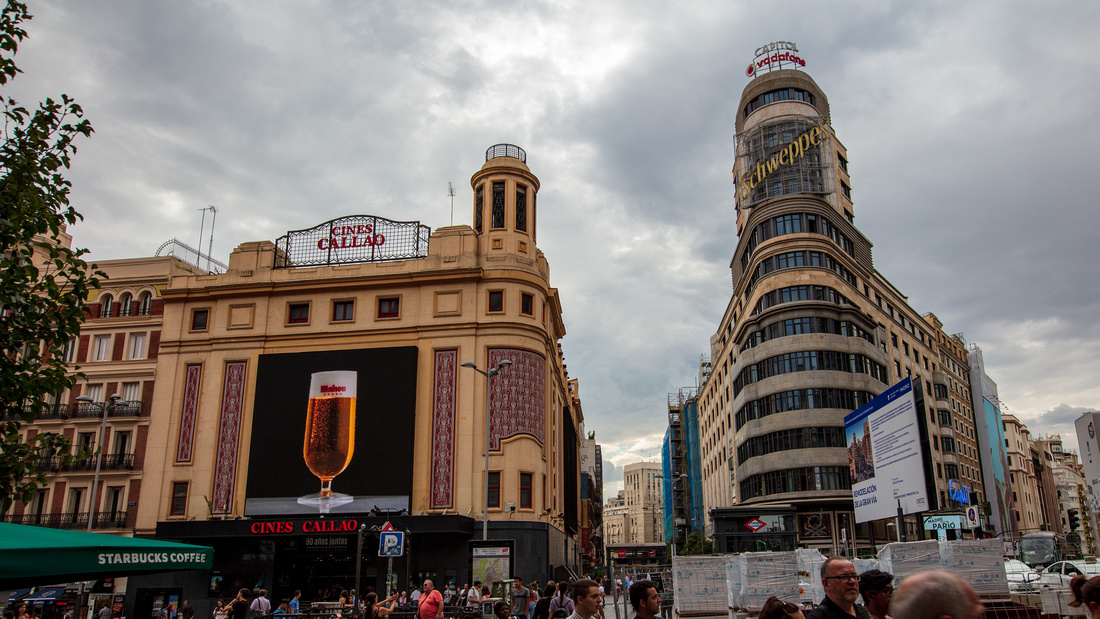 With the many bars it's always caña time in Madrid.Caña - a small beer often the local brewed Mahou. 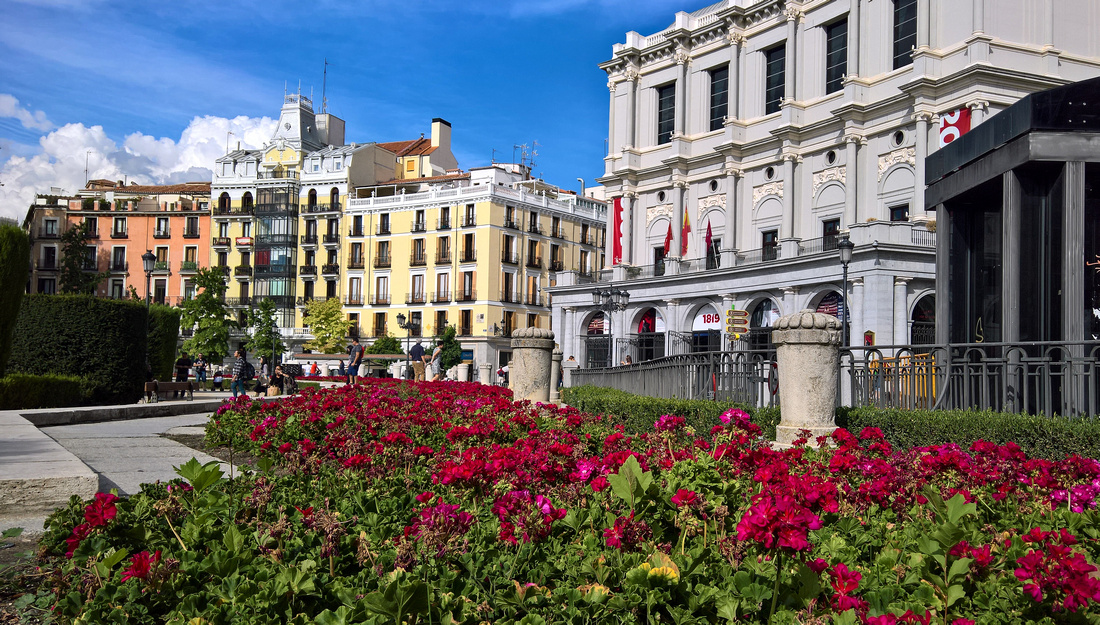 Sunny day at the Teatro real MadridJust across from the Royal Palace. 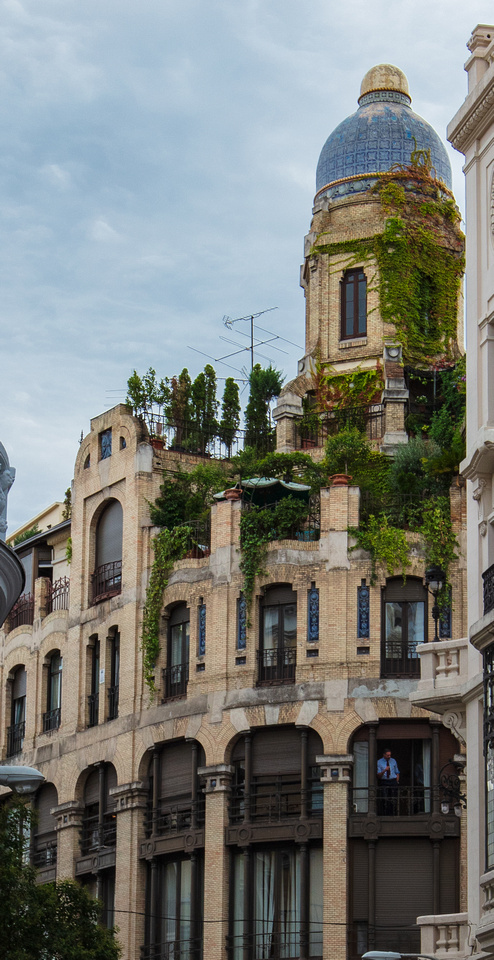 During the rest of our stay, we checked out some of the city’s highlights and enjoyed being shown around by our wonderful friends. A few of gardens we really enjoyed were the Botanical Garden which was started by the Royal family in 1781, the Retiro Park which is the largest park of the city and Parque Madrid Río, possibly the best urban park we have ever visited. 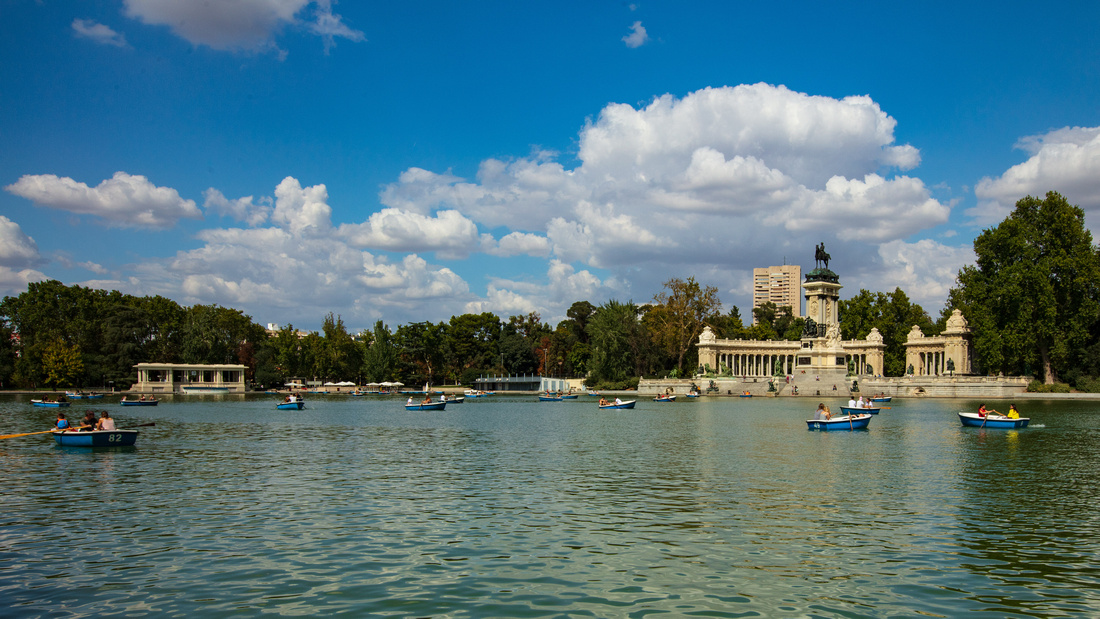 Retiro parkIt was about 95 degrees F and a mystery why people were out in the little row boats. 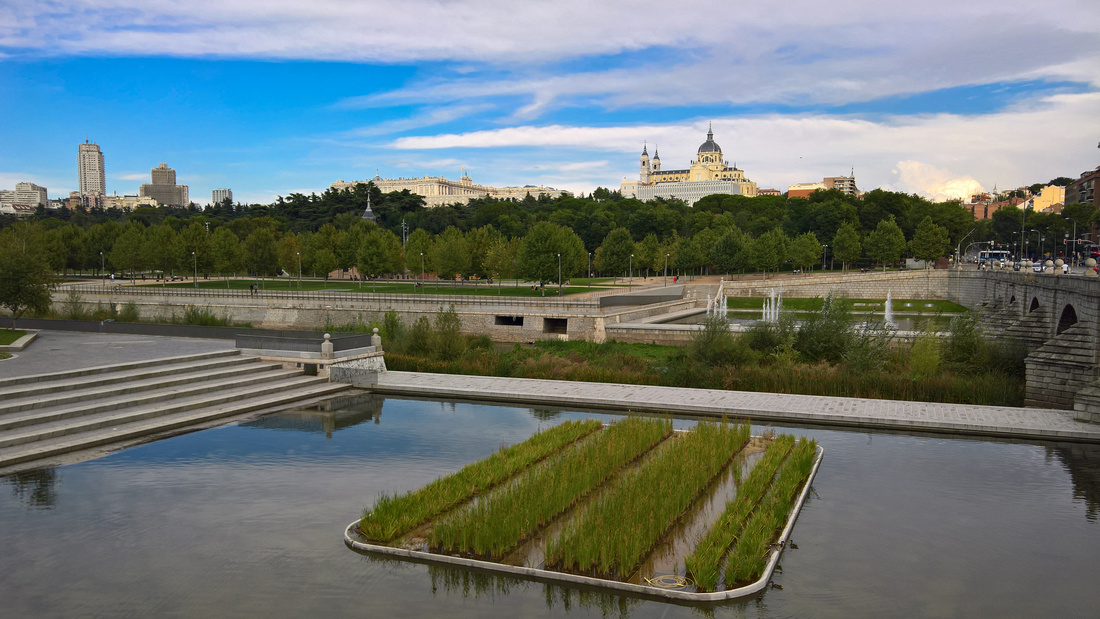 The Royal Palace and Almudena Cathedral View from the Rio park. 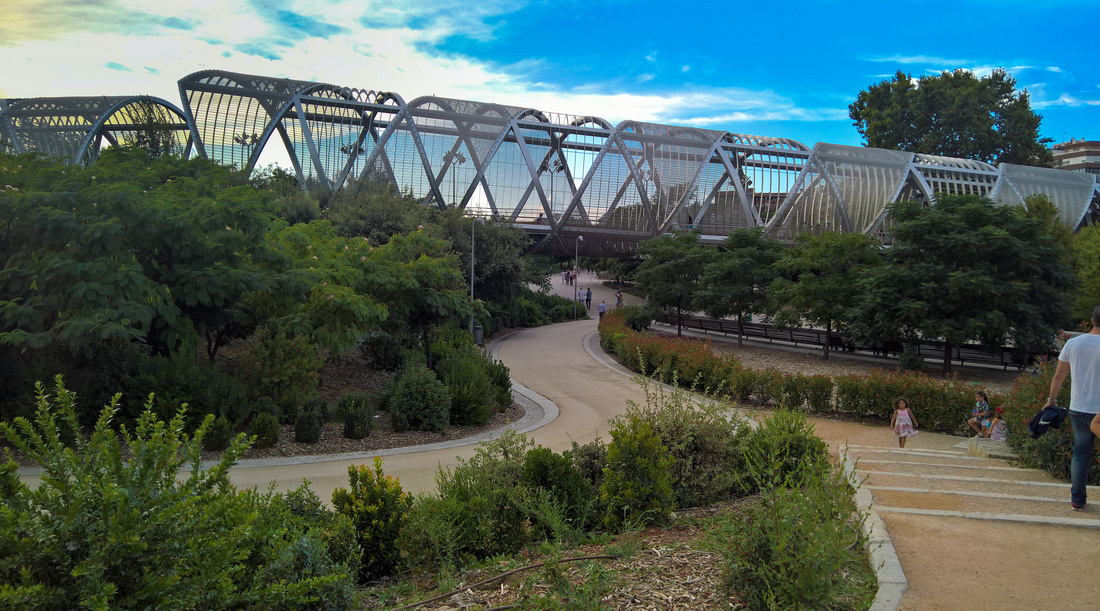 Pedestrian bridge in Rio park.What makes this park so great is that it used to be the M30 freeway loop around Madrid. The M30 is still there, just underground.

After 4 busy days, we were extremely grateful to Soren’s college friend Carlos who let us stay at his family vacation home in Santa Pola. We completely let loose, relaxed and got lazy. And we didn’t feel guilty about it. Santa Pola is a town of 30,000 people and just 13 miles from Alicante. It is most reputable for its many miles of long white beaches and it has a very interesting Salt Flat Nature Reserve. There is a museum in the former salt factory explaining the processes of salt extraction, the different uses, its history and impact on the economy. In the museum, there is a great lookout for bird watching too. They even have a telescope and a several listing of all the birds you might be able to see. 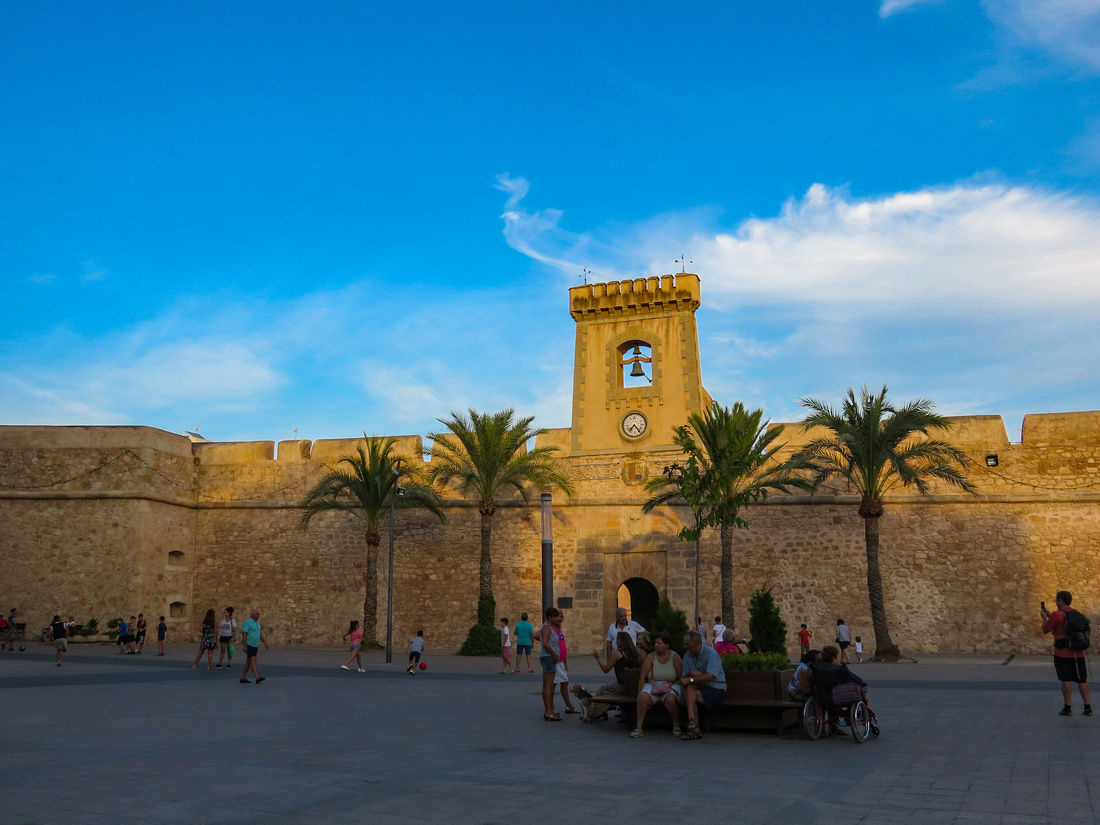 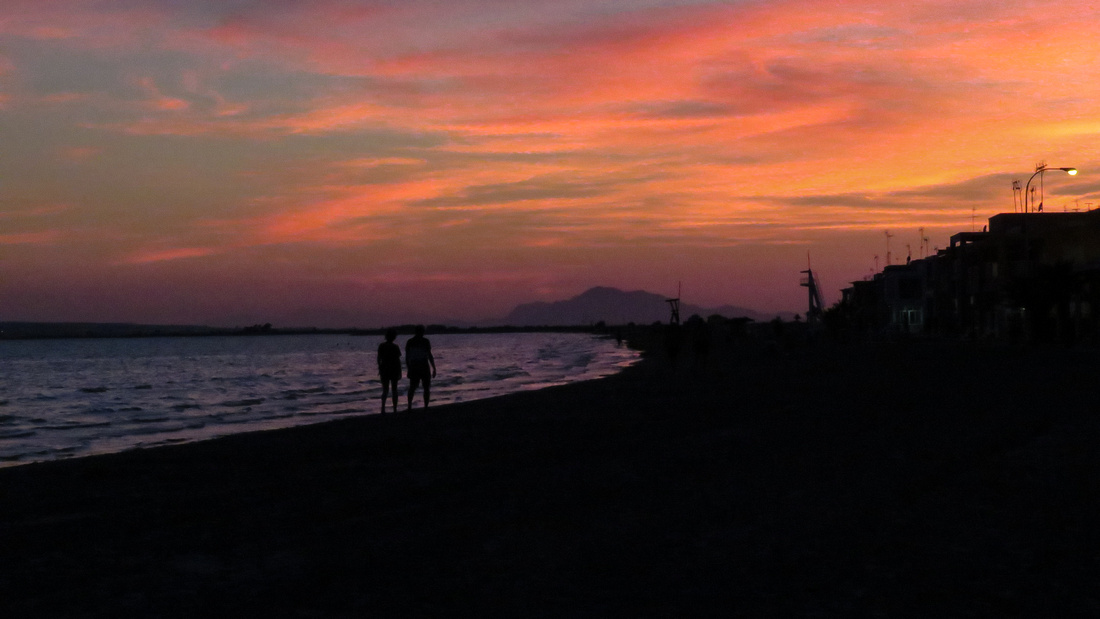 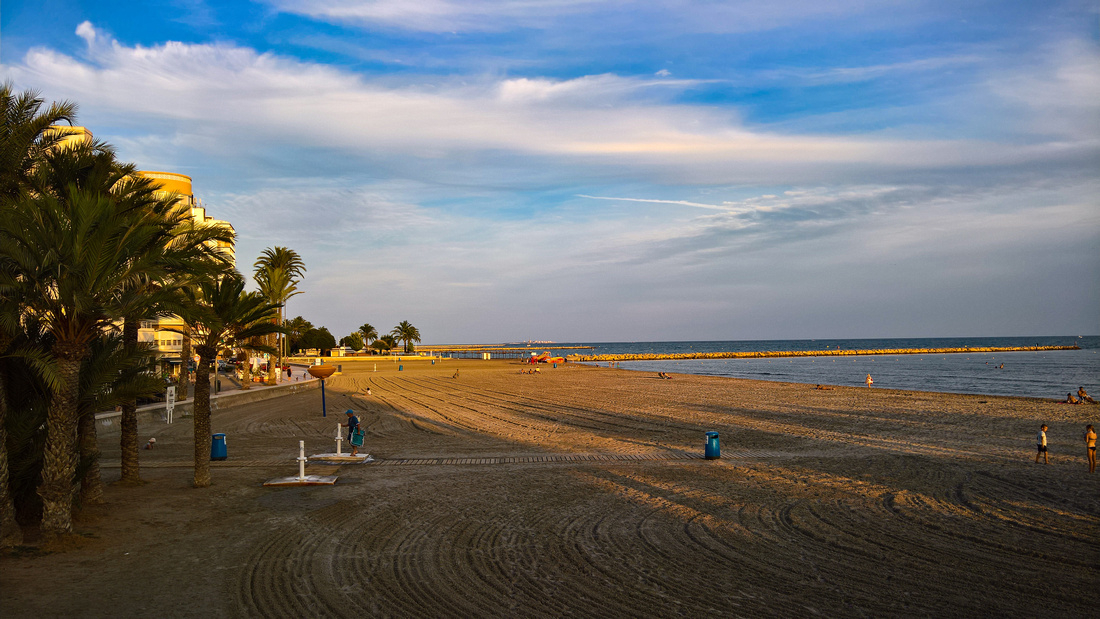 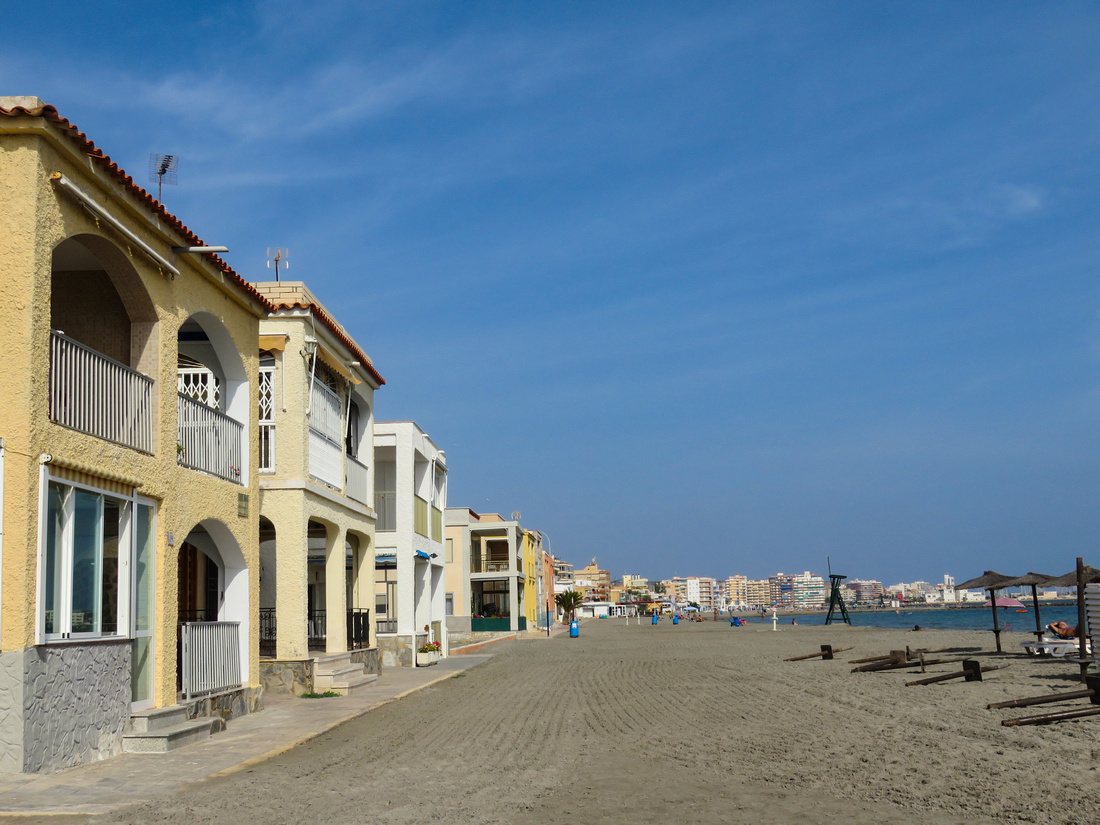 From Santa Pola, we did a couple of day trips: Alicante and Elche.

Alicante is the capital of the province Alicante and an important port city. We spend the afternoon hiking to the top of the Castillo de Santa Barbara.  We went through the old neighborhood (Casco Antiguo) with the white walls and blue or green shutters. People had really nicely decorated their homes with various plants and flowers.  From the top of the castle, we had panoramic view of the city. The Mediterranean is quite beautiful from above. 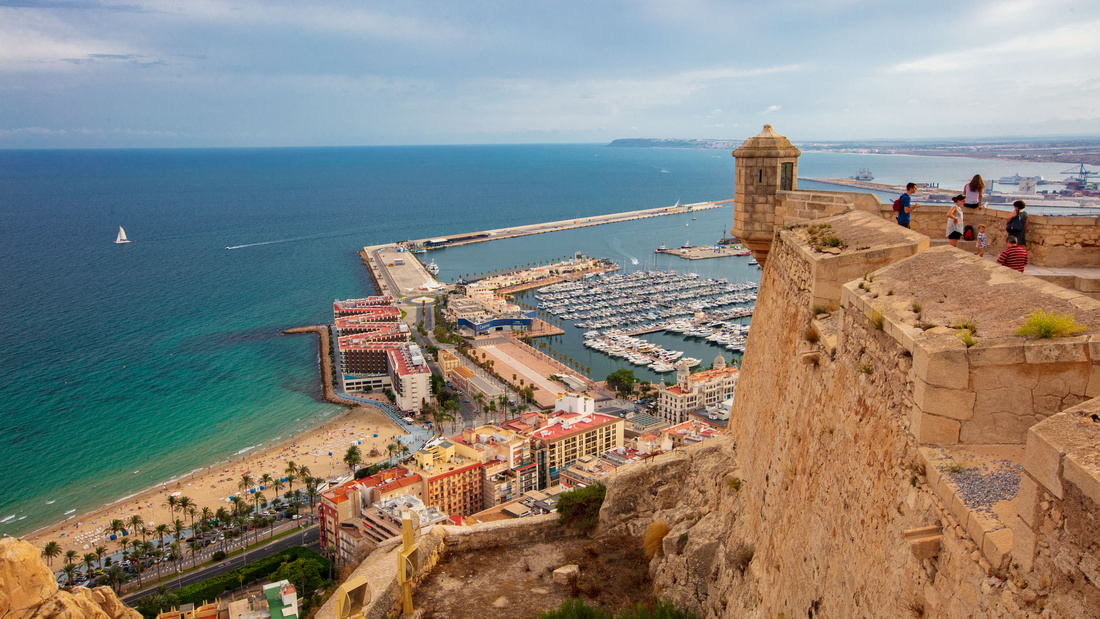 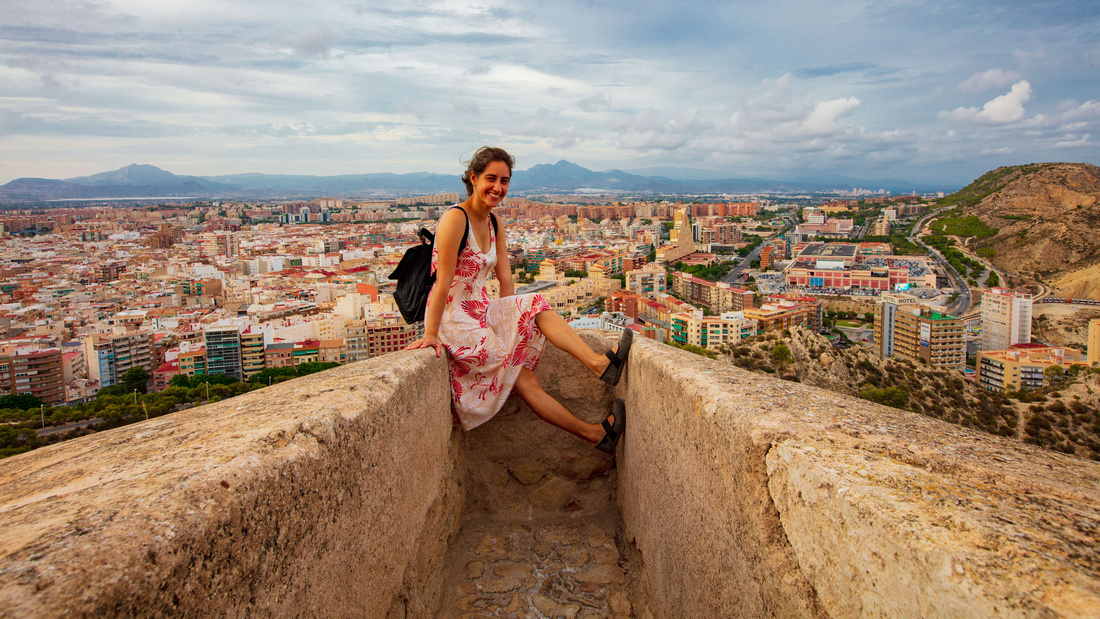 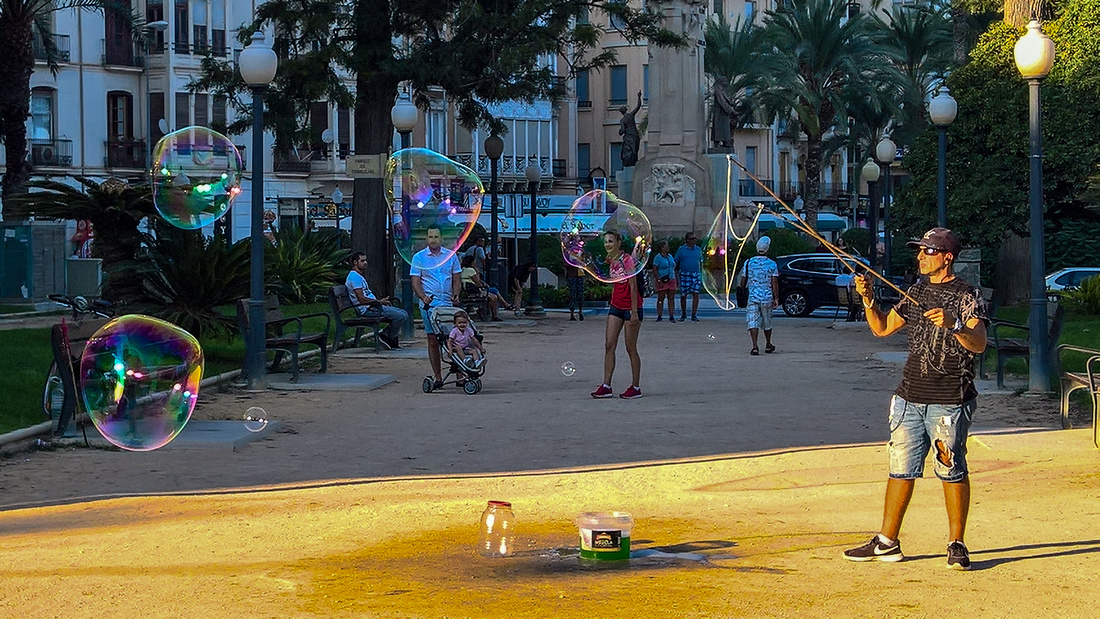 Elche is about 20 minutes by bus from Santa Pola. In 2008, they won the Reina Sofia prize for accessibility. The pedestrian areas in the center of city are all wheelchair accessible. That’s amazing for a European city. But what gives Elche (or Elx as it is called in Valencian) its beauty are the Palm Groves. There are more than 200,000 palm trees. It’s stunning to see the variety and the different height of these trees in such proximity. We read that there is nearly 4 million m2 of green areas; that’s more than 20 m2 per inhabitant. It is said that the Carthaginians who settles in southeast Spain could have originally planted the first date palms in Elche. There are other possibilities who it might have been, but we’ll go with this one. Centuries later during the control of the Moors (711 to 1492 CE), the irrigation system was developed which is still in use today. To protect the palm groves the site was declared a World Heritage Site by UNESCO in 2000. 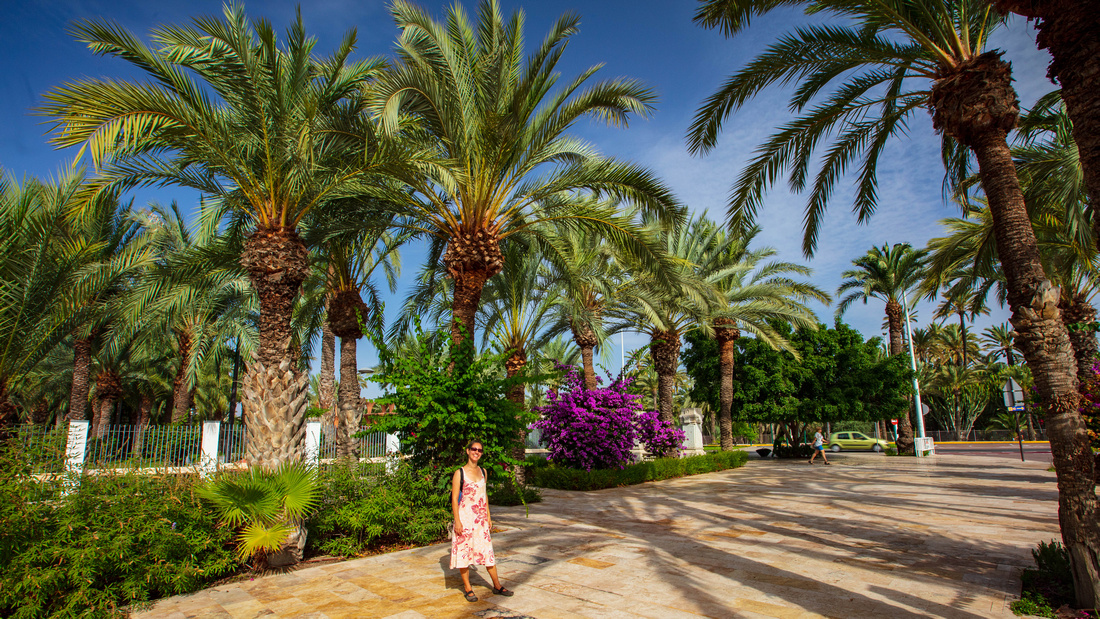 One of the many parks in Elche 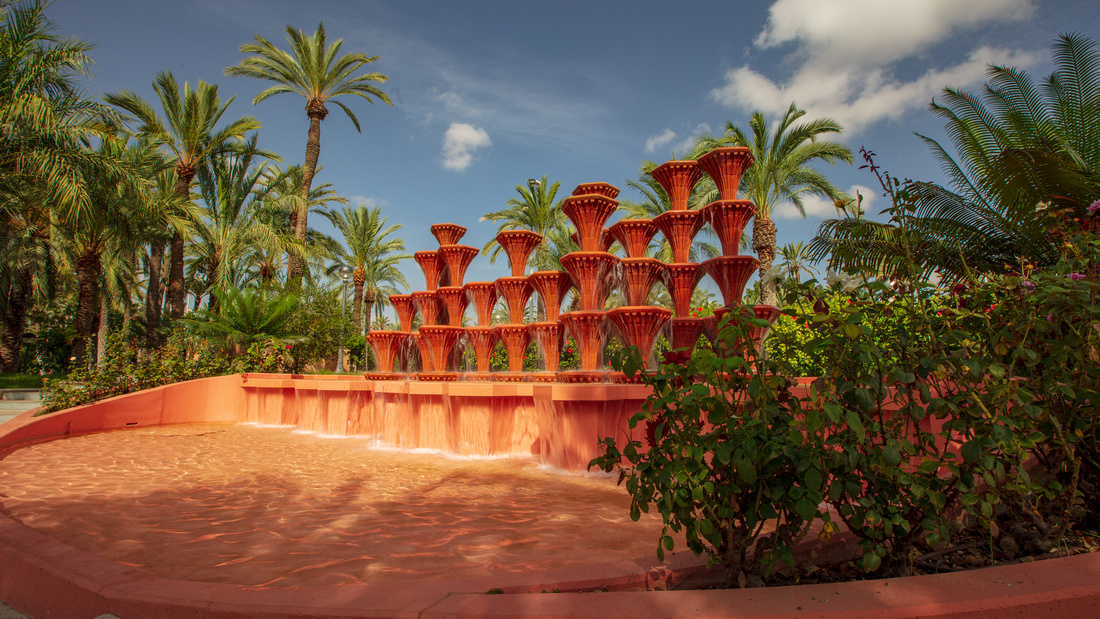 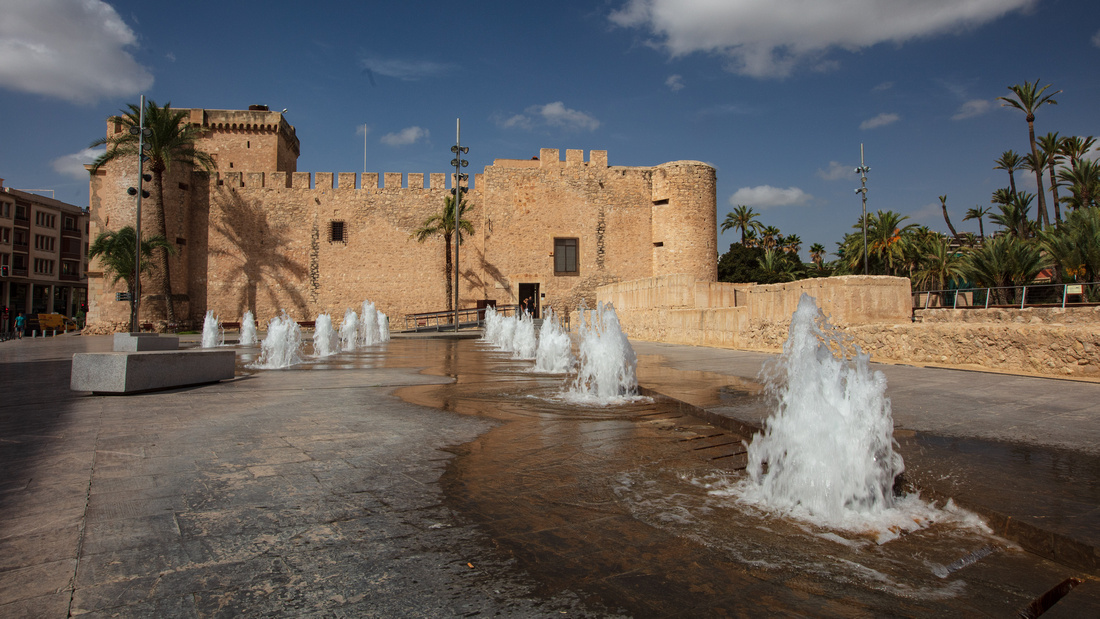 Altamira Castle in ElcheBuilt in 12th – 13th century by the Almohad Caliphate. Now it is the archeological museum 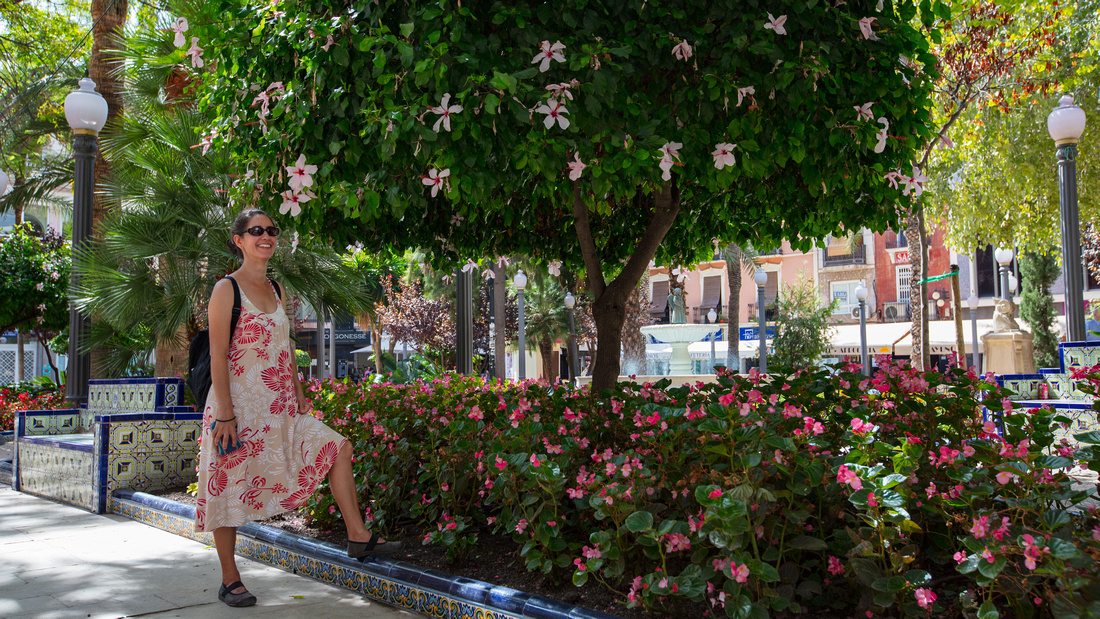 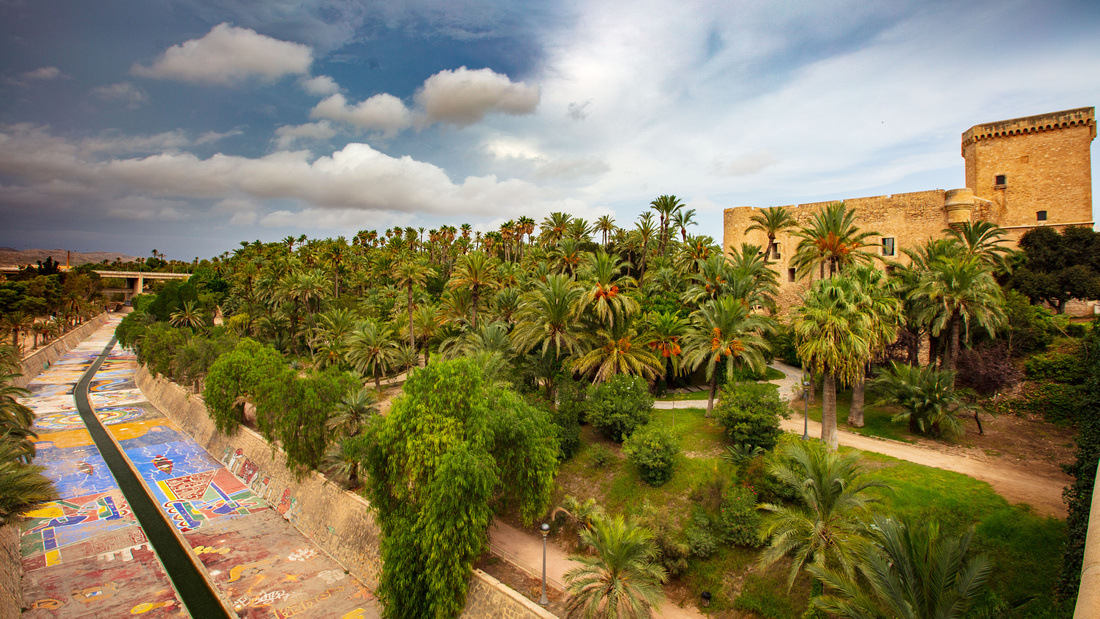 All this history was fascinating. Next, we went to Granada, in the south of Spain. We’ll tell you more about this city in the next blog post.

*mouse over the image to see the captions.

Allison(non-registered)
I loved revisiting Madrid with you. I love this city, especially the way it is laid out. Continue on your journey, you have a lot of friends traveling with you vicariously.
Derik Rawson(non-registered)
Very nice history lessons to make the tour more interesting. Good photos of a cute girl. I am glad that you guys are having fun. Looking forward to the next installment.
Big Hugs
Derik
Sherrie James(non-registered)
I love learning more details as you explore and explain.
We're right behind you!(non-registered)
Thank you for sharing the Madrid and Santa Pola inspiration. Nan and I will head that way in the coming week. First To Barcelona/Girona then will head down to Andulacia. We will finish up in Madrid after Cordoba, Seville, Jerez, Arcos, Ronda, Granada, and Toledo. Wish we could meet you for Tapas and Vin Tinto somewhere. Safe travels!
No comments posted.
Loading...
Recent Posts
Sun sets on our travels! Sayonara Japan Along the Seto Inland Sea, Japan Osaka, Japan A week in Taiwan Vietnam - Hanoi & Tam Coc Thailand, the land of smiles Midsummer in Sweden Buenos Bergen, Norway Baustelle & Stau - Road Trip to Germany
Keywords
Argentina Sweden Osaka Buenos Aires Chile Asuka Danjiri Fushimi-Inari Kendo Kofun
Archive
January February March April May June July August September October November December
© Terralinda
Powered by ZENFOLIO User Agreement
Cancel
Continue