After leaving the vast, beautiful, hot and dry Death Valley, we continued our drive. We took a couple of brief breaks to enjoy the views and getting out of the car.  The first stop was just after the Hoover dam with a nice view of the Colorado river. The next stop was Cerbat Foothills/ Coyote Pass Trailhead west of Kingman, Arizona. For dinner, we stopped in Flagstaff, Arizona. The whole area felt like Oregon with the greenery, tall trees and cooler temperature.  We will have to come back to explore this area. 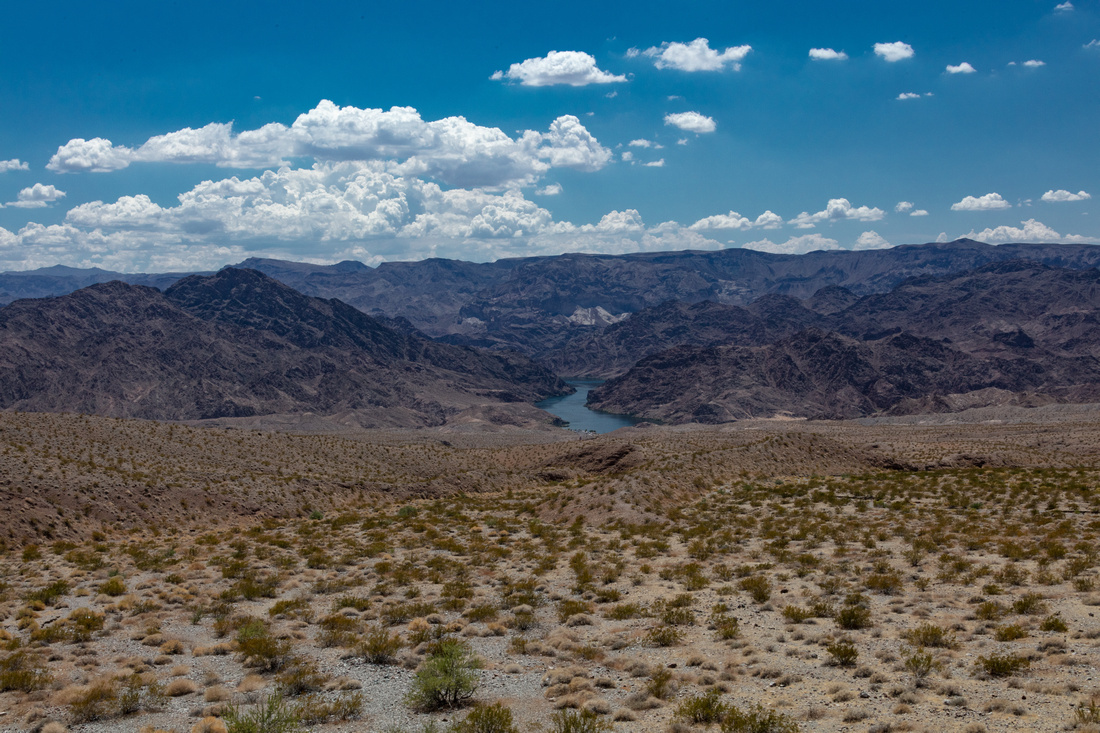 Colorado River A snack stop with a view. 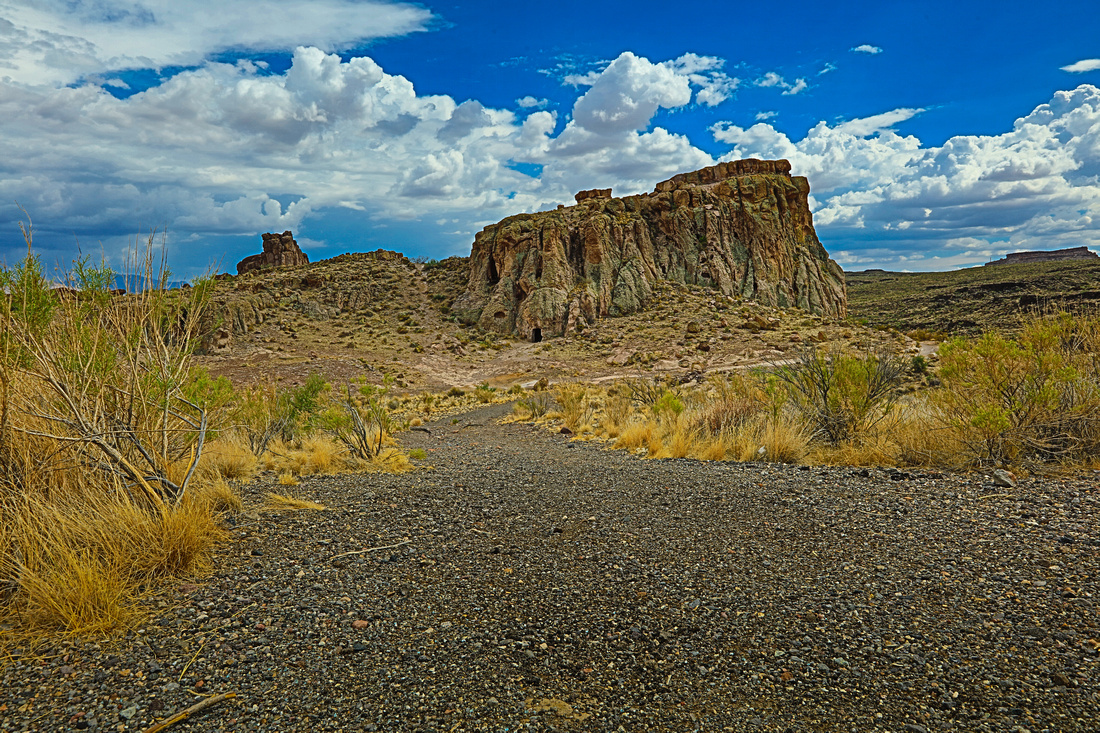 As we wanted to get some miles behind us we drove until we were too tired to continue. We stopped in a small town called Holbrook, Arizona which has a population of a little over 5,000 and was founded in 1881 or 1882, when the railroad was built, and named to honor the first chief engineer of the Atlantic and Pacific Railroad. 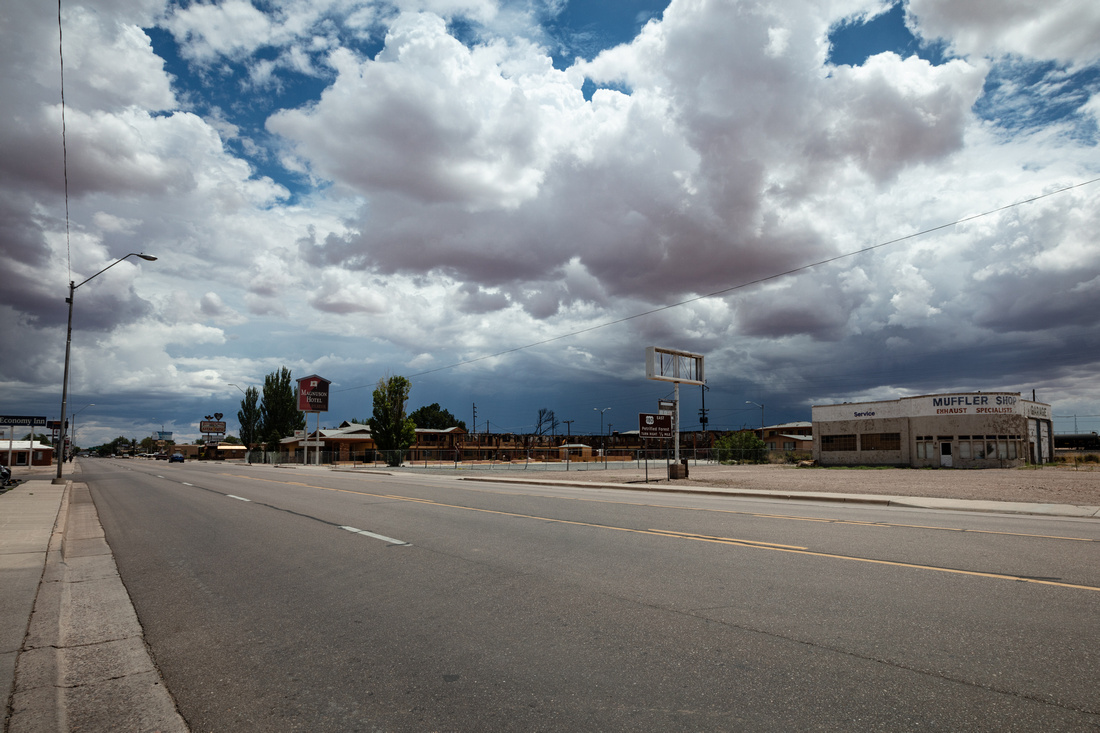 Dark Clouds over Highway 66In Holbrook 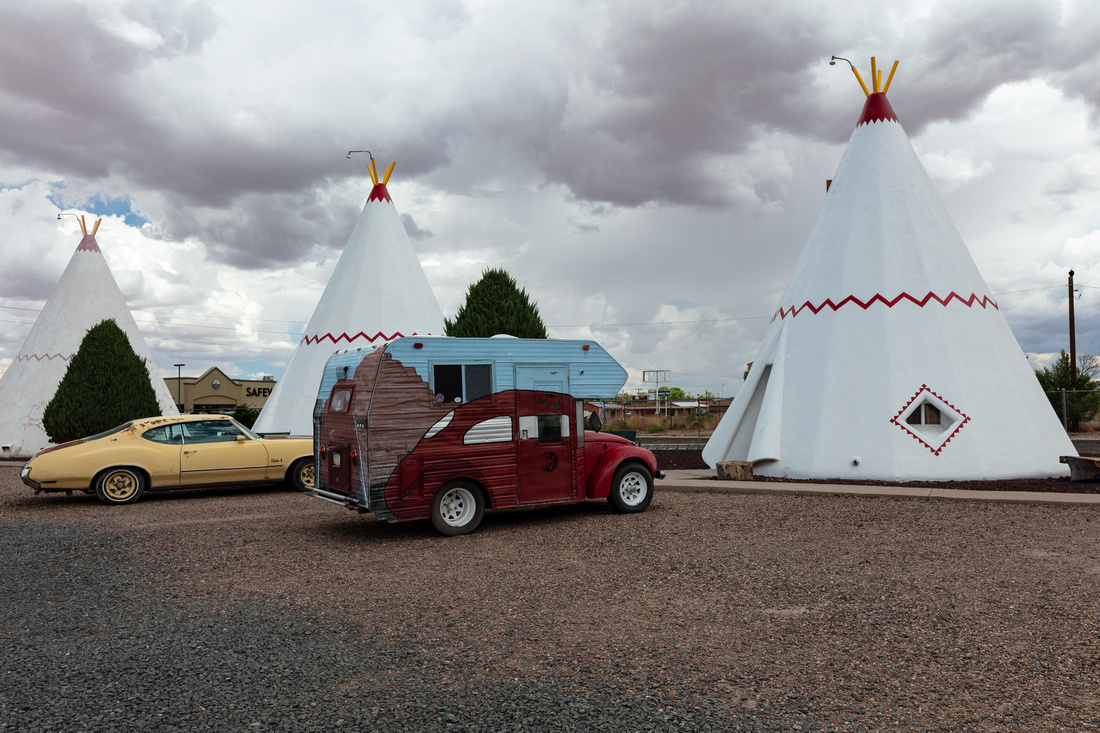 Wigwam MotelWe didn't stay but it is open and the wigwams are quite spacious.

This turned out to be a lucky draw.  It was very close to the Petrified Forest National Park and we spent the entire next day exploring a very different forest compared to the Redwoods and Sequoia.  It is stunning, and we were incredibly lucky with the weather too. We ended up staying until the closure of the park and a ranger escorted us out. 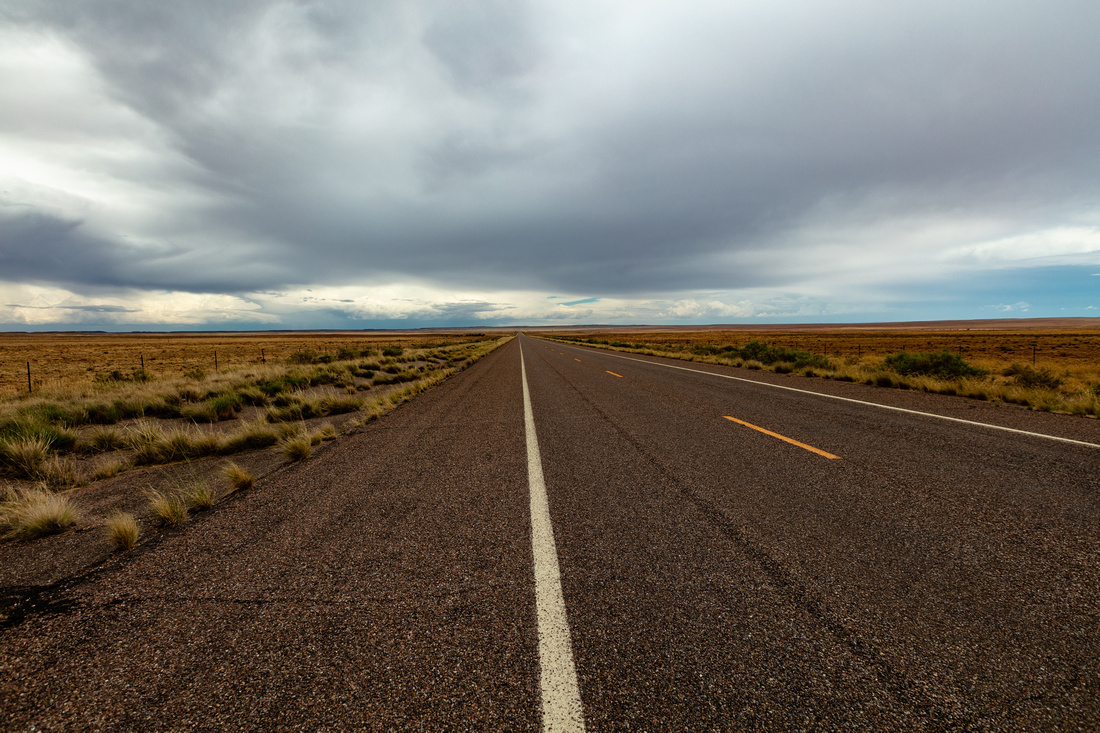 Parallel LinesHard to imagine this was once a lush forest. 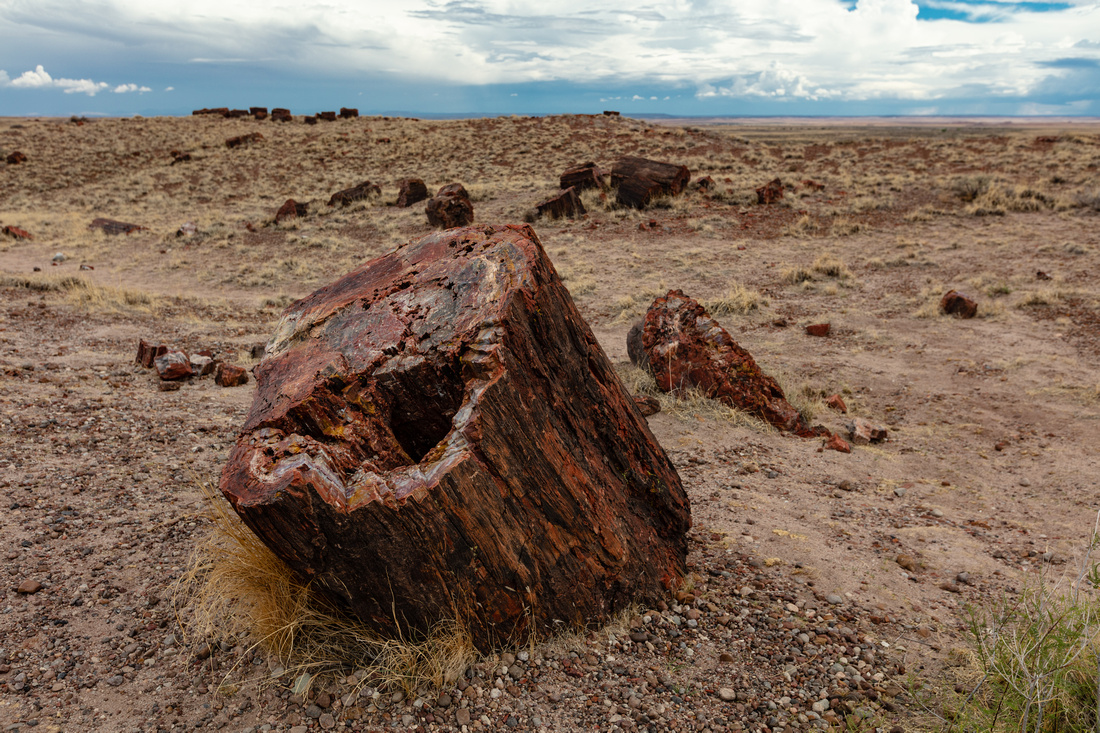 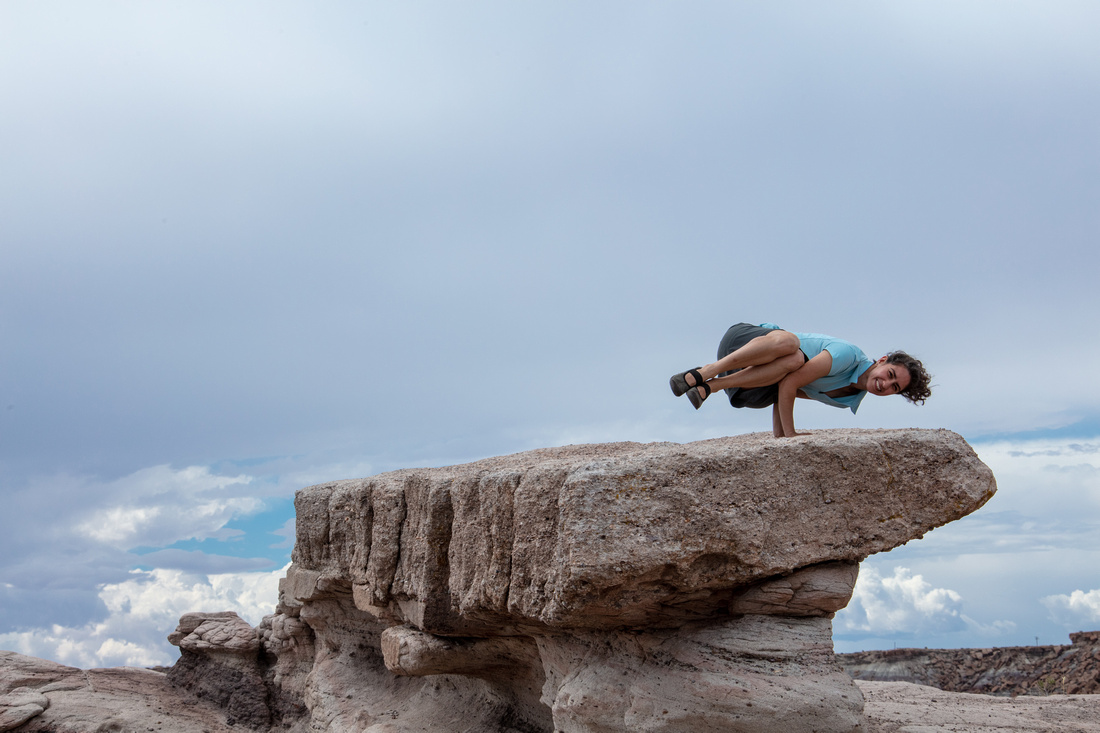 Yoga RocksToo much sitting in the car.

It was fascinating to see and learn about the petrified trees. Over 218 million years ago, this area was closer to the equator and was a living lush green forest near water. Gradually the land shifted, and the climate dried out. To make petrified wood you just have to follow these easy steps: 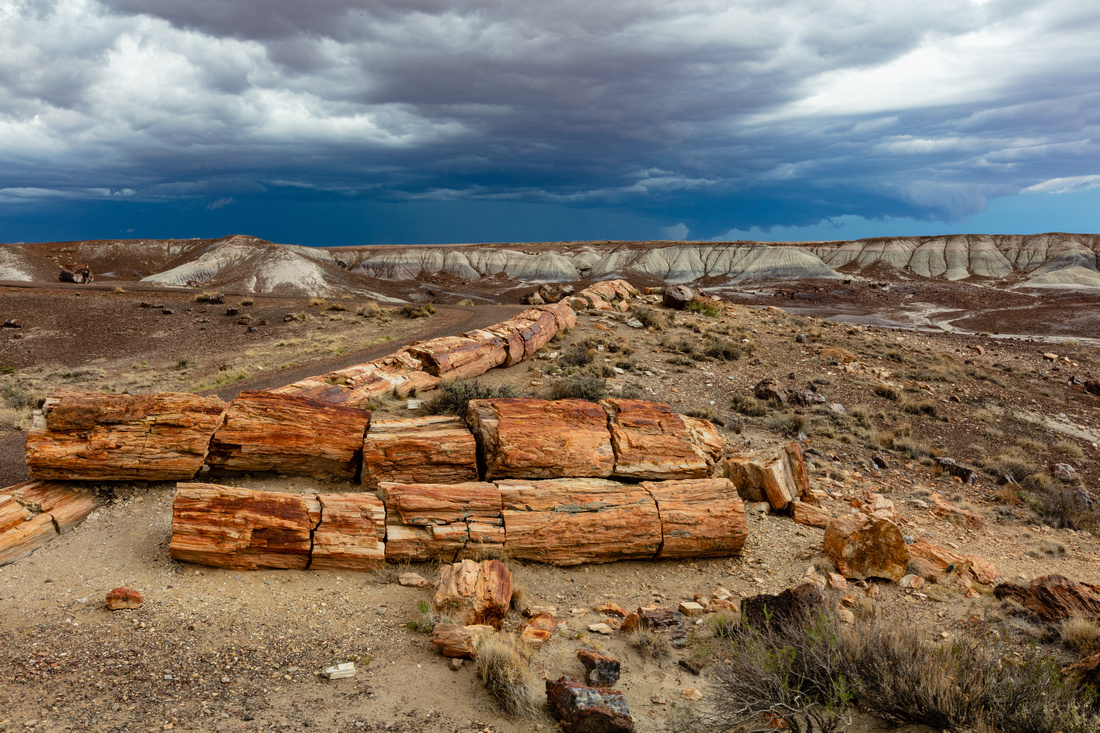 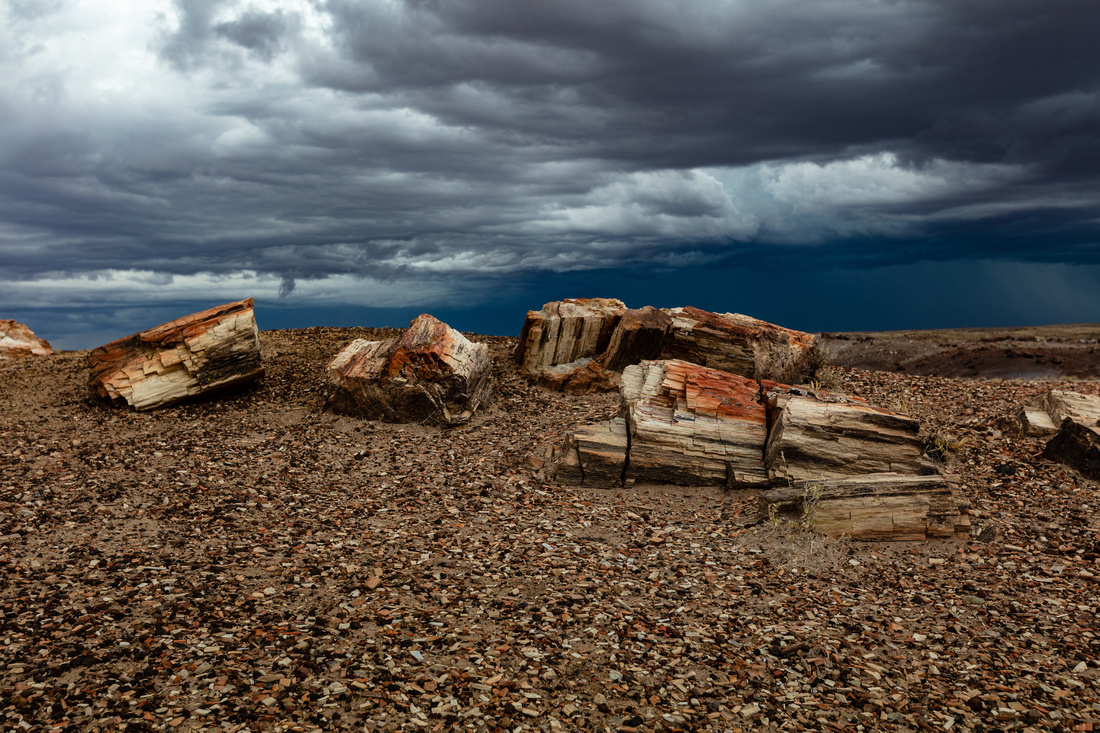 Bring it on!I've been around for a while and can handle some bad weather. 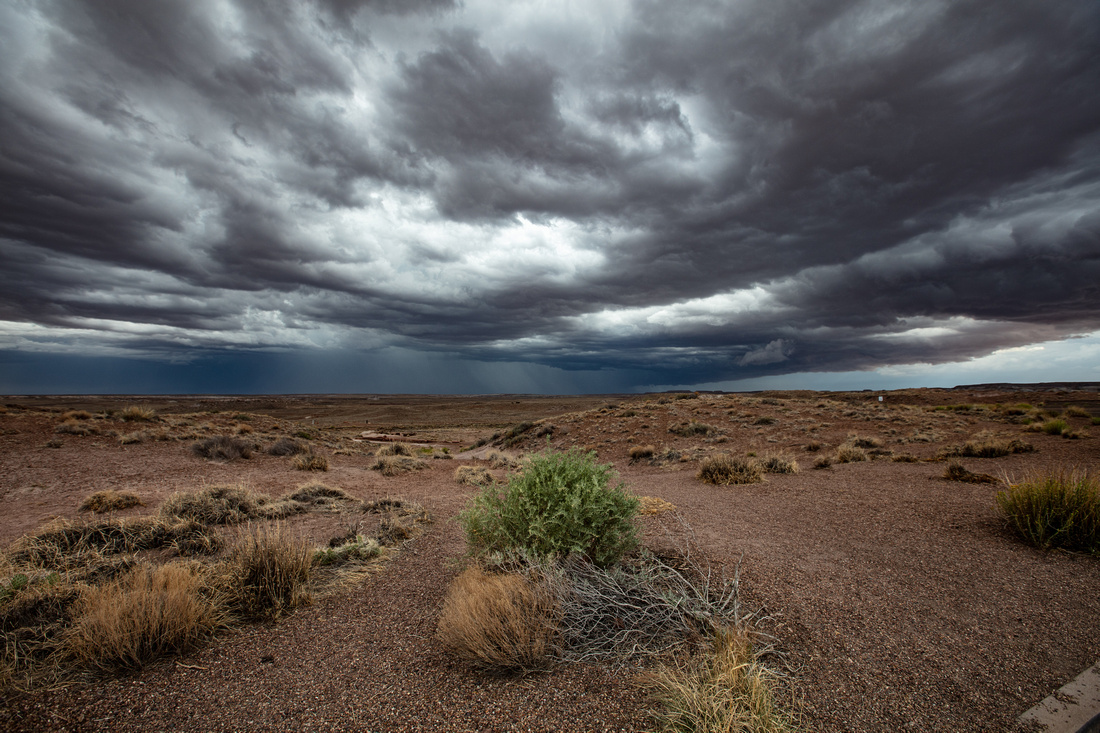 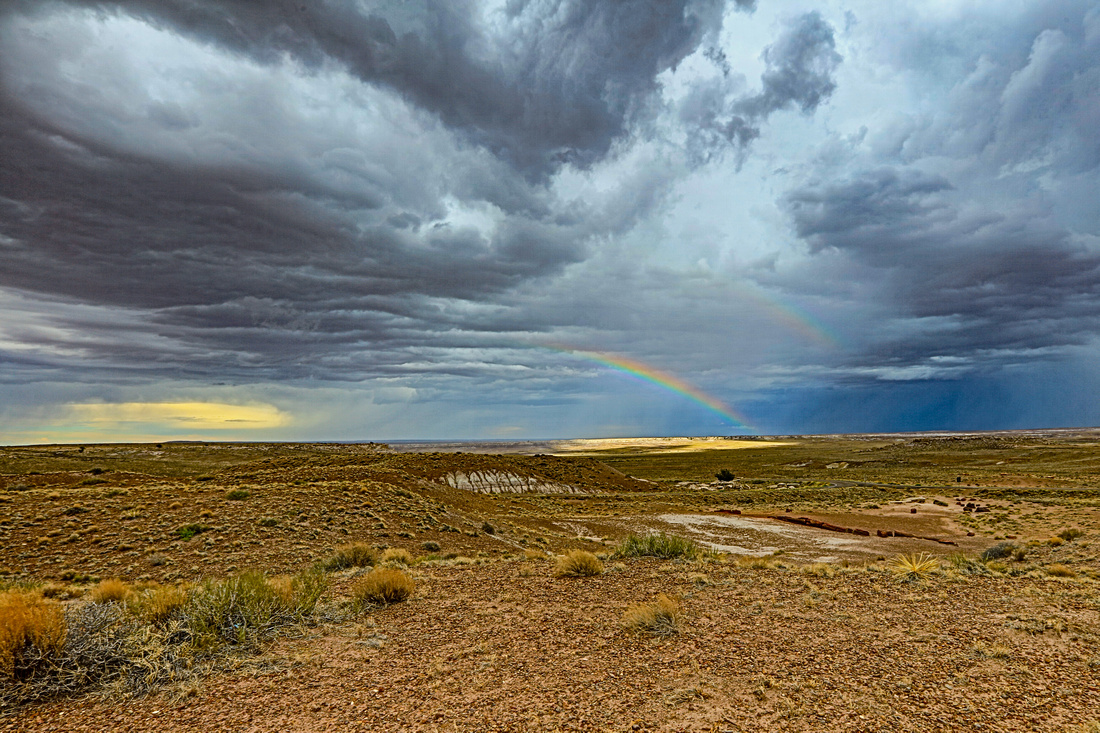 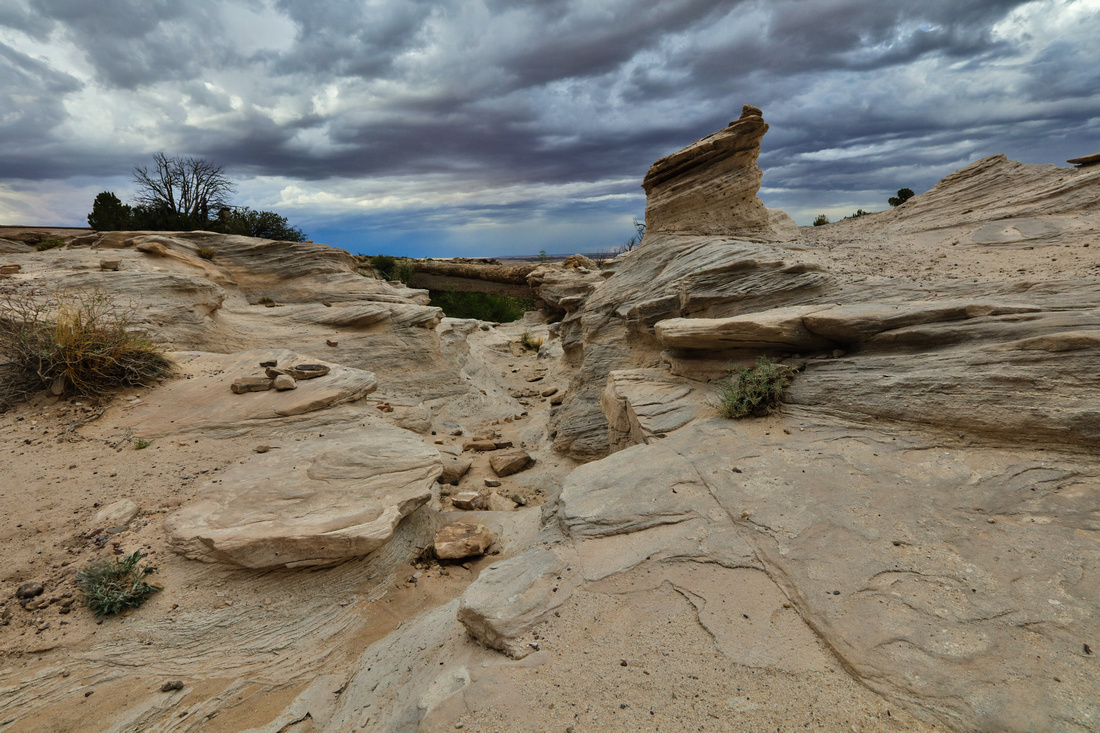 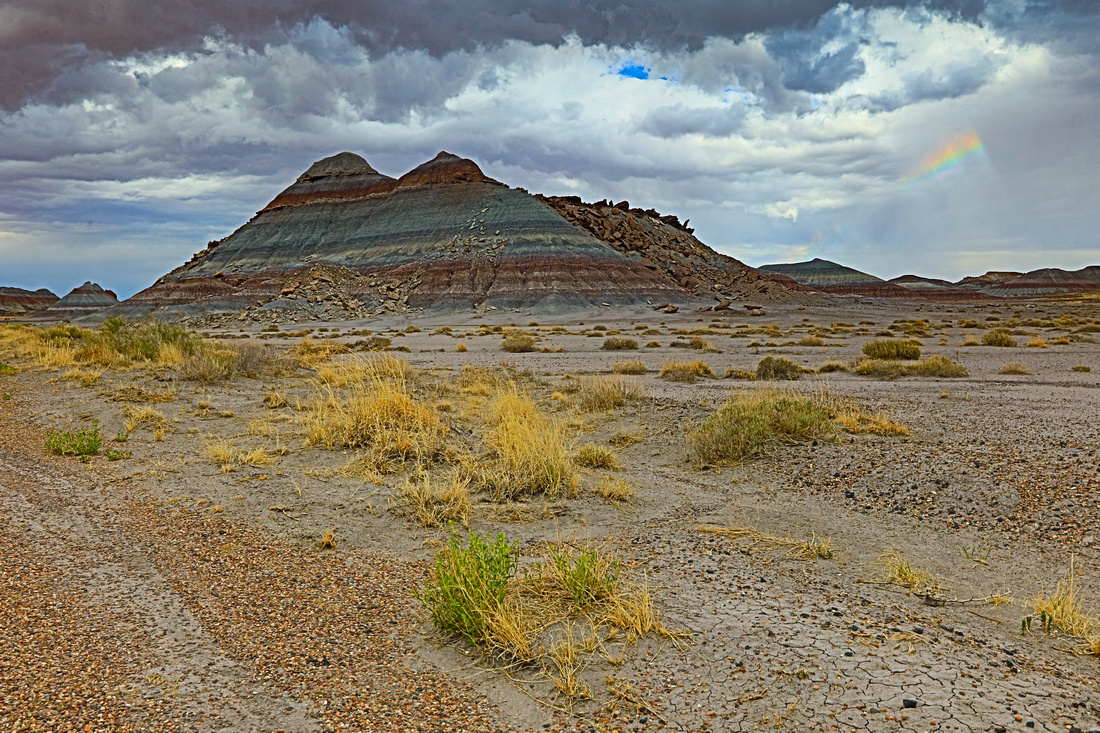 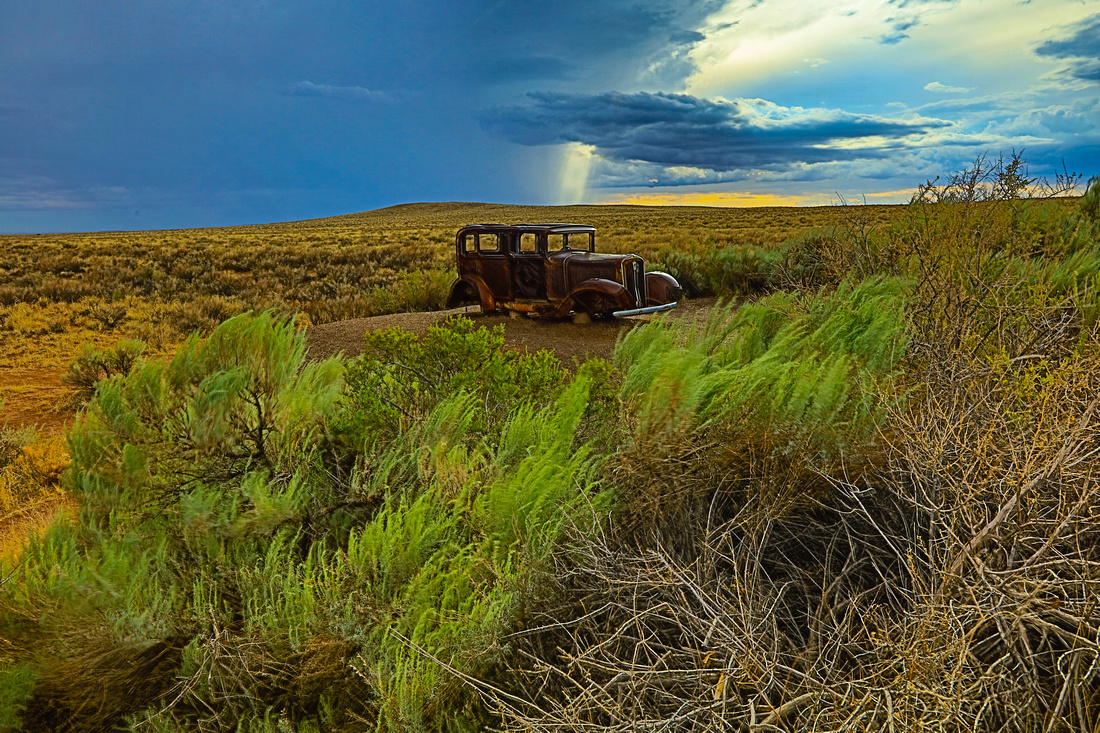 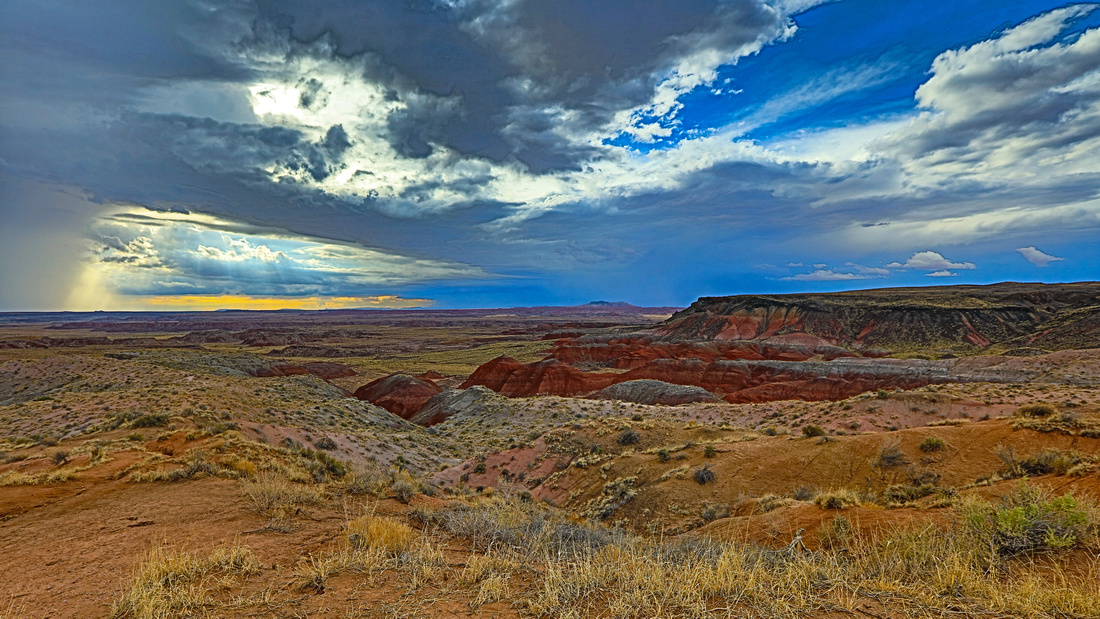 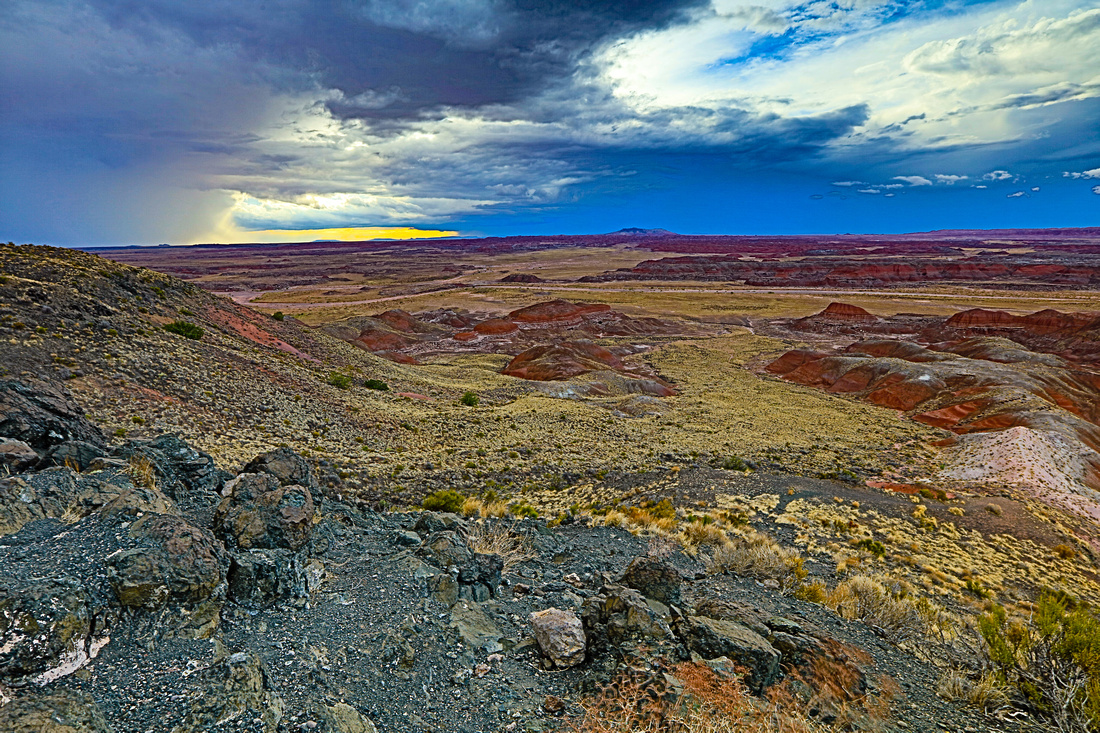 Only 10 percent of the land area where petrified wood is found is protected by the national park, the rest is privately owned. Some people mine for petrified wood to sell as souvenirs or for art work. The museum we visited had some incredible objects.

Originally, we had plan to visit Santa Fe and surrounding area but as we were getting short of time we decided to save it for next time. So the next day was almost endless straight stretches of nothing! No town, no gas station, no rest stop, at first it was pretty but after a hundred miles or so it became a familiar view.

The next stop was Carlsbad, NM. Our original plan was to stay 2 nights and enjoy a full day at the Carlsbad Cavern with a bat viewing in the evening.  Unfortunately, Carlsbad has become an oil boom town and in the last few years seen some serious price increases. A Motel 6 was $153 a night, so we decided to stay for only one night and skip the bat viewing.

Carlsbad Caverns was another fascinating stop. We only did the Big Room – 1.25 miles of spectacular underground cave with a pleasant temperature of 56F compared to the triple digits outside. Next time, we’ll do the other caves and watch the bats come out at sunset. There are 17 varieties and about 400,000 of them. 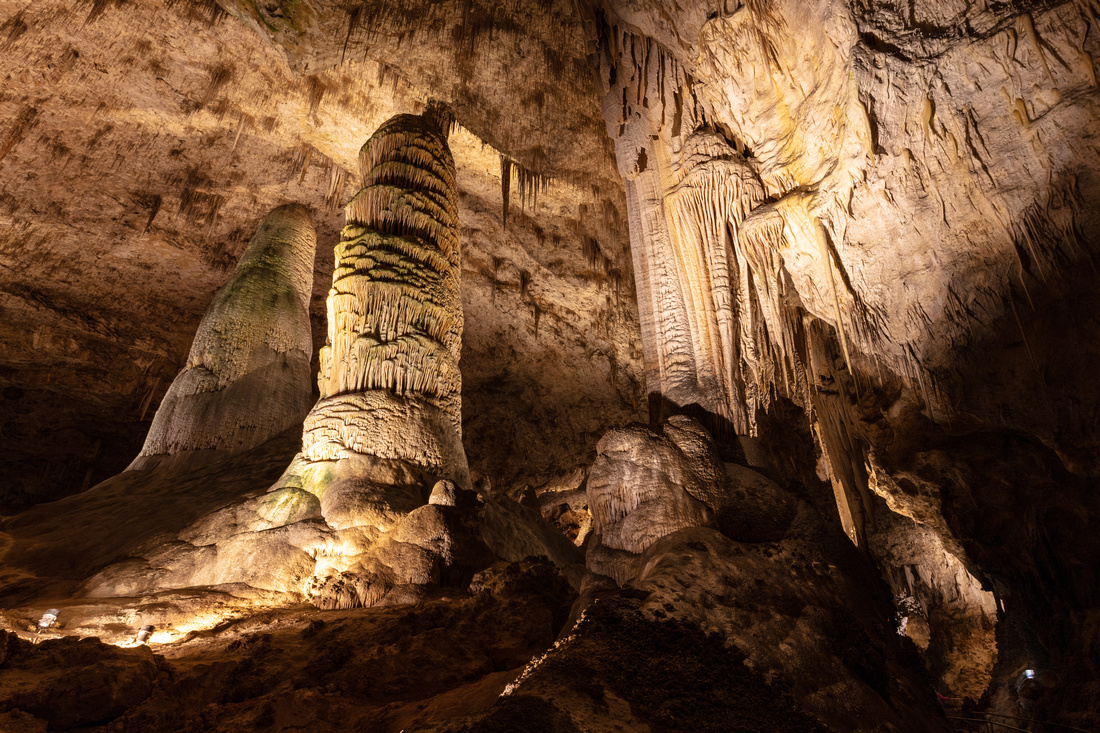 SentinelsGiants protecting the entry to the big hall 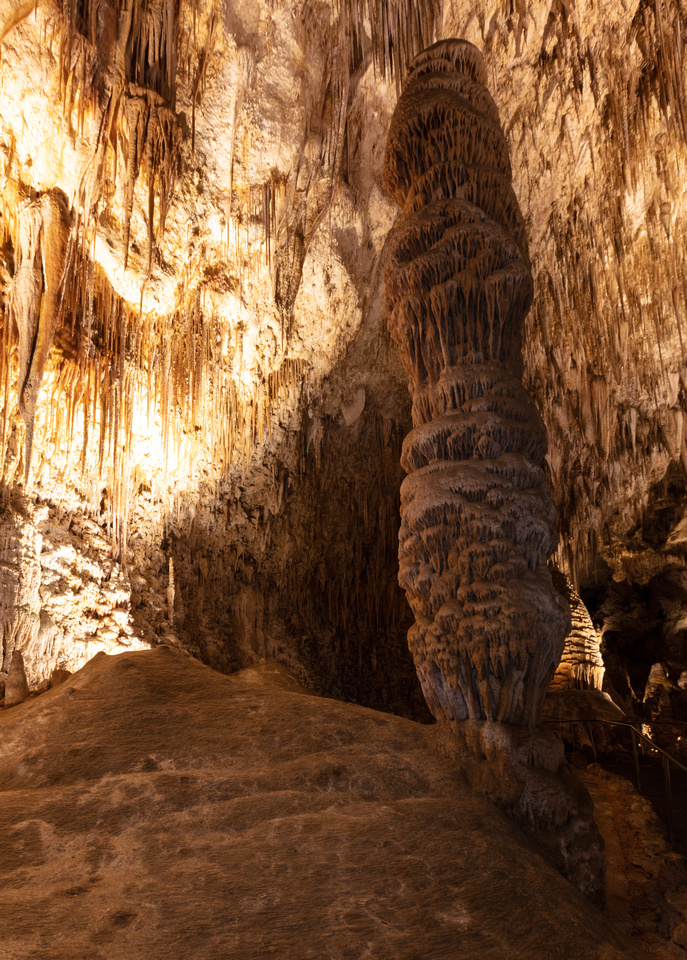 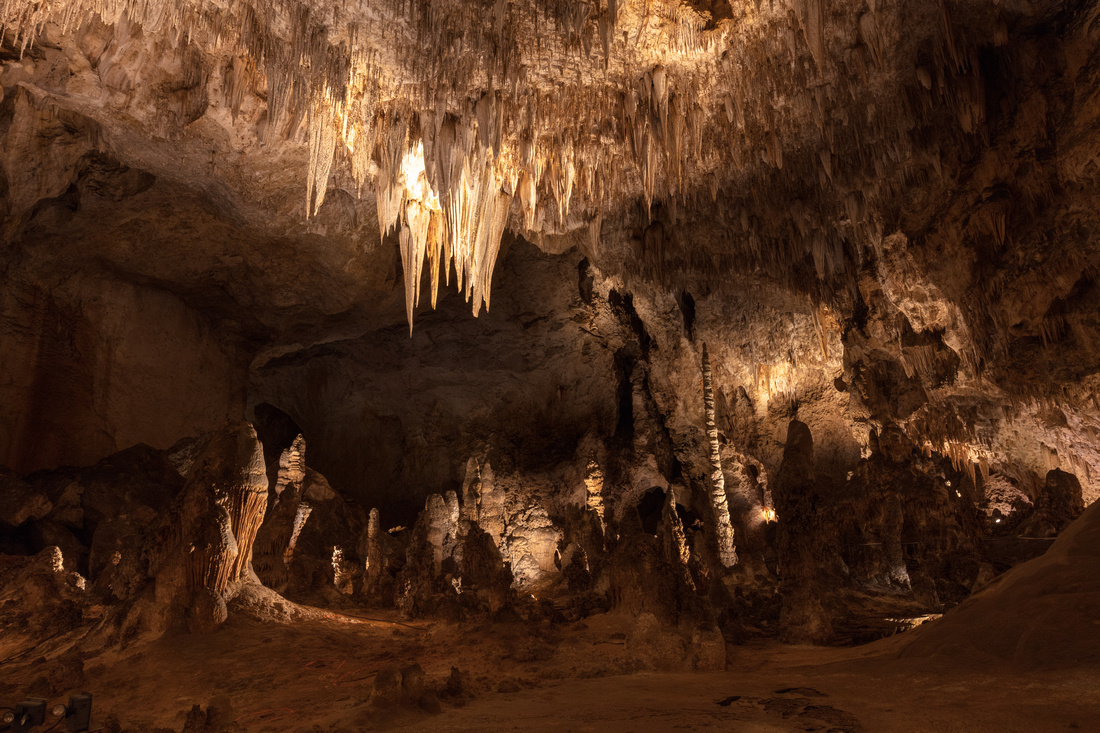 In the Hall of the Mountain King 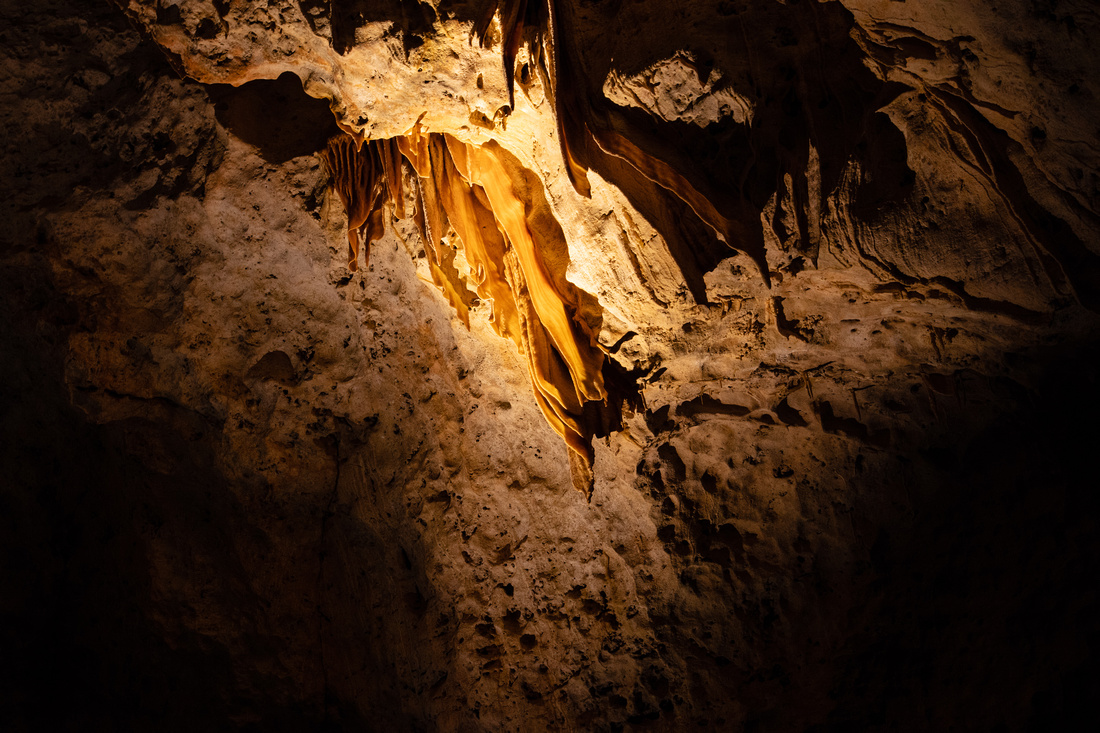 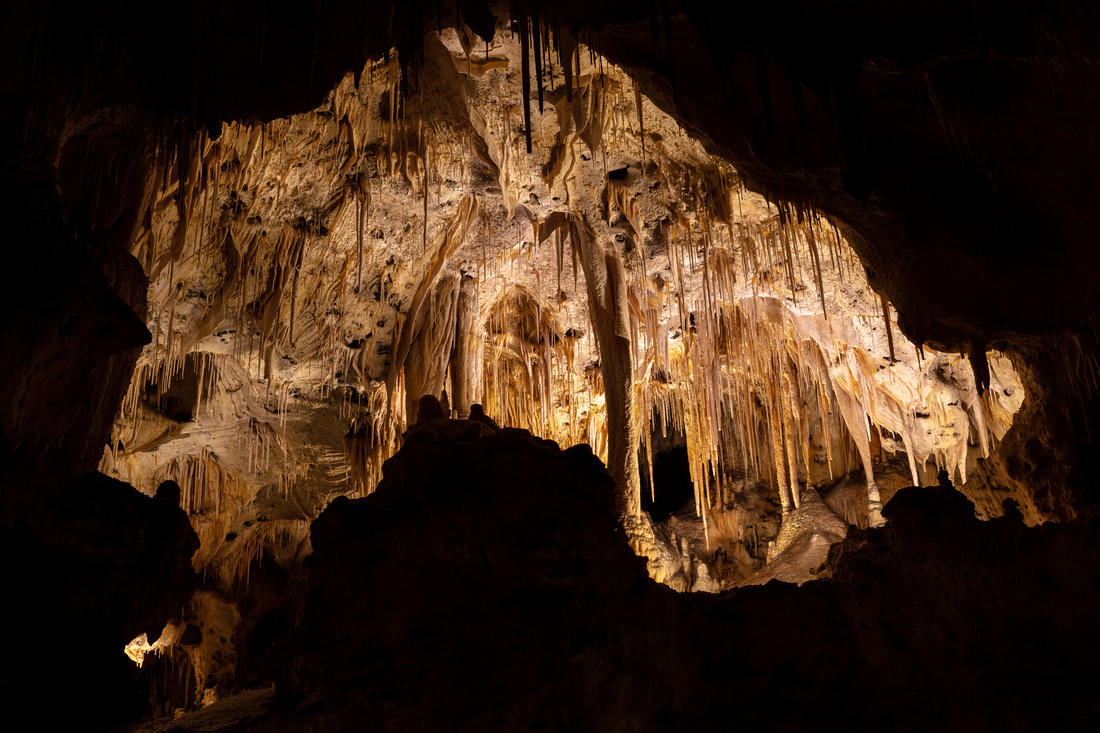 Torture ChamberDon't mess with the king 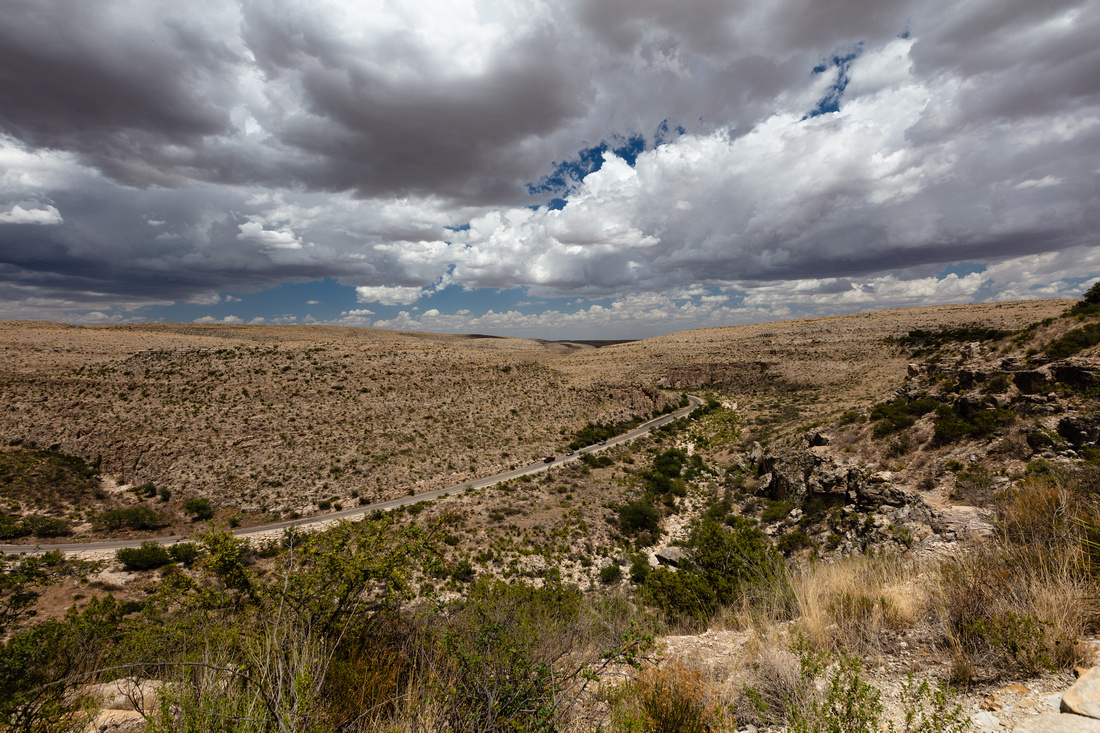 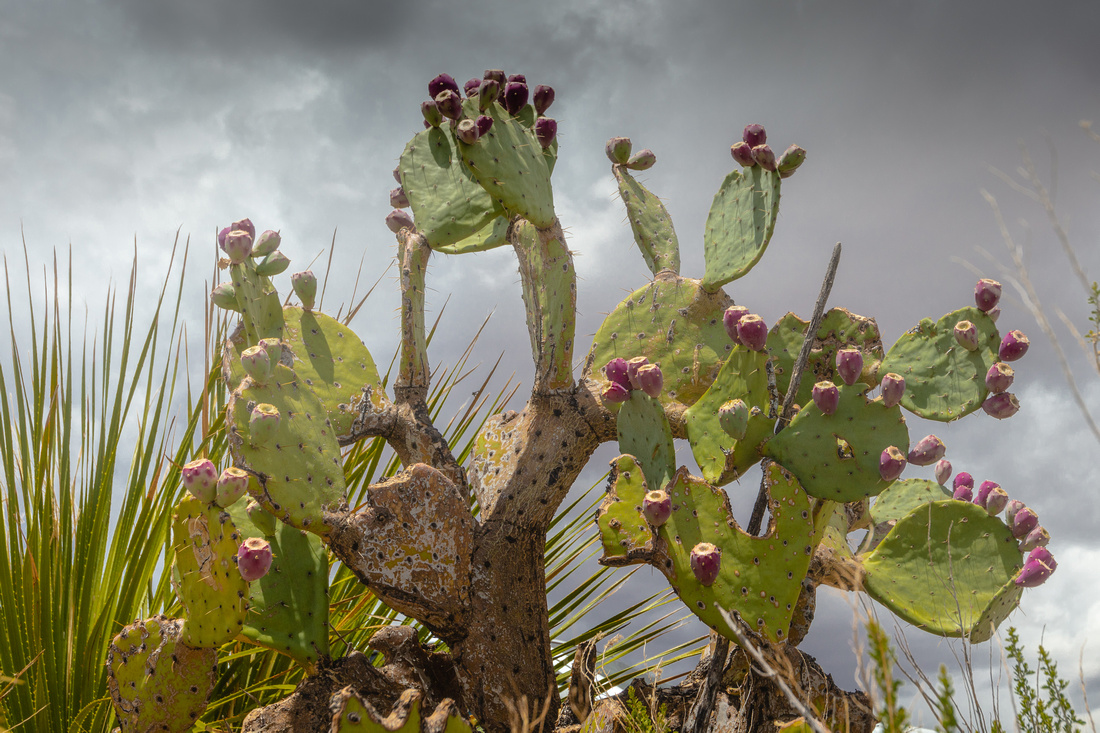 Cactus in the Skywith diamonds

After all that ancient and interesting geology discovery, we hit the long stretch home to Houston through west Texas.  Another long stretch of nothing – or so we thought. The road was incredibly busy with pickup trucks and 18 wheelers. The oil country continued, the fields were littered with pumpjacks and holding tanks. Once we hit I10 the energy production continued but instead of pumpjacks it was now wind turbines.  Texas was/is the biggest producer of wind power in the US. Still this energy rich state is a “No country for Teslas” we almost ran out of gas and rolled into the gas station in Ozona. The last 50 miles or so we drove with the AC turned off and a lower speed to conserve fuel, thank goodness it was in the evening and temperatures were no longer over 100. The lesson learned when driving in west Texas never turn down an opportunity to fill up the tank. But, we finally made it to Houston after 3,351 miles!!!

For now, we are enjoying family, dealing with address changes and trying to stay cool.

* Mouse over image to read captions.

Brian Wagner(non-registered)
Thanks for the photos and especially for the petrified wood recipe. I have buried and flooded the tree and have set my oven timer for 280 million years. Its so hard to not look but I'll be patient.
Becky and jody(non-registered)
Wonderful to follow along with your travel adventures. Loving the great photos too. Thanks for sharing. B
Bill Hanson(non-registered)
Loving the trip with you..
Gloria Lee(non-registered)
Some stunning pictures and enjoy the commentary too. I well remember the long stretches of road as I drove from Dallas to Oregon in 79 with a 6 month old! Keep me on your blog! We are hot here too! :)
adele'(non-registered)
Beyond beautiful, I am going to see our country thru your eyes! Thank you, miss you, enjoy!
No comments posted.
Loading...
Recent Posts
Sun sets on our travels! Sayonara Japan Along the Seto Inland Sea, Japan Osaka, Japan A week in Taiwan Vietnam - Hanoi & Tam Coc Thailand, the land of smiles Midsummer in Sweden Buenos Bergen, Norway Baustelle & Stau - Road Trip to Germany
Keywords
Argentina Sweden Osaka Buenos Aires Chile Asuka Danjiri Fushimi-Inari Kendo Kofun
Archive
January February March April May June July August September October November December
© Terralinda
Powered by ZENFOLIO User Agreement
Cancel
Continue