After a nice day visiting Stockholm and friends, we checked in our hotel near Arlanda Airport. There is a first time for everything, we got to our room to find somebody already there. Luckily, he was fully dressed. But imagine the interaction in any other situation…we’ll let your imagination run with this one…..

Stepping out in ItalyThe view from Premeno of Lago Maggiore

We took the early flight to Milano Malpensa, and then the bus to Lake Maggiore. Three hours later, we are finally sitting on the terrace of our hotel in Premeno, Italy. As of 2004, the population was 776. It felt like it hasn’t changed much since then. We enjoyed the slow pace as we were tired from the travels and enjoyed having some downtime. 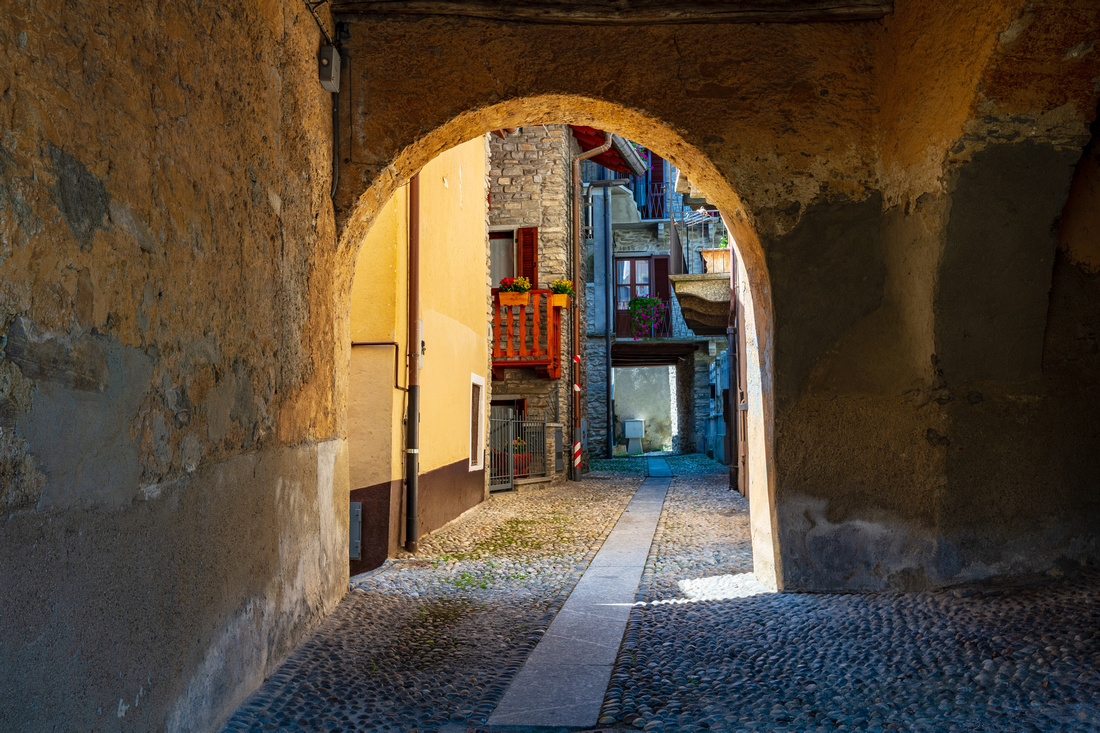 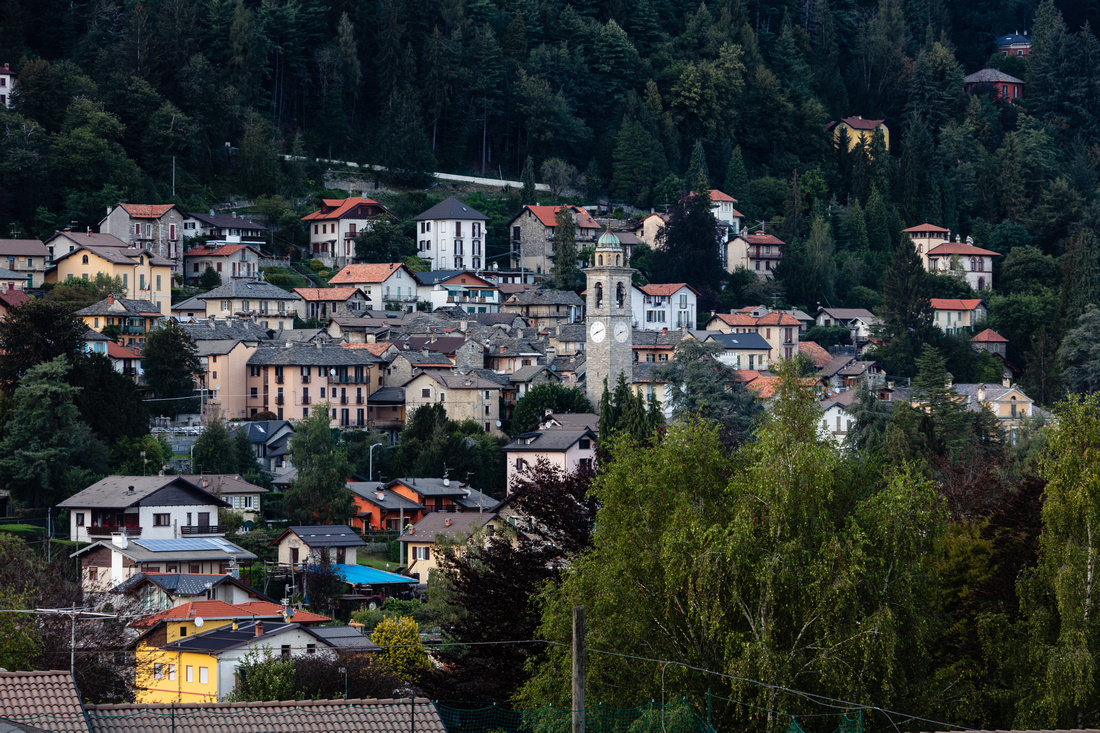 Around Lake Maggiore, the easiest way to get around is by car, however we decided to make do with train and busses. We learned that buses are reliable but never on time. Sure enough, we were biting our finger nails and getting nervous to make our connections, but everything went smoothly, and we met new friends along the way. After, 2 bus rides, 2 train rides and a taxi ride, we arrived in La Spezia. 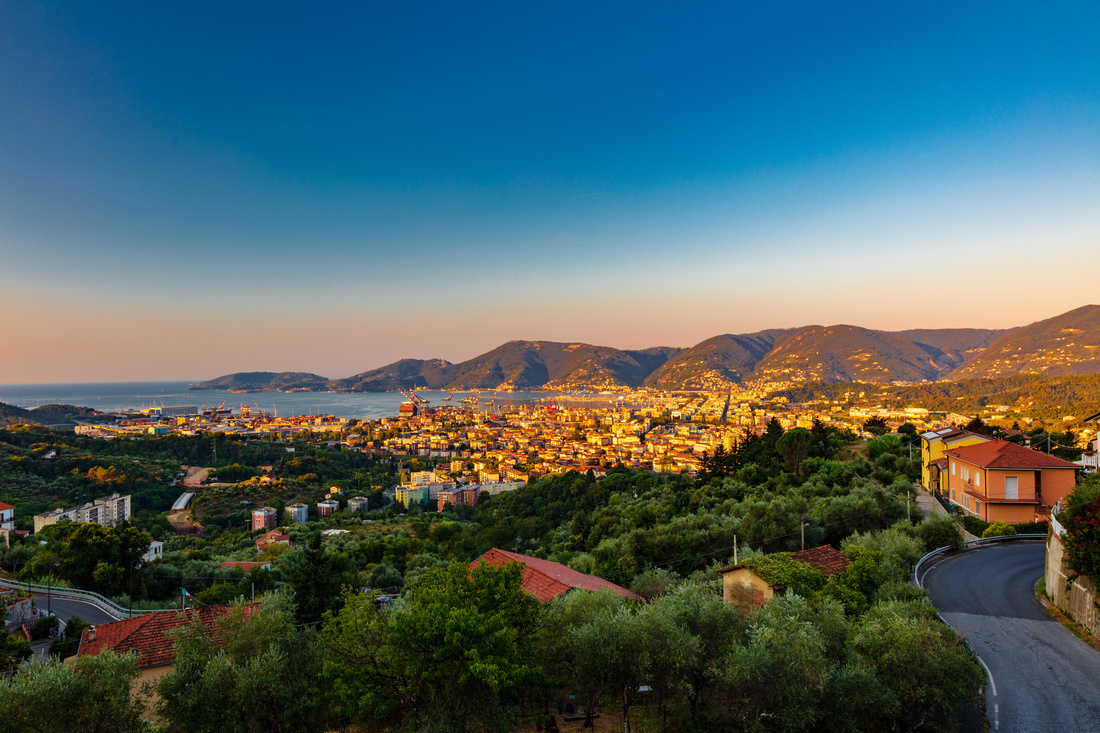 We spent the next few days exploring the Ligurian coast with old college friends meeting up from three parts of the world.

Day one: Porto Venere – small fishing town with beautiful facades along the waterfront, an old church that gives a nice view from above and an old castle with also a 360 view and several fruit trees: figs (they were delicious), lemon, olives, and grapes. We really enjoyed this port town. 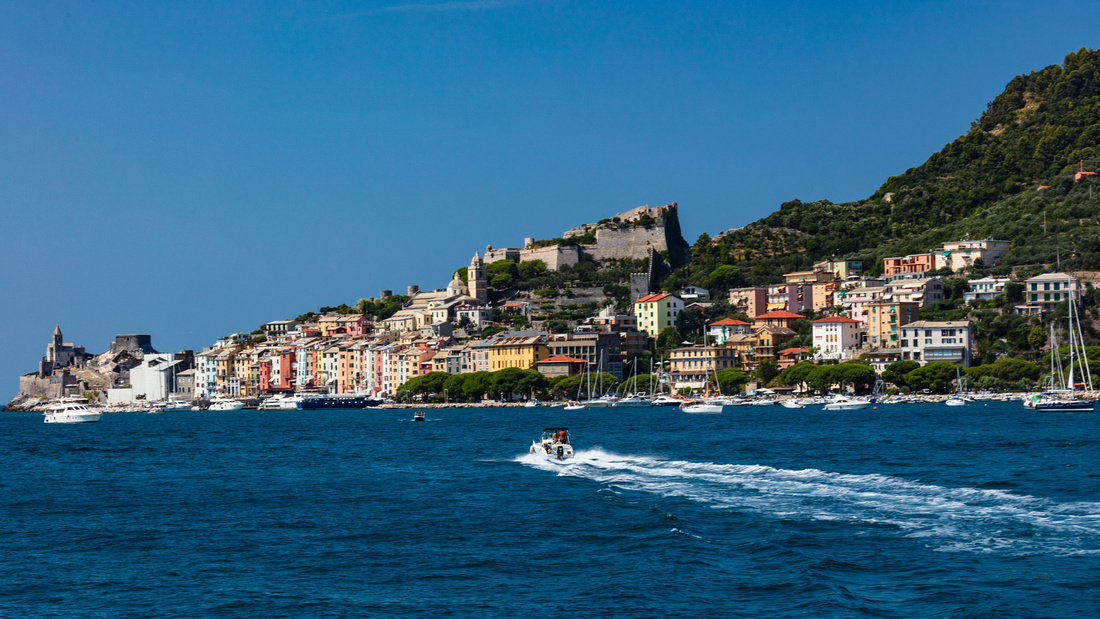 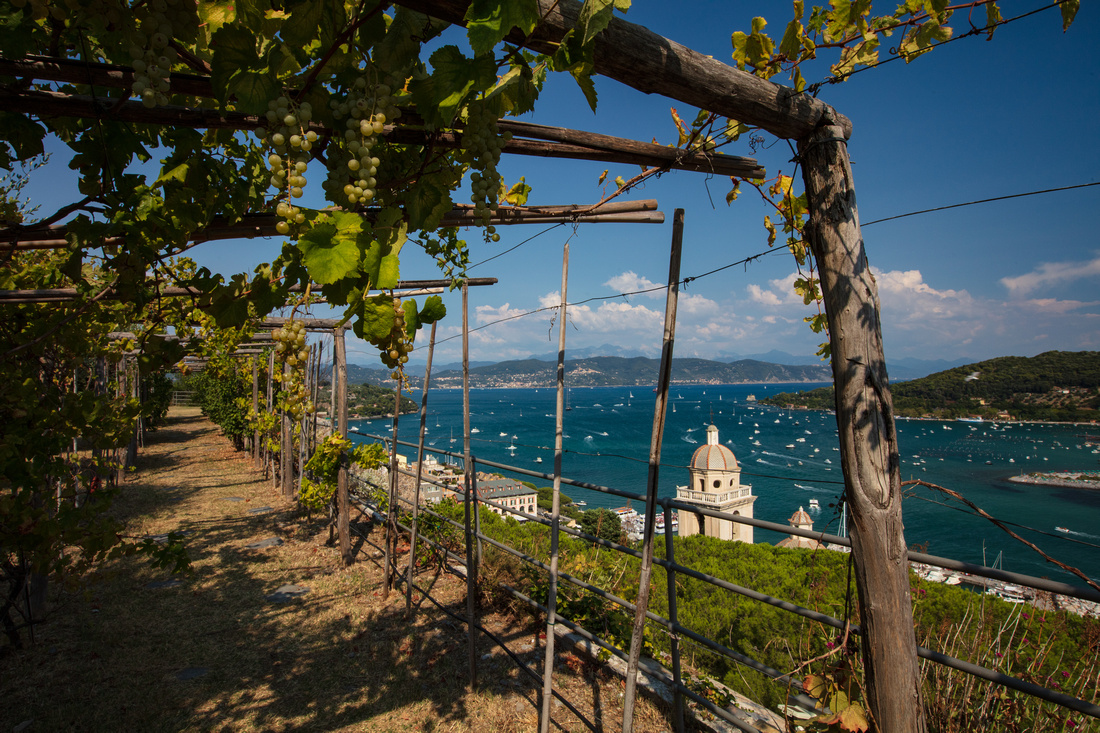 View from the Caste in Porto Venere 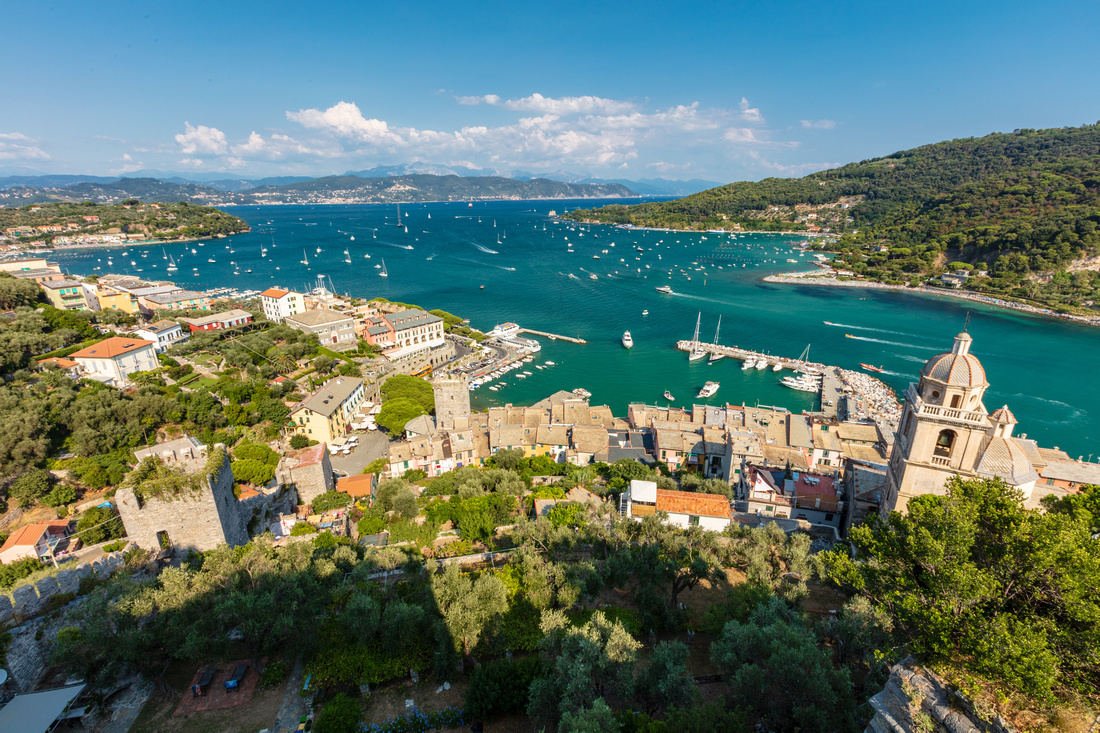 Another Caste view from Porto Venere 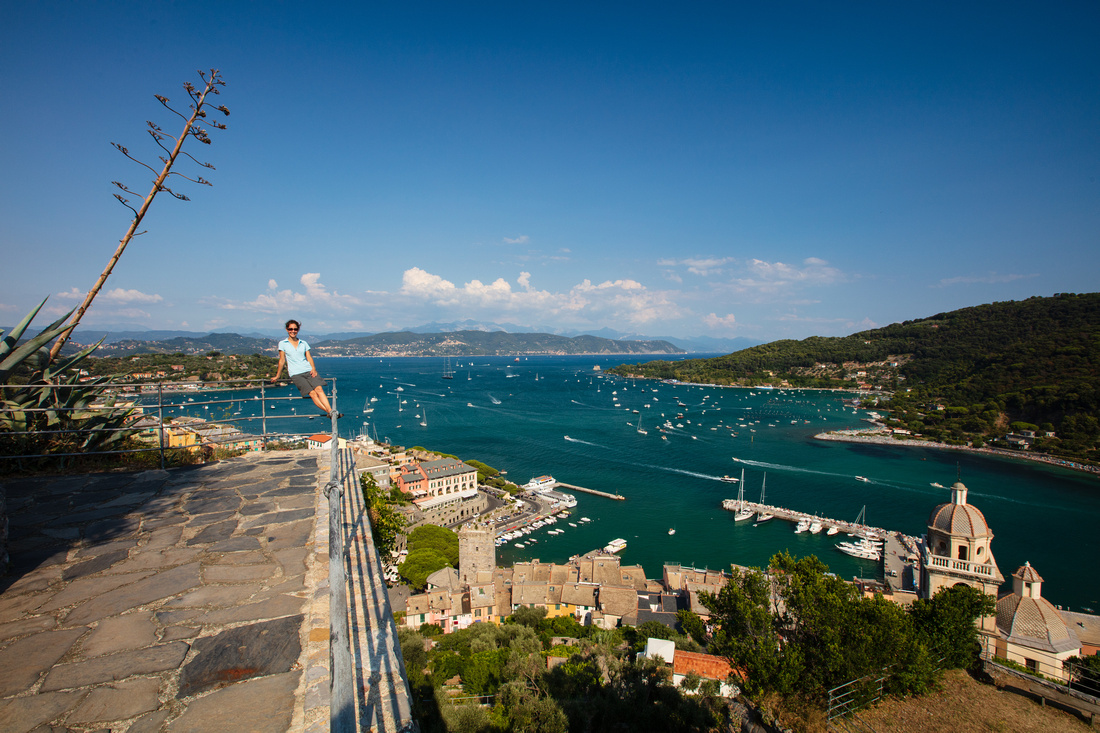 The ruler of the Castle in Porto Venere 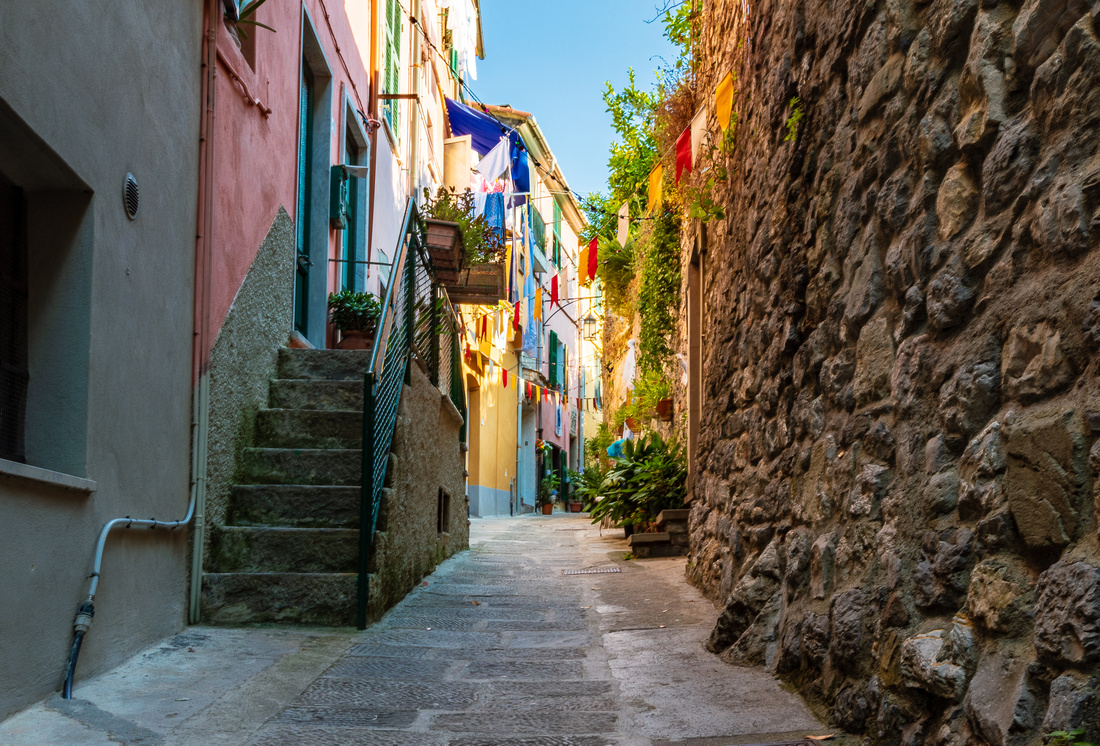 Wandering the streets of Porto Venere

Day two: Cinque Terres – took the ferry and hopped from one village to the next: Riomaggiore, Manarola, Vernazza and Monterosso. We didn’t make it to Corniglia, it was only accessible by taking hundreds of steps to reach and we would have missed the last ferry. You always must have one reason to go back to a place and so we’ll be back to see Corniglia for sure. Since 1926, the Cinque Terre towns have been part of the province of La Spezia. This territory was long isolated, and the five villages were only reached by the outside world about 100 years ago when the railway line was built. Today, Cinque Terre is a National Park and a UNESCO World Heritage Site. It was overall very touristy but still charming. 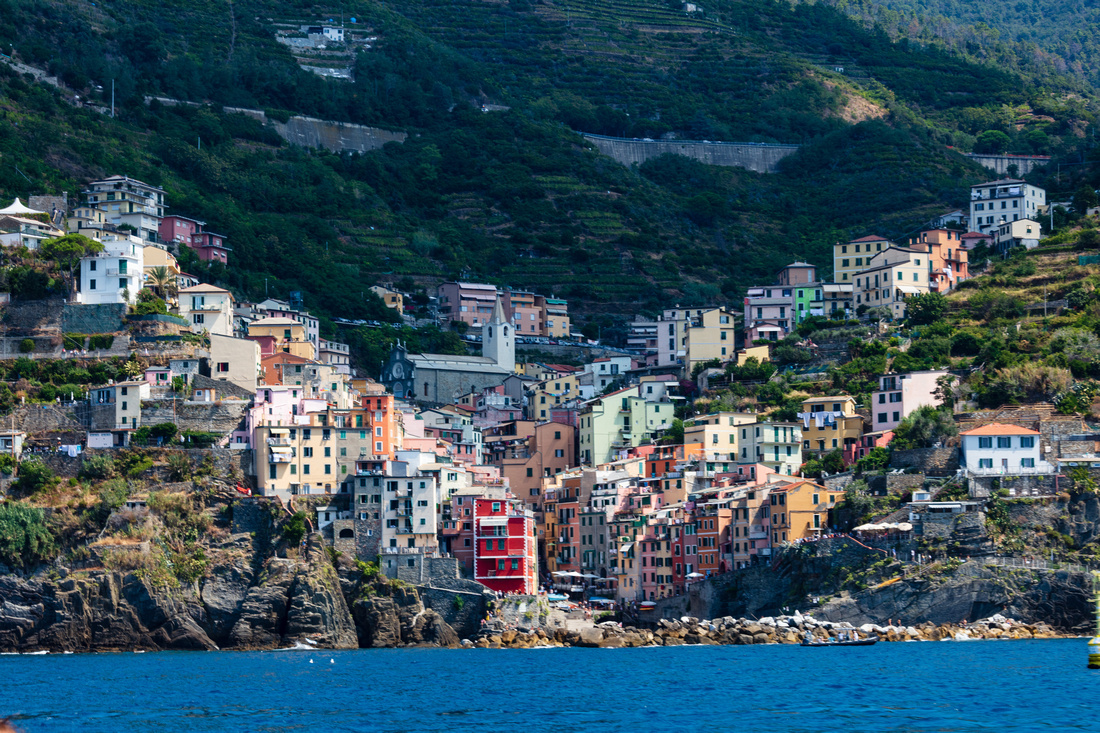 Rio Maggiore seen from the ferry 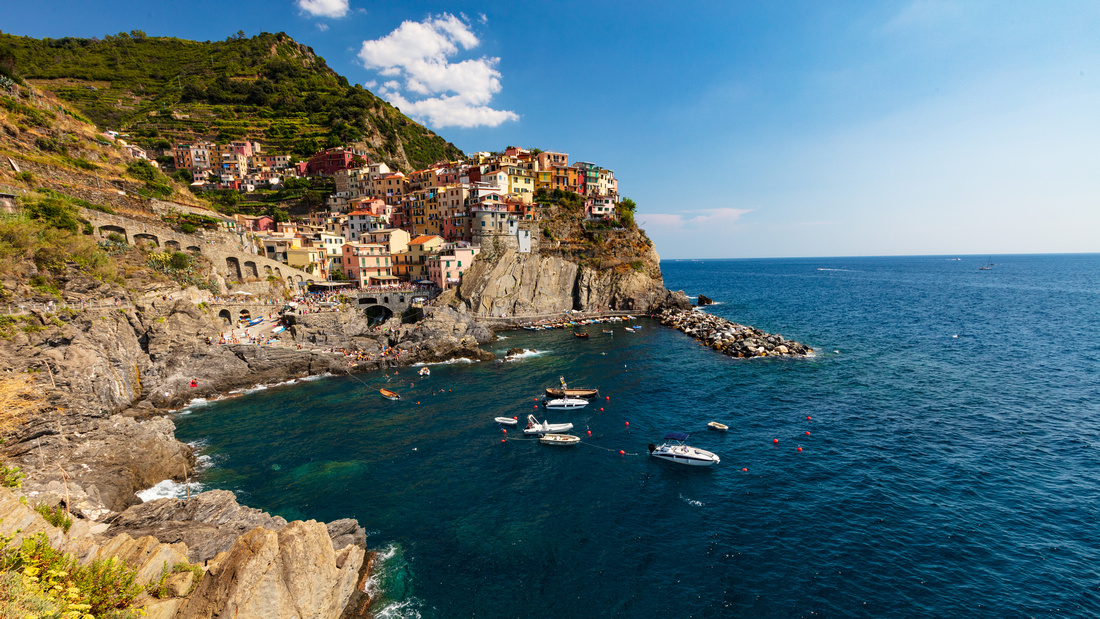 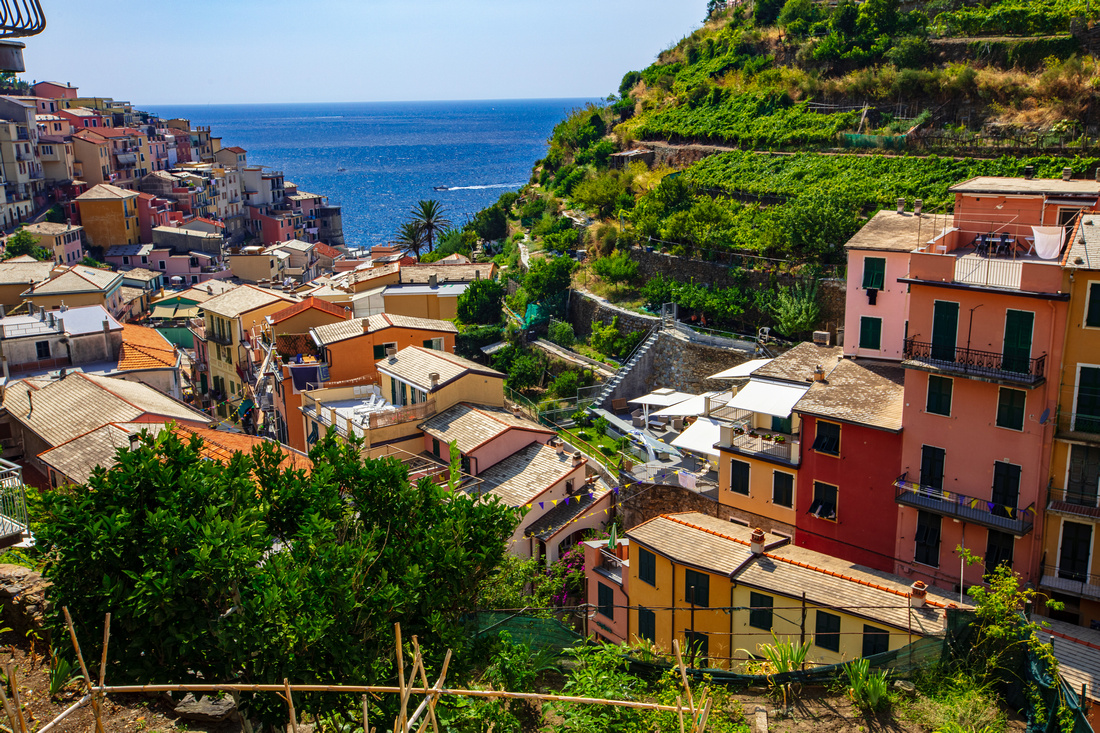 Manarola from the Church square 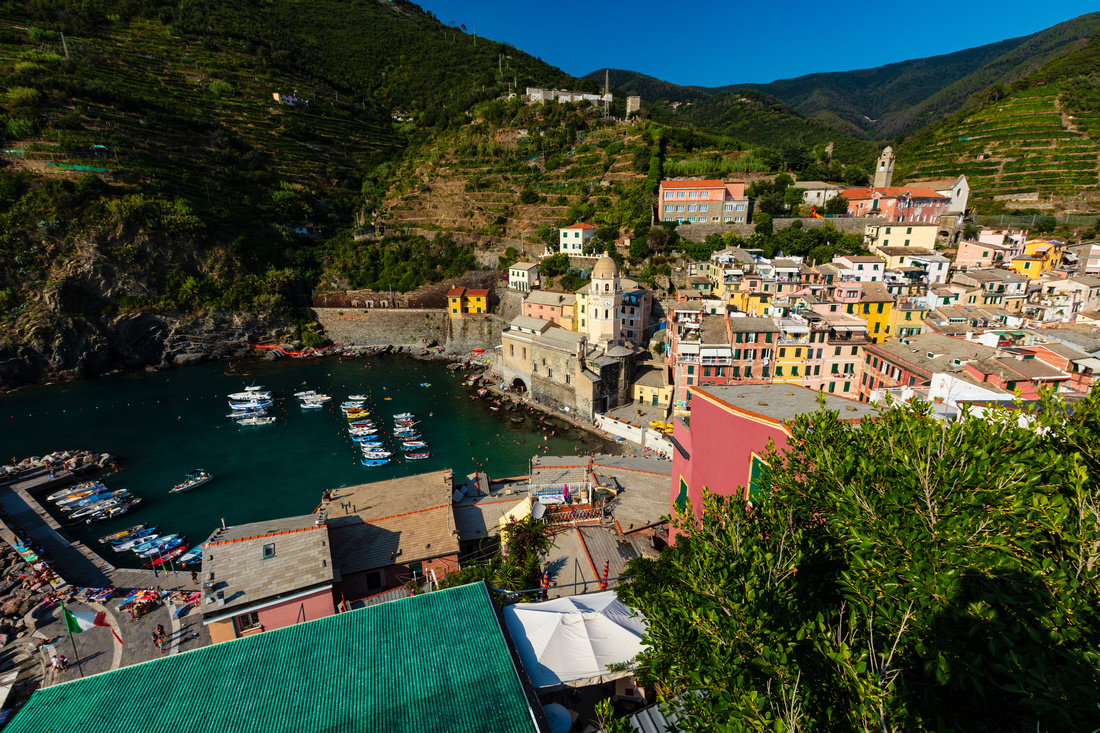 View from the Castle in Vernazza 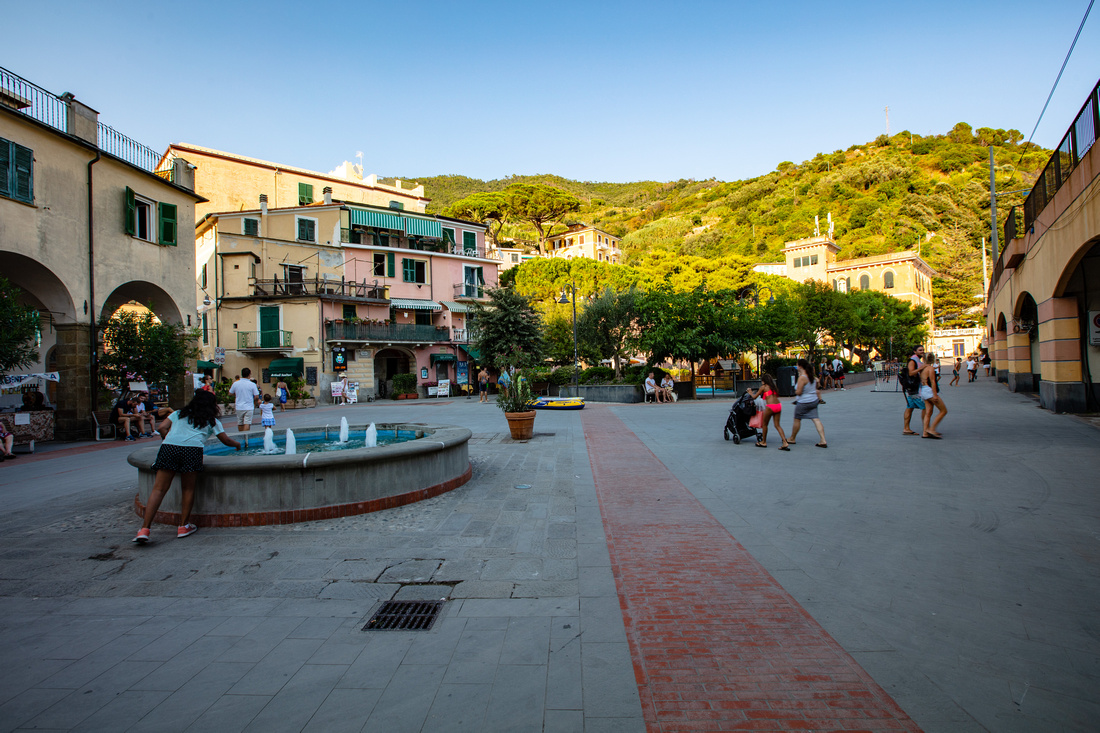 Day three: Lerici – another harbor town just 8 km from La Spezia. Stunning view to see hundreds of fishing and sailing boats lined in the water. We went up the hill to the Lerici Castle which since its first founding in 1152 was used to help control the entrance of the Gulf of La Spezia. 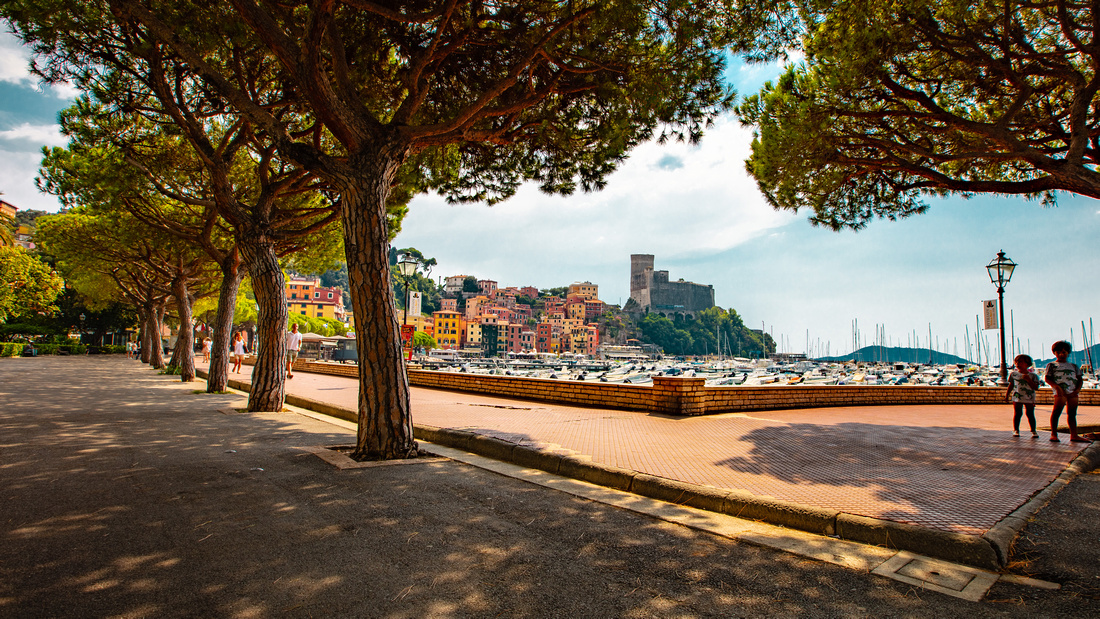 Lerici and the Castle 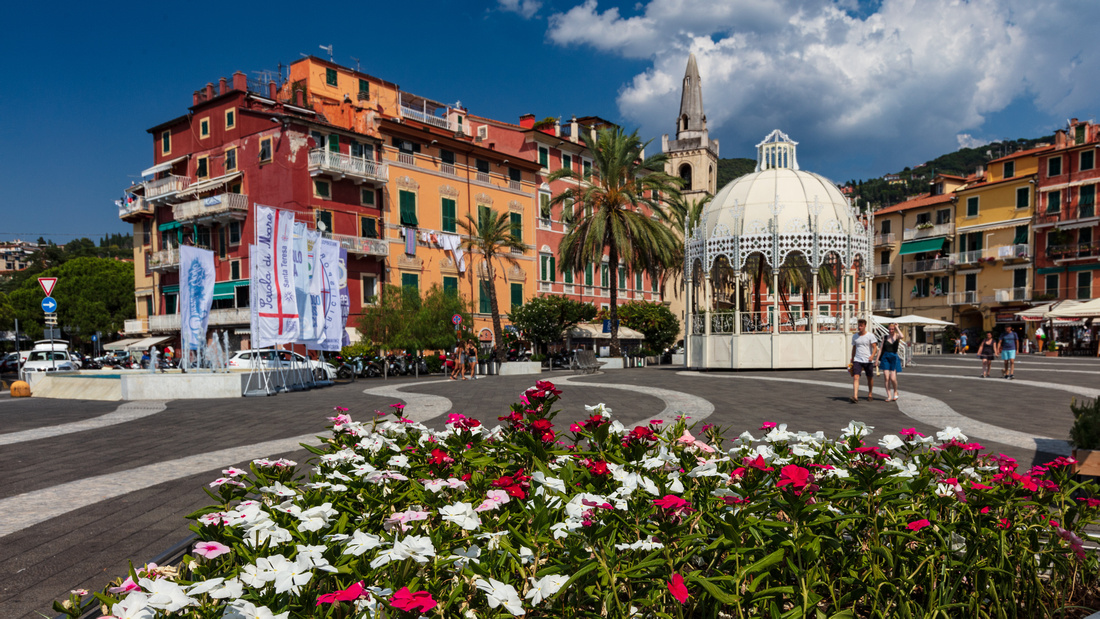 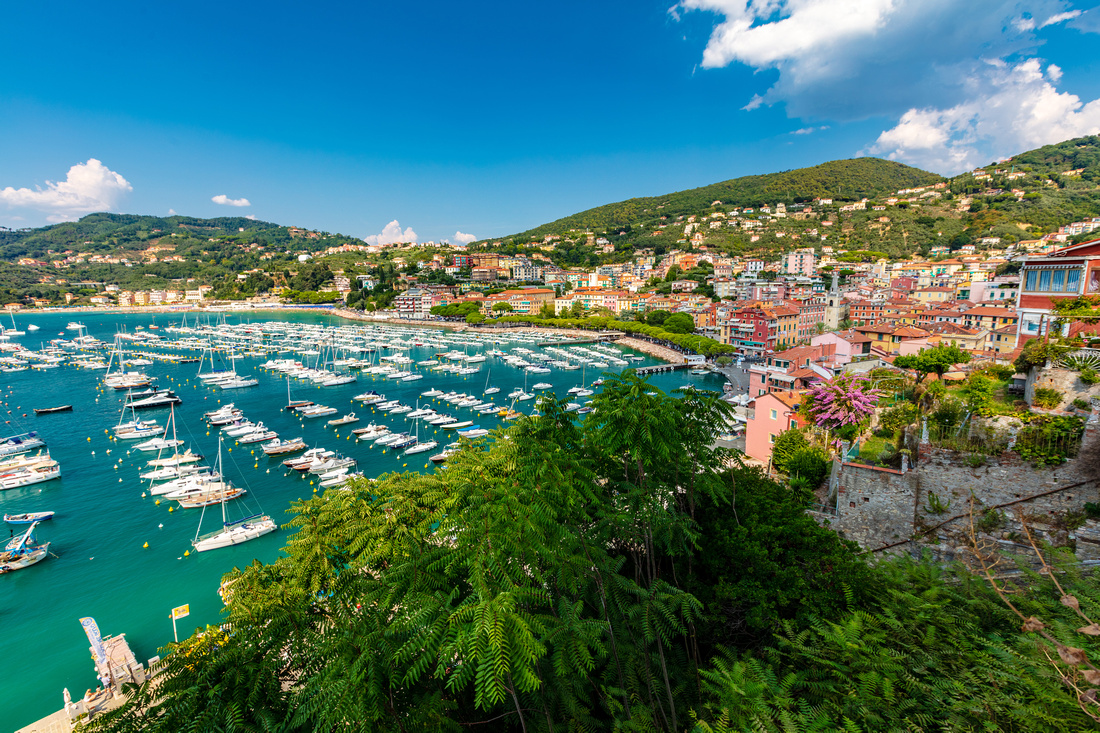 View from the Castle in Lerici 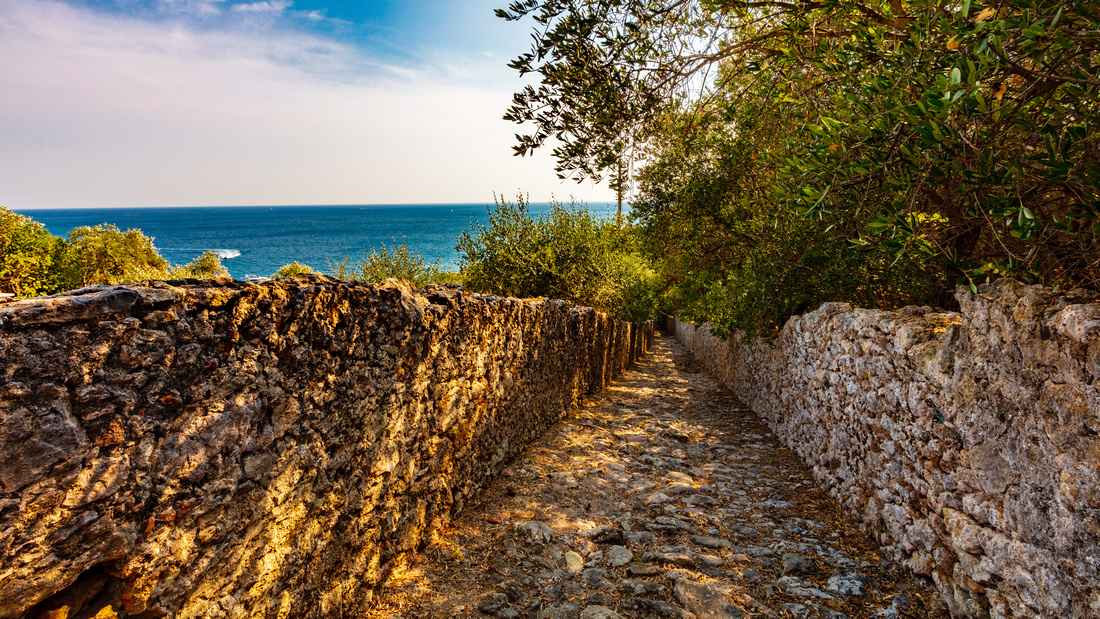 Hidden path among the olive groves in the hills above Lerici 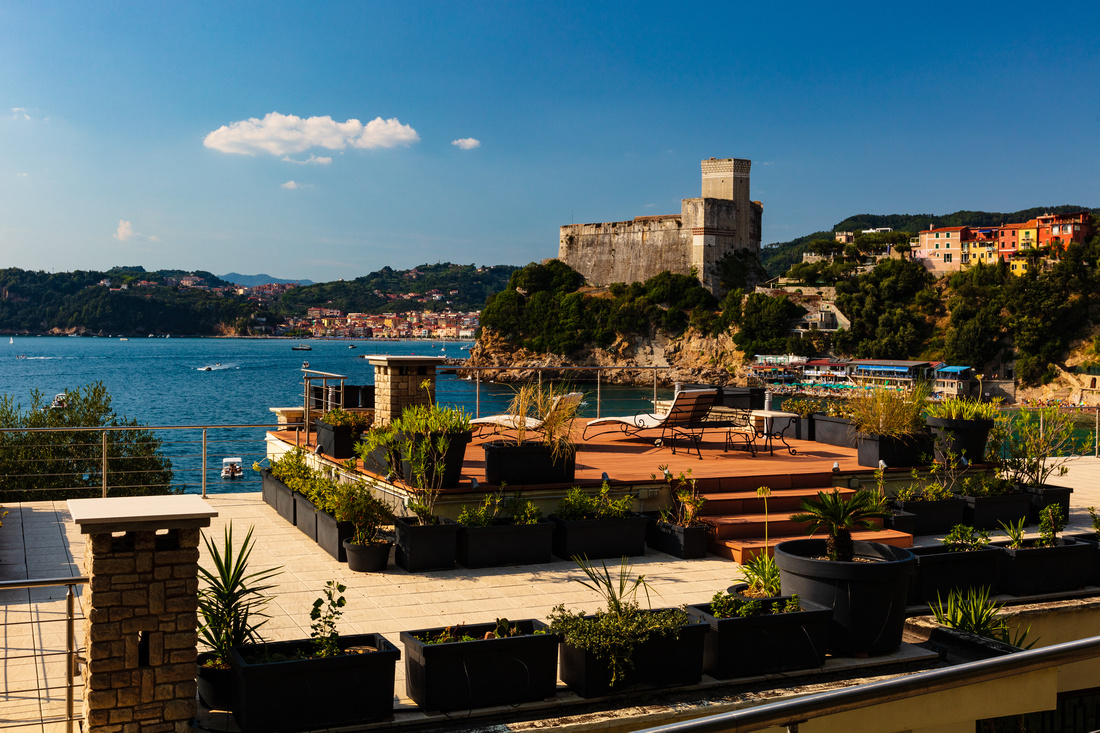 Ready for a drink?Lerici Castle & harbor

Our next stop was 2 days in Villafranca di Verona, meeting with some of Soren’s former business colleagues. Enjoyed an evening visit to Borghetto and Verona. Borghetto is a charming little village with Mincio river running through it and medieval surrounding. We definitely hope to be back and explore the path along the river that goes all the way to the Garda lake. Verona also deserves more time so again we’ll be back. Verona is one of the seven provincial capitals of the region. It is the second largest city municipality in the region and the third largest in northeast Italy. According to Wikipedia, “the city has been declared a World Heritage Site by UNESCO because of its urban structure and architecture”. 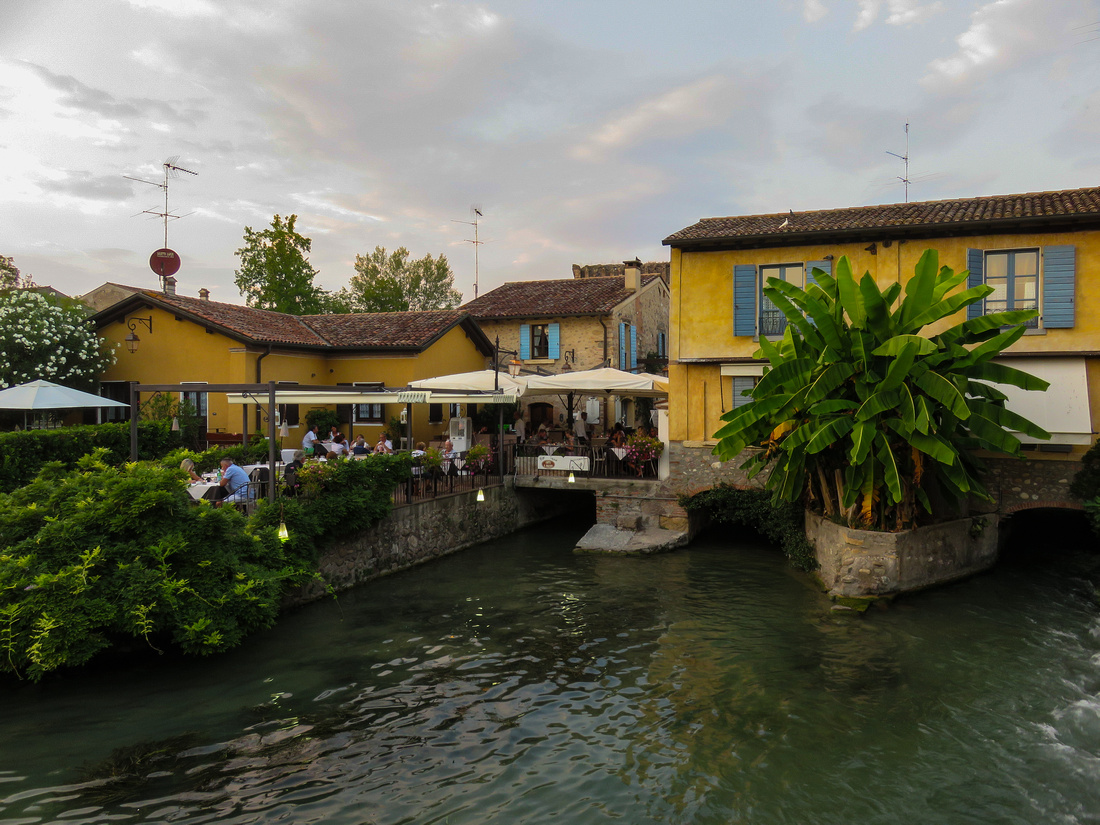 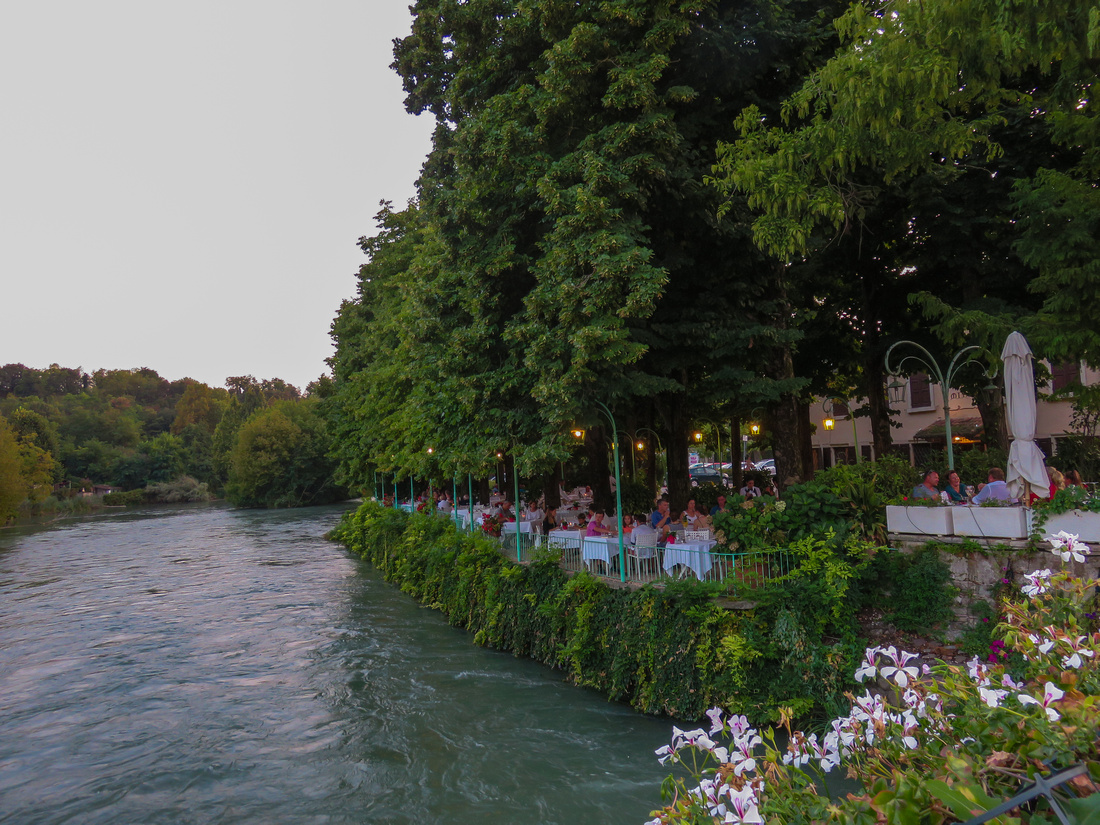 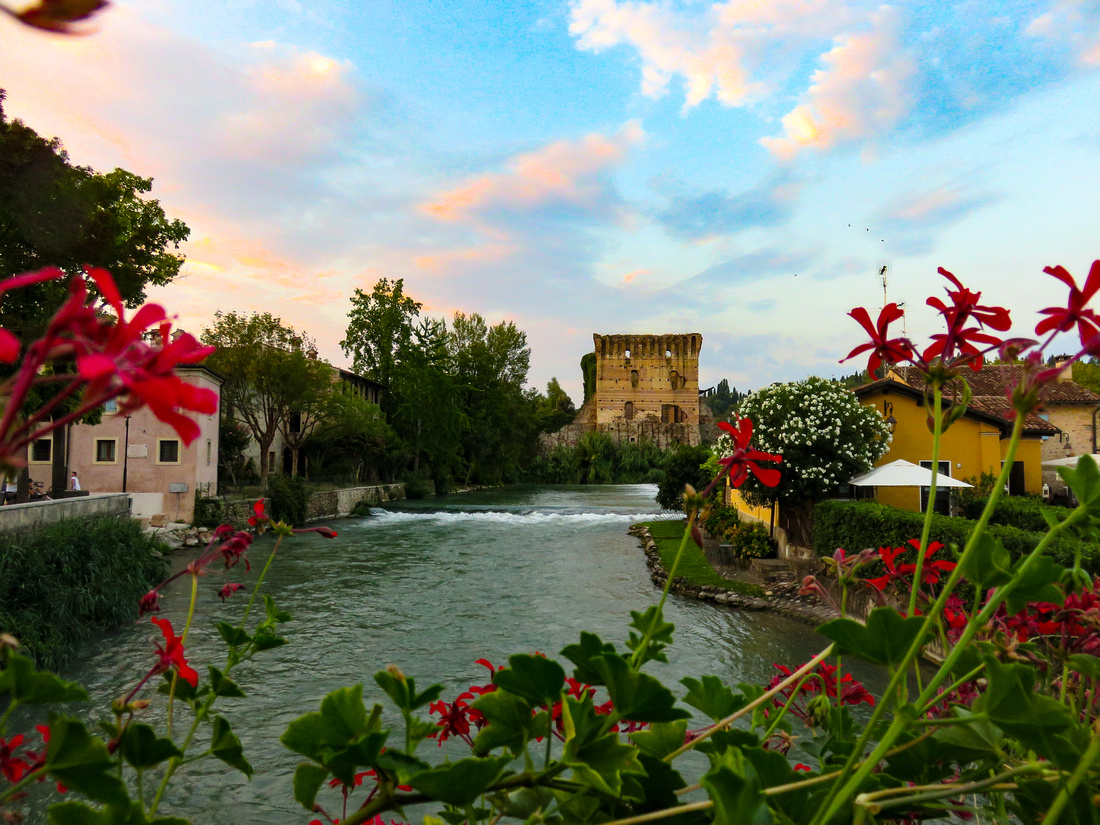 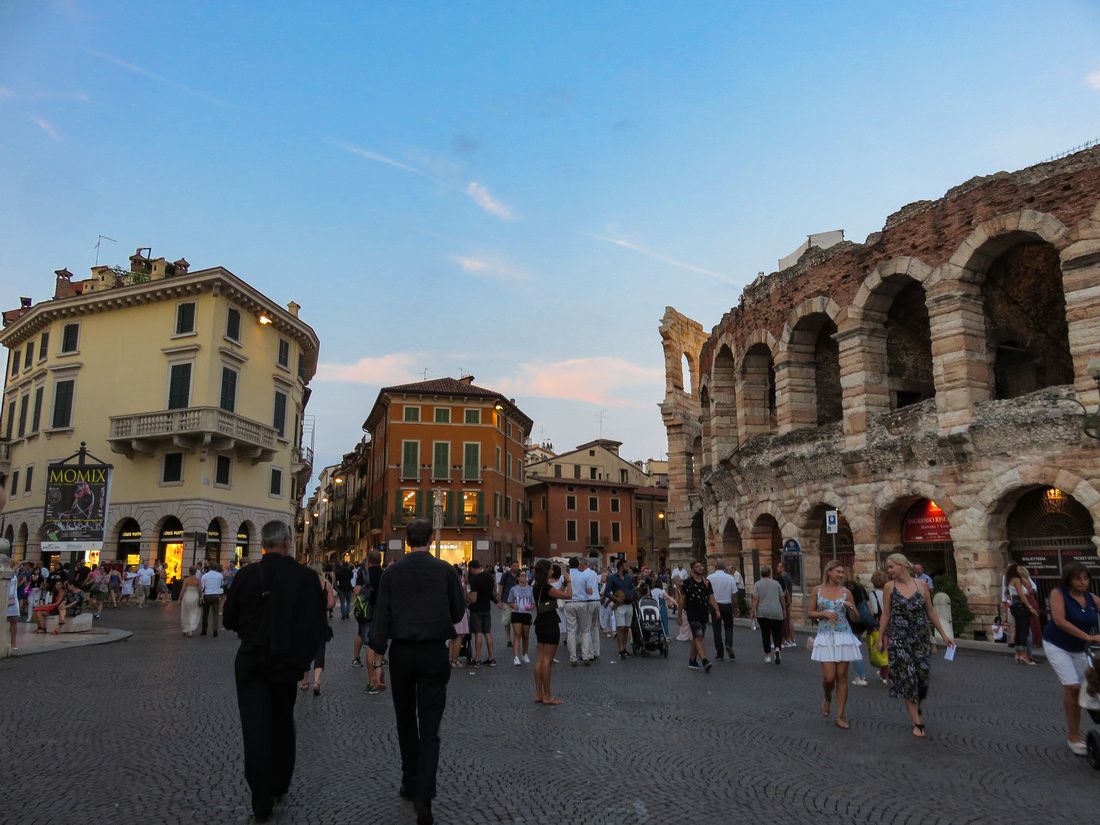 Our last weekend was with our dear friend Maud that we had not seen in too many moons. We met halfway in Torino and explored this beautiful city. We were pleasantly surprised how much there was to see and the beauty of the city (but disappointed how much graffiti there was everywhere). Torino is considered an industrial town but has a rich history with many interesting museums. 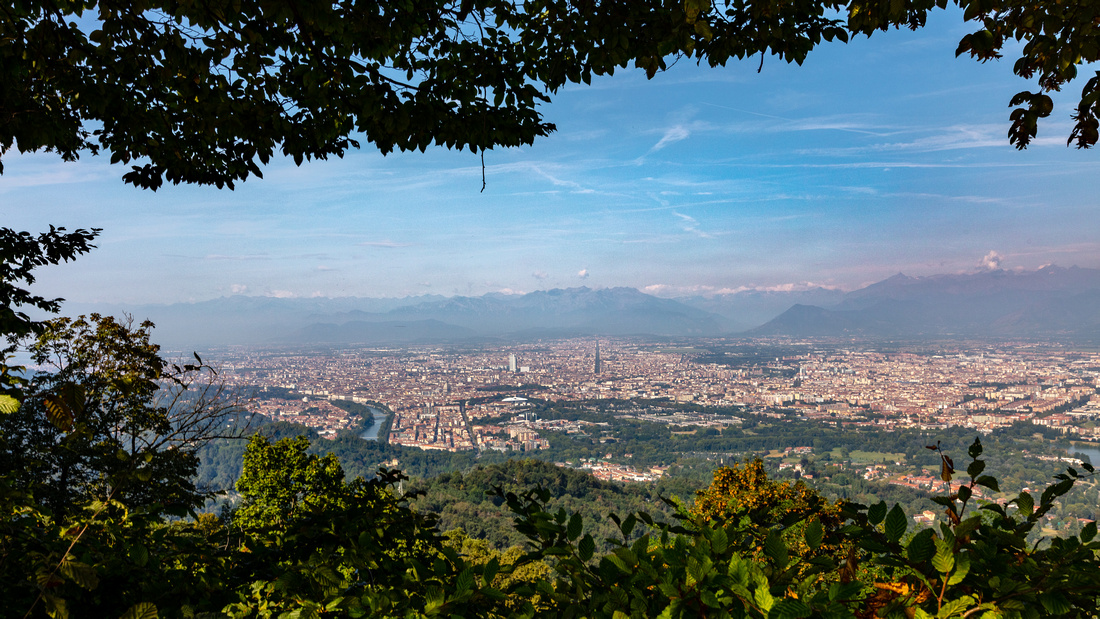 View of Turin from the Superga 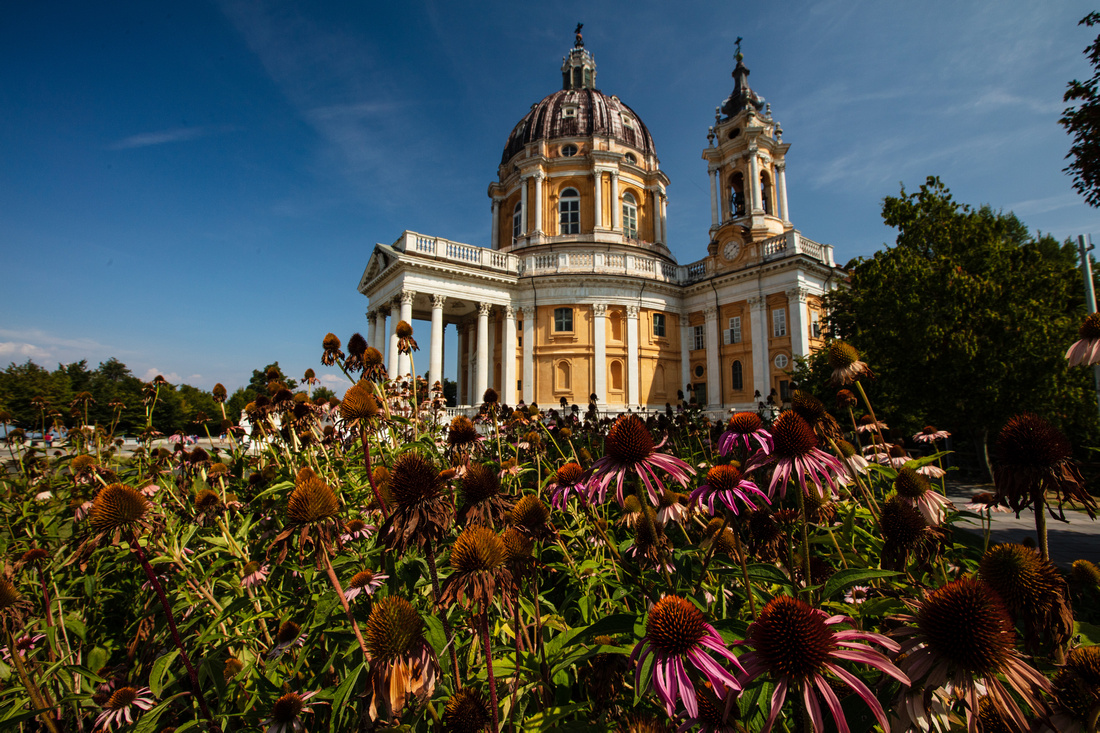 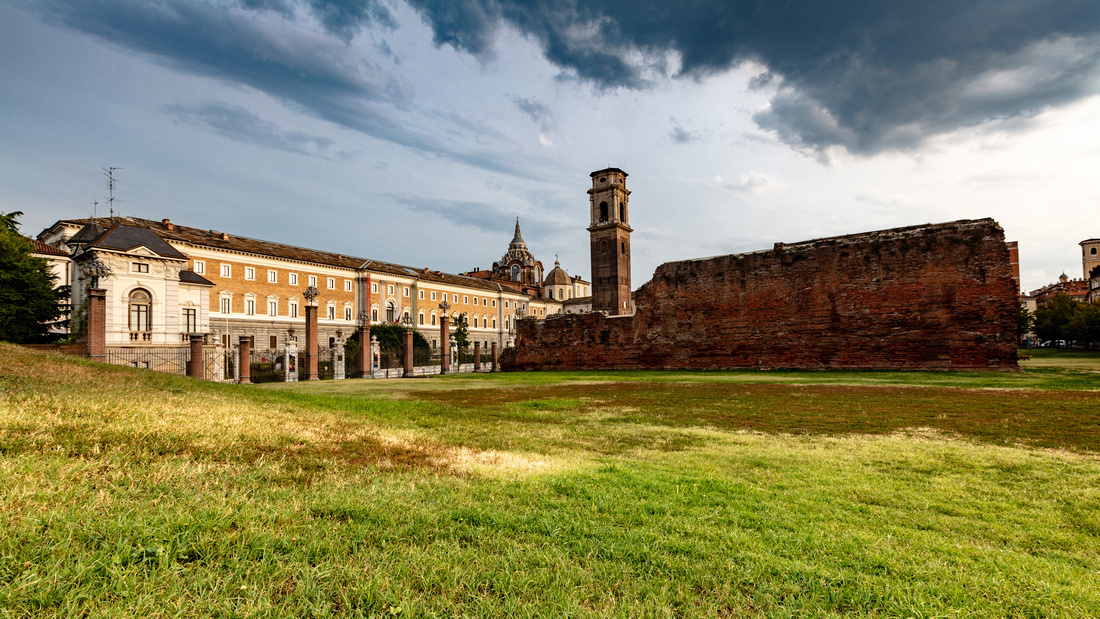 Thanks to the 2006 Winter Olympics, people are paying more attention to Torino. We spend a couple of days wandering the streets and taking in the different architecture styles. One day was fully devoted to Venaria Reale. Think of it as a smaller version of Versailles. The place was built for royalty in the 1600 and used as such until Napoleon. During WWII it was used as military barracks, squatters took over in the 1950s & 60s, then it was left abandoned until efforts to restore it to its original state in the year 2000. They have done a tremendous job with both the palace and the garden. They are still working on it but definitely worth the visit. 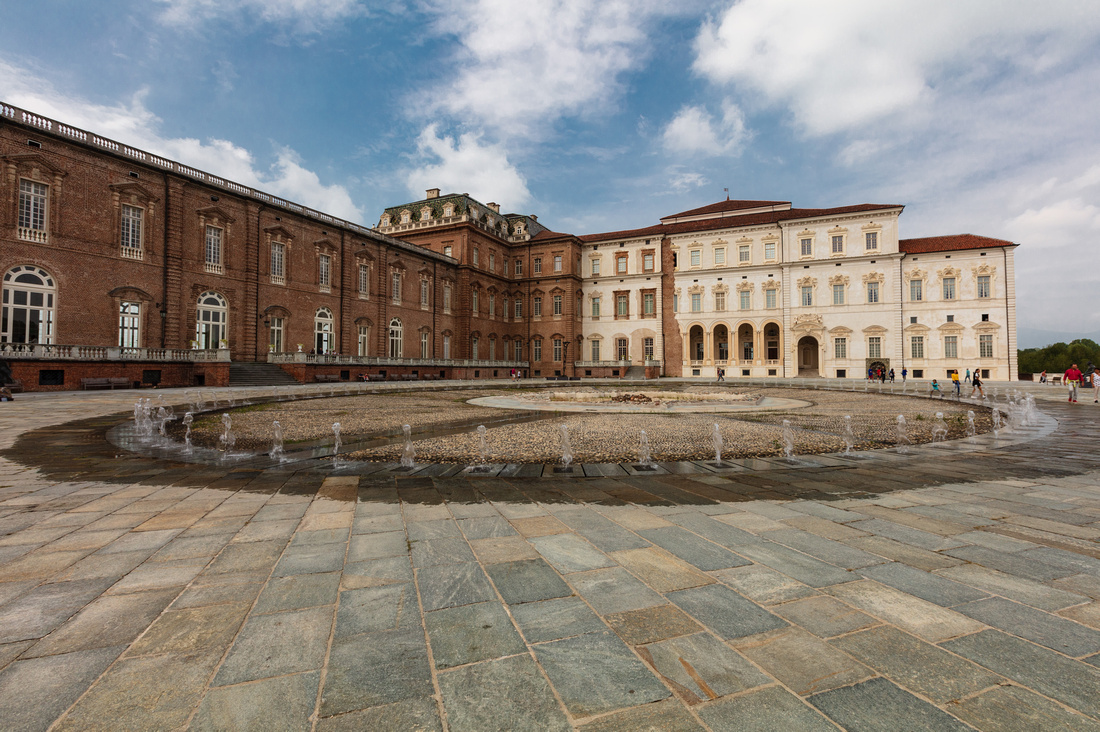 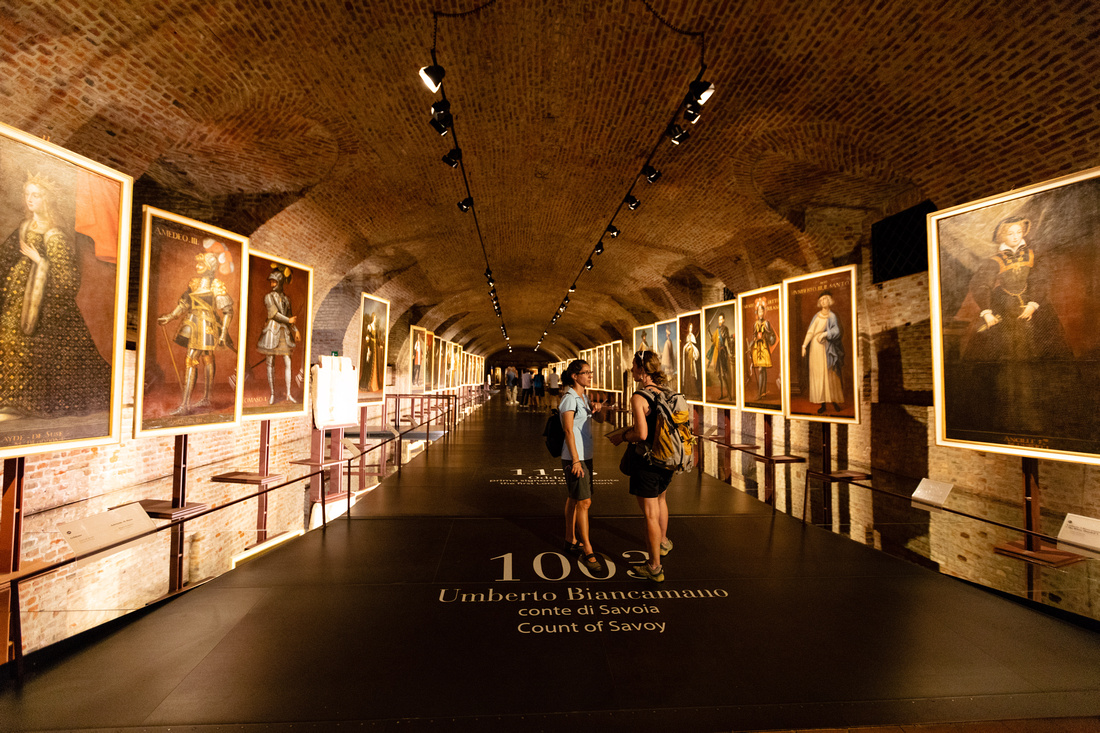 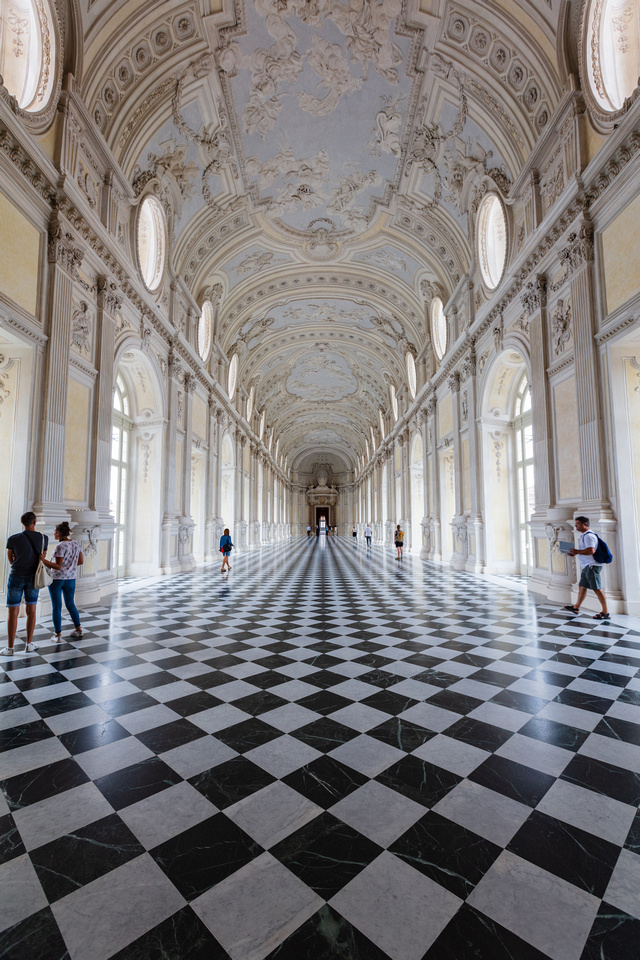 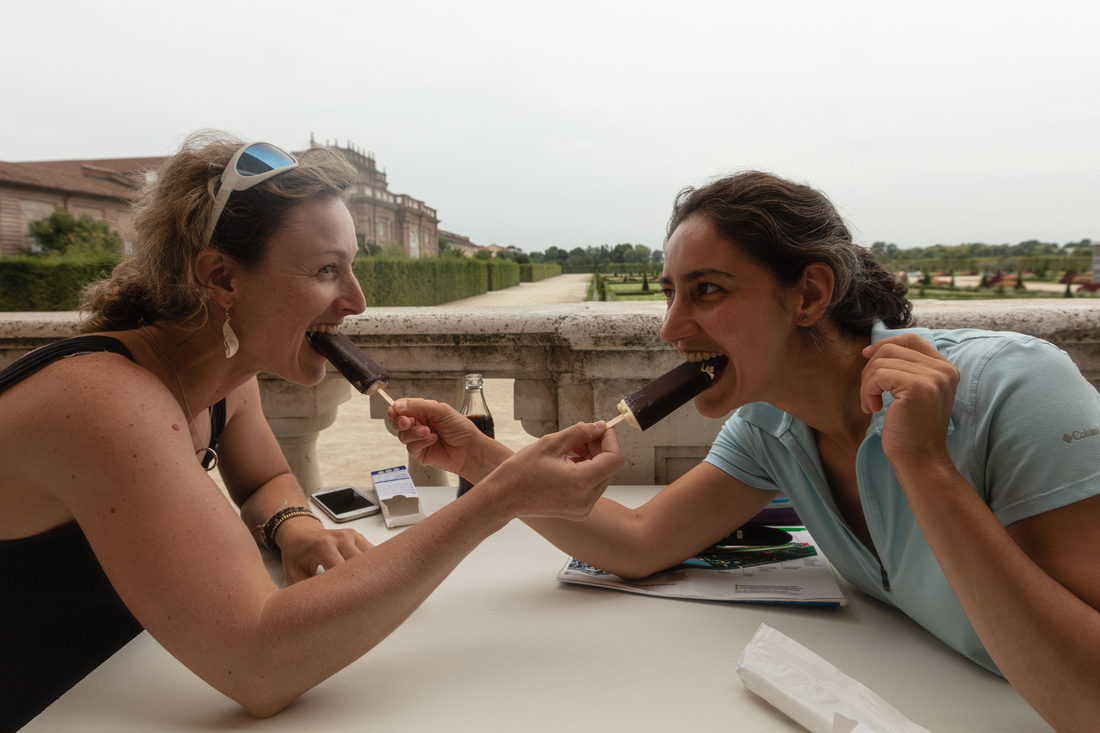 Cinema in Italy started in Torino and therefore they have a well exhibited museum in Mole Antonelliana that walks you from the beginning of film making to present day. The museum is huge, and we barely covered the entire museum in 3 hours but it’s very well done. Mole Antonelliana was built as a synagogue before it was bought by the city. There is lift to the top to see a 360 panoramic view of the city. 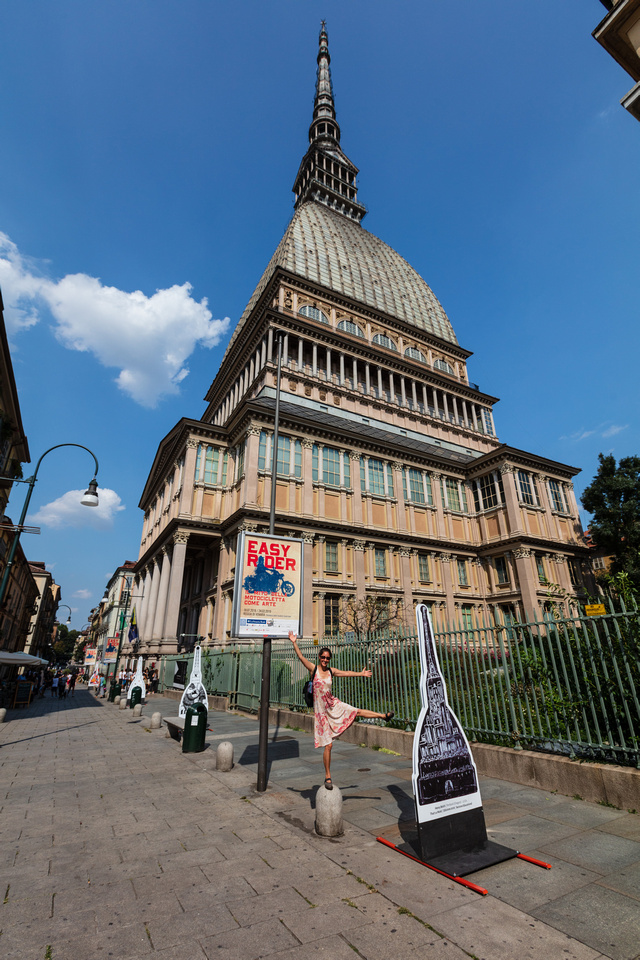 Mole AntonellianaIntended as a Synagogue but now movie museum

From the top of the Mole in Turin

Mouse over image for caption.

David(non-registered)
I so wish I could be there too.... beautiful pics! Curious about your meals, I'd love to see a few pics of meals if they're exceptionally delicious.
[email protected](non-registered)
Bravo Vanessa et Soren !! Moi qui ne suis pas un fan des blogs et autres instagrams, j'adore regarder vos albums de voyage! Bonne route, merci pour cet amical partage d'images! Travelling kisses!
Shama(non-registered)
Vanessa....I re-lived our time together while reading your blog. It was such a fun time. And the pictures are amazing. Also got to see Lerici through your photos, so thank you for that as well
Allison(non-registered)
I was so green with envy I look like a Brussels Sprout. Thank you for sharing this part of your adventure with me. Have fun and be safe.
Jane Baars(non-registered)
Grazie, Vanessa, per le foto. So much fun to travel with you vicariously and virtually. The group met at Palio on Saturday—ça continue!
Best wishes for continued adventures.
No comments posted.
Loading...
Recent Posts
Sun sets on our travels! Sayonara Japan Along the Seto Inland Sea, Japan Osaka, Japan A week in Taiwan Vietnam - Hanoi & Tam Coc Thailand, the land of smiles Midsummer in Sweden Buenos Bergen, Norway Baustelle & Stau - Road Trip to Germany
Keywords
Argentina Sweden Osaka Buenos Aires Chile Asuka Danjiri Fushimi-Inari Kendo Kofun
Archive
January February March April May June July August September October November December
© Terralinda
Powered by ZENFOLIO User Agreement
Cancel
Continue