After the express trip to Montevideo, we went back to Argentina and headed south to El Calafate, a city in Patagonia in the Santa Cruz Province.

The name of the city comes from a small bush that has little dark blue berries, yellow flowers and lots of thorns. The bush is very common in this area and in the old times, they used it to make tar with it and paint boats to make them water-resistant. Calafatear in Spanish means “Caulk” in English. The berry tastes sweet and has an interesting after taste. We also got to taste calafate alfajores and ice cream. Calafate BerriesPain to pick with all the thorns

Before coming here, Vanessa imagined the landscape of Patagonia very differently. There is of course the snow, the ice and the glaciers but there is also the dry, desert like landscape. The rain comes in from the west but dumps all its water on the Andes mountains so not much goes past them, hence there are large dry steppes to the east in Argentina. Cities are few and far in between with vast open spaces.

We saw many wildlife roaming the lands: 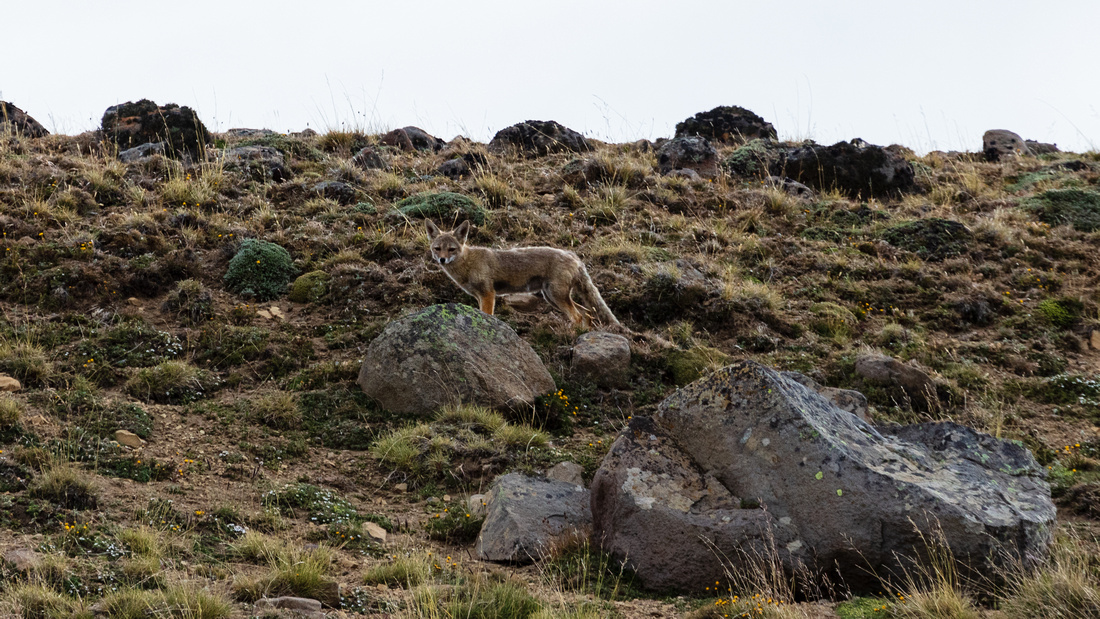 There’s plenty more, we might do a separate blog on the wildlife we saw while in Patagonia.

One of the main attractions in El Calafate, just 80 km away, is Perito Moreno Glacier and honestly, it’s stunning! See the pictures for yourself. Perito Moreno Glacier is 5 km (3.1 mi) wide, with an average height of 74 m (240 ft) above the water and a total ice depth of 170 metres (558 ft) below the water. We walked the 4km platform and the view just got better and better as we got closer. A unique feature of this glacier is the constant ice breaking away from the glacier and the crashing sound it makes as it lands in the water with a big splash. 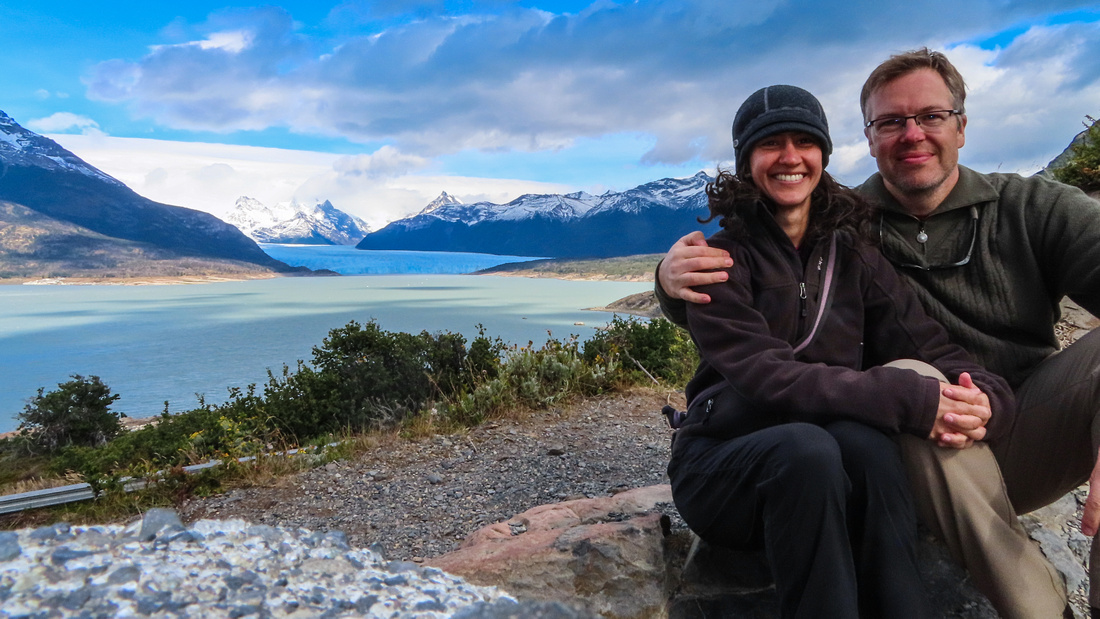 Perito MorenoNo it is not fall but the drought gave the trees their color. Perito MorenoThe Glacier is advancing and creates a dam between the South and North fork of the Lago Argentina. Since the southern part does not have an outlet the water level rises and ruptures the dam. If you look carefully you can see the "dead ice" left on the rocks. Last time it ruptured was in 2016

Perito MorenoSouth side from the boat.

Fun facts: The largest glacier is Antarctica, then Greenland and the Patagonian Icefield is the third largest.

Another day, we went on a day trip to El Chalten, 220 km from El Calafate. We hiked to Laguna Capri and enjoyed the beautiful lake with a view of Mount Fitz Roy.  It is these very mountain peaks that inspired the clothing brand name Patagonia. Laguna Capri Fitz Roy named after the captain of HMS Beagle. (or Chalten - smoking mountain in native Tehuelche) is hiding.

As it is summer, we expected warmer temperatures. The average during the day was about 65F (18C) and 45F (7C) at night. We had brought enough layers so we were prepared. What we were not prepared for was the consistent, nonstop wind. We learned that there is always wind here and more during the summer. At times, people said “today is nice, there is no wind”. We were stunned because there was still plenty of winds. What they meant is that it’s less windy than usual when the gusts reach storm strength. We stayed here 8 nights, we explored the Reserva Laguna Nimez with over 40 species of birds, a wildlife safari conducted by our very own house host that included delicious dinner and Malbec wine. 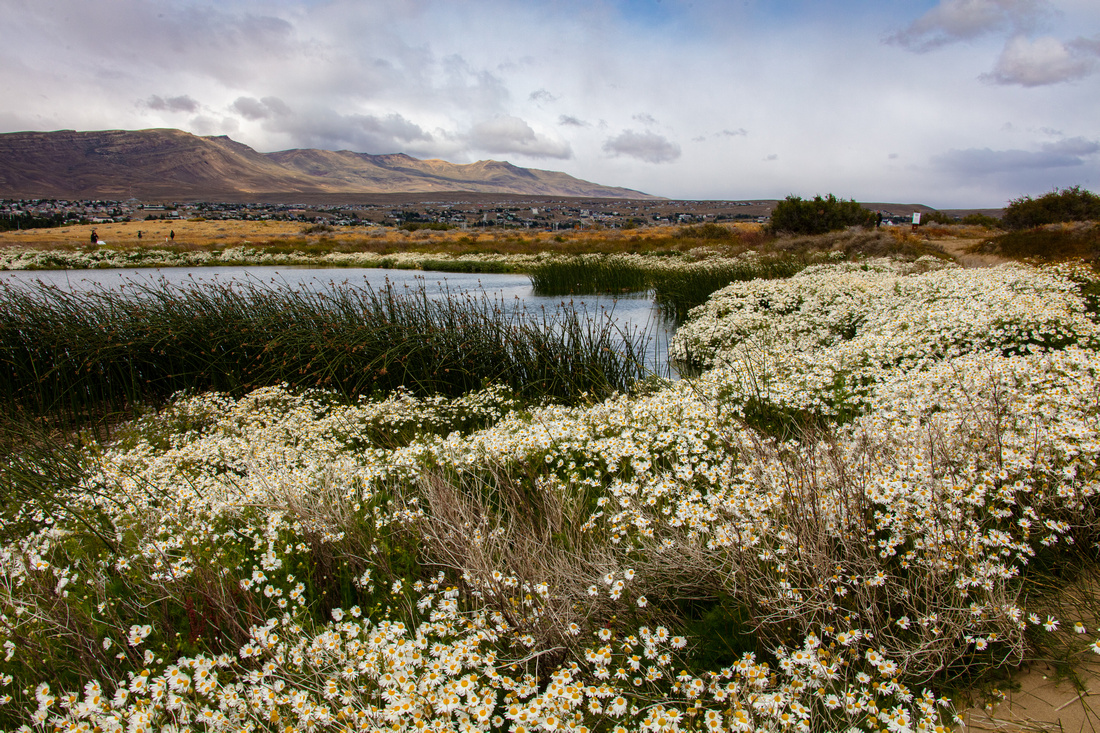 We also did a day of adventure hiking, walking over big rocks, boat rides and lunch with a view of a glaciers and icebergs. A little yoga before lunch Nobody went for a swim

Two GlaciersActually there are three - but I assume they used to be one.

After a great week and a long hike we treated ourselves to a nice farewell dinner. At the end of the week, we are grateful for the new friends we made and old friends we met up with again that we first met in Oaxaca last November!

Mouse over the images for captions.

Greg(non-registered)
Absolutely amazing! Your world tour is nothing less than breath taking. thank you for sharing with us. miss you guys!
Gino(non-registered)
Thank you so much Vanessa and Soren for sharing the wonderful images and the vivid impressions. It's an inspiration and the closest thing to actually being there.
Ciao!
Wow! Unbelievable. Gorgeous. Thank you for the wonderful, amazing photos.(non-registered)
Seems like a dream, following your fabulous trip. Thanks! Fran P
Maud(non-registered)
Great pictures, great country and great to see you two doing wonderful in South America ?
Gros bisous à vous deux, vous avez l'air d'aller super bien !!!
Mark Solon(non-registered)
These pictures are stunning! The glaciers are so impressive and so much wildlife to see. We need to add Patagonia to our bucket list.
No comments posted.
Loading...
Recent Posts
Sun sets on our travels! Sayonara Japan Along the Seto Inland Sea, Japan Osaka, Japan A week in Taiwan Vietnam - Hanoi & Tam Coc Thailand, the land of smiles Midsummer in Sweden Buenos Bergen, Norway Baustelle & Stau - Road Trip to Germany
Keywords
Argentina Sweden Osaka Buenos Aires Chile Asuka Danjiri Fushimi-Inari Kendo Kofun
Archive
January February March April May June July August September October November December
© Terralinda
Powered by ZENFOLIO User Agreement
Cancel
Continue