Before sharing our next adventures, we need to clarify a detail from the previous post. For anyone wondering or confused, the picture of the Homo Sapiens was taken by Vanessa but it is not Vanessa. We were hiking in El Chalten when we noticed a girl getting undressed on top of a cliff. Her friend took a picture and then they switched. They were far away (see picture) but the camera zoom captured it close. At the trailhead, we saw them again and heard them speak German. That’s how we figured out where they were from. Vanessa was happily wearing her 5 layers of clothing as it was pretty windy. 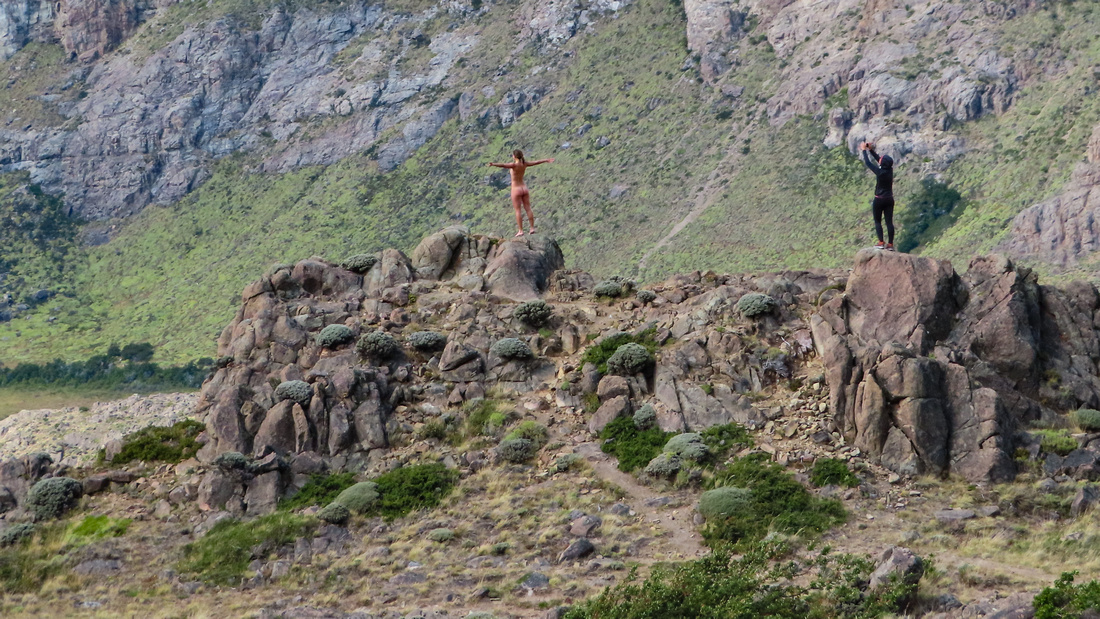 After a fantastic week in El Calafate and enjoying all it’s surrounding beauty, we made our way further south to Punta Arenas, Chile. By bus, it took about 10 hours with a layover in Puerto Natales but buses are pretty comfortable and very punctual. Really the best way to get around

here. Punta Arenas is the southern most city in Chile. We rented a car which made reaching some of the destinations much easier. 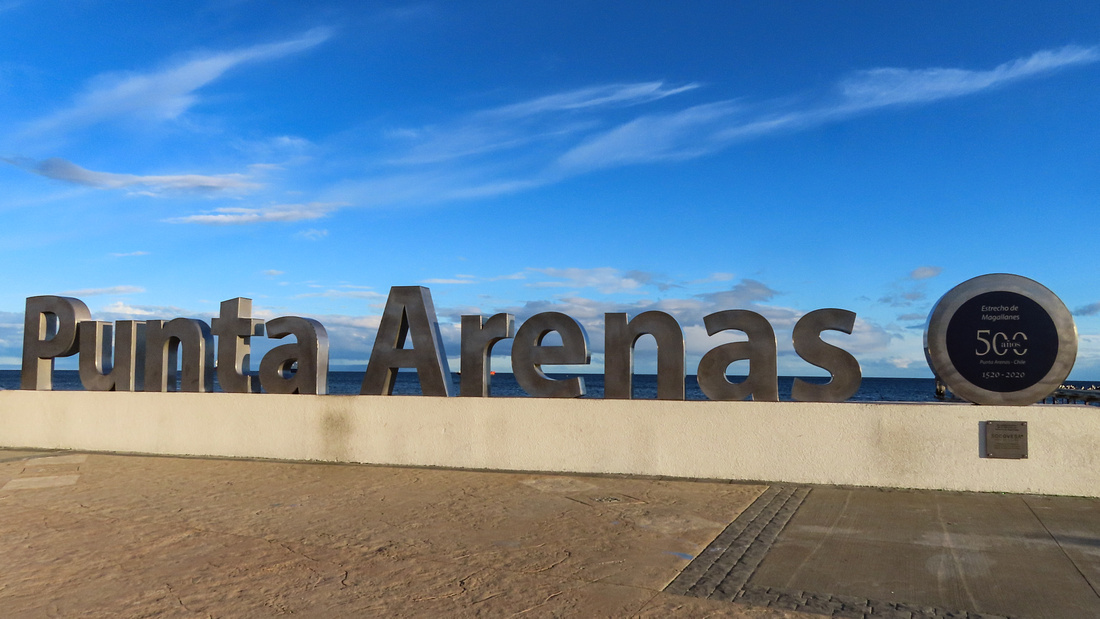 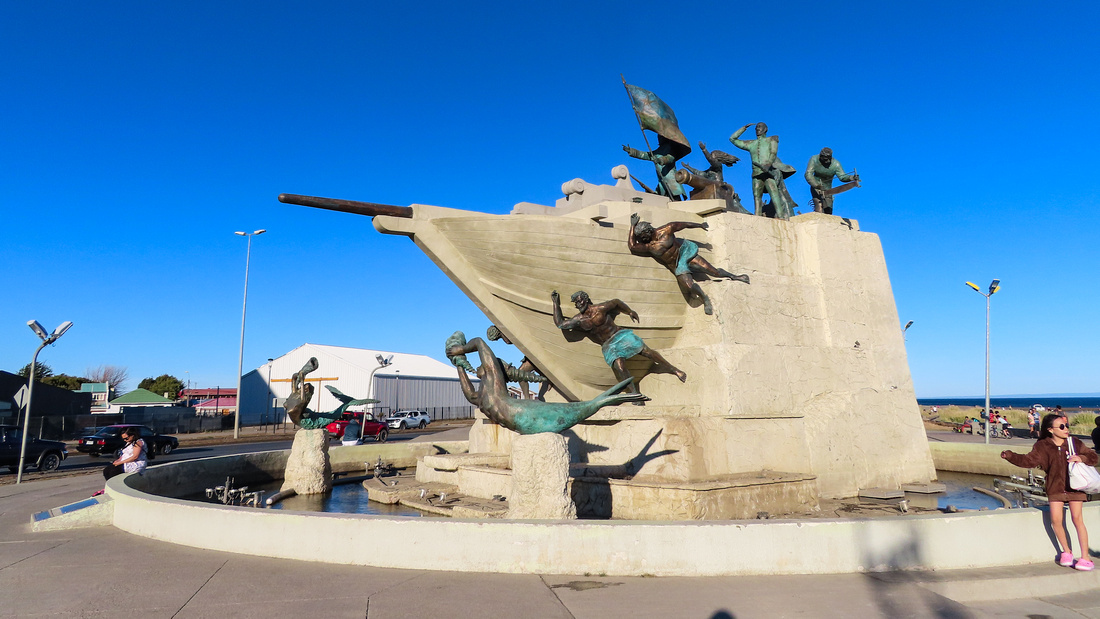 Monument to the PioneersPunta Arenas 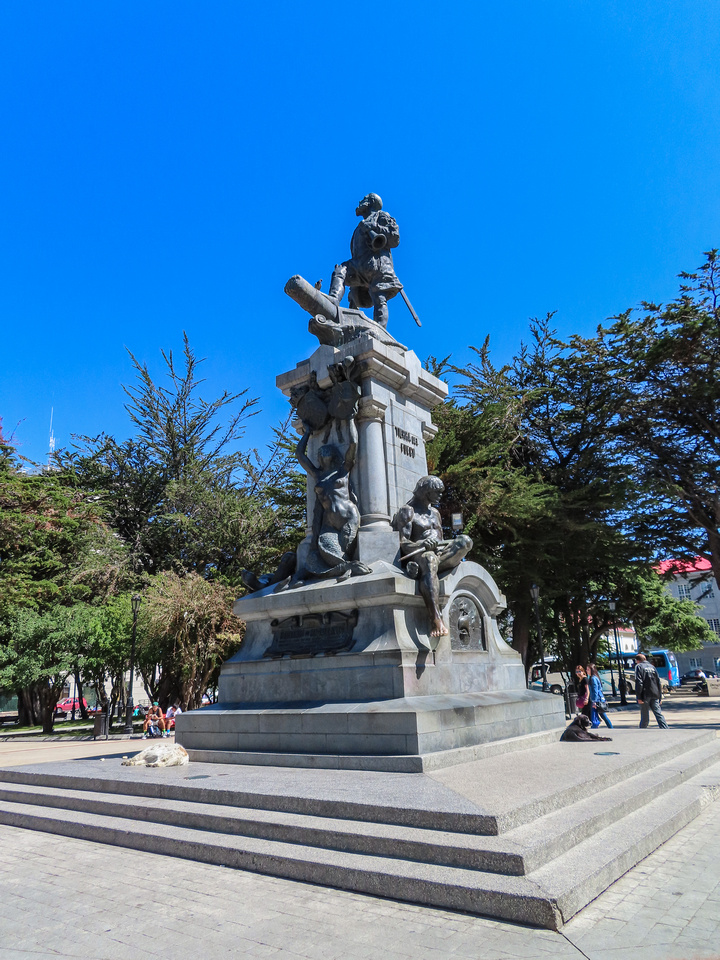 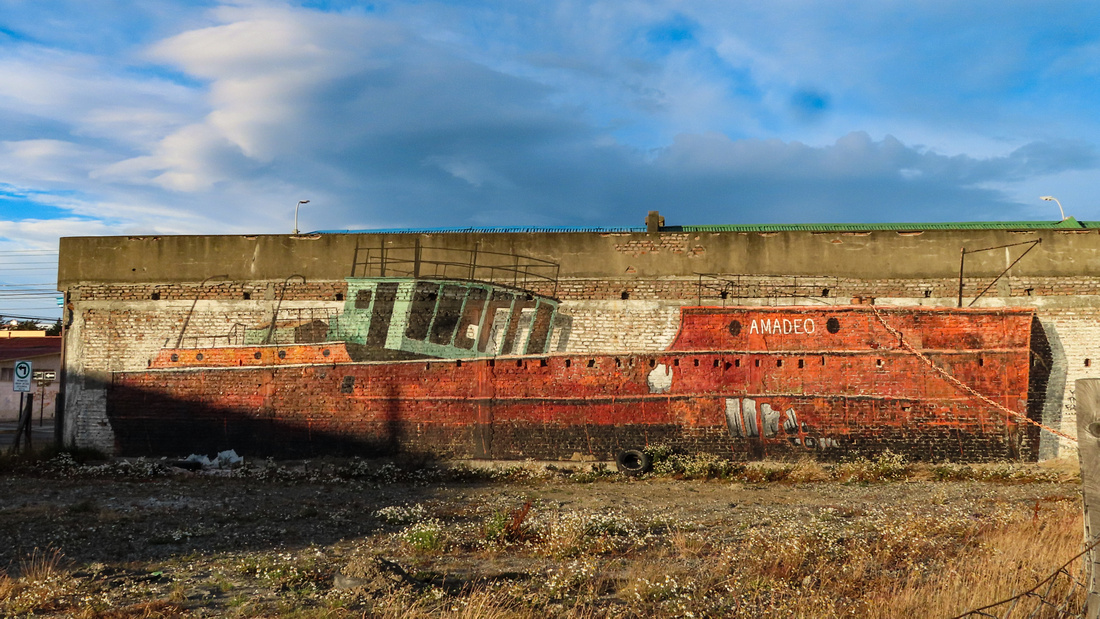 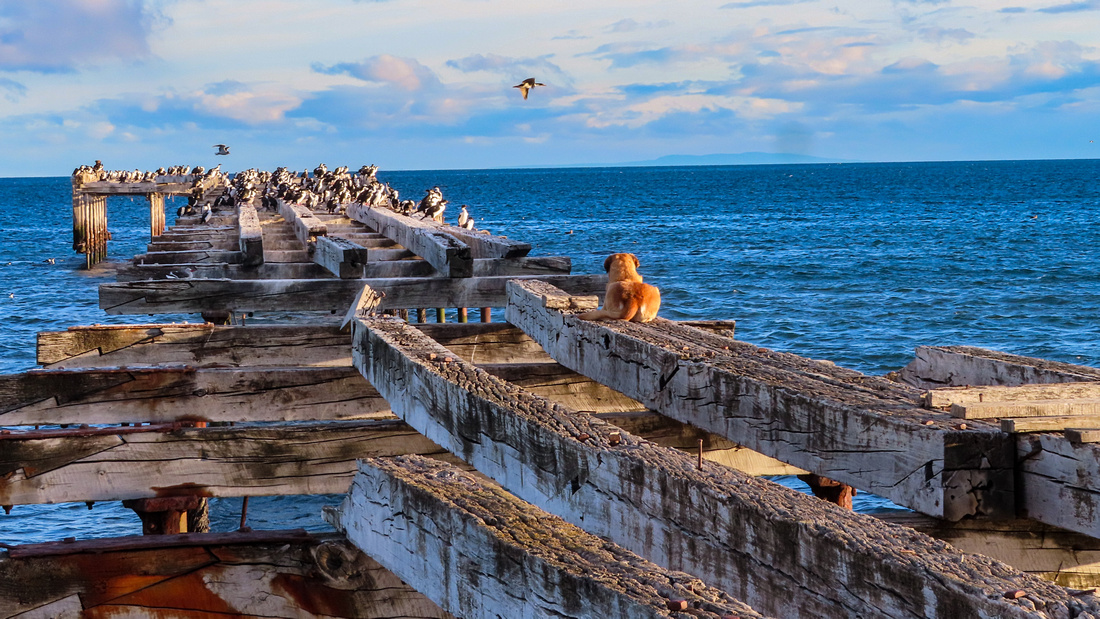 First stop, Tierra del Fuego! We drove 5 hours until we reached the Pingüino Rey (King Penguin) colony. The King Penguin colony is fairly new.  About 12 years ago, a farmer noticed a family of the King Penguin on her property then the following year, they came back again. Slowly the word got out and tourists started to arrive. Unfortunately, some people lack the knowledge on how to respect the Penguins. They put hats on the Penguins and posed next to them. It culminated one day when a penguin was put in the trunk of a car and stolen. The farmer closed the area off for visitors. She got organized and hired security guards with her own money in order to keep the area secured and protected. Today, a platform has been built at about 50 m (164 ft) from them. It might seem a little far, but it allows us to observe them without interfering.  Additionally, limited number of people can enter at any given time. They were incredibly fun to watch. They would wobble around, splash in the water, shake their wings to dry out but many also just stood happily still and steady like soldiers. 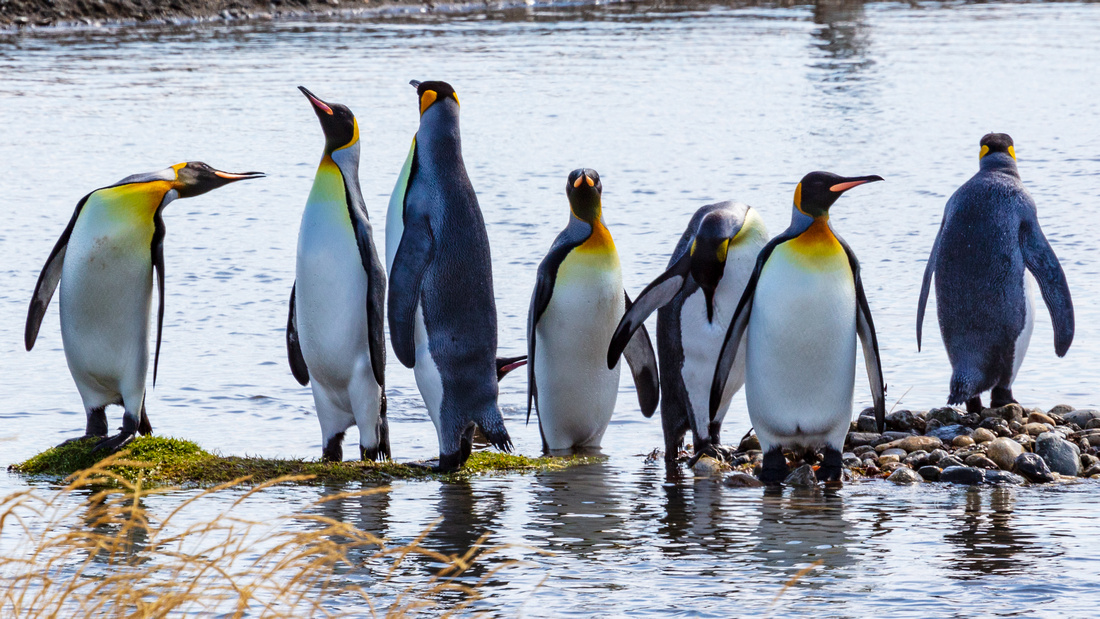 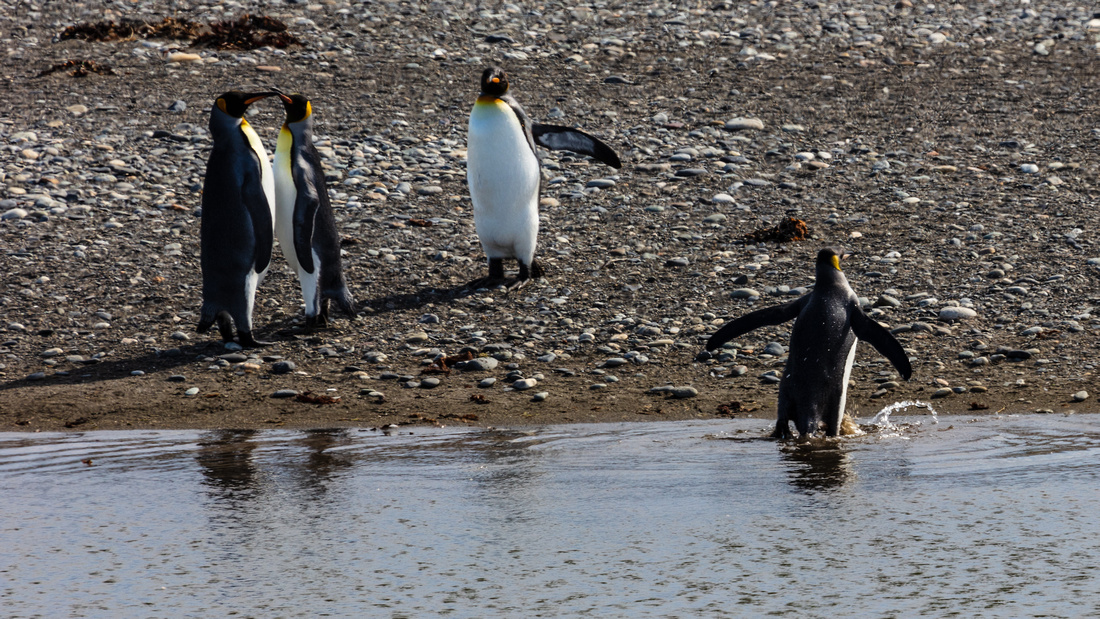 Here is a video of clapping wings:

We learned that this day – February 5, 2019 was the hottest day on the record since they started keeping track. The temperature was up to 29° Celsius (84.2° Fahrenheit). Historical Average is 15°C (59° F). The climate change is definitely happening.

Have you ever wondered why the area is called Tierre del Fuego?  When the Europeans arrived here, they would see the natives making fire at night time, every night. So the name stuck “Land of Fire”.  The natives made fire at night to keep warm and cook food. Over the years the natives were killed and the only fire you will see today is flares from the oil and gas industry.

Second stop, Pali Aike Volcanic Fields! Located 122 miles from Punta Arenas. Pali-Aike is a Tehuelche name that means Desolate Place.  Their activity began 16 million years ago, when the Chile Rise collided with the Peru-Chile Trench. We were told by the park ranger that the last eruption took place 10,000 years ago. We walked to the center of the crater and were surrounded by the many years of volcanic rocks. The various colors were stunning. 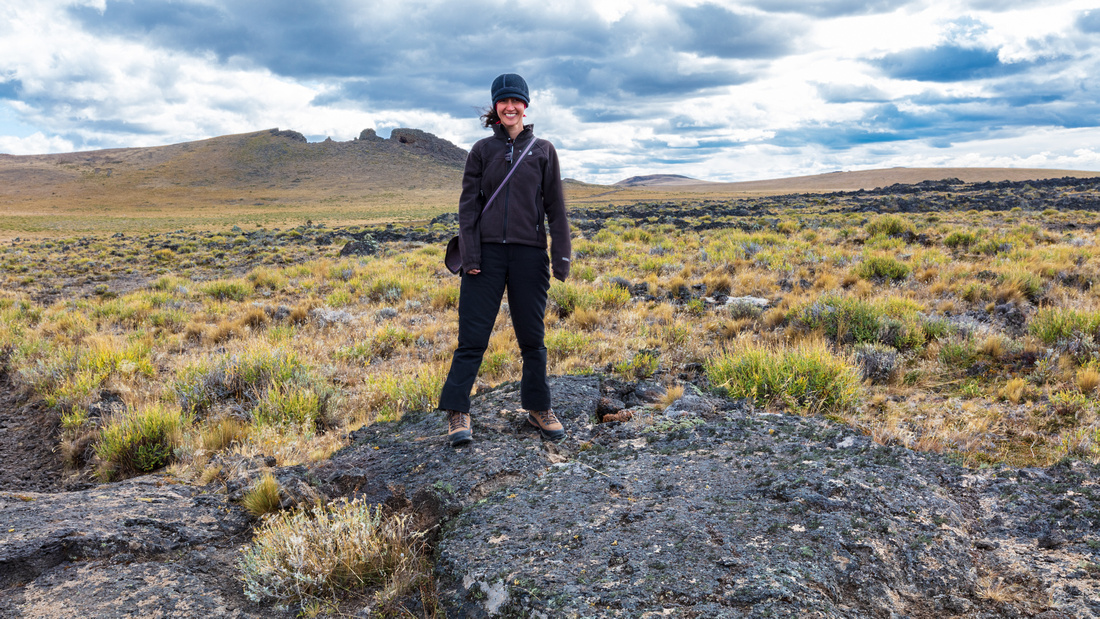 Pali AikeOn the way to the crater

Third stop, Fort Bulnes! Established in 1843 with 22 volunteers send by President Bulnes. In 1943, a replicate of the fort was rebuilt to commemorate the history of the region.  The site for the fort was chosen at a strategic location to protect the Strait of Magellan. But due to lack of water and resources, it was a hard place to live and colonize. Soon there were no more volunteers and the president started sending prisoners hence making it a Penal Colony. In 1848, the site was abandoned and where the people moved, the city of Punta Arenas was eventually established. Three years later, in 1851, the prisoners revolted by killing the military and the governor. With no more volunteers and unable to send prisoners for fear of revolt, the president started sending immigrants. The city grew and the economy blossomed as Punta Arenas became an important port for ships needing provisions on their crossing. The glory days ended in 1912 when the Panama Canal opened. In the 1940’s oil and gas was discovered in Tierra del Fuego and Punta Arenas had a renaissance. The modernization of the industry has left ghost town scattered around as less workers were needed. 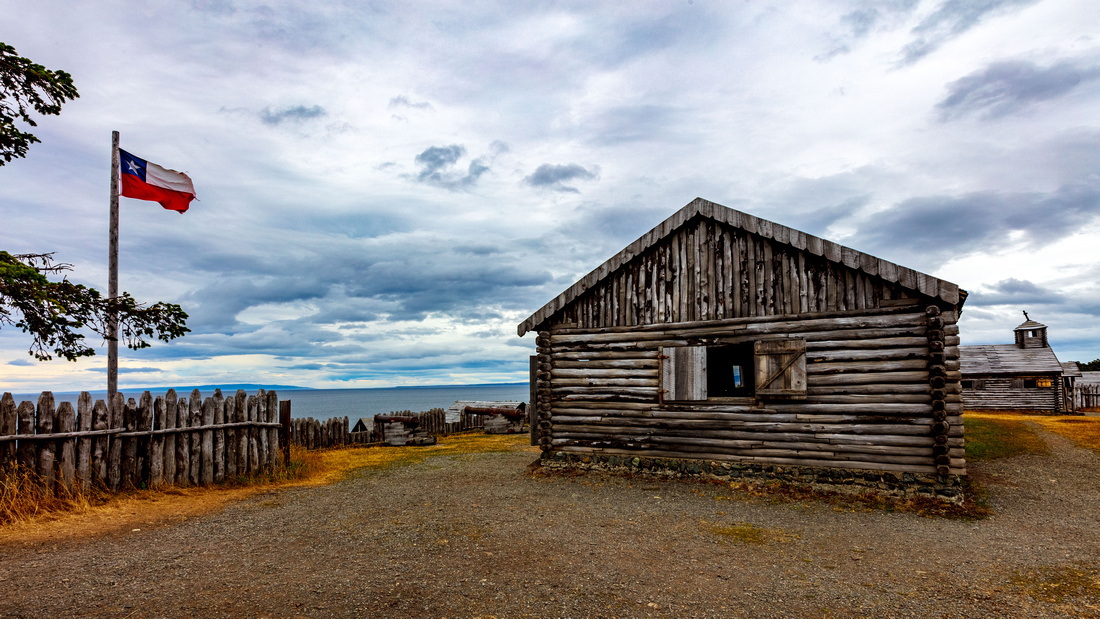 In October 1520, Ferdinand Magellan was the first European explorer to pass through what we call today the Strait of Magellan. We saw the replica of his ship the Nao Victoria, the first to circumnavigate the world, proving that it is round. Magellan himself did not survive the trip. He died in a battle in the Philippines. Out of the 4 ships and about 260 crew that left Spain only the Victoria made it back with 18 crewmembers. Standing on the ship on a relatively warm day with just a little rain in the air was still a rather cold experience with the bone chilling wind that never stops. 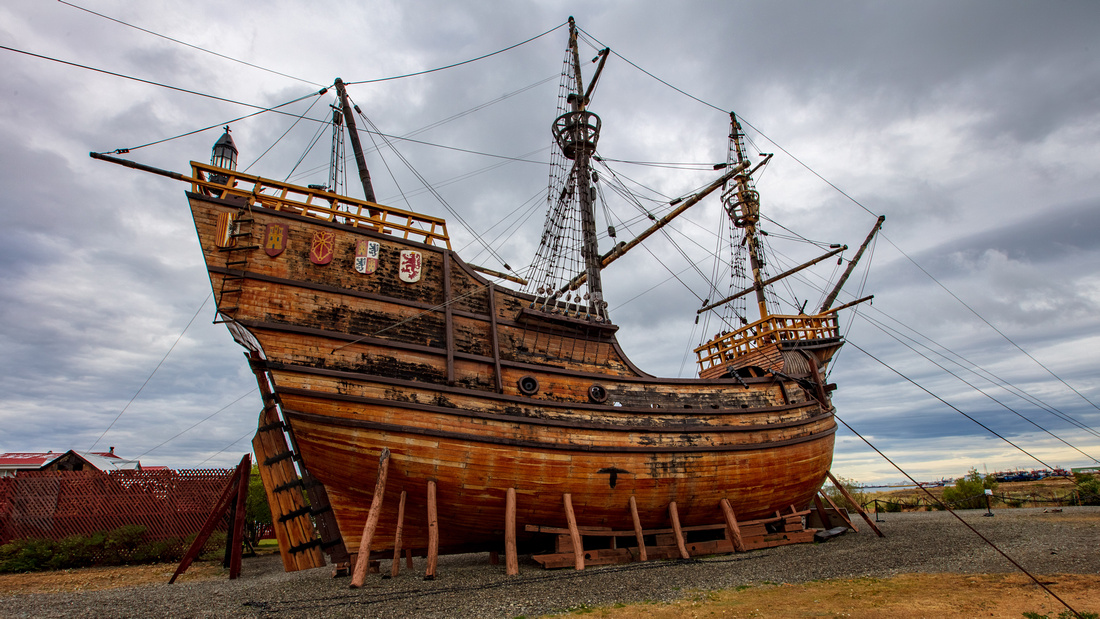 A special thanks to Bill H. who put us in contact with a friend of his, the artist Pedro Villanueva. We had a delightful afternoon chatting and getting to know each other. He is working on a commissioned project from the city to commemorate the 500th anniversary of the discovery of the Strait of Magellan. It’d be nice to be back and see it. 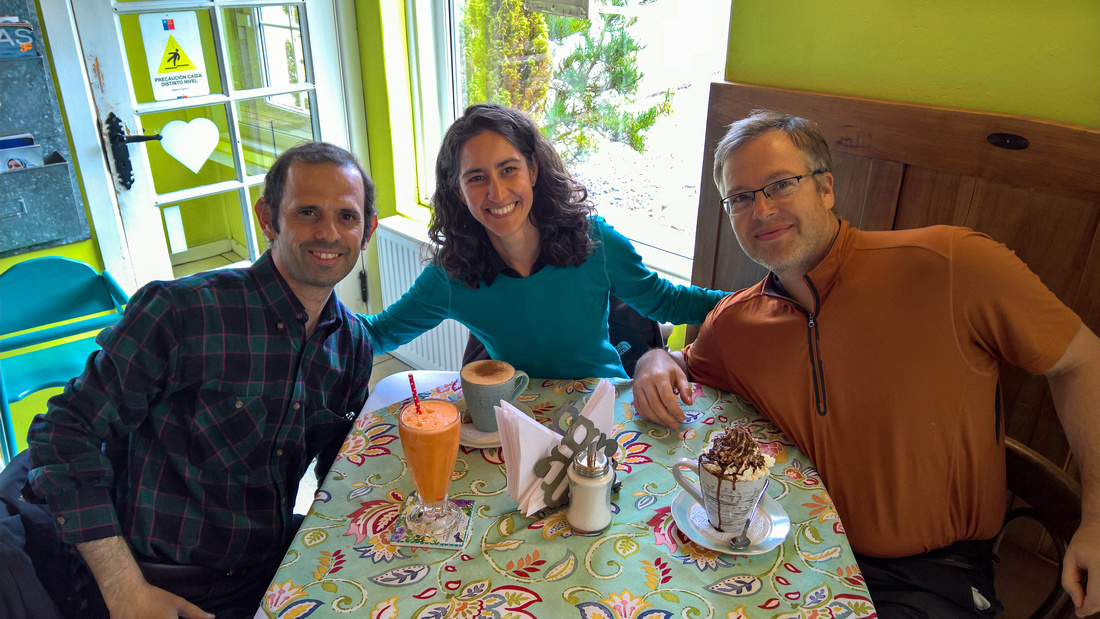 Finally, we learned that Patagonia comes from Patagón. The Magellan crew consider the natives to be giants with large feet. The Spanish word “pata” means “paw” in English indicating that the Magellan crew did not believe that the natives were humans.  Interestingly, the word Patagón is also thought to describe a beast in a chivalry romance published 10 years before Magellan’s voyage. Perhaps Magellan had read it. 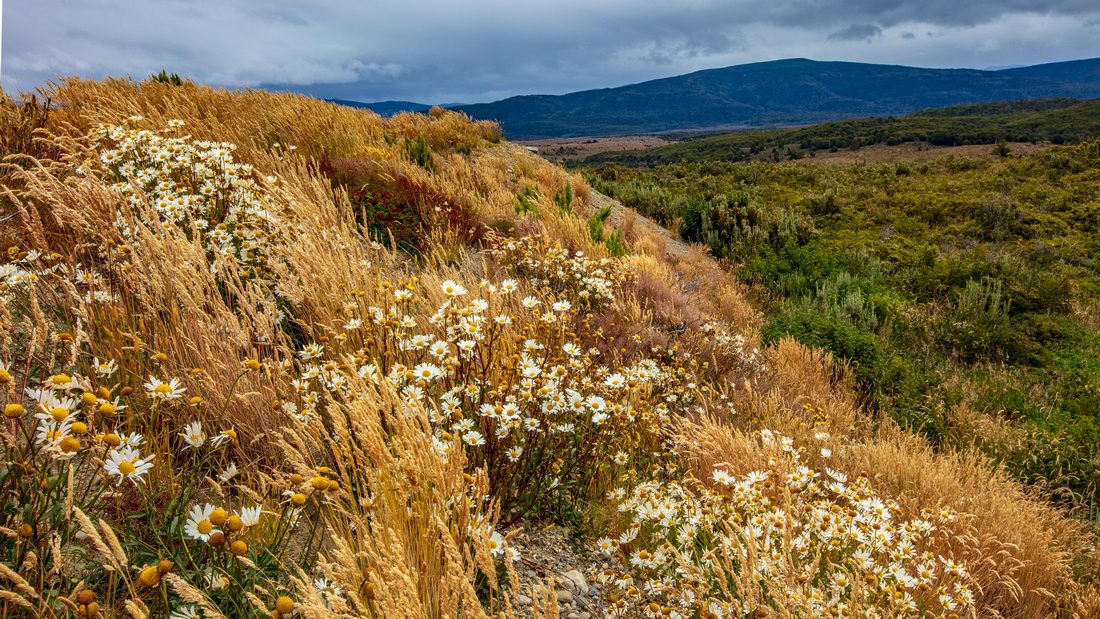 As we explored the vast lands, we continue to see many wildlife.  Here are a few that we saw: 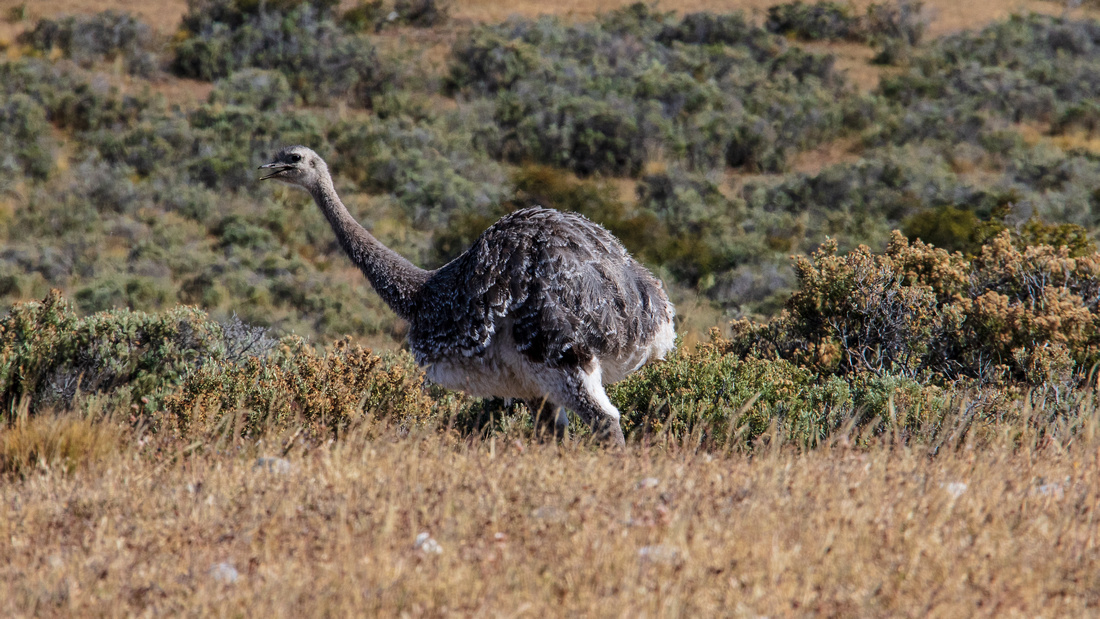 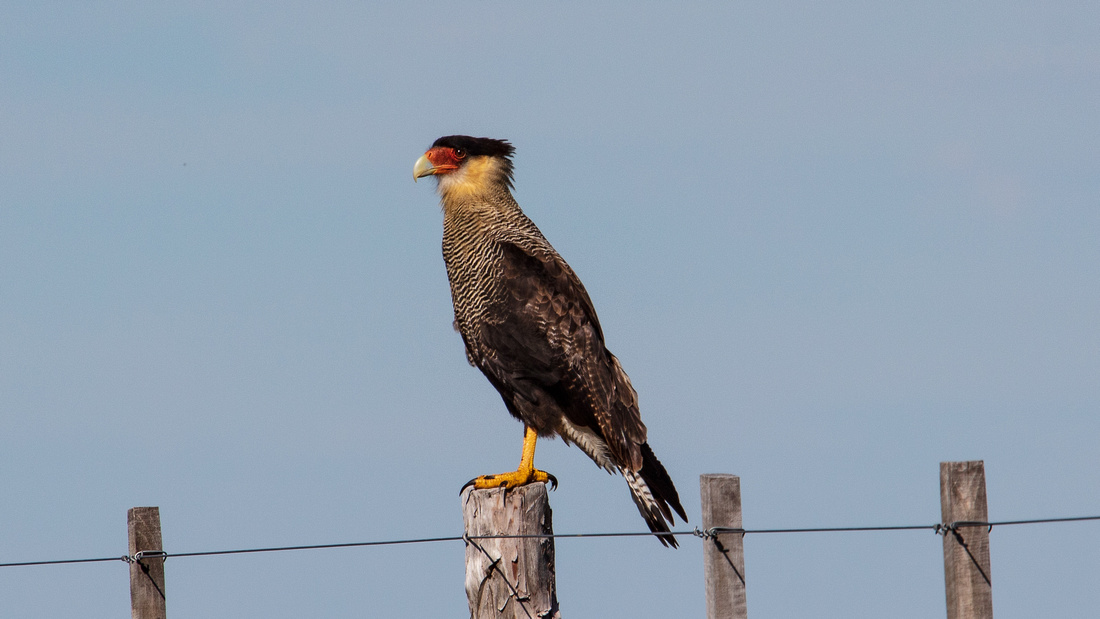 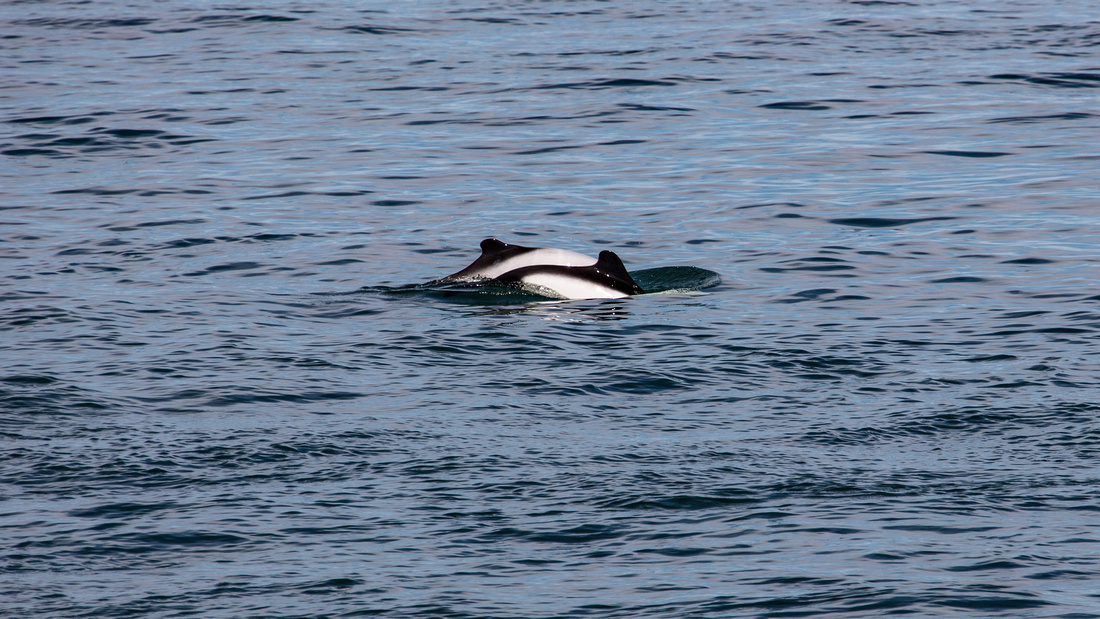 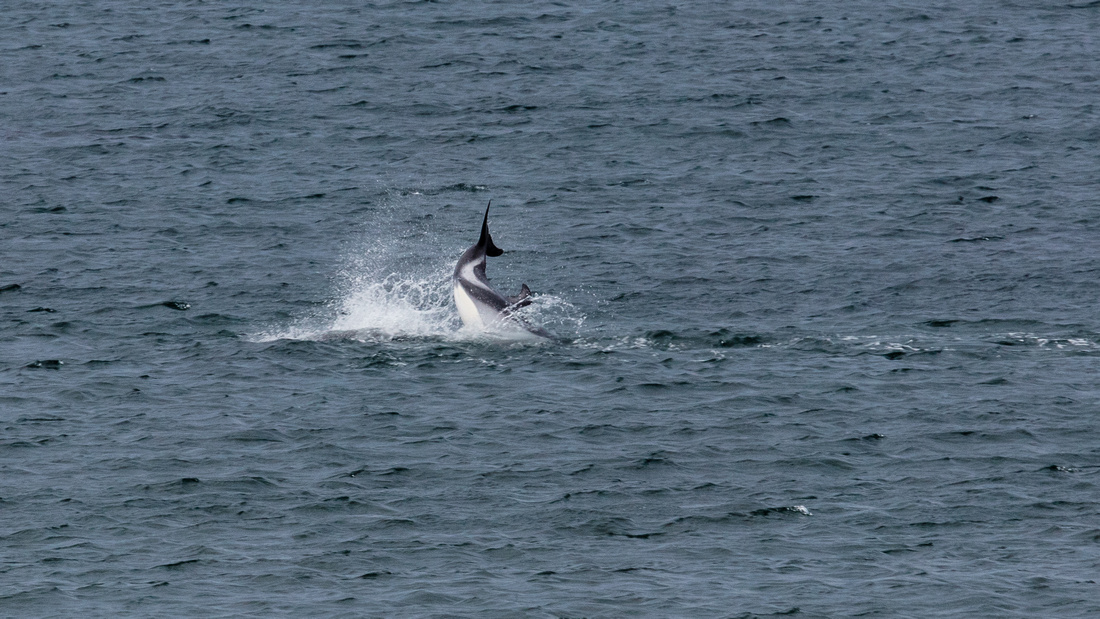 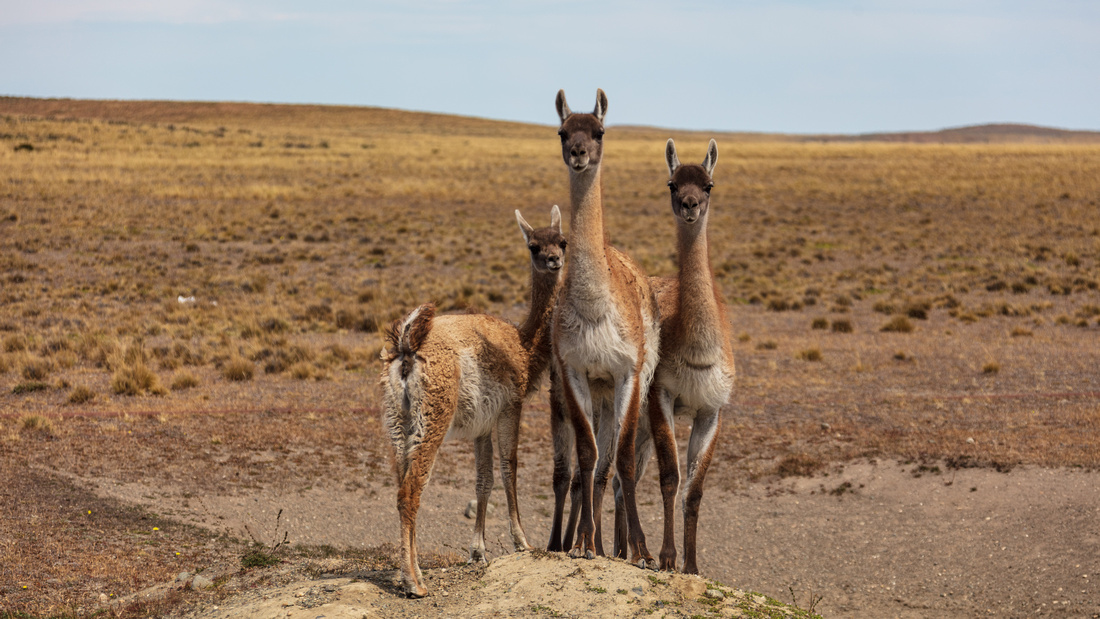 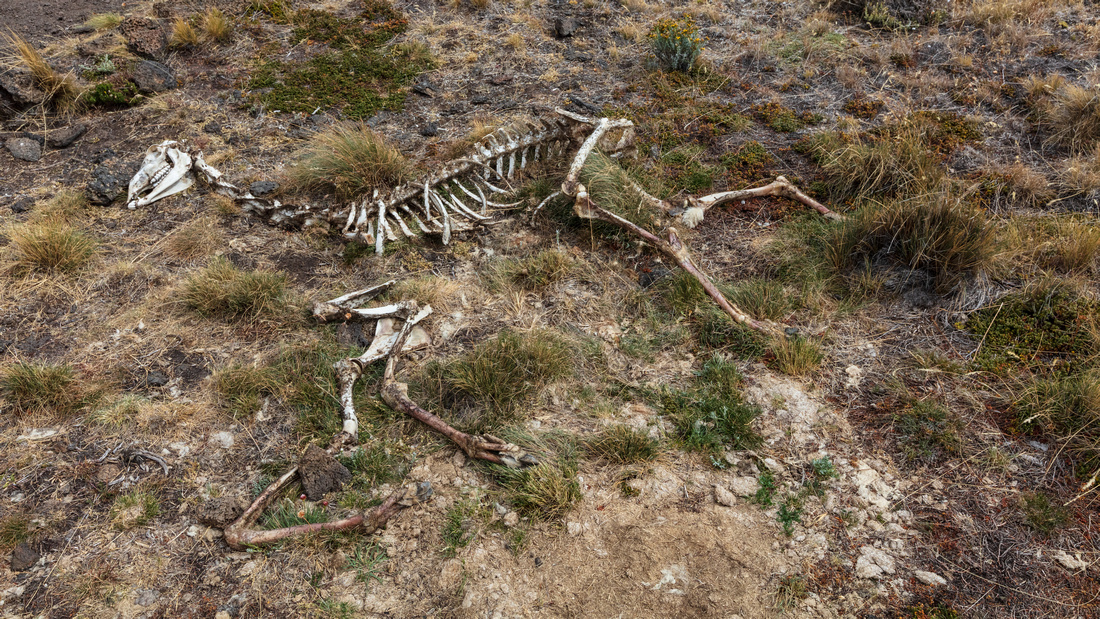 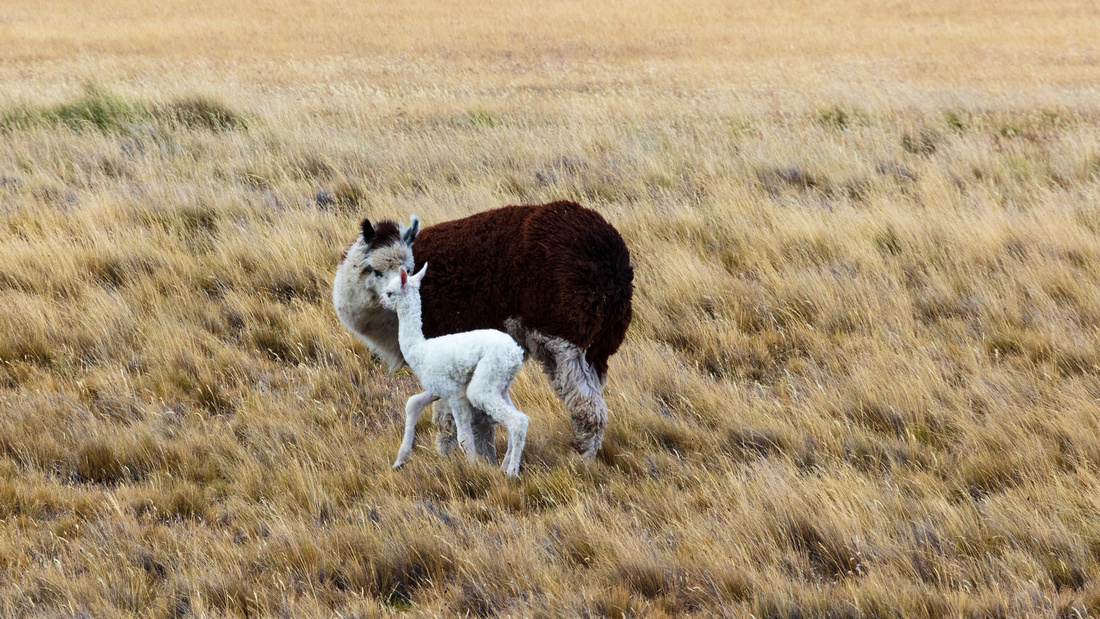 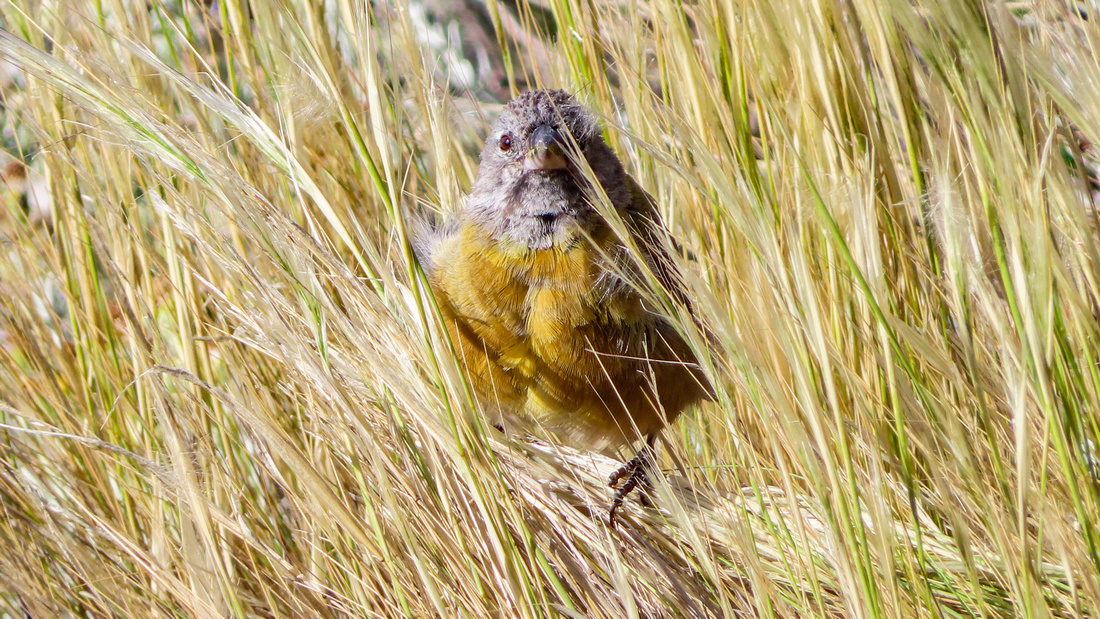 *mouse over image to read caption.