After Patagonia, we jumped over to the capital of Chile, Santiago.  We decided to do the Lake District another time. We took the Chilean airline, SKY Air and within 3 hours we reached warmer temperatures and less wind. From our new place we had a nice view of Santa Lucia Hill and we were walking distance to Barrio Lastaria, a very trendy and happening place with cafés, shops, ice cream parlors, street artists and street vendors.

When Pedro de Valdivia conquered the hill on December 13, 1540, the same day marked the celebration of Santa Lucia, a Sicilian Saint and so he named it and built two forts out of stone and lime that could fit 8-12 cannons each. The pre-colonization inhabitants originally called it Huelito or Heutrecan. At the time it was just a rock on the edge of the city. In 1872, Benjamín Vicuña Mackenna decided to make the hill a new attraction. Different types of trees, plants and other vegetation were planted on the extinct volcano to make it more inviting. Today, it is it’s a beautiful park in the center of the city, with winding paths and multiple panoramic views of Santiago. Along the way to the top are fountains and seating areas so that you can enjoy the park and take your leisure time to climb up. 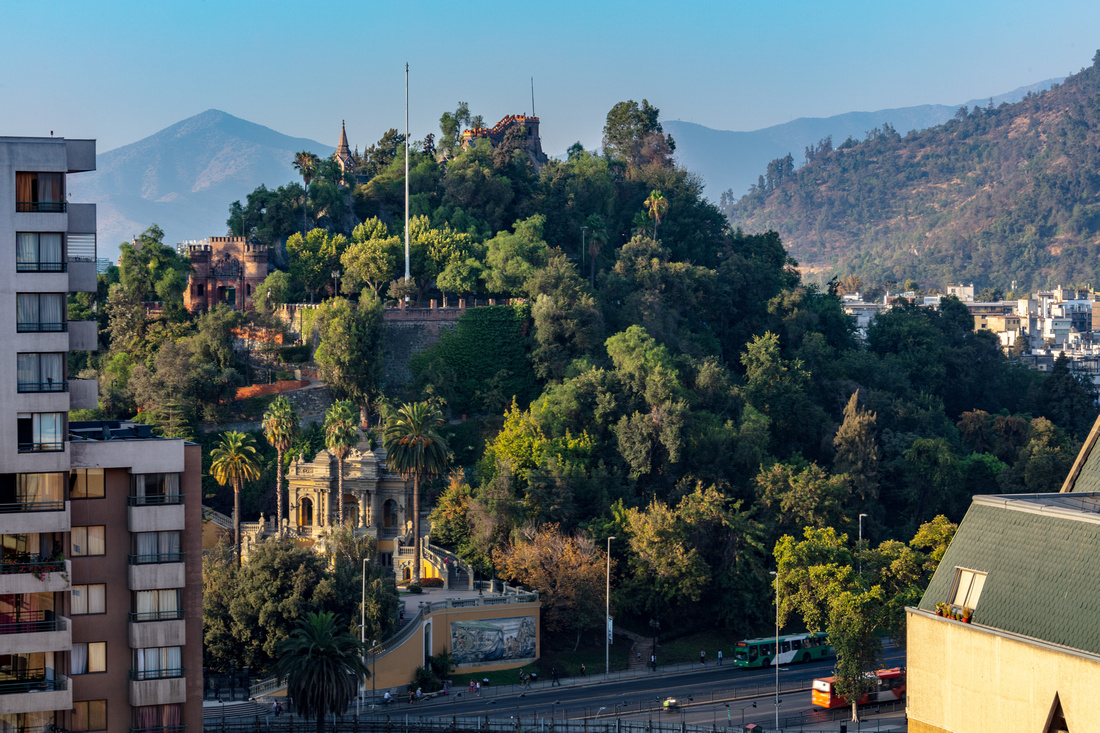 Santa Lucia hillView from the apartment where we were staying 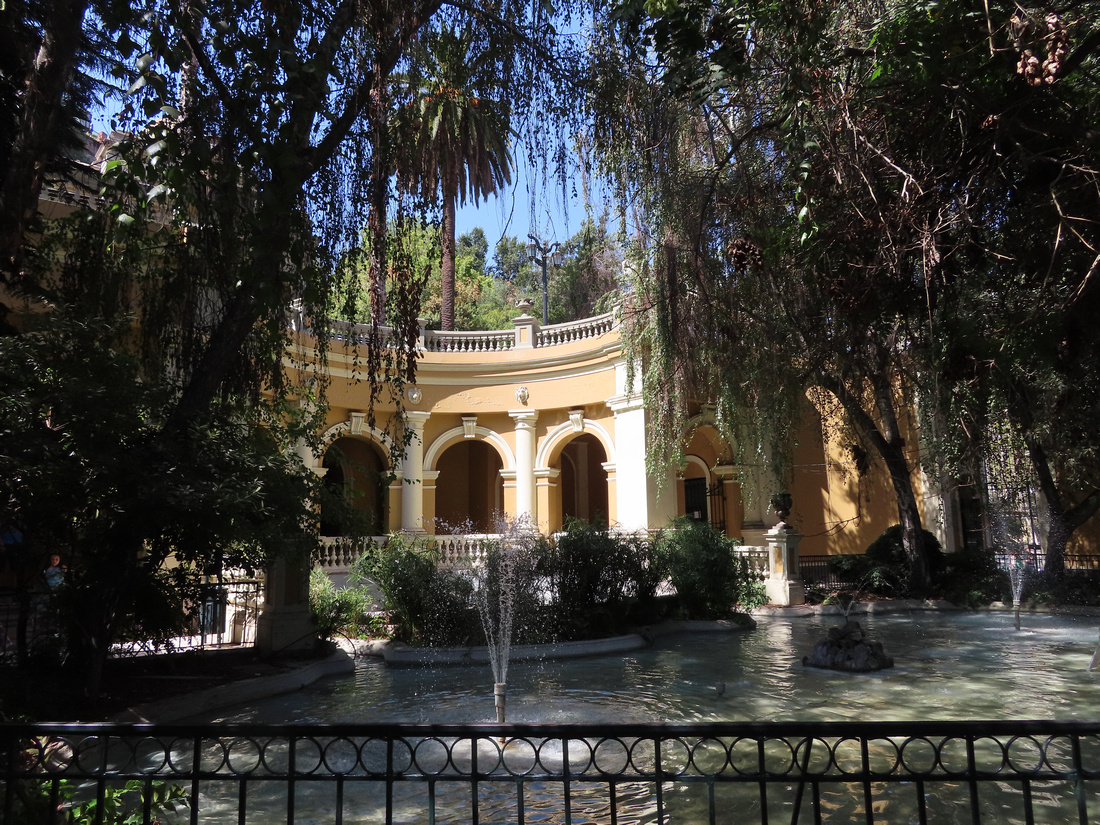 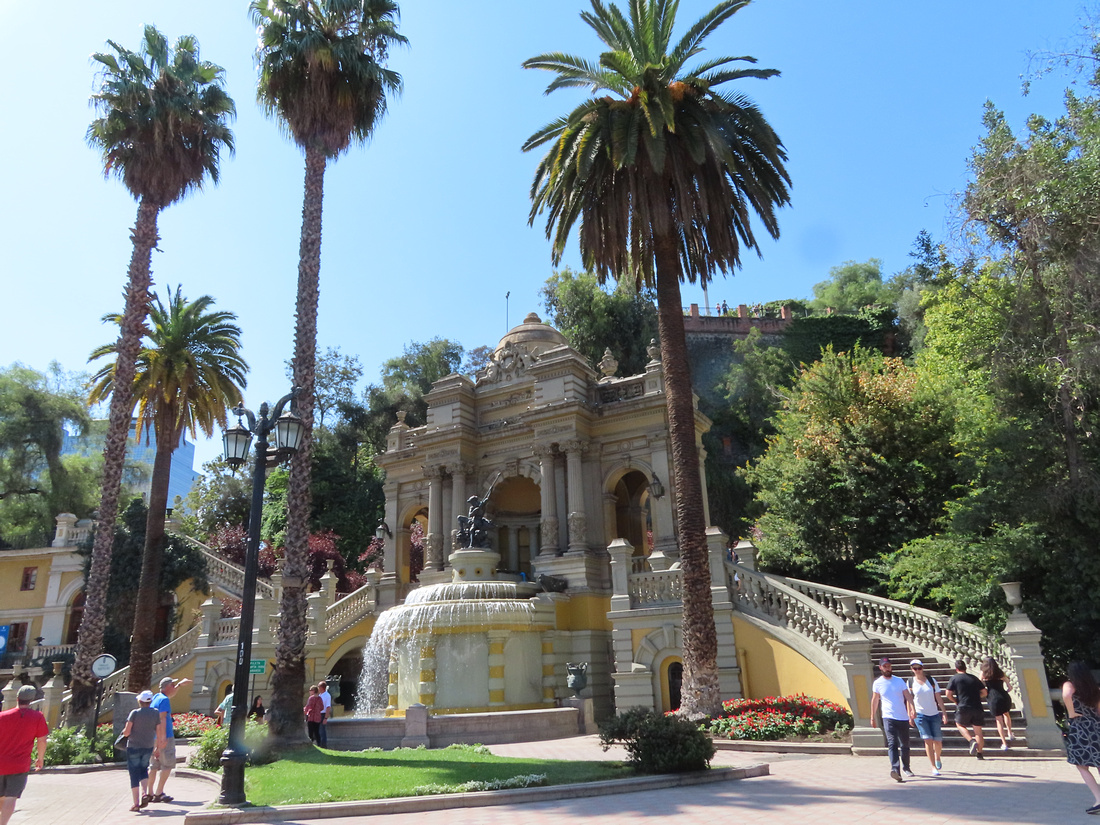 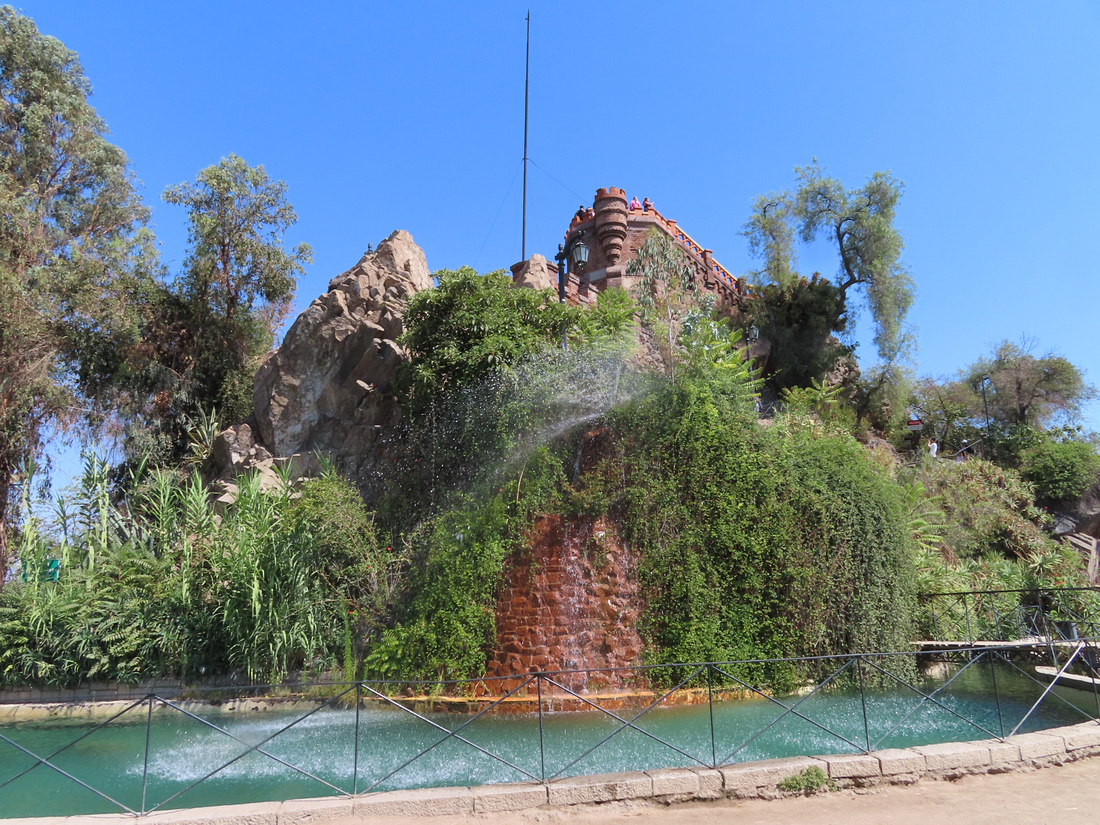 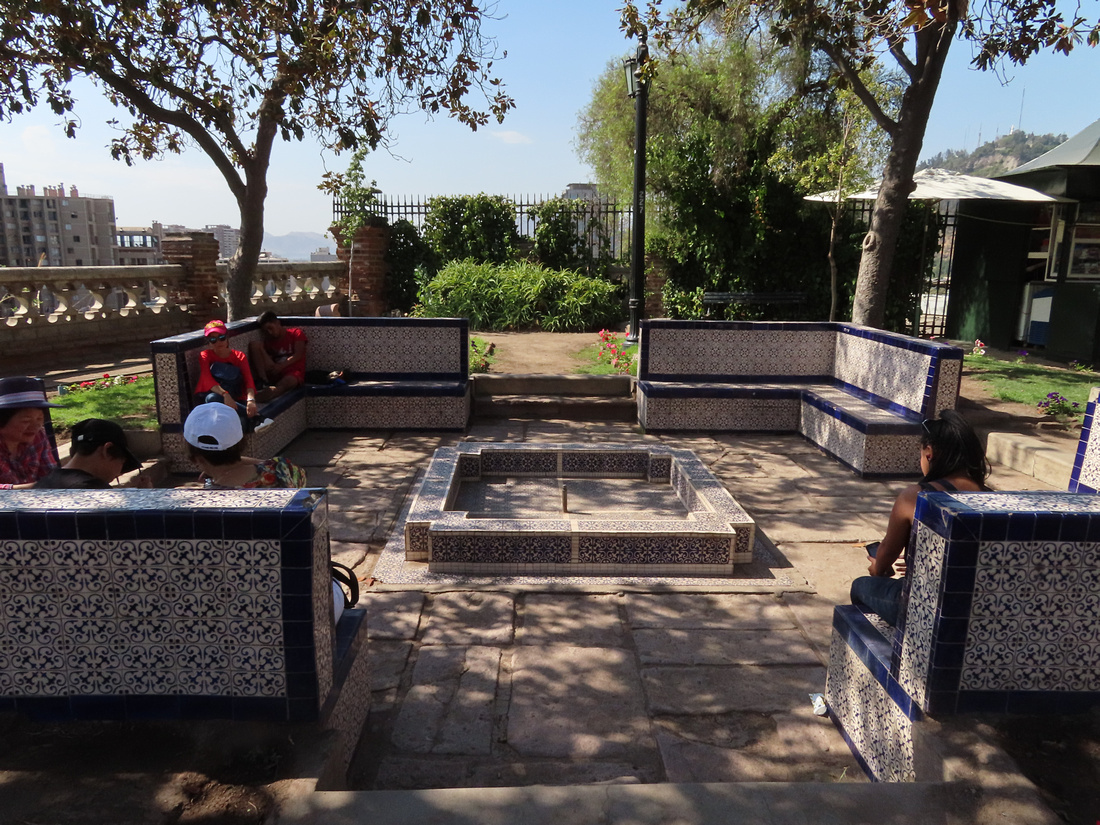 Moorish benchesReminded us of Elche, Spain 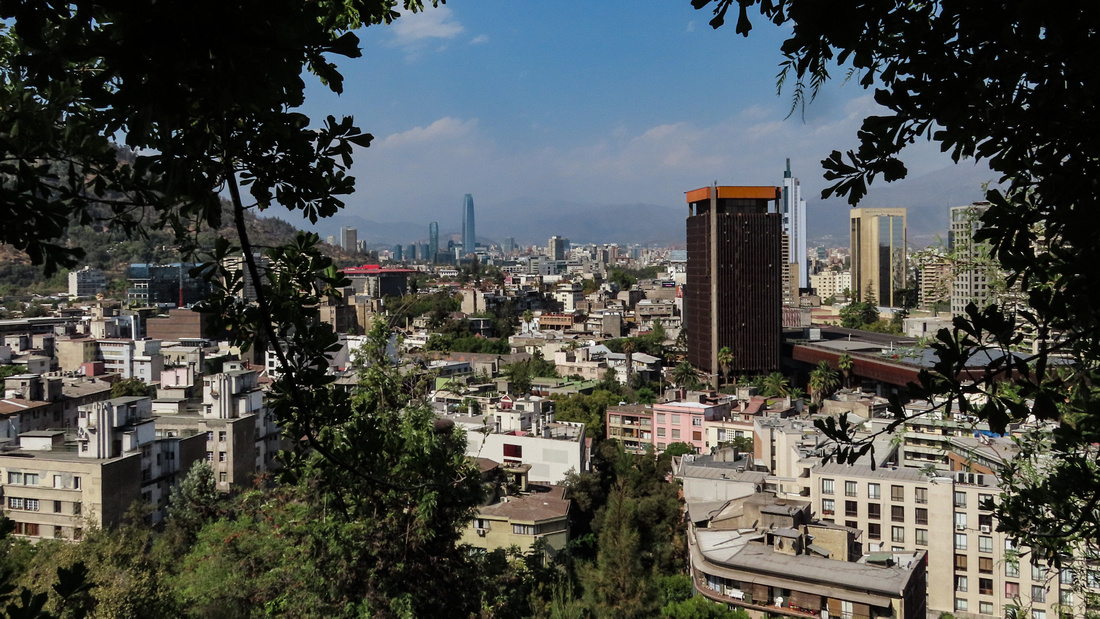 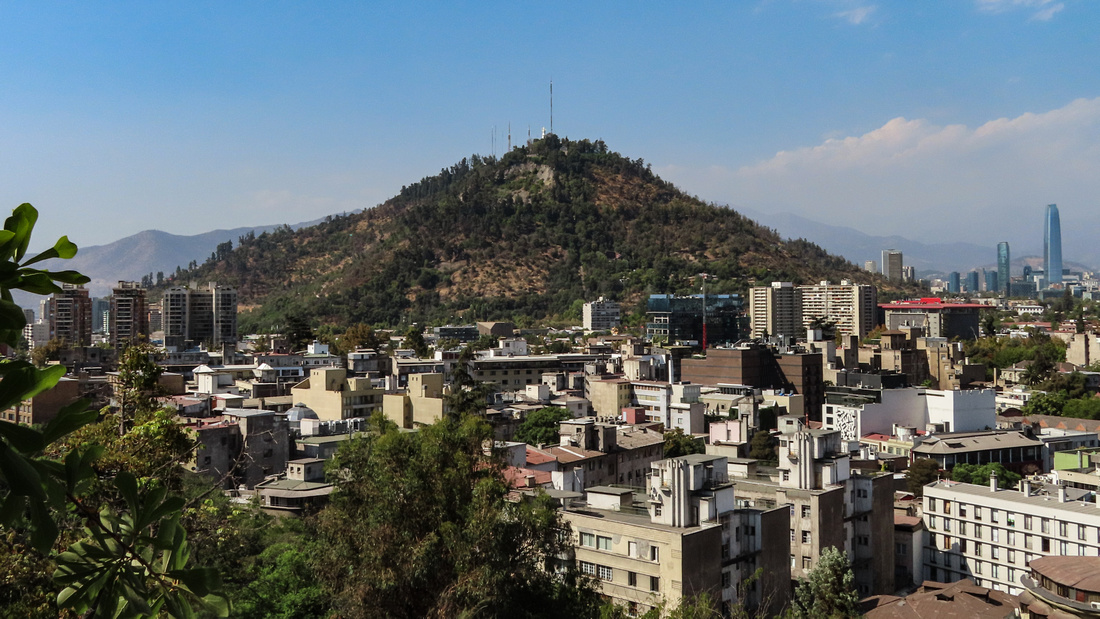 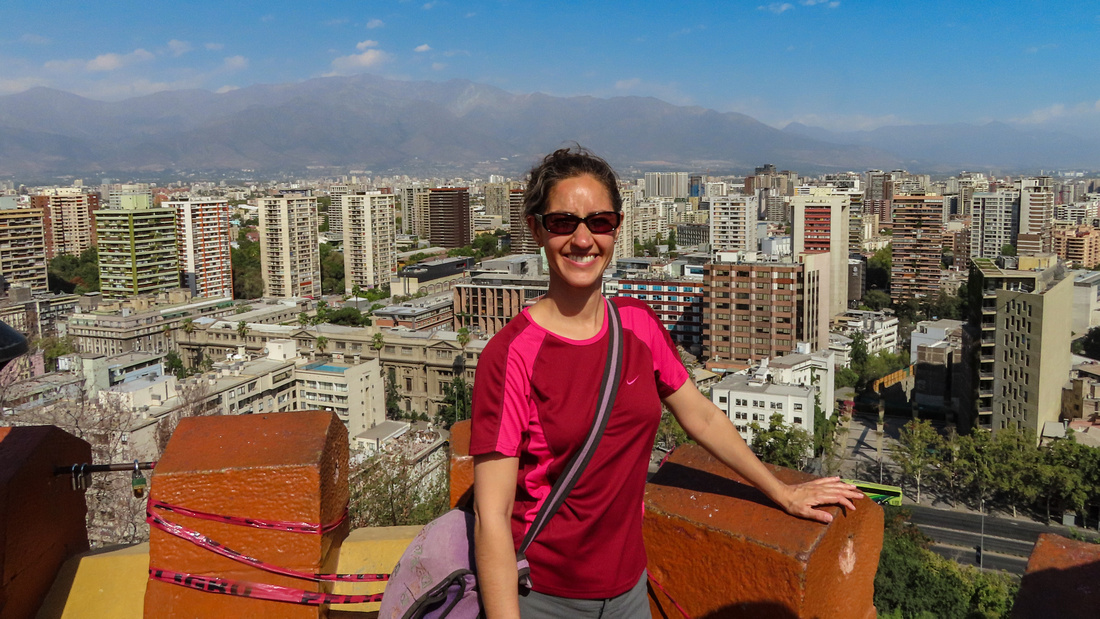 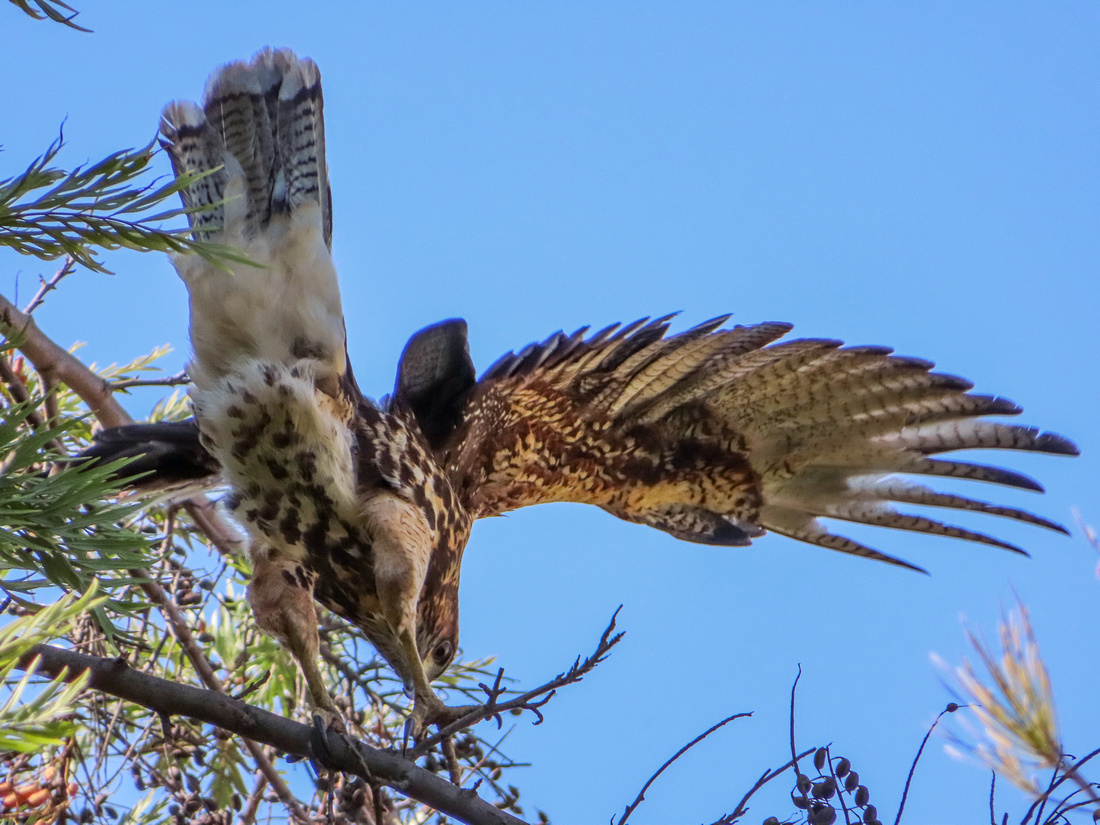 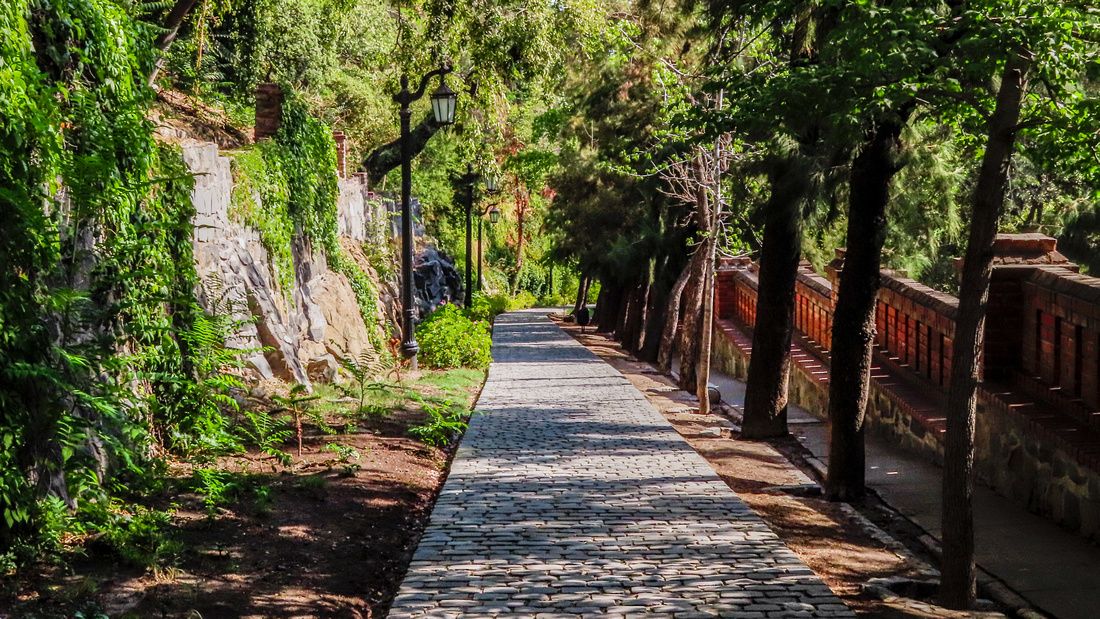 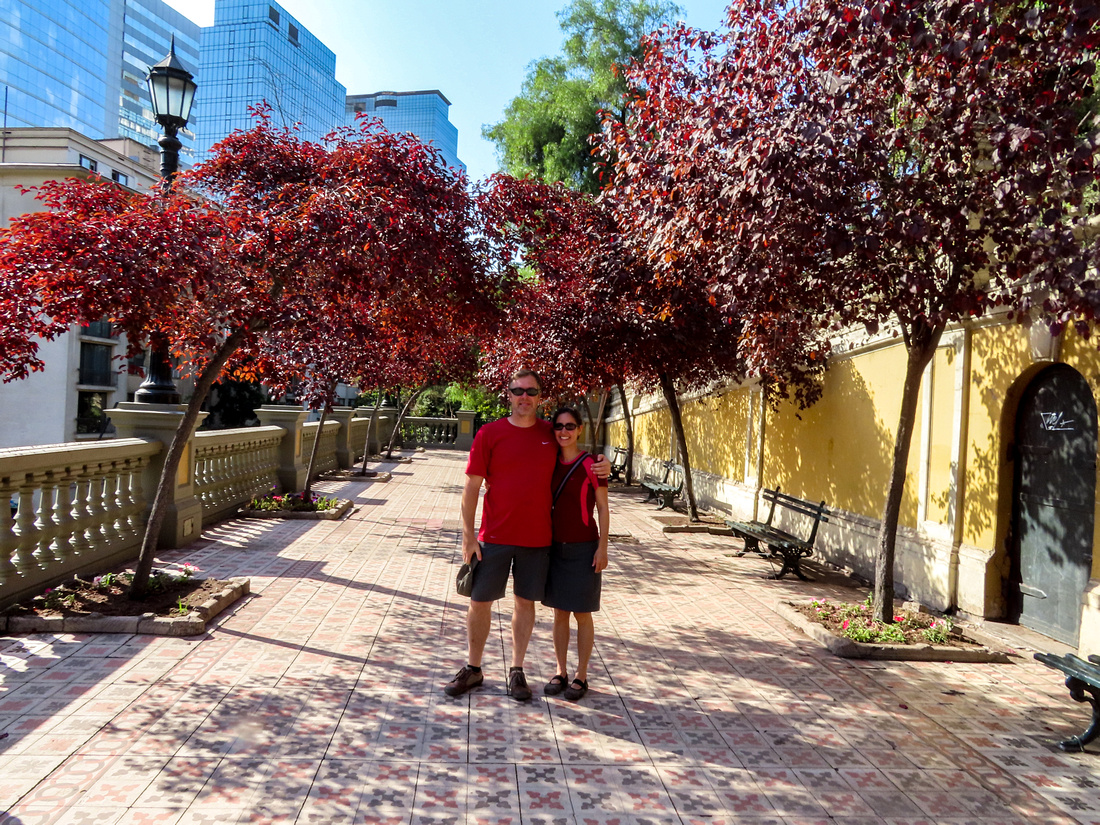 We did a walking tour of the city and learned a bit on the history of the city. When Valdivia arrived and wanted to conquer the city, he had to fight the Mapuche, the indigenous tribe. The Mapuche were very strong and Valdivia never actually defeated them. After each battle, Valdivia kept all the prisoners to help build a city. One time, he kidnapped a 10-year-old Mapuche boy. Valdivia trained this boy to ride a horse, to read and how to use arms. He thought the boy would help him defeat the Mapuche. But when the boy turned 15, he took horses and arms back to his tribe and created an army to fight Valdivia. Valdivia was captured, taken back to the tribe and never seen again. 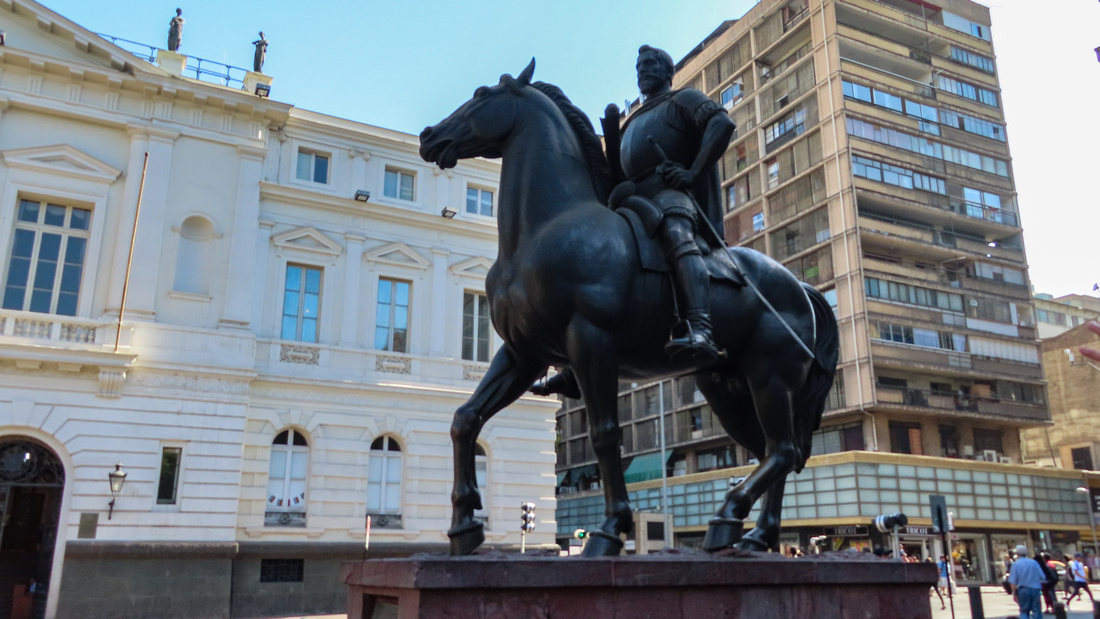 What’s in a name?

Where did the name Chile come from? We were told there are several options: 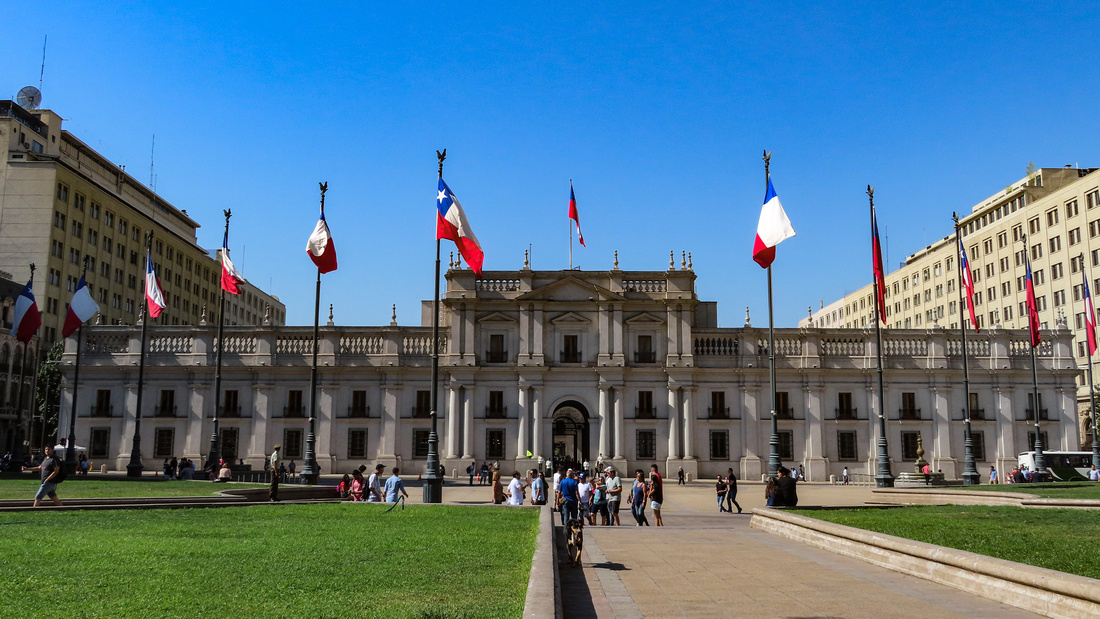 In 1810, Chile gained its independence and for the centenary the city officials set out to do big transformation of the city.  Everything that was non desirable to the eyes of the foreign visitors and everyone that they did not want “the others” to see was moved to the other side of the river. Today, this area is known as Bellavista. On the tour we were told that a week before the 100th year celebration the president died, then 4 days before the celebration the VP died from a flu he caught at the President’s funeral. No one wanted to step up to be president. Finally, Barros Luco took the position. According to our tour guide, he loved eating a meat and melted cheese sandwich and since that time, the sandwich is called Barros Luco and that’s the only thing this president is known for. We fact checked the story and it seems to be a tall tale, however you can still buy a Barros Luco sandwich today. 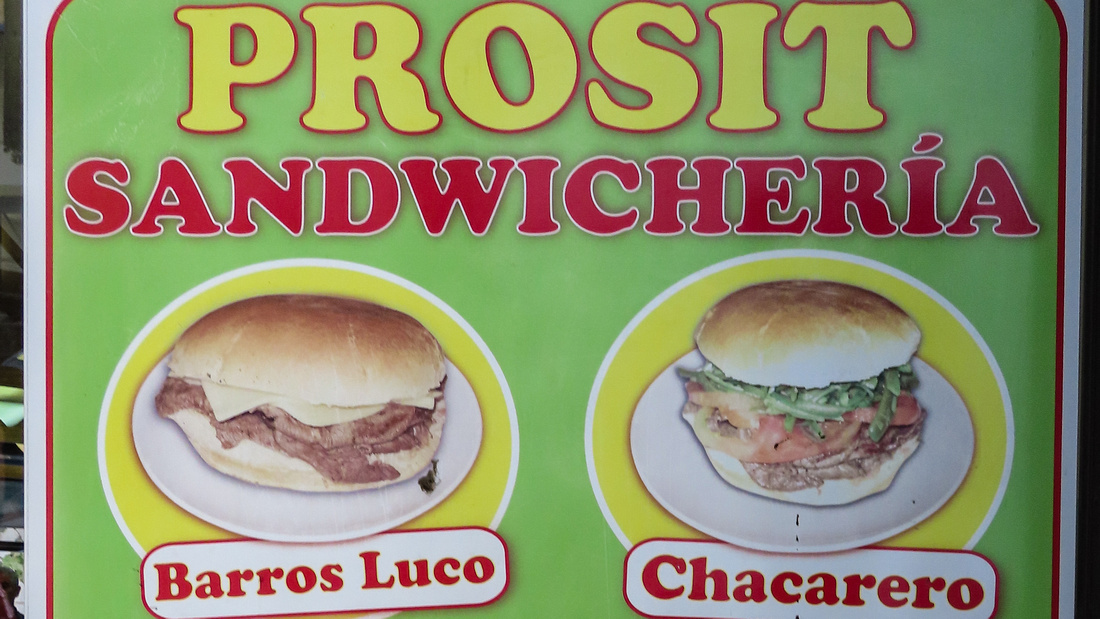 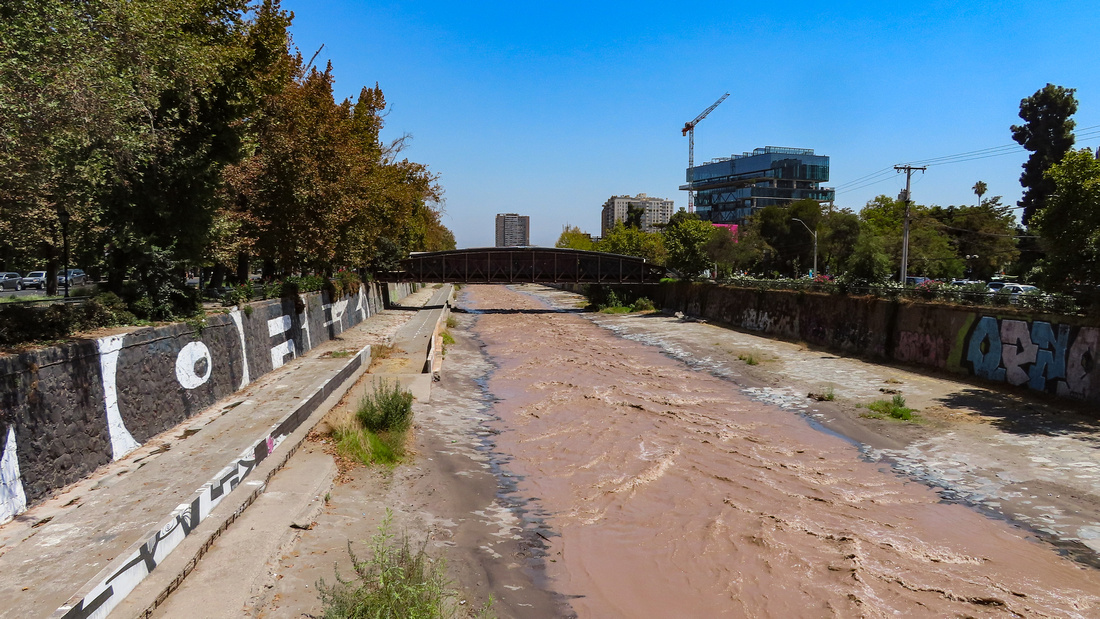 The Mapocho riverDivides Santiago in North/South. On the north shore is Bellavista.

Fast forward to 1970, the first democratically socialist president elected was Allende and he wanted to make dramatic changes by decreasing the gap between the poor and the rich, improve the education system, changes that could improve the lives of its citizens and much more. In 1973, he was taken down via a Military coup and Pinochet, head of the army, became the dictator from 1973 to 1990.  At the Museum of Memory and Human Rights we got to hear Allende’s last speech from the presidential office while the army was attacking. The museum was built to commemorate those that passed/ disappeared, and a way to learn about the history. 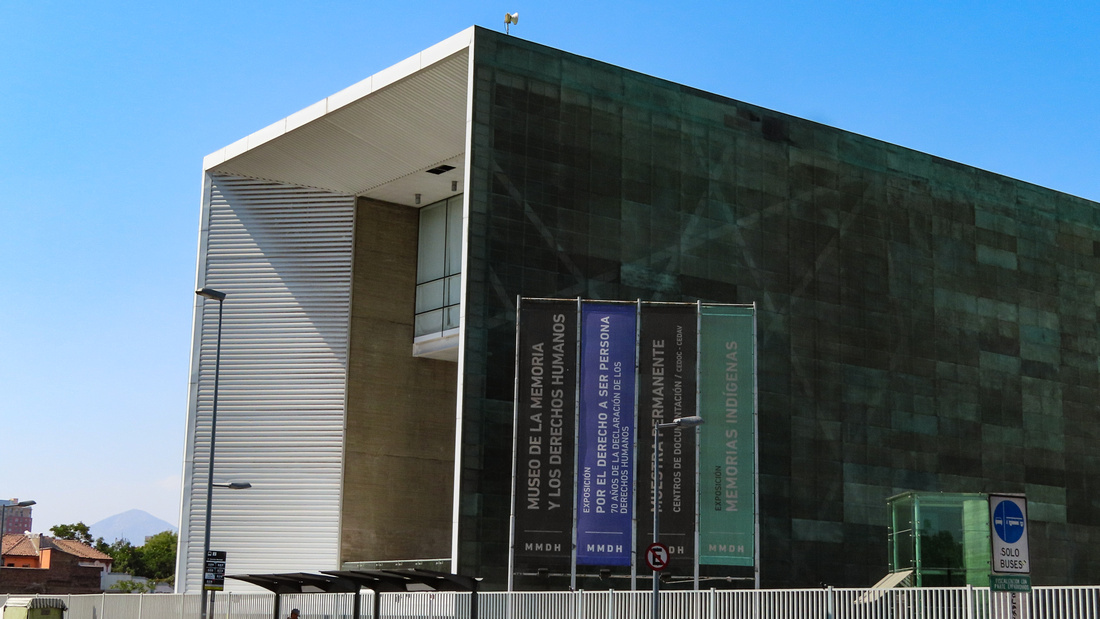 Museum of Memory and Human Rights

After our walking tour, we visited the house that Pablo Neruda built for his then mistress Mathilde. He called her La Chascona for her unruly red hair and this is what the house is known as today. It’s an intrigued house with a lot of charm, details and creativity. Built in Bellavista on a hill side you walk through the garden to get to the living room, the summer bar and the library. Neruda would later marry Mathilde and live with her until he died, just a few days after the coup in 1973. Many wonder if the cause of his death was indeed the prostate cancer he was suffering from or if he was poisoned by the Pinochet junta. Neruda was a leader for the communist party and a good friend of Allende, he was planning to go into exile in Mexico but postponed his trip 24 hours. He died after complaining that a doctor gave him a shot in the gut while he was asleep. In 2013 he was exhumed; no chemical poison was found but an international team of forensic experts did agree he did not die from cancer. 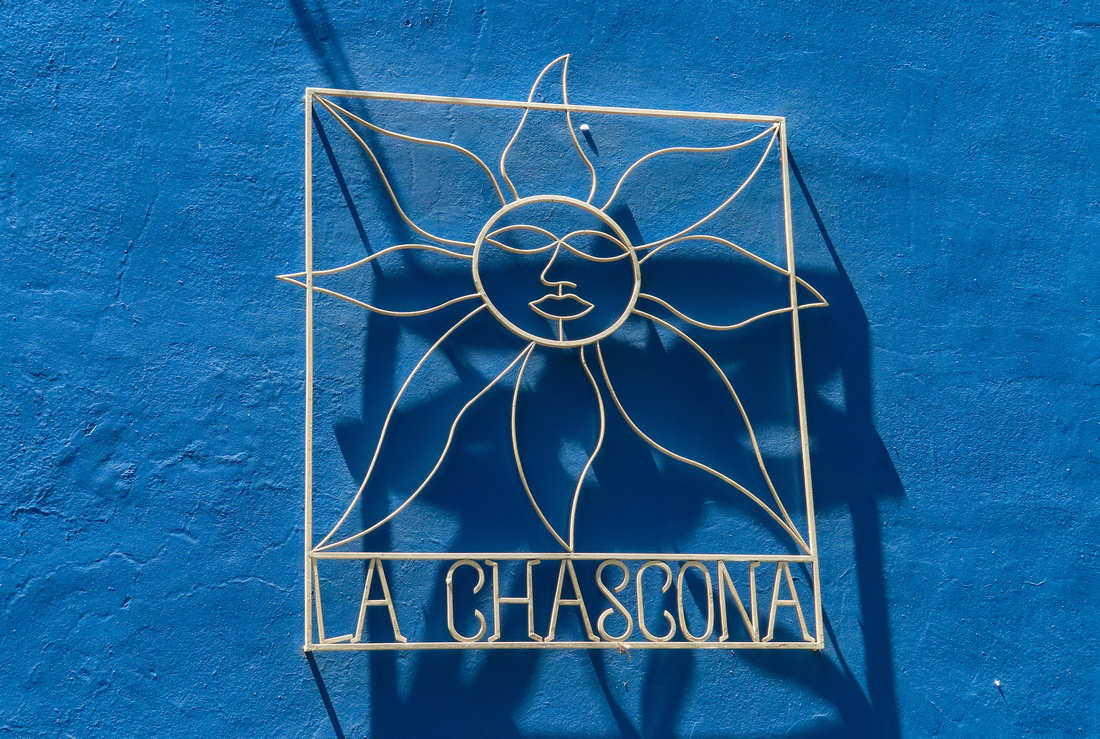 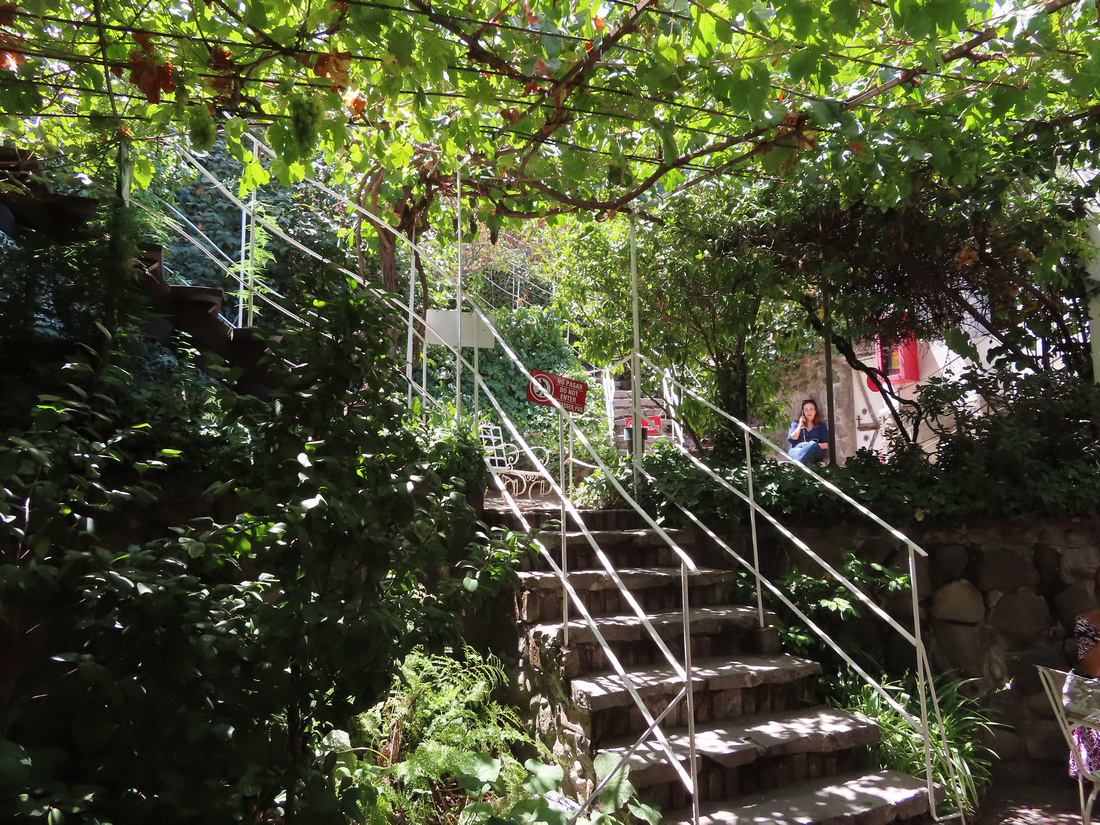 The grape court yard.One of the lovely courtyards in Pablo Neruda's house in Santiago 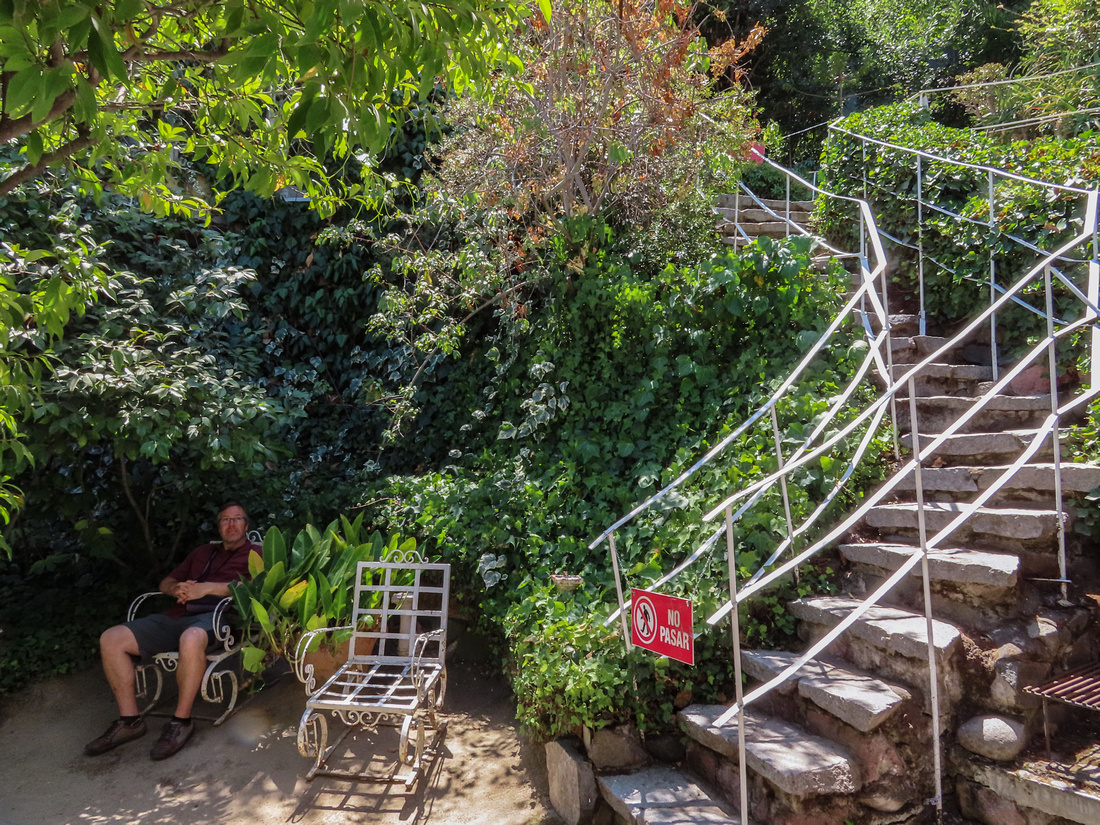 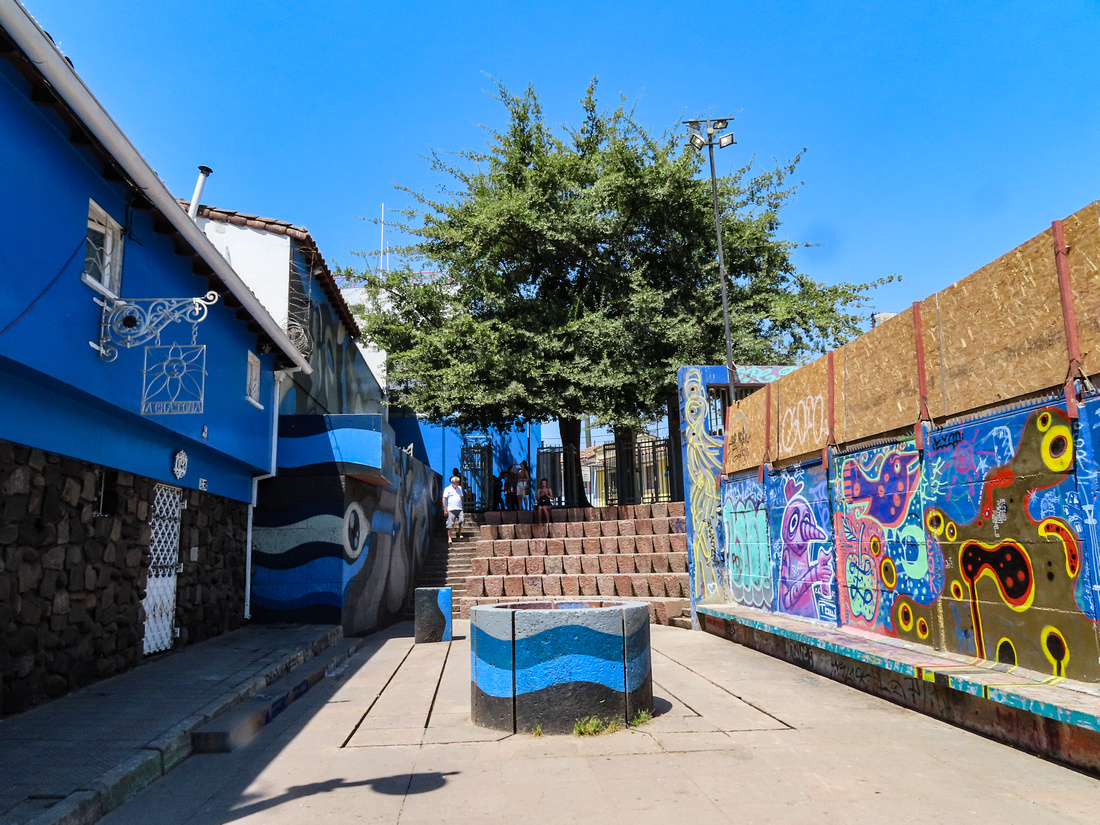 As we explored the city, we enjoyed Park Forrestal which has a nice collection of status given to Chile from foreign countries many for the 1910 centenary. The USA gave a bust of Lincoln maybe to recognize Chile’s early abolishment of slavery in 1823. In the US, it was abolished in 1865. 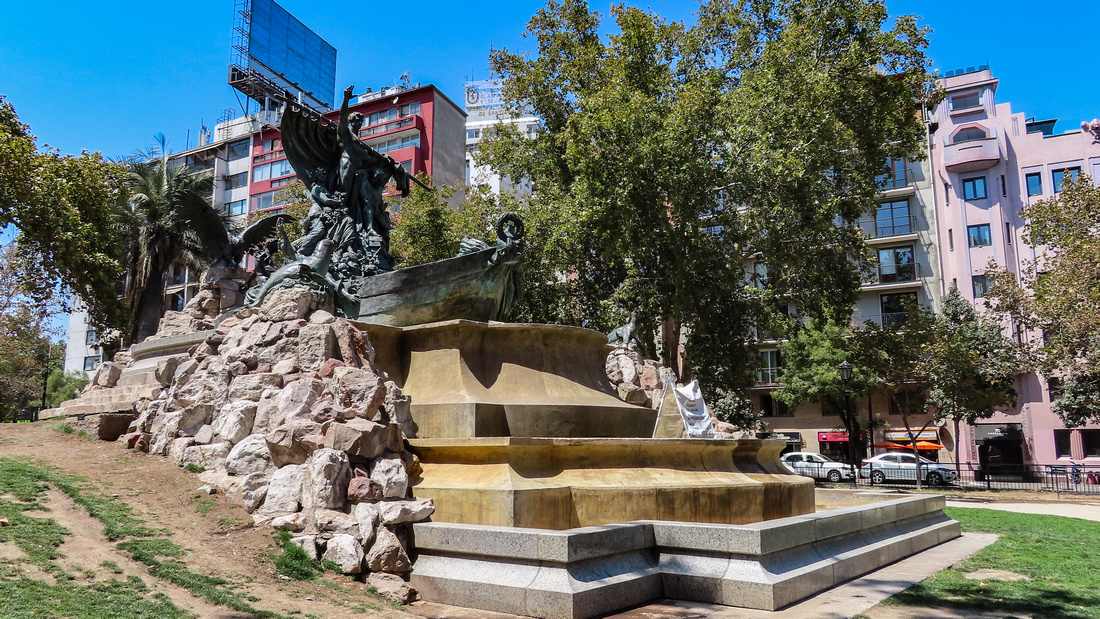 Germany's gift to the centenary in 1910.

On a Sunday among many bikers and hikers, we walked up to the Cerro San Cristobal. It was hot, crowded but very interesting to see. On top there is a church, a large statue of the Virgin Mary and tourist shops but we enjoyed the panoramic view of the city. In the 35C / 95F we felt lucky that we had the option of taking the funicular back down. 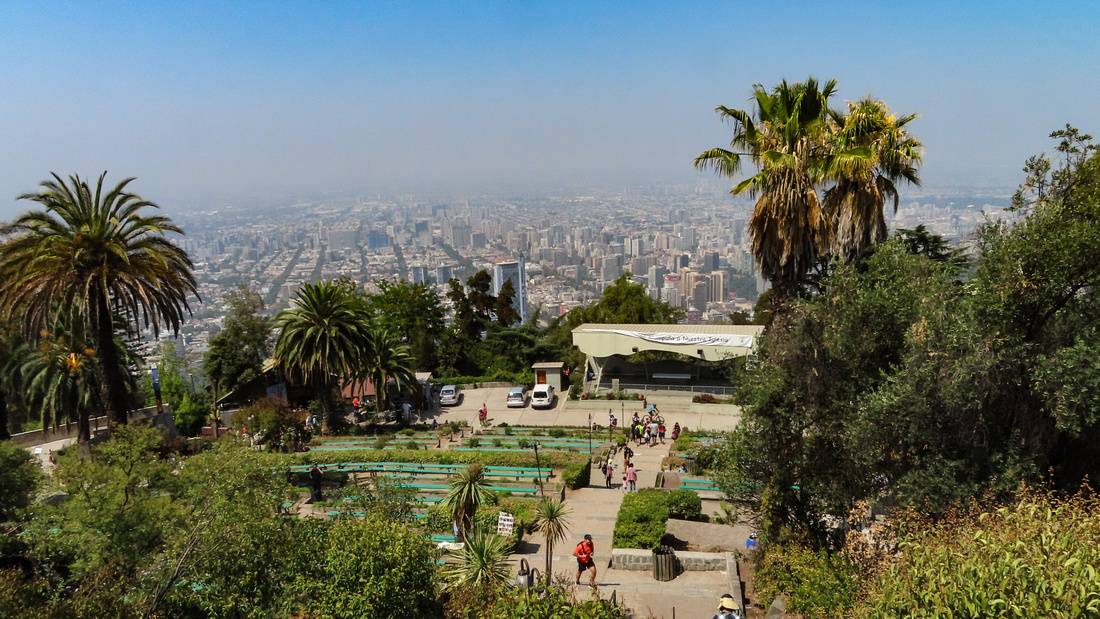 Cerro San CristobalSmog is a big problem in Santiago. Especially in the winter. Luckily we were there in their summer months 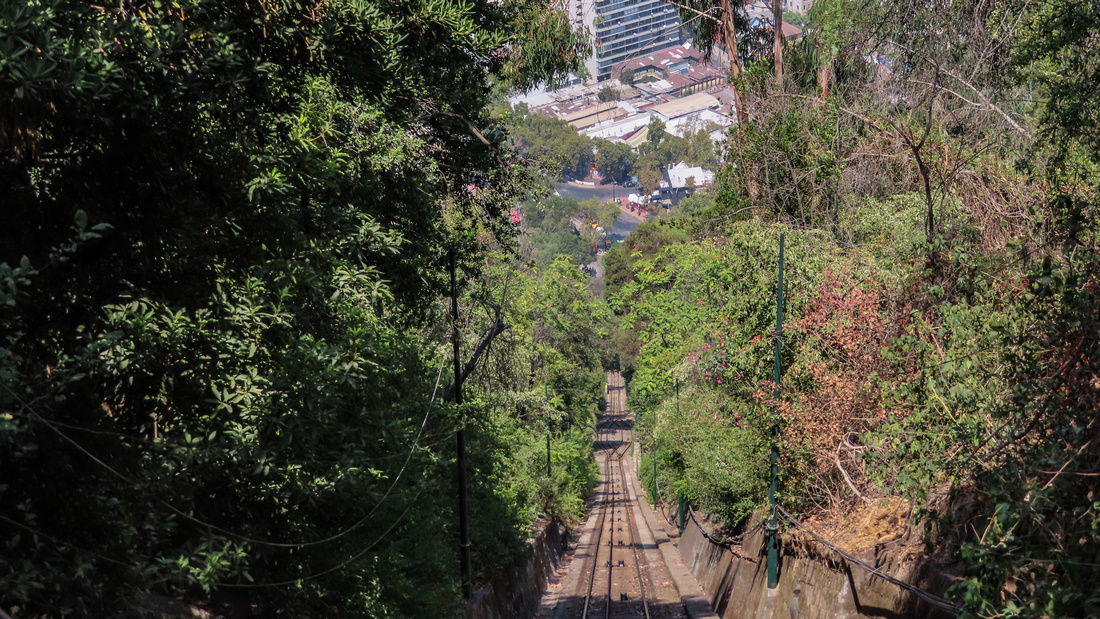 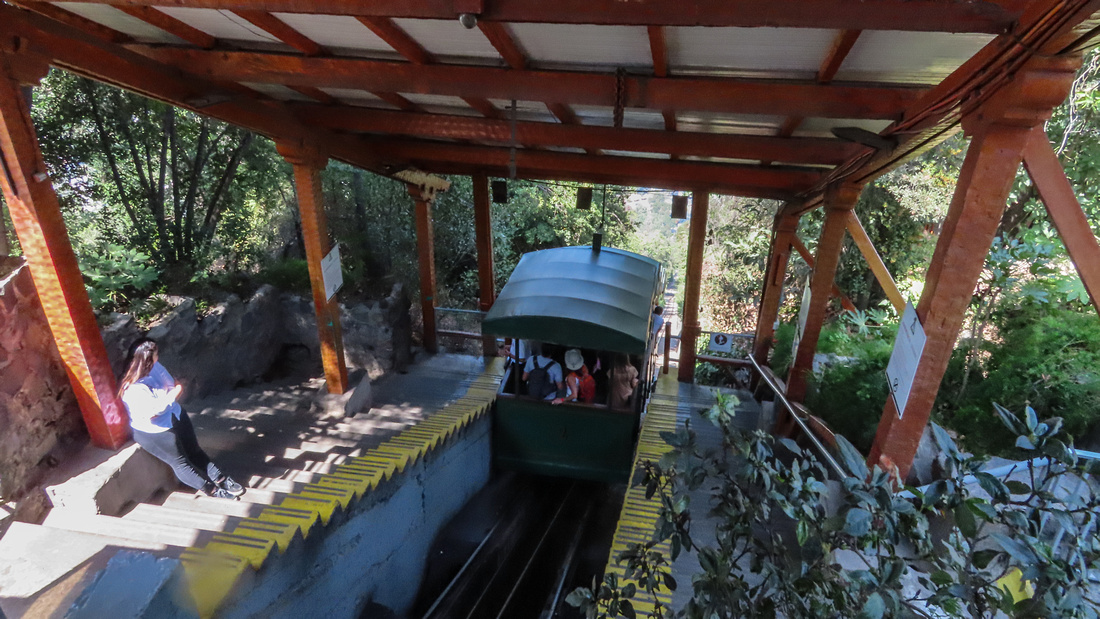 Our way back downCerro San Cristobal

We also discovered a hidden gem inside the National History Museum.  You can climb up the clocktower and have a nice view of the Plaza de Armas. 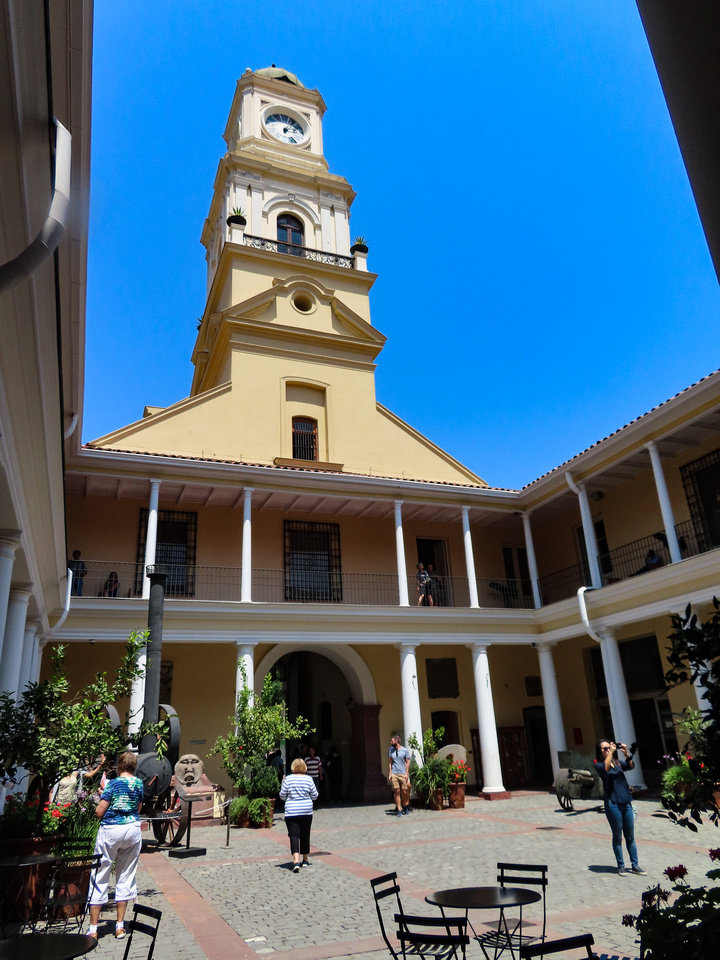 The clock tower in the National History Museum 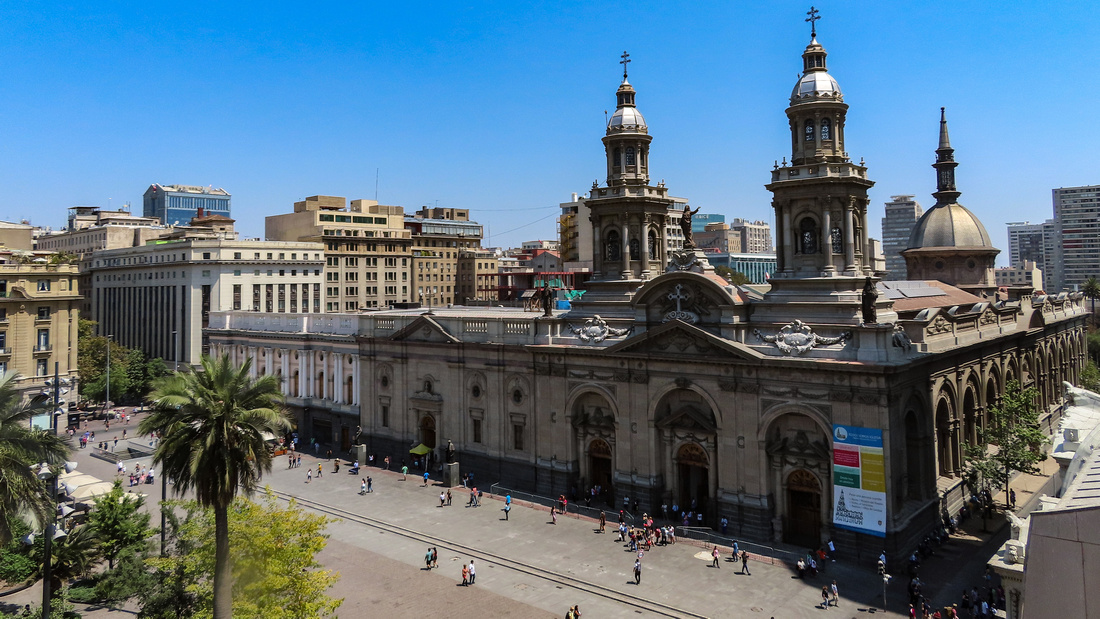 View from the clock towerThe cathedral at Plaza de Armas

During our stay we had the great pleasure to meet with Paola that used to live in Houston, and we had not seen each other in about 8 years. It was really nice to see her, catch up, hear her story about Santiago and meet her sweetheart, Aldo. We hope our paths will cross again. 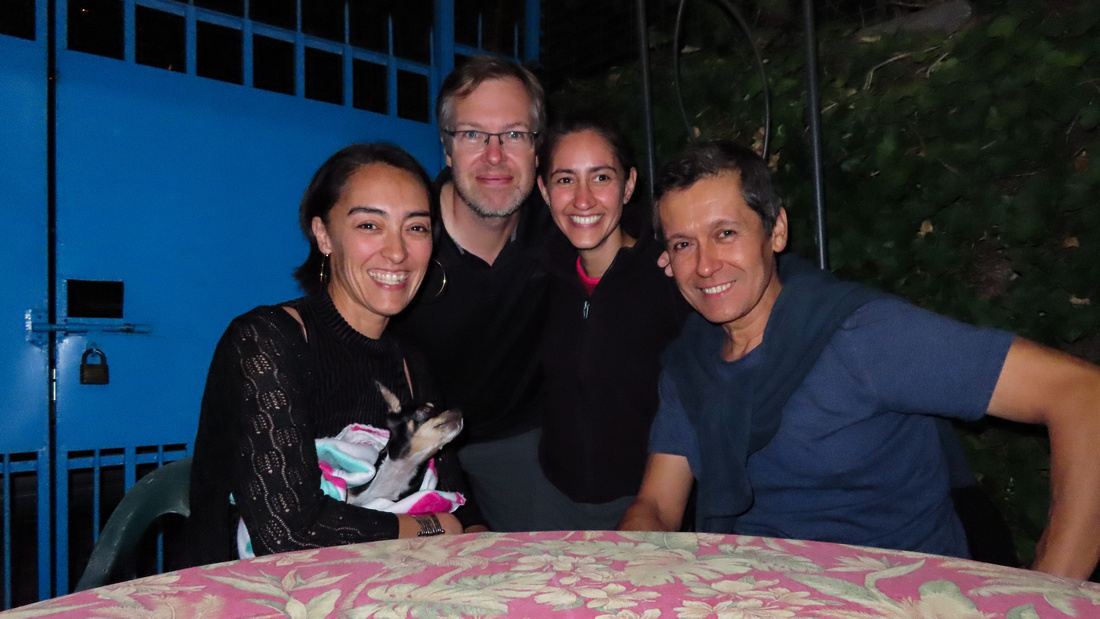 With Paola, Aldo and the chihuahua Lucky

All pictures by Vanessa

Mouse over for captions